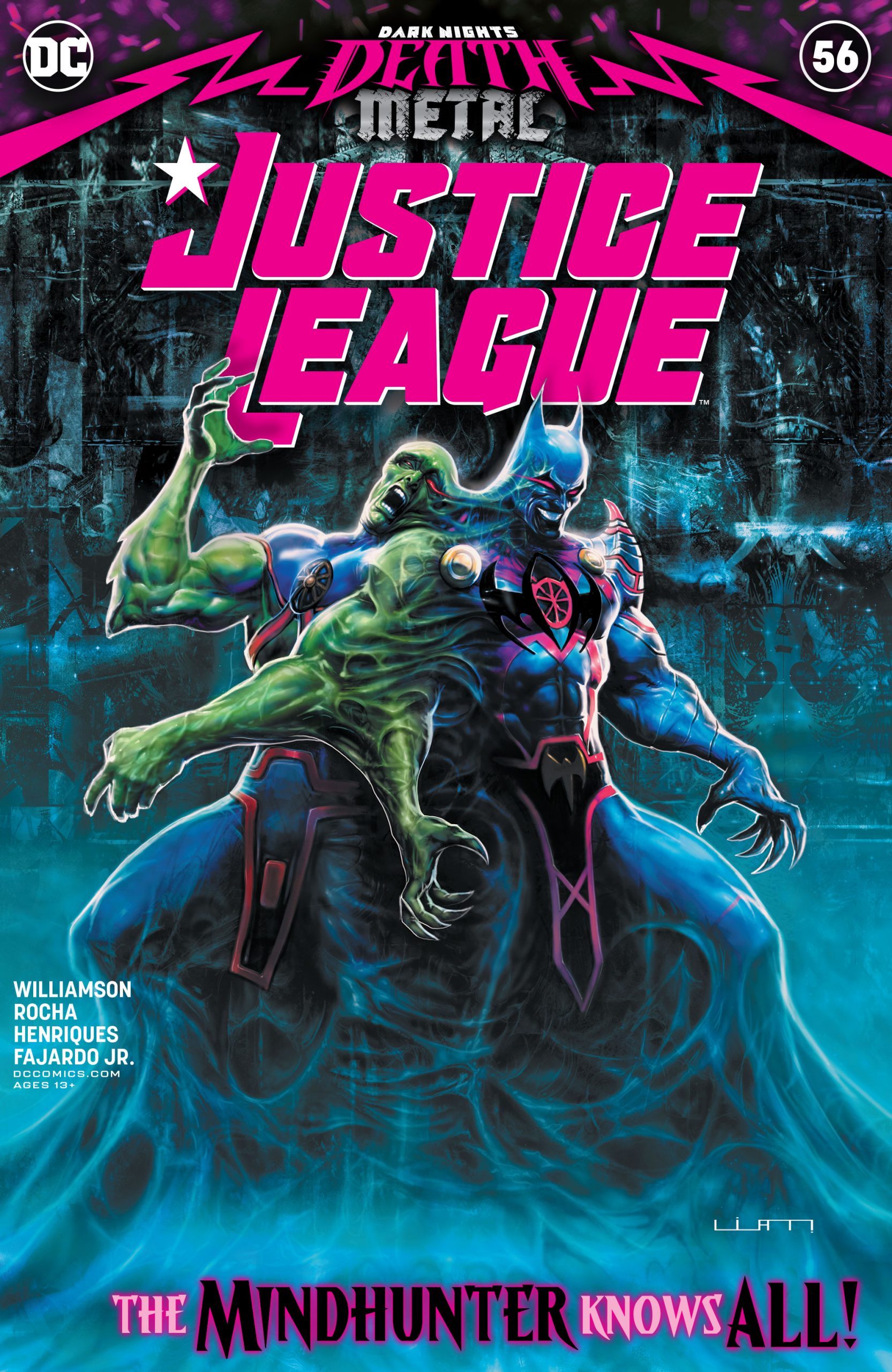 Nightwing and company stare down the death ray of the Omega Knight, while Hawkgirl comes face-to-face with a warped version of her lost love in this week’s Justice League #56.

Nightwing and his rag-tag band of Titans and Leaguers have almost made it to Perpetua’s throne. Led by villain-turned-ally Lex Luthor, the team’s goal is to free the Legion of Doom. However, upon their arrival, they are met with a giant guardian: Perpetua’s Omega Knight.

Elsewhere, Hawkgirl has sensed the presence of the Martian Manhunter. After honing in on his psychic signature, she discovers it was a trap. Instead of finding the Martian Manhunter, she is met by the Mindhunter: a version of Batman from the Dark Multiverse who has merged with his Earth’s J’onn J’onzz.

Joshua Williamson has finally kicked this story into fifth gear, as Justice League #56 is an incredibly powerful and emotional issue. Without giving away any major spoilers, I will say that there are two characters whose arcs comprise the emotional core of this issue: Detective Chimp and Hawkgirl. Williamson harnesses each of these characters’ loss of, and longing for, relationships as fodder for an explosive issue. All of the groundwork that he laid in the previous chapters comes to fruition. The payoff is pretty solid, and the cliffhanger is amazing. 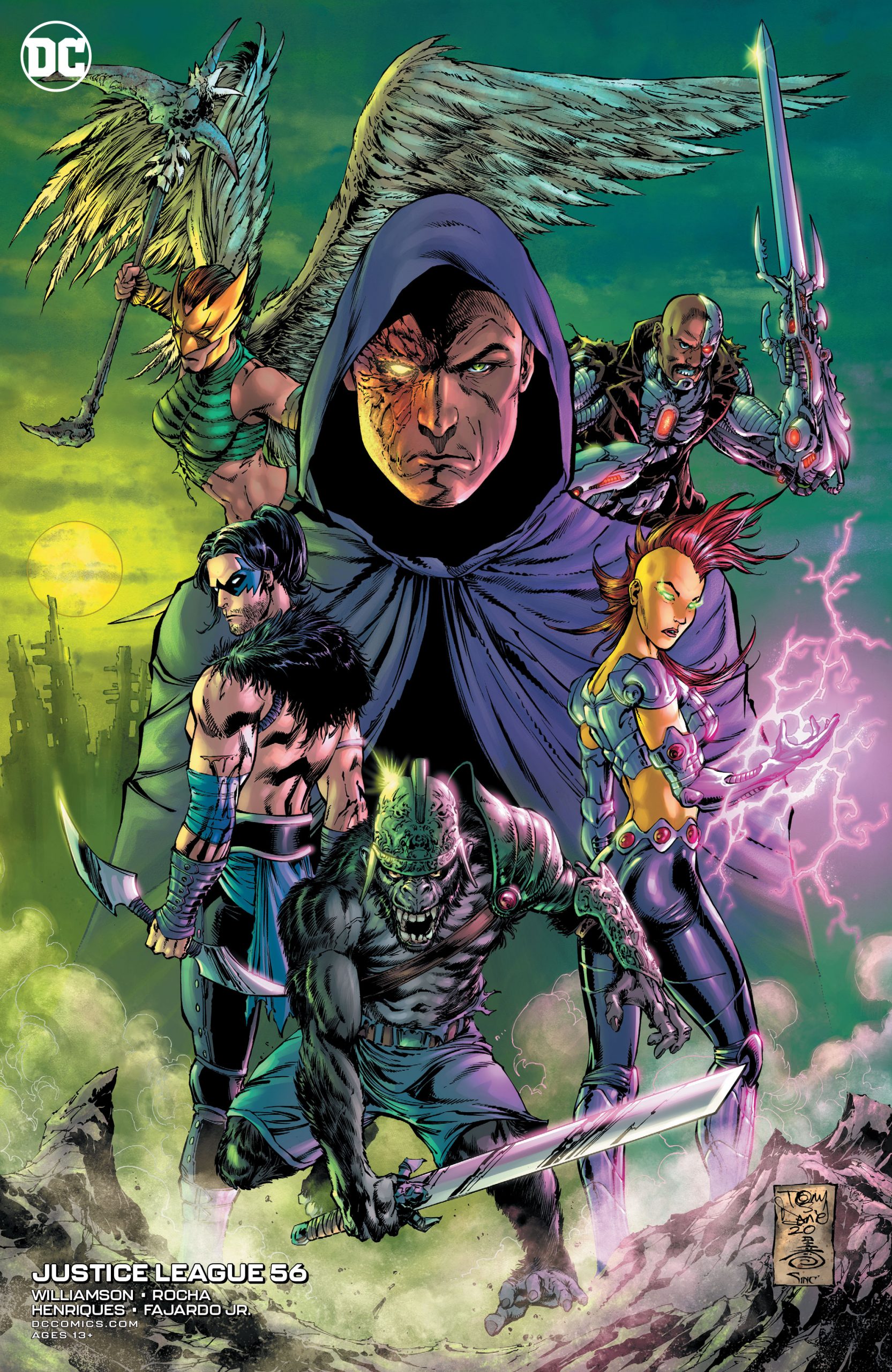 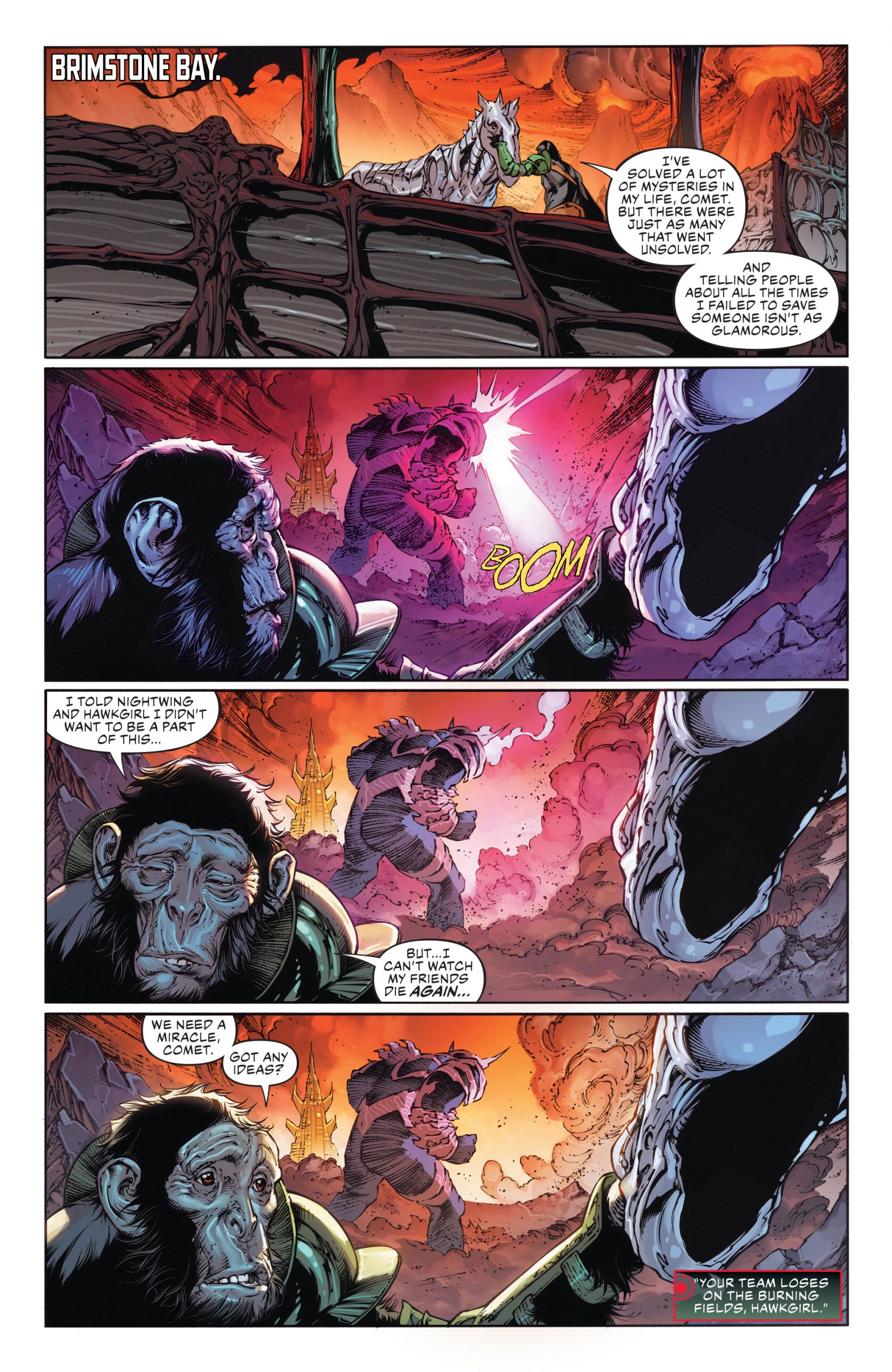 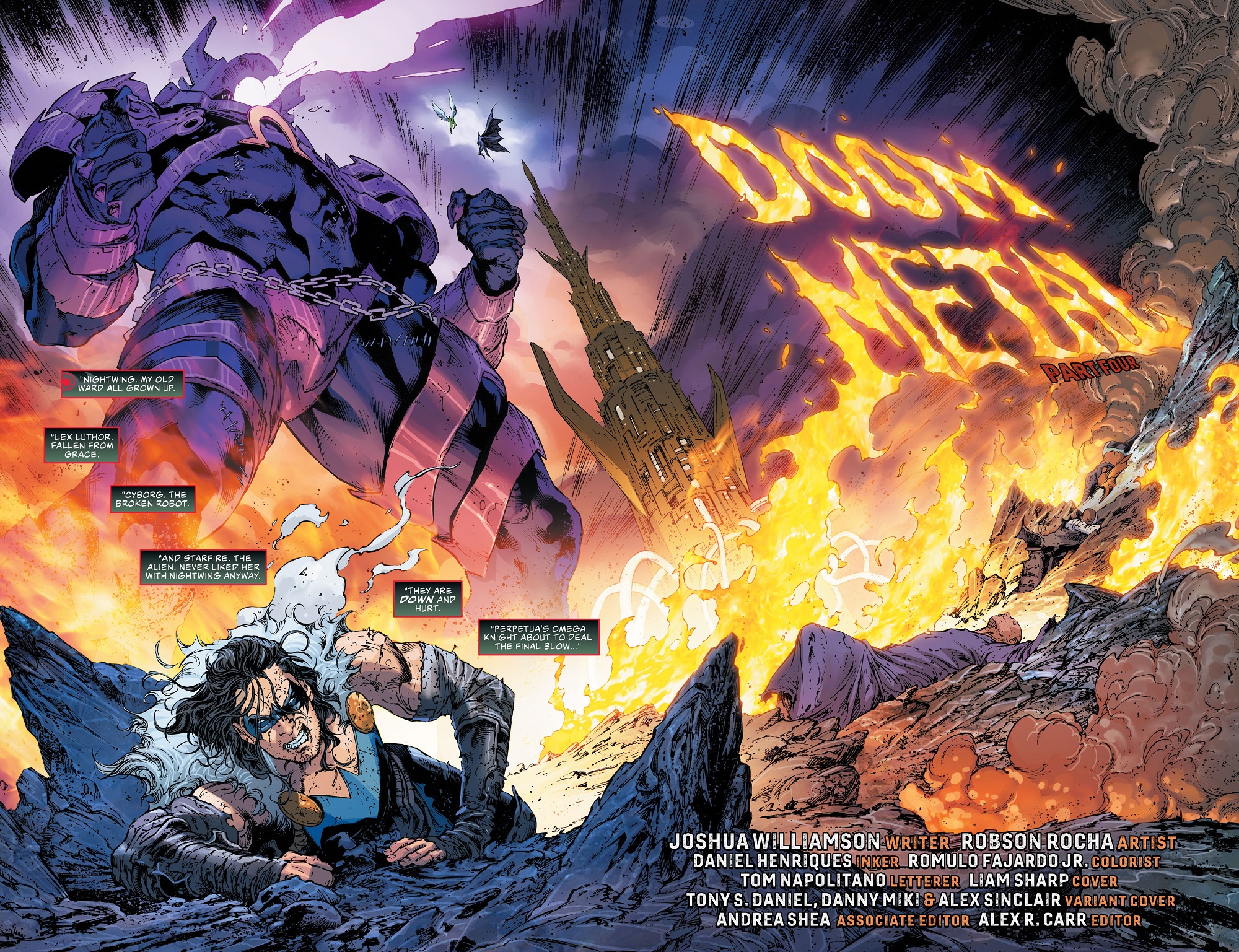 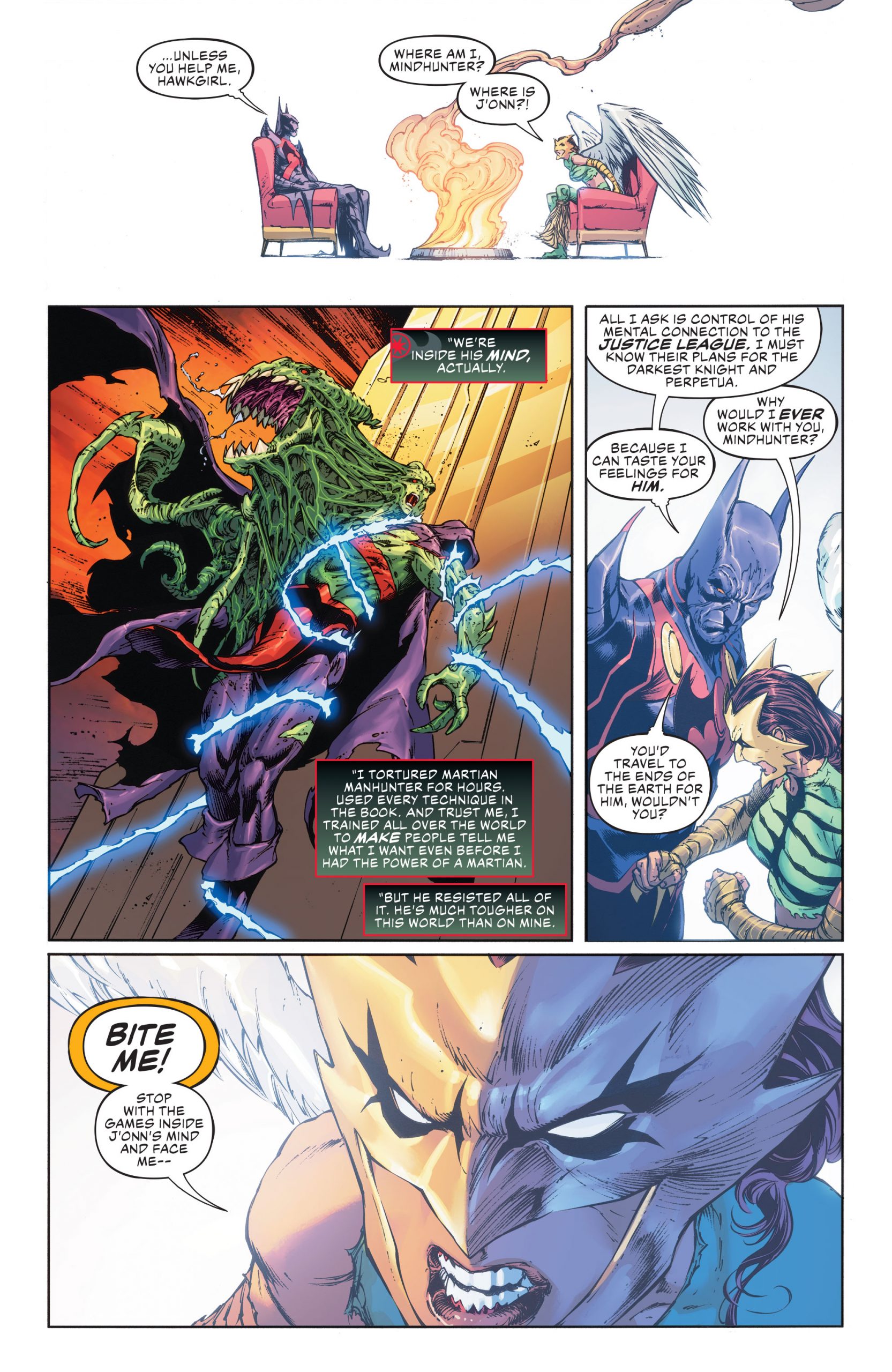 Robson Rocha is once again on art duties, which is very much a boon. While his pencils are impressive, what really stands out in this issue is his paneling. If you’ve spent any time reading my reviews, you’ve probably picked up that I’m a sucker for a well-paced comic. I love how Rocha layers his panels on top of other panels. By doing so, he plays with the page’s gutter thereby utilizing what would be negative space in an economic and creative fashion.

Aesthetically, not only does this make his panels pop, it also aids in the transitions between them. The overall effect aids in the issue’s pacing, as the eye naturally moves from one scene to the next in a very natural and organic manner. In short, it’s a beautiful and elegant visual storytelling device. Daniel Henriques’ inks are also pitch perfect.

Justice League #56 is a fantastic issue. Williamson has “fixed” his pacing issues, as this issue’s script really fires on all cylinders. Rocha also brings his A-game, creating a beautiful issue that’s extremely well-paced. This issue is very much an improvement over the previous two instalments.

Final Verdict: You might want some tissues for this one… all the feels.