A Dispatch From Isolation

That’s the name of the recent Robert Pattinson interview with Zach Baron for GQ, with Pattinson providing his own photography for the article.

Our newest Batman seems to be going through some isolation anxiety considering his alter-ego of Bruce Wayne is somewhat of a loner.

Baron offers that Pattinson is in London with his girlfriend, in the apartment the Batman folks rented for him. Still eating meals the Batman folks are providing, though the other day he got nervous, that they might just stop or forget. Or were the owners of his apartment going to need it back? He’d come to London with, like, three T-shirts. The rest of his stuff, he says, is in his place in Los Angeles, where he actually lives.

His internet in London is in and out. His laptop mostly isn’t working. He has two phones, one of which is getting reception, and so the whole system is now running off whatever two or three bars that one phone is getting when he can find it:

Every internet device is operating on this 3G, like, iPhone 4. 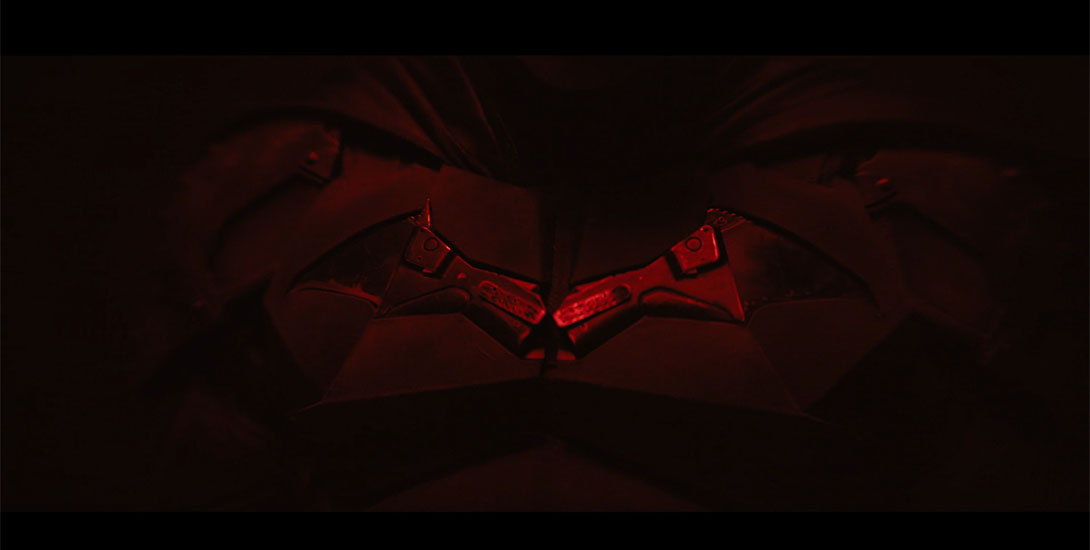 A “Not So Buff” Batman

The film studio hired a trainer who left Pattinson with a Bosu ball, a single weight, and a sincere plea to use both, but right now, he says, he’s ignoring her. He said to GQ:

I think if you’re working out all the time, you’re part of the problem

By “you” he means other actors.

You set a precedent. No one was doing this in the ’70s. Even James Dean—he wasn’t exactly ripped.

He says that back when he was the star of the Twilight franchise:

But Batman is Batman. Pattinson called another actor on the film, Zoë Kravitz, the other day, and she said she was exercising five days a week during their exile from set. Pattinson, however: 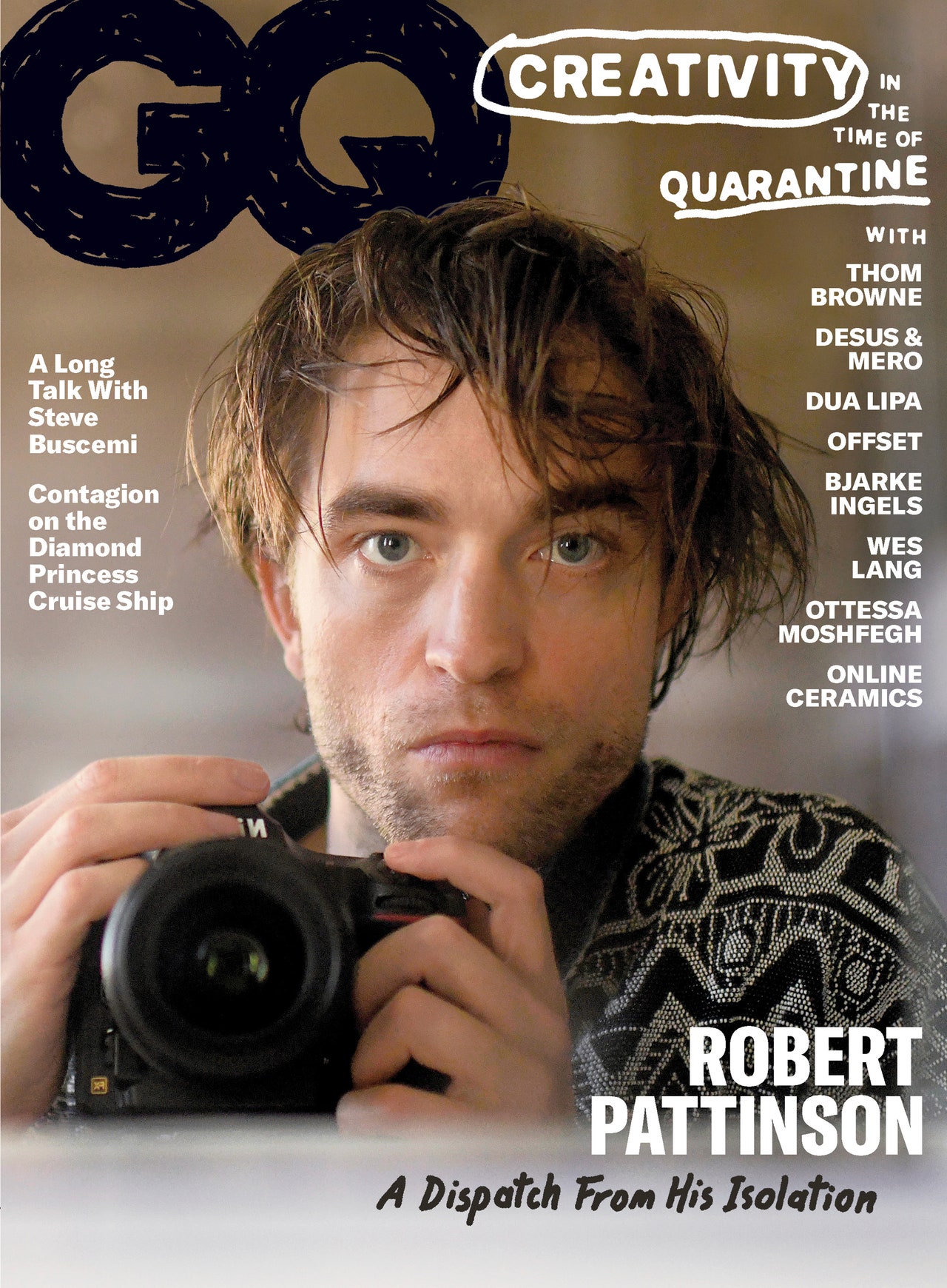 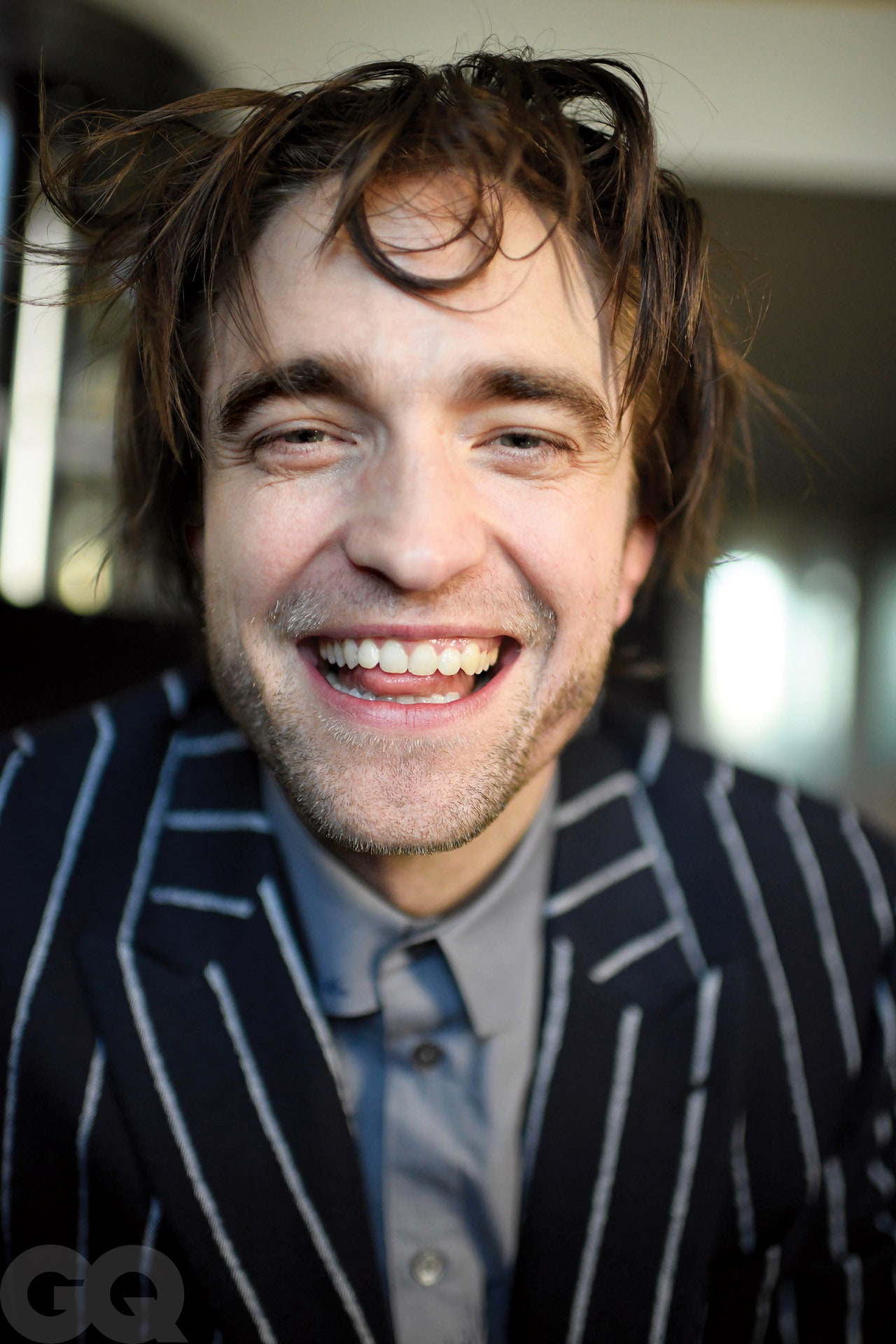 One Project On The Way….

Pattinson has Tenet, directed by Christopher Nolan, which is supposed to come out in July. He also has a smaller movie, the Gothic noir The Devil All the Time, that will be released on Netflix this fall. The Batman was supposed to come out summer of next year but has already been moved to October 2021. After years of avoiding big-budget films and the spotlight that comes with them, Pattinson was in the midst of making a few giant movies in a row. Then the world stopped, and with it his ambitions, tentative though they are or may have been. Still, he’s been fortunate enough to ride out this peculiar experience unscathed, at least so far. He’s been fortunate enough to know how to be alone as well as a person can know how to be alone.

What he hasn’t figured out yet is how to do anything else, like go outside:

I went for a run around the park today. I’m so terrified of being, like, arrested. You’re allowed to run around here. But the terror I feel from it is quite extreme.

He’s nervous that way. Just going back into the world, whenever the world finally comes back? That might be the hard part. 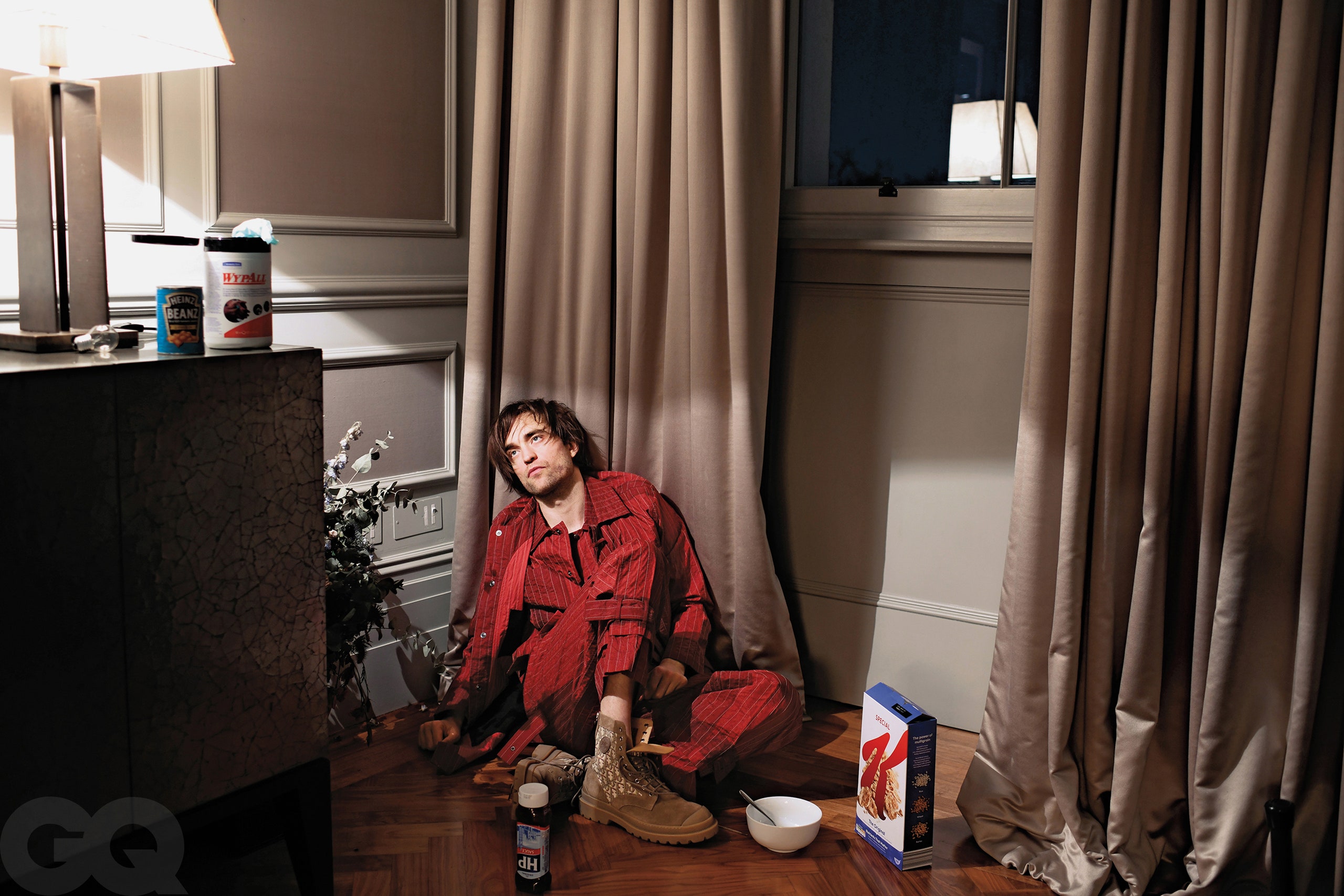 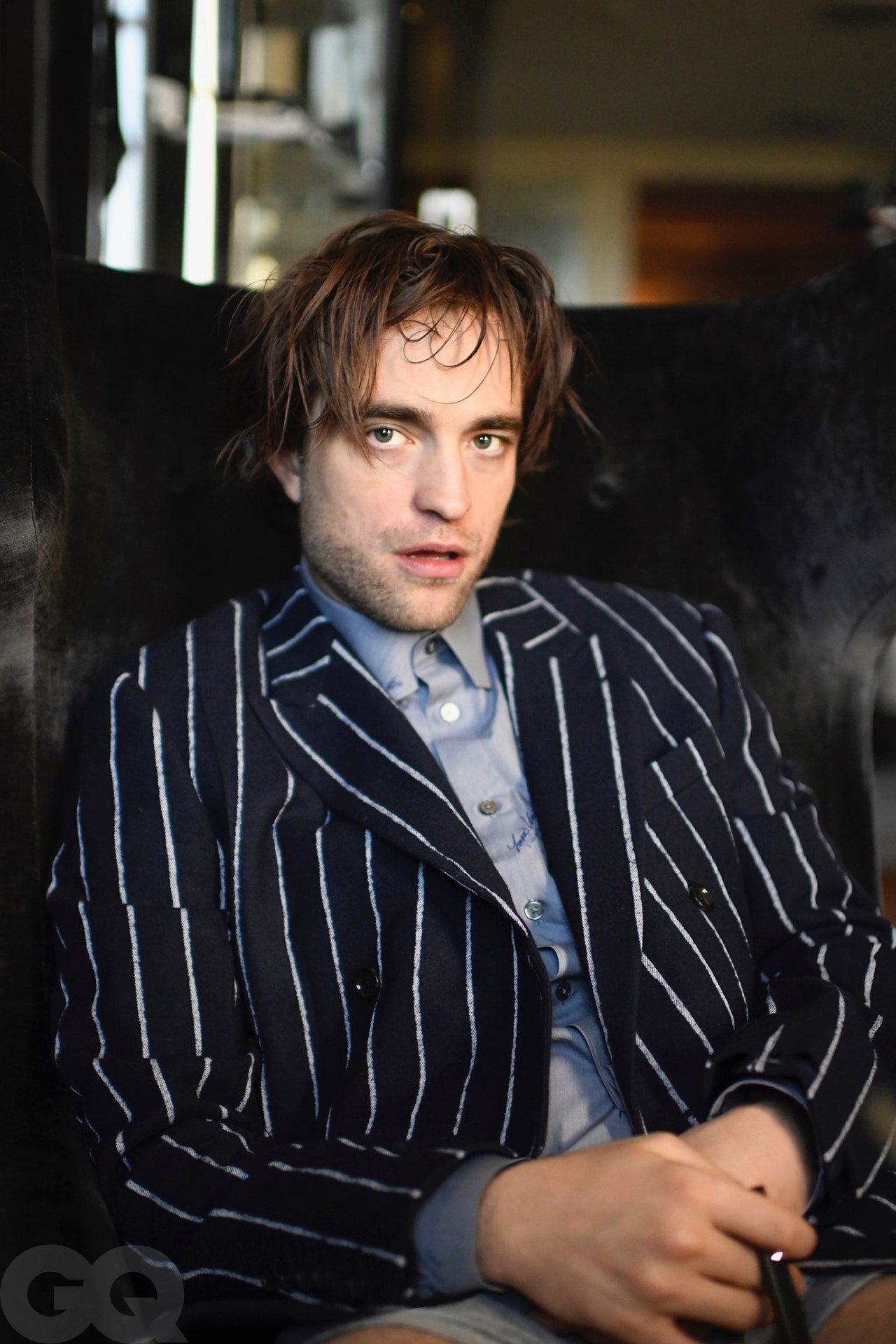 What Does the Bat Kitchen Look Like These Days?

In the GQ interview, Pattinson spoke about his diet:

I’m essentially on a meal plan for Batman. Thank God. I don’t know what I’d be doing other than that. But I mean, yeah, other than – I can survive. I’ll have oatmeal with, like, vanilla protein powder on it. And I will barely even mix it up. It’s extraordinarily easy. Like, I eat out of cans and stuff. I’ll literally put Tabasco inside a tuna can and just eat it out of the can.

A Reflection on His Bat Predecessors

Zach Baron, GQ interviewer, questioned Pattinson on the list of why to take on the mantle of the Bat and why one would not….especially after coming off a project with Christopher Nolan who was iconic in the past Batman movies.

I think sometimes the downsides—which I’ve definitely thought about—the downsides kind of seem like upsides. I kind of like the fact that not only are there very, very, very well-done versions of the character which seem pretty definitive, but I was thinking that there are multiple definitive versions of the character. I was watching the making of Batman & Robin the other day. And even then, George Clooney was saying that he was worried about the fact that it’s sort of been done, that a lot of the ground you should cover with the character has been already covered. And that’s in ’96, ’97?

Then there’s Christian Bale, and Ben Affleck’s one. And then I was thinking, it’s fun when more and more ground has been covered. Like, where is the gap? You’ve seen this sort of lighter version, you’ve seen a kind of jaded version, a kind of more animalistic version. And the puzzle of it becomes quite satisfying, to think: Where’s my opening? And also, do I have anything inside me which would work if I could do it? And then also, it’s a legacy part, right? I like that. There’s so few things in life where people passionately care about it before it’s even happened. You can almost feel that pushback of anticipation, and so it kind of energizes you a little bit. It’s different from when you’re doing a part and there’s a possibility that no one will even see it. Right? In some ways it’s, I don’t know… it makes you a little kind of spicy. 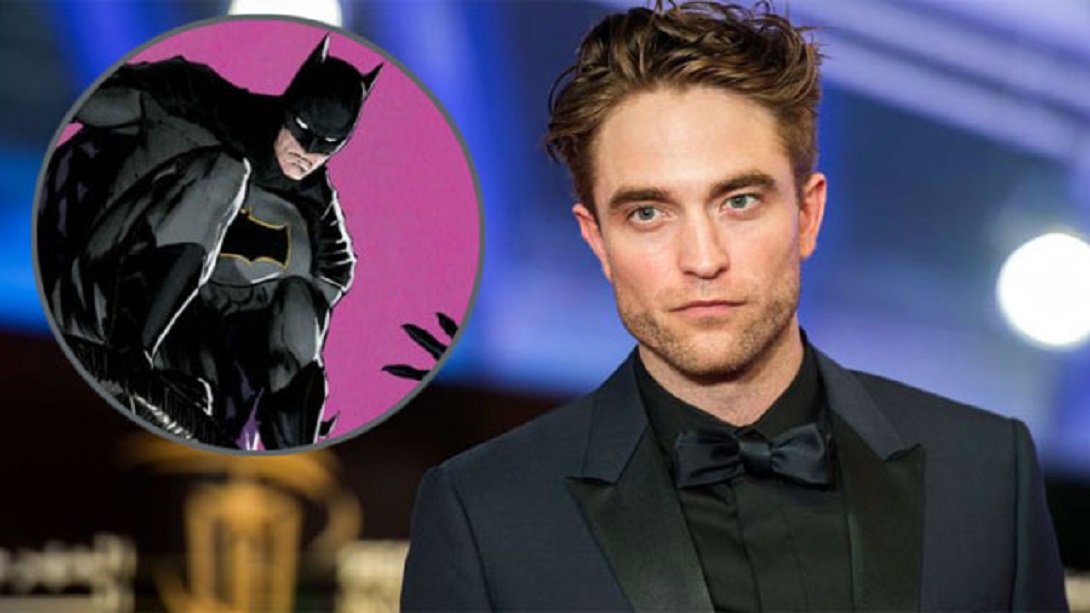 Magazines like GQ and Rolling Stone always provide some very eye-opening interviews of iconic social figures, and this one delivers as well.  However, some responses seem to reflect that the isolation of Pandemic may be contributing to our newest Batman taking on a more “Joker” feel.

Joaquin Phoenix hit his portrayal of the Joker out of the park (rivalled or possibly eclipsed by Heath Ledger). Perhaps this new isolation will give us a true “Bruce Wayne”.

In the mean time, I hope Pattinson hits the exercise route a bit more.  I cannot imagine a sleeker Batman, then again, it’s a new world.

Read the whole interview in the latest GQ.