With the Batman: Hush movie being released on Blu-ray and DVD, those involved have been talking about this highly anticipated movie. Based on the 2002 – 2003 Batman run from Jeph Loeb and Jim Lee, screenwriter Ernie Altbacker admits the difficulty in getting this 12-issue run into a 75 minute animated movie. However, he did see an opportunity to surprise fans of this highly valued story:

I love the entirety of Batman’s “Hush” arc, but we had to get it down to 75 minutes and it turned out to be 80 minutes or so.  We were going to have to lose things and so it was really hard.  People were like “That’s my favorite scene, we can’t lose it”, but by changing a couple of things some scenes fell out and enabled us to keep everything we loved about Hush and the tone of it, but make something that was animate-able.  Because of the problem we had with length I was looking for places where in the story there are a lot of red herrings, and I was like “What would happen if one of these red herrings was the way we go and we can totally fake out the fans?”

Justin Copeland, who made his directorial debut with the Batman: Hush movie, after working as a storyboard artist since 2012 said:

I was on Reign of the Supermen at the time, I was the head of story. They came in and said they were going to give me Hush, and I was like ‘What, oh my God’.  I had to sell it because for me it was like a full circle moment. Starting with the comic, I was trying to break into comics at the time, with the late nights staying up drawing. Then finally to get this as my directorial debut at WB was awesome.

Copeland got his show after working alongside long-time Warner Bros. director Sam Liu and after story-boarding The Killing Joke.

I started with Killing Joke. I was one of the board artists on Killing Joke. Then they were like ‘Bruce [Timm] really likes your work on Killing Joke,’ and I was like ‘Cool. I want to be a director, that’s my goal is to direct.’ Sam [Liu] brought me under his wing. He made me his head of story, and just kicked the crap out of me until I learned.

Now that Batman: Hush is out to buy, Copeland has another Batman adaptation he would like to take on:

One of my favorite series that we’ve done from a while ago was “No Man’s Land.” That (version of) Batgirl is one of my favorite characters. But we serve to the president. So, whatever they tell me that’s what I got to do, but that’s the dream. What would be dope is if we did it like a Spider-Verse feature – that could be next level. They know I want to do that. I stopped bothering them about it, but that’s my dream gig.

Batman: Hush has also proven to be a dream job for Riddler voice actor Geoffrey Arend:

I was a fan of the Batman: Hush storyline, and when I found I was going to play The Riddler I was very excited. (His is) a small part, but he plays such a big part of getting all these bad guys together. This story is so cool. It gives us the romantic Batman, that we’ve kind of wanted to see with Selina Kyle, and gives us the emotional point going back to his childhood. It puts him on the ropes. It’s good to see Batman falter a little bit. He’s such a sociopath, to see him get nervous is really fun. 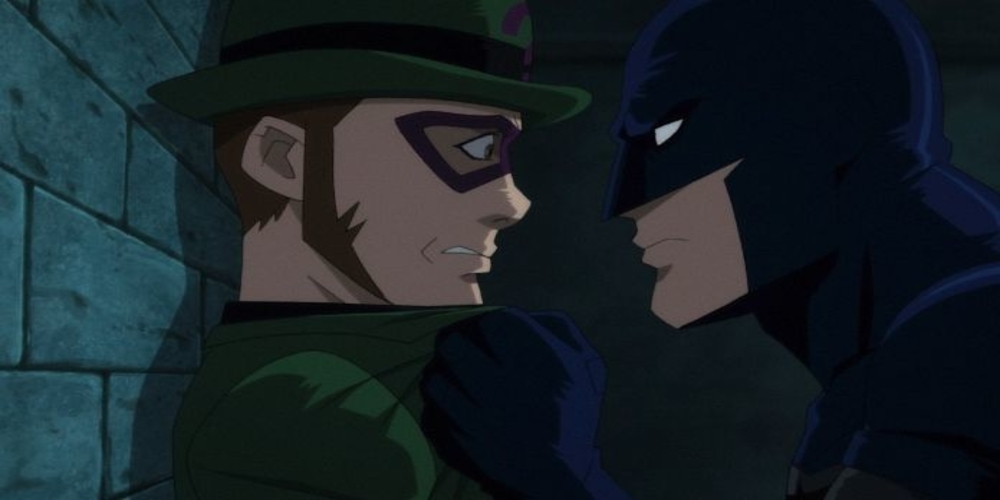 Jason O’Mara, in his 10th movie voicing Batman, says that there’s still unfinished business about his version of the character, that he would like to see explored:

There are some unanswered questions about his relationship with Damian. I think that’s going to have to come full circle somehow and that’s always been integral to this run. I think something has to happen with this Justice League and some of those relationships. Although, I do feel like Batman and Superman got a lot of mileage out of those Superman movies that just came out, Death of Superman and Reign of the Supermen.  So, yeah, I think it’s more personal for him. It all boils down to Damian, and I don’t know if that’s something that will ever be resolved, whether it will be sooner, later,” O’Mara continued. “How long this is going to go on for? Certainly, I’m going to ride it for as long as they ask me. But this does feel like a high water mark, Batman: Hush, for this continuity. I’m trying to not think of the future. I’m just trying to enjoy this for what it is.

The Batman: Hush movie is now available on Blu-ray and DVD from all good stockists of DC animated movies. It’s a worthwhile watch if you haven’t seen it and if you have, please feel free to comment below.