The Batman Beyond Blu-ray collection is coming! The sequel/spin-off of Batman: The Animated Series will be getting the remastered treatment and is scheduled to hit store shelves on October 29th.

The announcement was made at San Diego Comic Con, during a panel in Hall H celebrating the series’ 20th anniversary. Included on the panel were producer Bruce Timm, casting director Andrea Romano, Kevin Conroy (Batman/Bruce Wayne) and Will Friedle (Batman Beyond/Terry McGinnis).

Included in the box set will be a chromed Batman Beyond Funko Pop, new featurettes, the Return of the Joker animated film and art cards. All 52 episodes of the show will be included, with 41 of the 52 being fully remastered. The remaining 11 were damaged since the series originally aired and had to be uprezzed from older files. 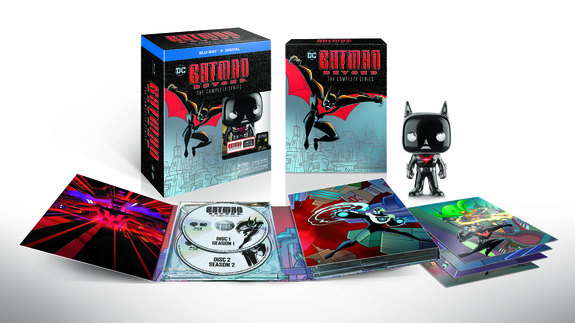 Batman Beyond takes place in the DC Animated Universe, which is also home to Batman: The Animated Series, Superman: The Animated Series and Justice League/Justice League Unlimited. Beyond takes place decades in the future where an old Bruce Wayne (Kevin Conroy) has retired as Batman due to health issues. Terry McGinnis (Will Friedle) ends up discovering the Batcave and donning the cowl to become the Batman of the future, under the mentorship of Bruce.

Batman Beyond has become a beloved show and character in the years since. Much like Harley Quinn before him, Terry McGinnis has now become canon in the pages of DC Comics.

Batman: The Animated Series received the Blu-ray treatment last year. There has been no word on Superman: TAS or Justice League/Justice League Unlimited, but I’m sure they won’t be too far behind.

Will you be adding Batman Beyond to your Blu-ray collection? Let us know!