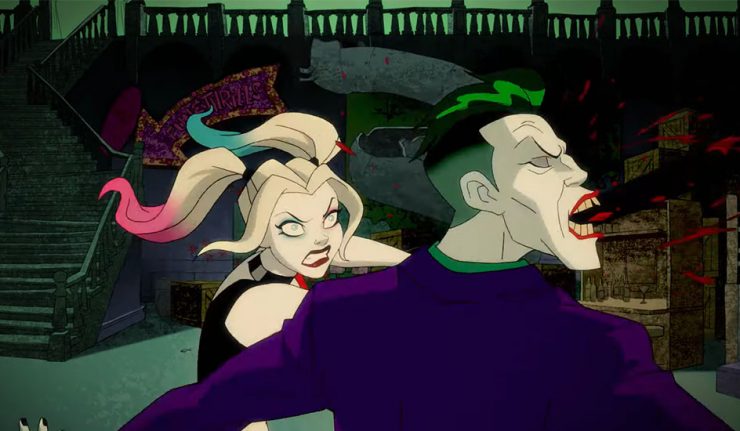 We’ve done our waiting. Nearly two years ago, DC Universe announced that they would feature an adult oriented Harley Quinn animated series on their slate of original content. However, that production schedule has been such a drag in the meantime. Promotion was pretty limited with very little to show for this highly anticipated series. Then, fanservice happened. At New York Comic-Con last year, DC Universe dropped the very first teaser for Harley Quinn. It showcased the animation style, voice actors, and general humor… fans were hooked. Well, at least I was. It was one of the best teasers I’ve ever seen and it was genuinely hilarious. Then, 2019 came around, again with little promotion aside from some great teases by Kaley Cuoco, who plays Harley. However, last night at San Diego Comic Con, we finally received our first extensive look at the series. DC universe dropped the first trailer for the Harley Quinn animated series.

She’s gonna make it after all.

Let’s just jump right in it, shall we? Warning: This uncensored trailer is definitely not safe for work.

This glorious trailer revealed so much about the series, without revealing too much at all. We get a better sense of the humor, the DC universe that Harley gets to play in, her status in that universe, and the general tone of the series. It’s going to be bright, colorful, wacky, cartoony, and very adult. All of this without really telling us the plot at all.

Possibly one of the most important things about this trailer is that we’re seeing the status of her relationship with the Joker. Casual fans oftentimes romanticize Harley and Joker’s relationship without realizing it is possibly one of the most toxic and abusive relationships you’ll likely ever see. Seeing Harley smash her baseball bat into Joker a few good times was definitely fun and satisfying. We also get a brief tease of Harley and Ivy’s own romantic relationship. These visuals comfortably rest atop Joan Jett’s chaotic cover of the Mary Tyler Moore Show theme song is perfection.

What do you think of the first trailer for the Harley Quinn animated series?

Unfortunately, we still have no release date, but we should expect it this fall on DC Universe. If you haven’t subscribed yet, what are you waiting for? A baseball bat to the groin? Do it!

Check back with DKN for more updates!