In case you forgot, DC is still celebrating Batman’s 80th anniversary, so be sure to continue on with your festivities. I’ll wait a moment for you do so… are we good? Well, there’s a new piece of merchandise that can help you continue the celebration. Funko, known for their insanely popular Pop! vinyl figures, are also in the mood to celebrate the Dark Knight by honoring Christopher Nolan’s Dark Knight trilogy. For Batman’s 80th anniversary and their line of Movie Moment figures, they have recreated a moment from what looks to be Batman Begins.

At the end of the movie Lieutenant James Gordon introduces the audience to his new means of summoning the Batman, the Bat Signal.

Here’s the moment in question:

It’s a pretty wonderful scene that also offers the first tease of what would become one of greatest live-action portrayals of the Joker and Funko has lovingly recreated it. 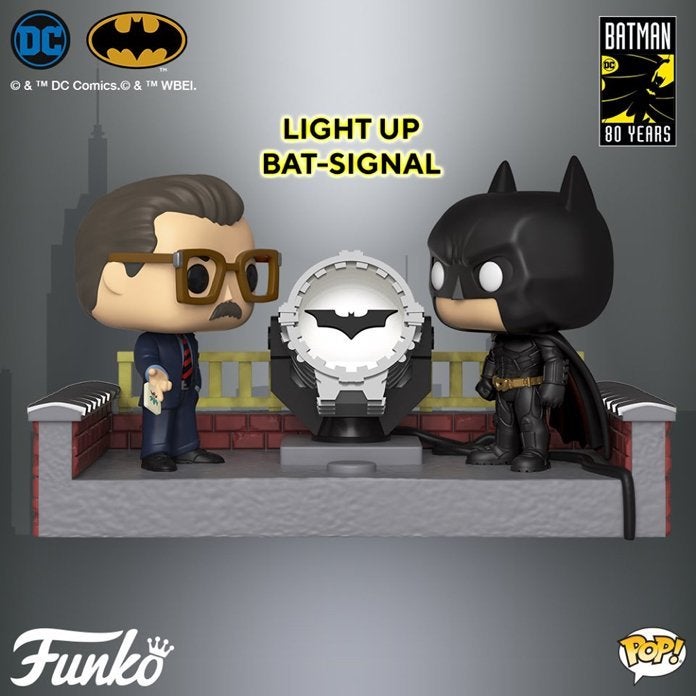 While not the coolest thing about it, I do love that Gordon is holding Joker’s “calling card” as he calls it in the scene. It’s pretty awesome attention to detail. Obviously, however, the real star of the show is that the Bat Signal actually lights up! Such a neat little feature that should fit right well in any Pop! or Batfan’s collection, and, yes, batteries are included. You can start shining the beacon as soon as you get it! What a wonderful way to memorialize such a key scene. Even more so, I’m starting to see the parallels between the endings of Batman Begins and Dark Knight. At the end of Batman Begins, Gordon introduces the Bat Signal. At the end of Dark Knight, Gordon destroys it. What a great movie series.

As of now, the figure is set to be shipped out in September for the pre-order price of $32.99. The price isn’t unreasonable in the slightest and while I’ve never been the biggest fan of Pop! figures, you might see me shining the Bat Signal from my room in the near future. Prior to today, I had never heard of their Movie Moment Pop! figure series, a mistake that will soon be rectified.

You can pre-order the figure from Entertainment Earth.

Last year, DKN celebrated the 10th anniversary of the release of the Dark Knight. Check out our retrospective.

‘Birds of Prey’ Shooting For a ‘R’ Rating