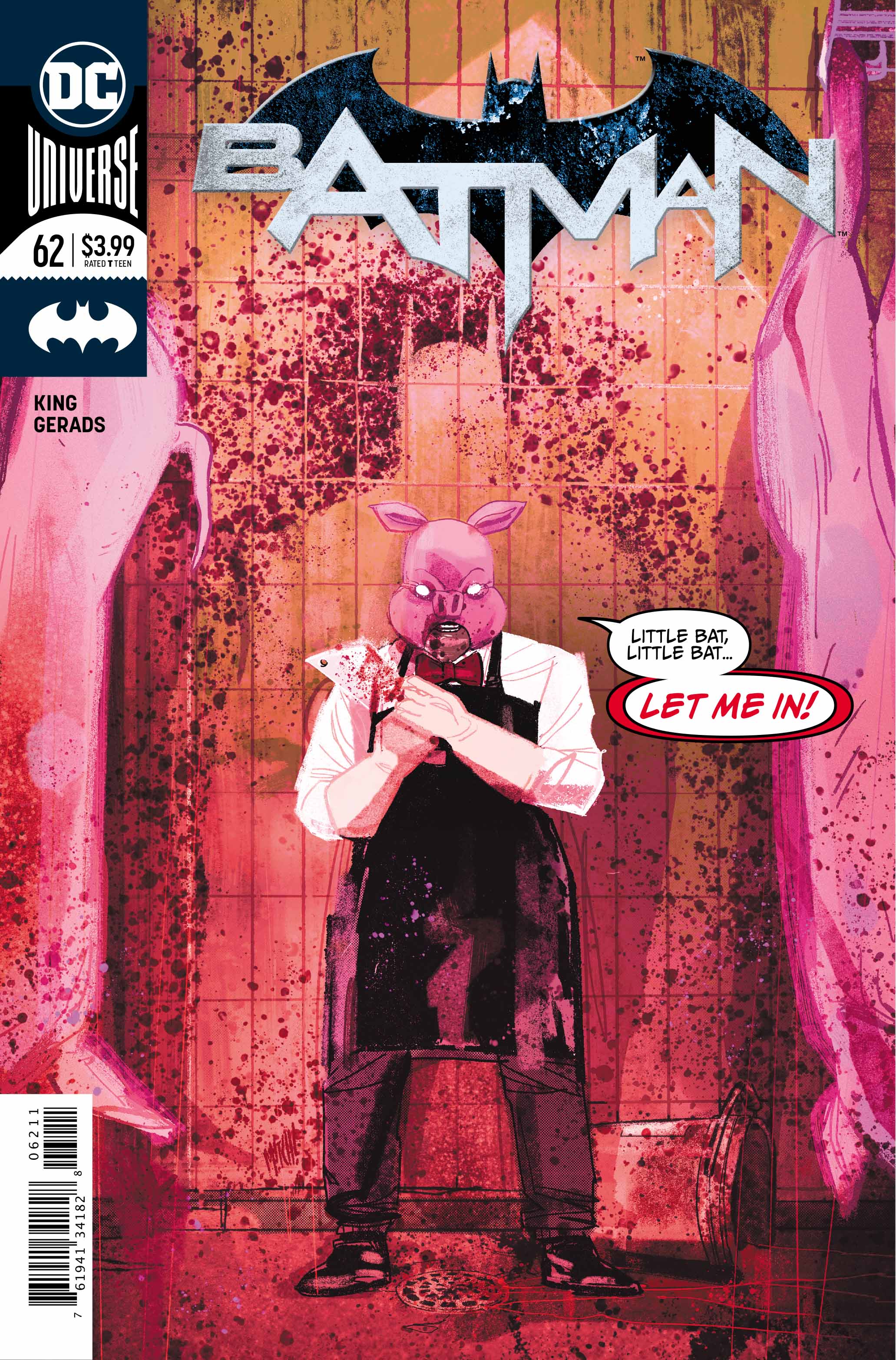 Batman has been captured by Professor Pyg… but, not is all as it seems.

This issue is a bit of a mind trip. Writer Tom King wisely chooses to drop readers right in the middle of the action, just as Batman regains consciousness. It makes the entire experience with Professor Pyg weirdly disorienting. This confusing tone is reflected onto the readers in more ways than one. While that is intentional, it can also be frustrating.

What is Pyg’s role here? Will we ever get a follow-up to the cliffhanger with Flashpoint Batman? Where is the Master Bruce kid from the previous issue? These questions are purposefully not answered. It is annoying that readers do not get an explanation. Fortunately, one can be more forgiving when you realize that is King trying to stretch his storytelling muscles and create unconventional stories. Even more fortuitous, thanks to the bi-weekly scheduling, these odd narrative experiments are not as bothersome.

In fact, the more we see of the “Knightmares” story arc, one realizes that they are not a coherent, linear story. Upon closer inspection, “Knightmares” seems to be a very apt title, as so far each issue is thematically tied to some nightmare scenario for Batman. In this case, it seems like that the Dark Knight’s nightmares are out of control. 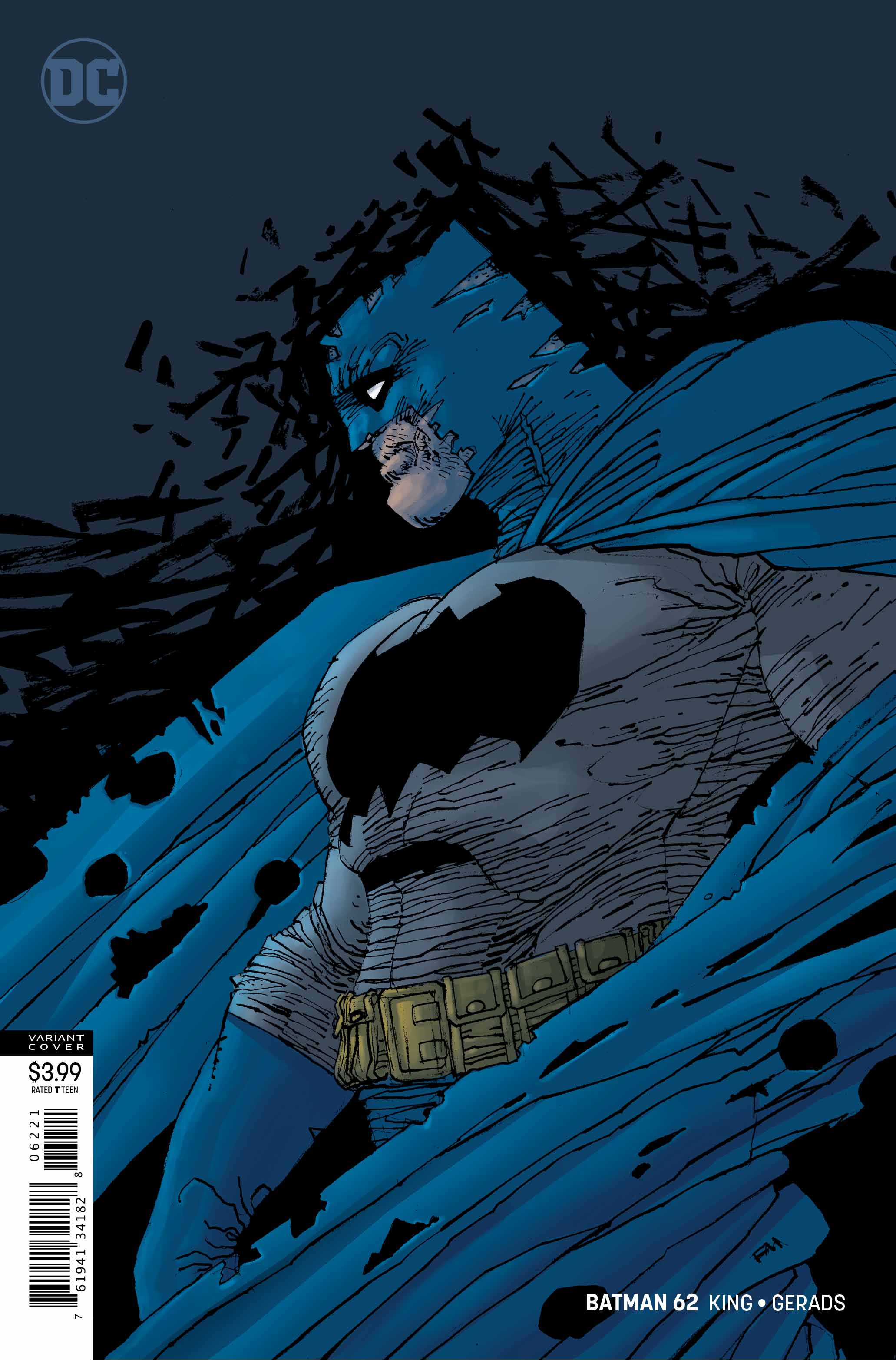 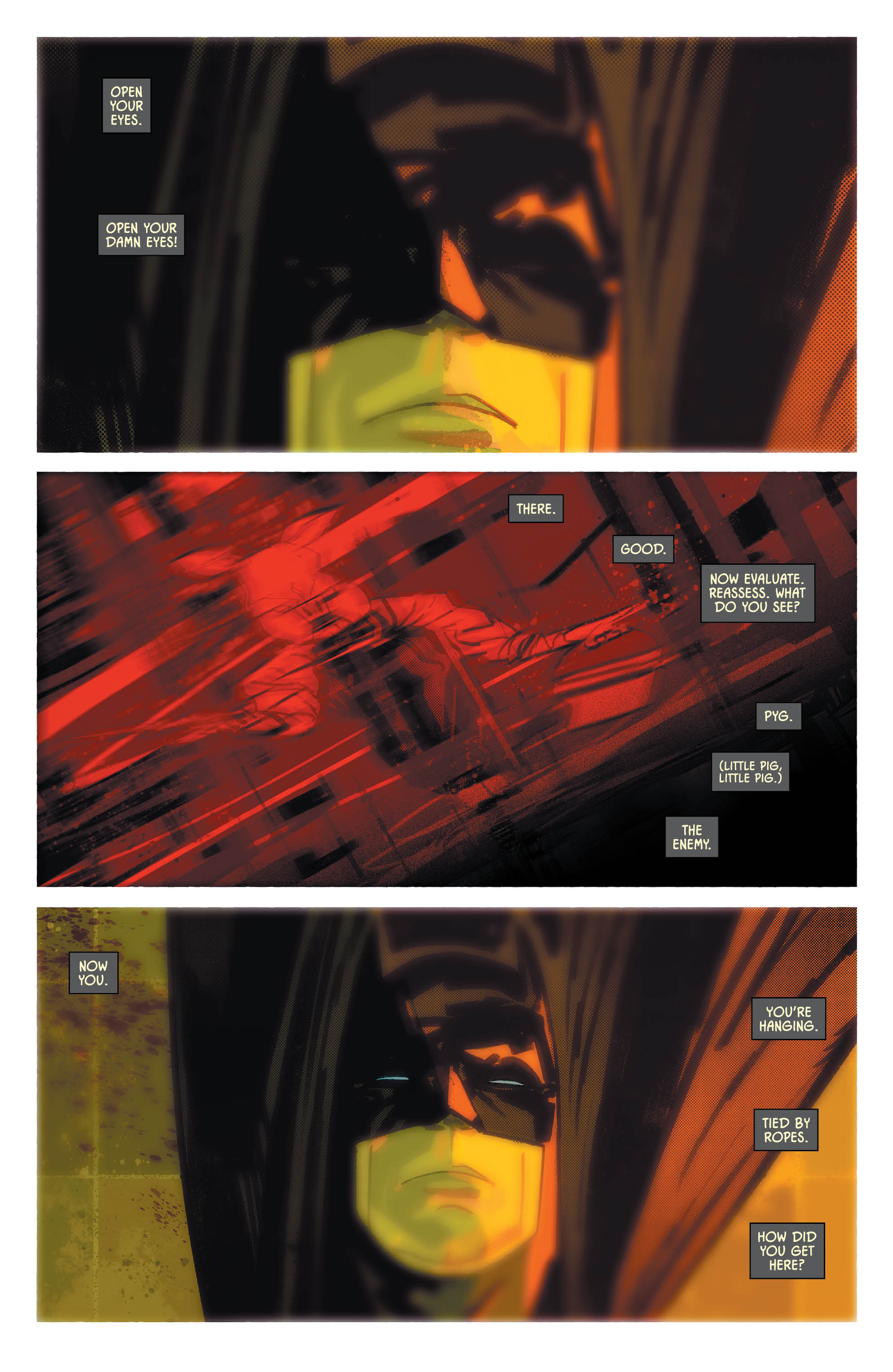 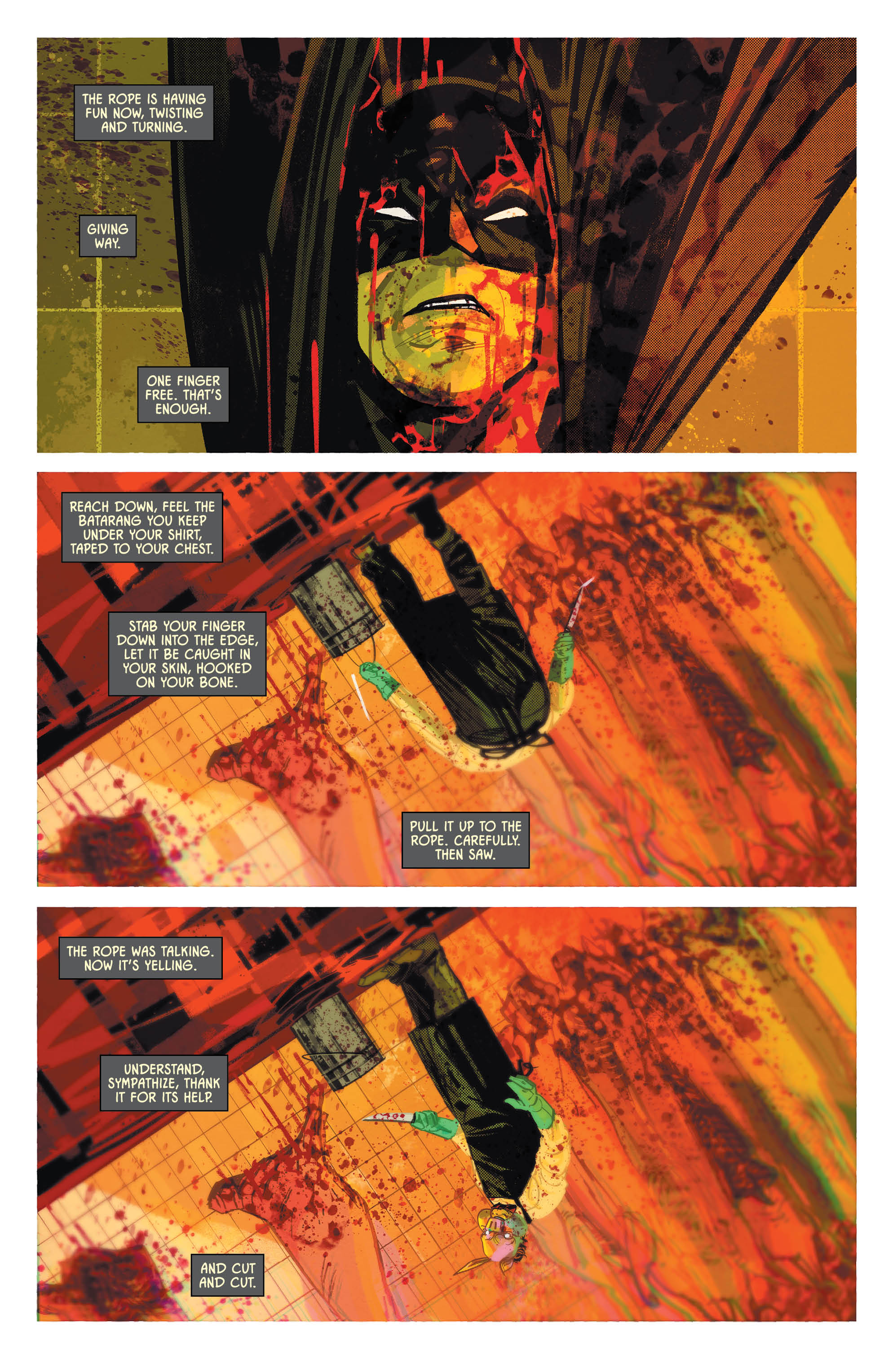 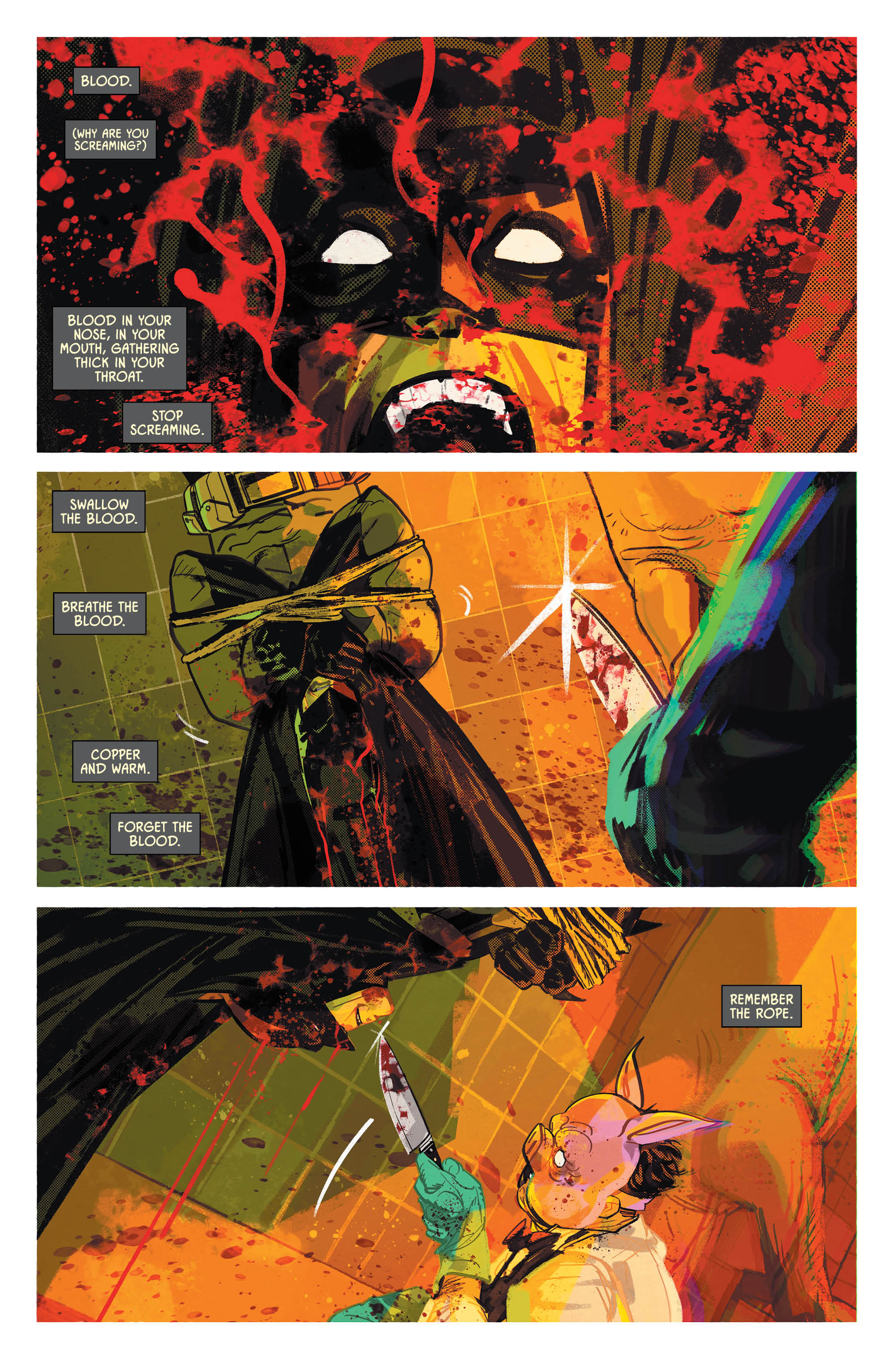 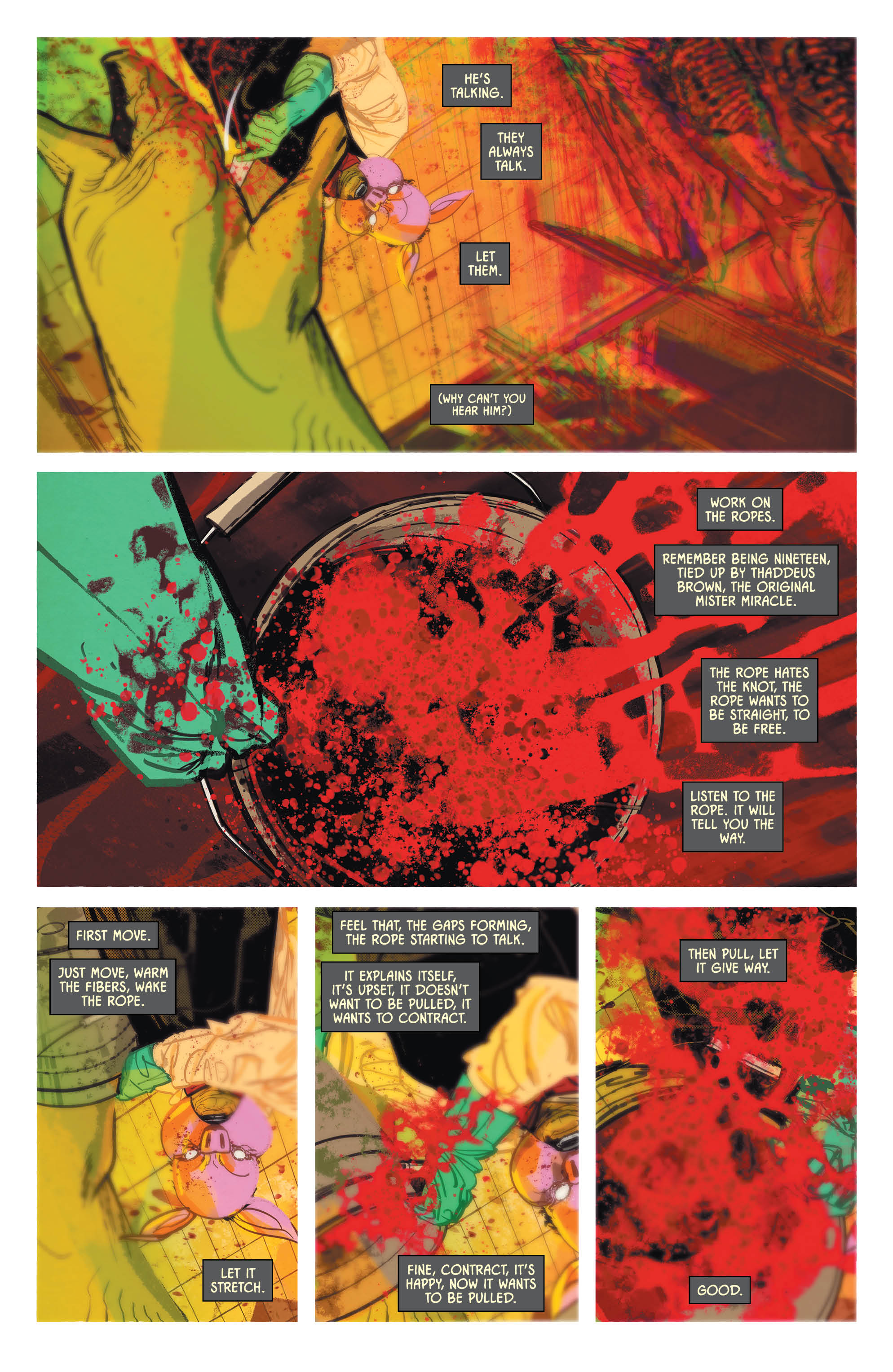 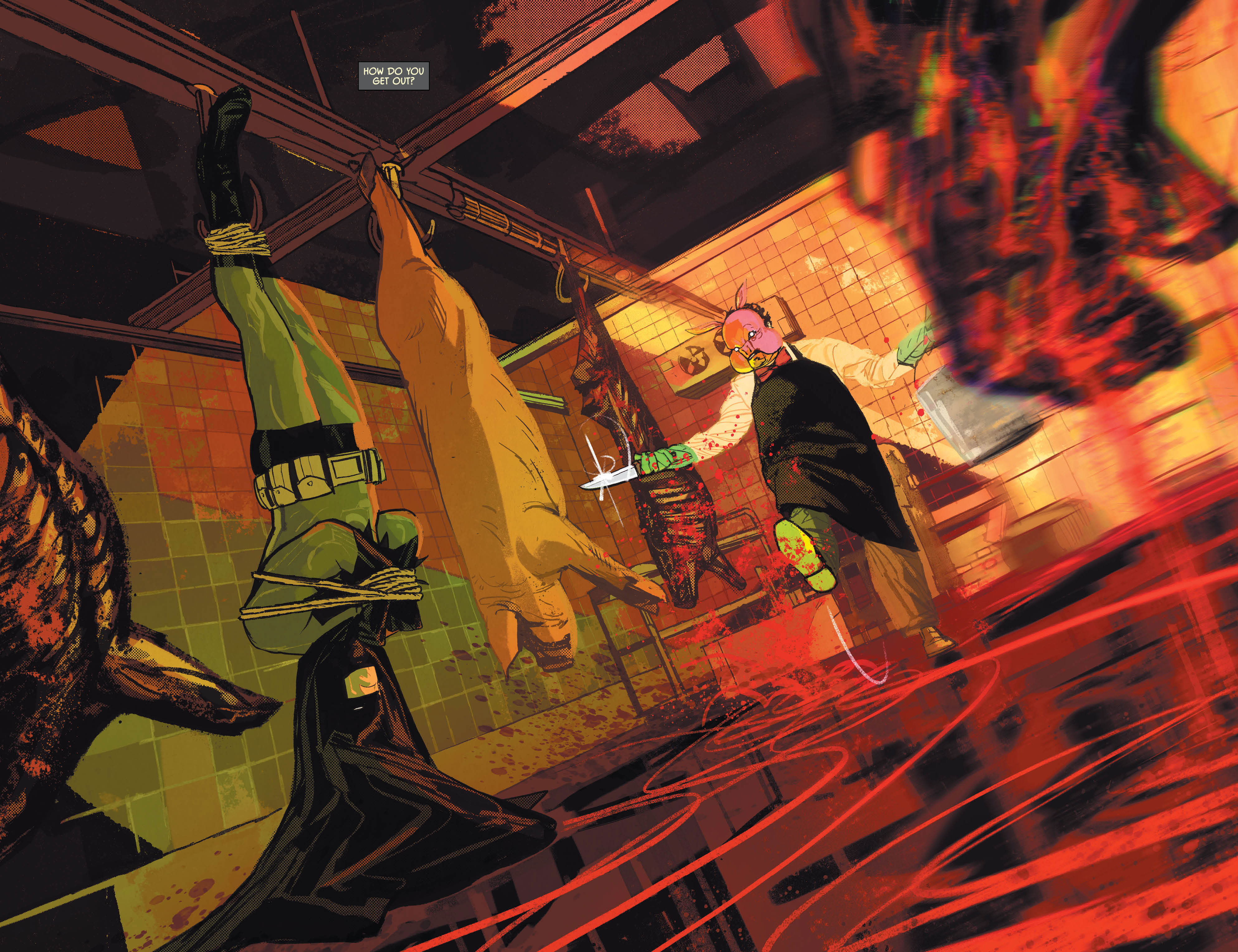 It’s kind of a brilliant meta-critique on modern-day Batman, who is a total control freak. He micro-manages his sidekicks, he tries to weaponize Gotham City, he created a Big Brother-esque satellite to spy on people. Batman for the past 20 years has always been about control. It is inherent to his character from the beginning. Ironically, the best line that succinctly describes this is from the infamous Batman and Robin movie.

“What is Batman, but an effort to master the chaos that reaps this world?” Alfred rhetorically questions,  “An attempt to control death itself?”

This issue is one of Batman’s biggest nightmares. If the previous instalment featured his personal fear of becoming a monster as a child, this one is about having no control whatsoever.

The downside is for Professor Pyg fans. Pyg really does not do anything exciting or important. Now that I think about it more, I suspect King chose Professor Pyg, because of the name. On the other hand, he makes a wonderful literary connection between this comic and The Three Little Piggies poem.

King’s Mister Miracle art partner Mitch Gerads is perfect for this issue. This comic is super chaotic and surreal. Gerads’ colorful and sketchy art really enhances the hallucinatory feel. Nothing looks real in this comic. In fact, some elements have an anaglyphic 3D effect, contributing to the weird atmosphere.

Batman’s head is twisted around now and he is losing his mind, but King and Gerads depict a man whose paranoia is starting get to him. The comic is wonderfully fractured and the art is the perfect accent to the script. Despite the criminal under use of Professor Pyg’s character and lack of follow-up from previous issues, this comic was one of King’s strongest.

‘Batman Beyond’ A DKN 20th Anniversary Retrospective – Part One