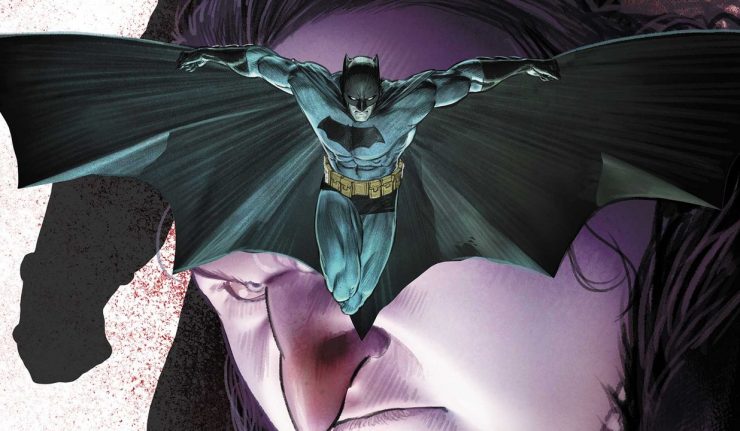 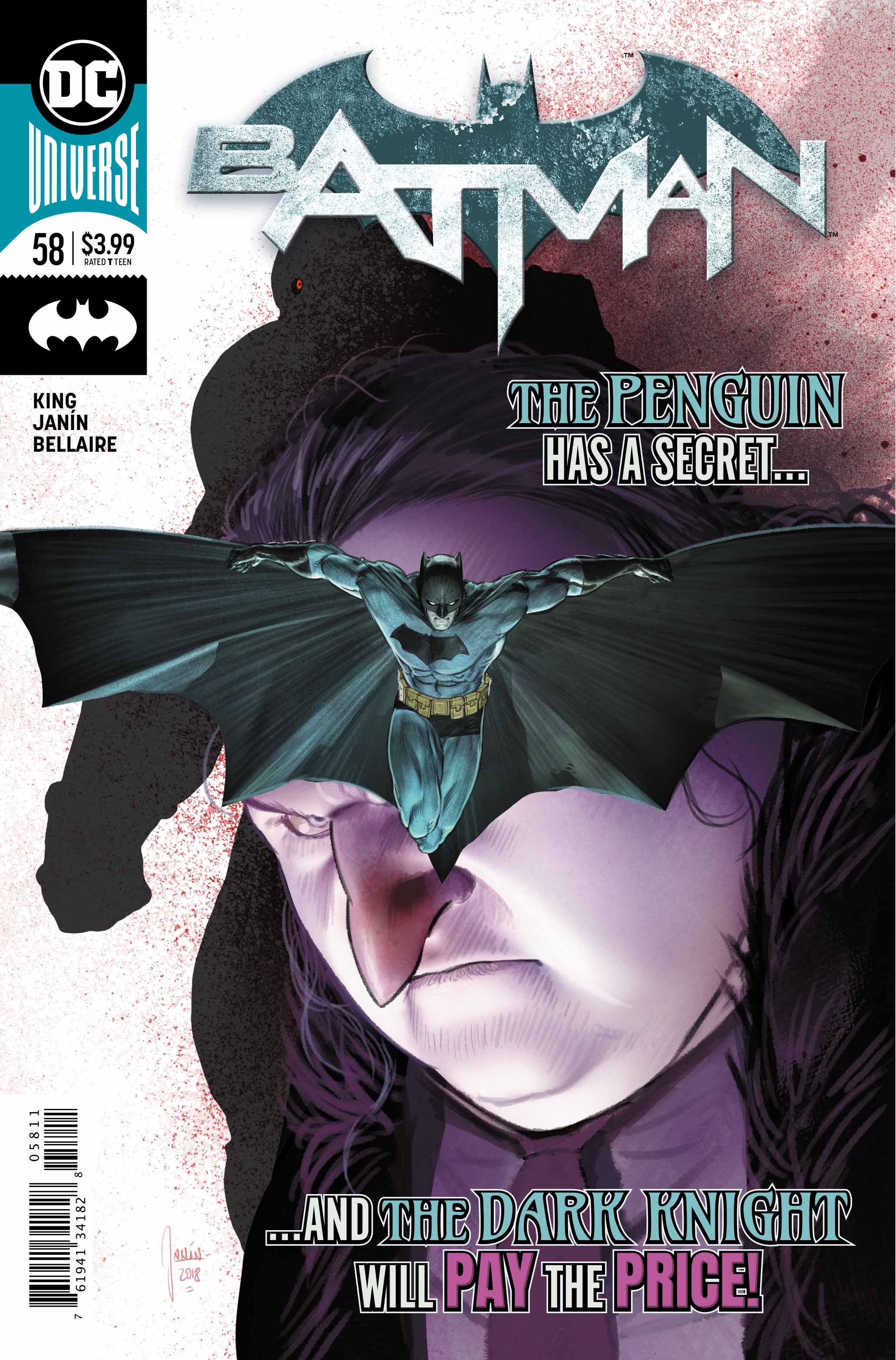 The Penguin is embroiled in Bane’s plot against Batman. What will the the Dark Knight do when Penguin hits him where it hurts the most? One seemingly consistent trait of writer Tom King is how he writes an engrossing story and a frustrating one simultaneously. This comic is a perfect example of that idiosyncratic style.

Here, King creates a sufficiently interesting tale that circumvents typical tropes. For one thing, part of this comic takes place in the past. More specifically, it weaves in and out of the Mr. Freeze-centric “Cold Days” storyline from Batman #51-53. As I guessed, Mr. Freeze is somehow wrapped up in Bane’s conspiracy to break down Batman. That is an extremely intriguing notion, but it’s also a little annoying.

What is Bane’s endgame? It is unclear so far. What is the Penguin’s role in it? King does not provide any clear answers yet. So far, King has not disappointed in teasing answers, so he deserves the benefit of the doubt. But, man, the slow burn reveal of Bane’s machinations are also maddeningly sluggish. 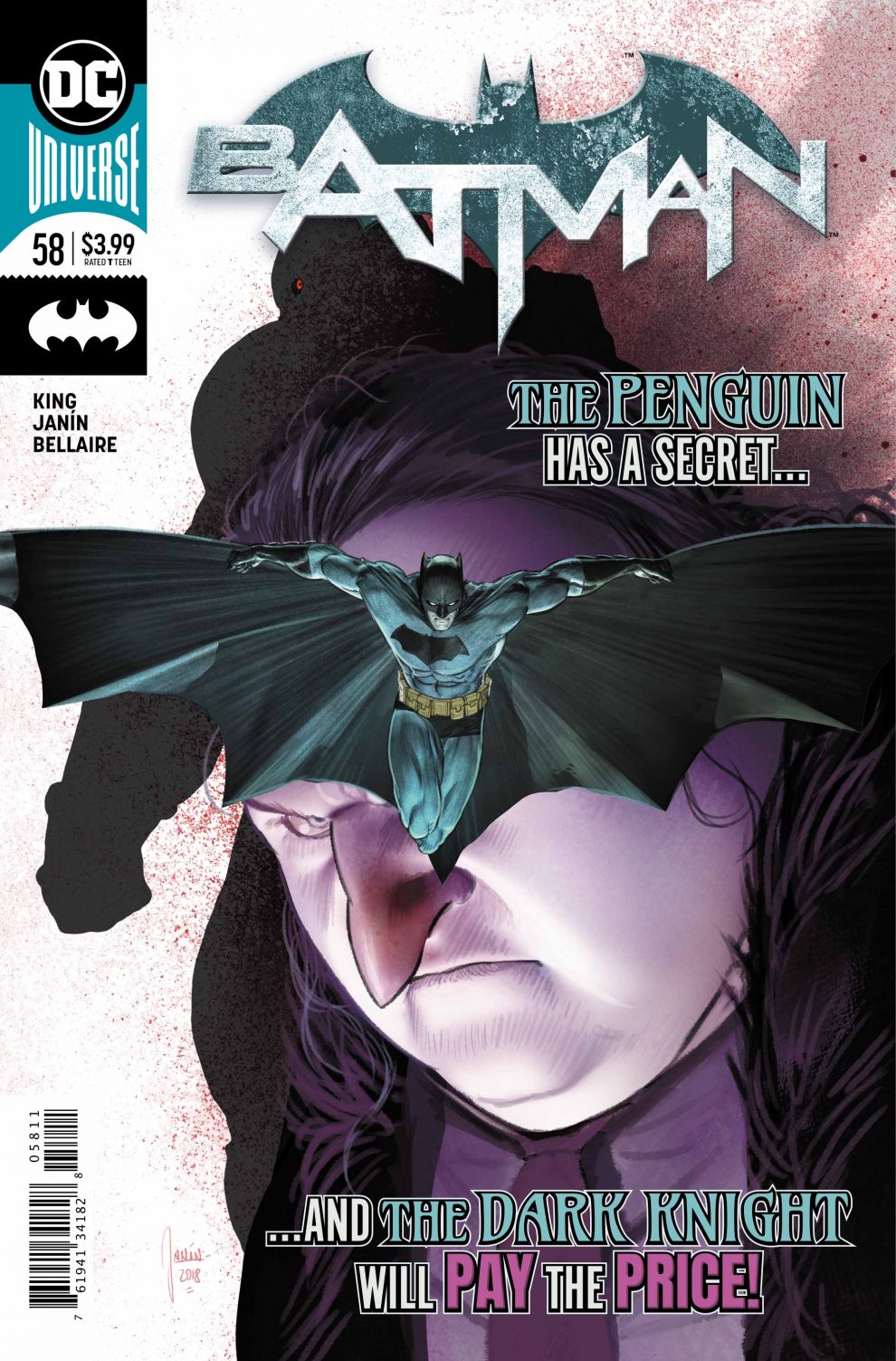 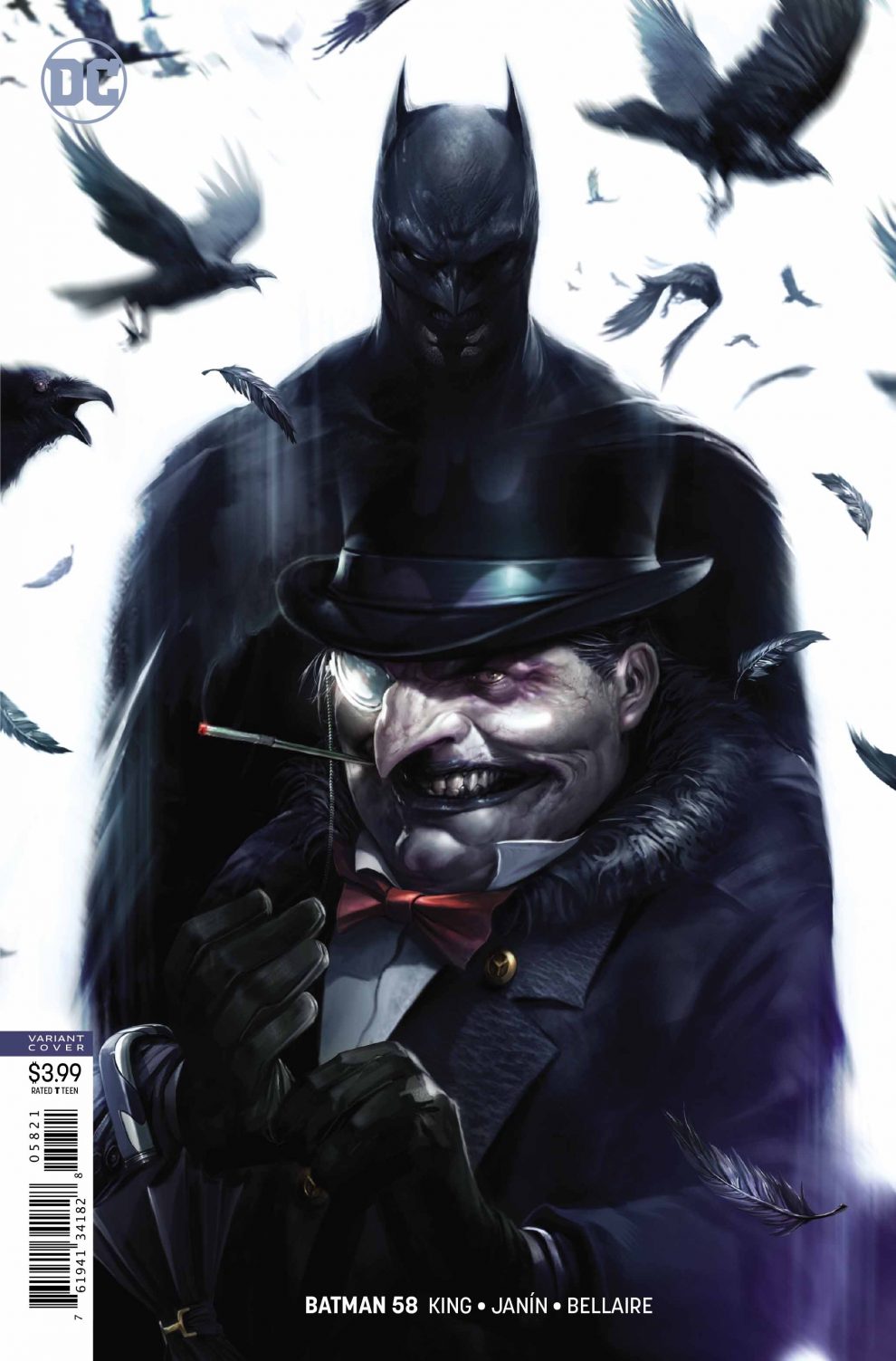 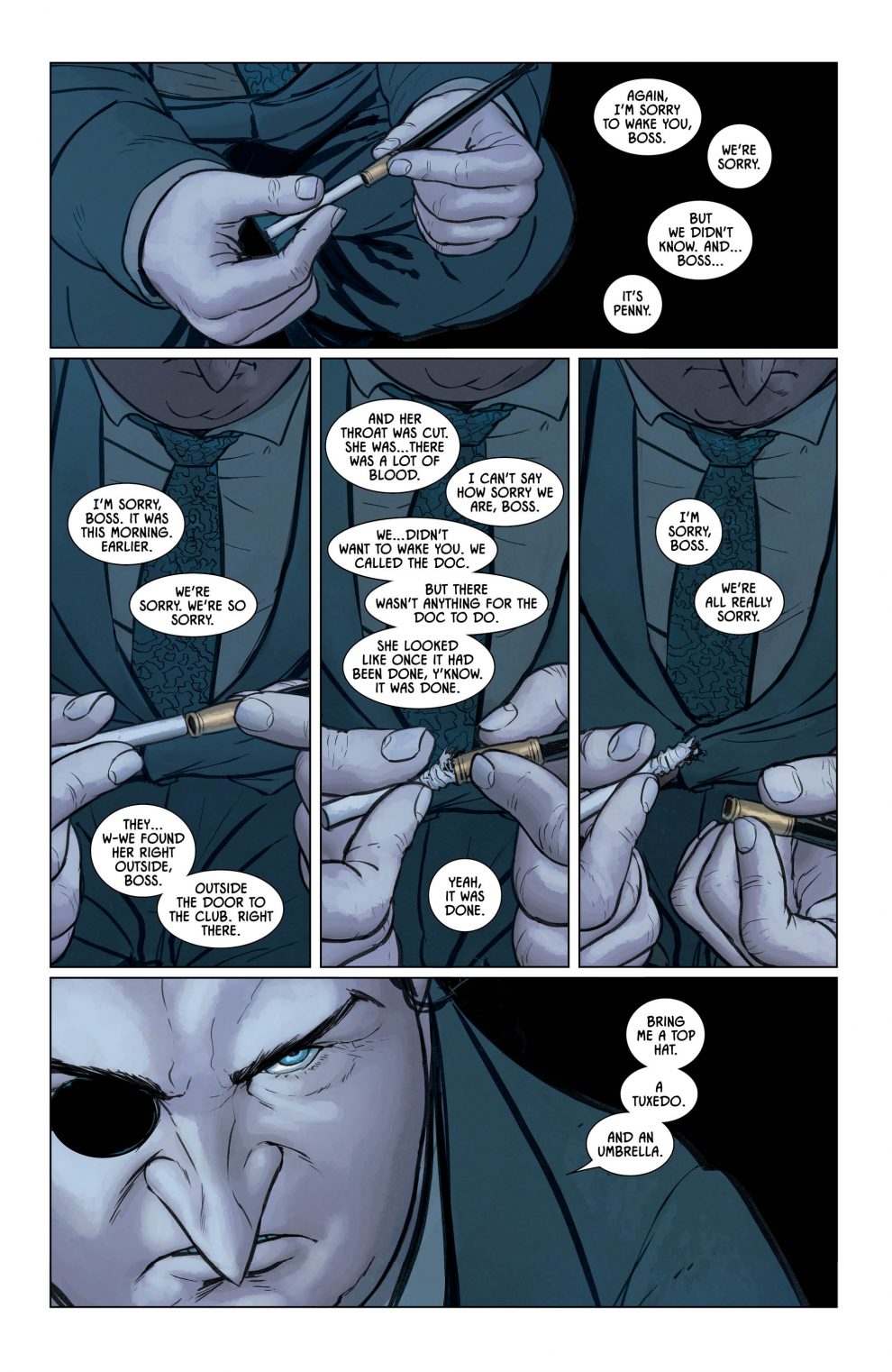 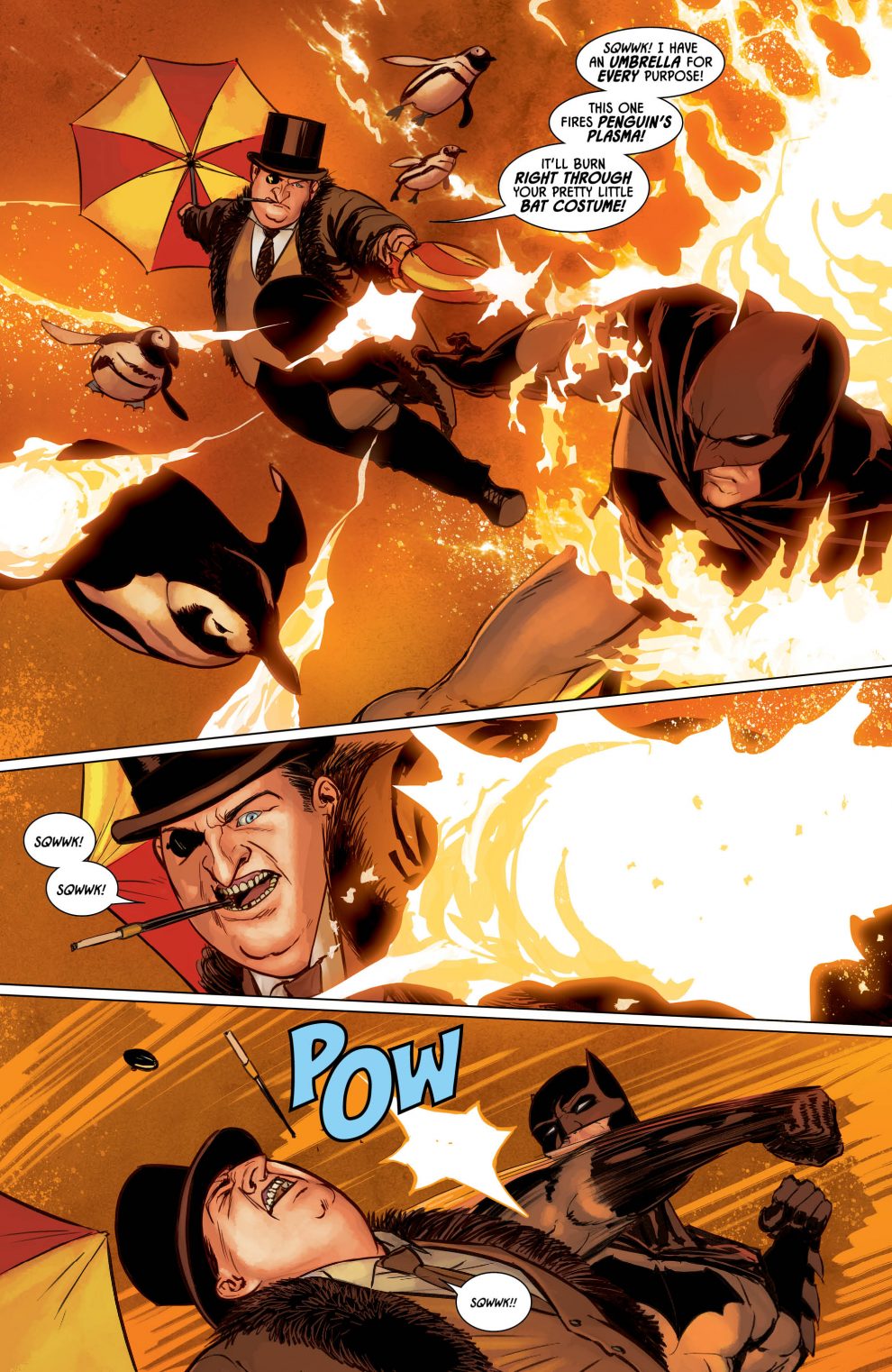 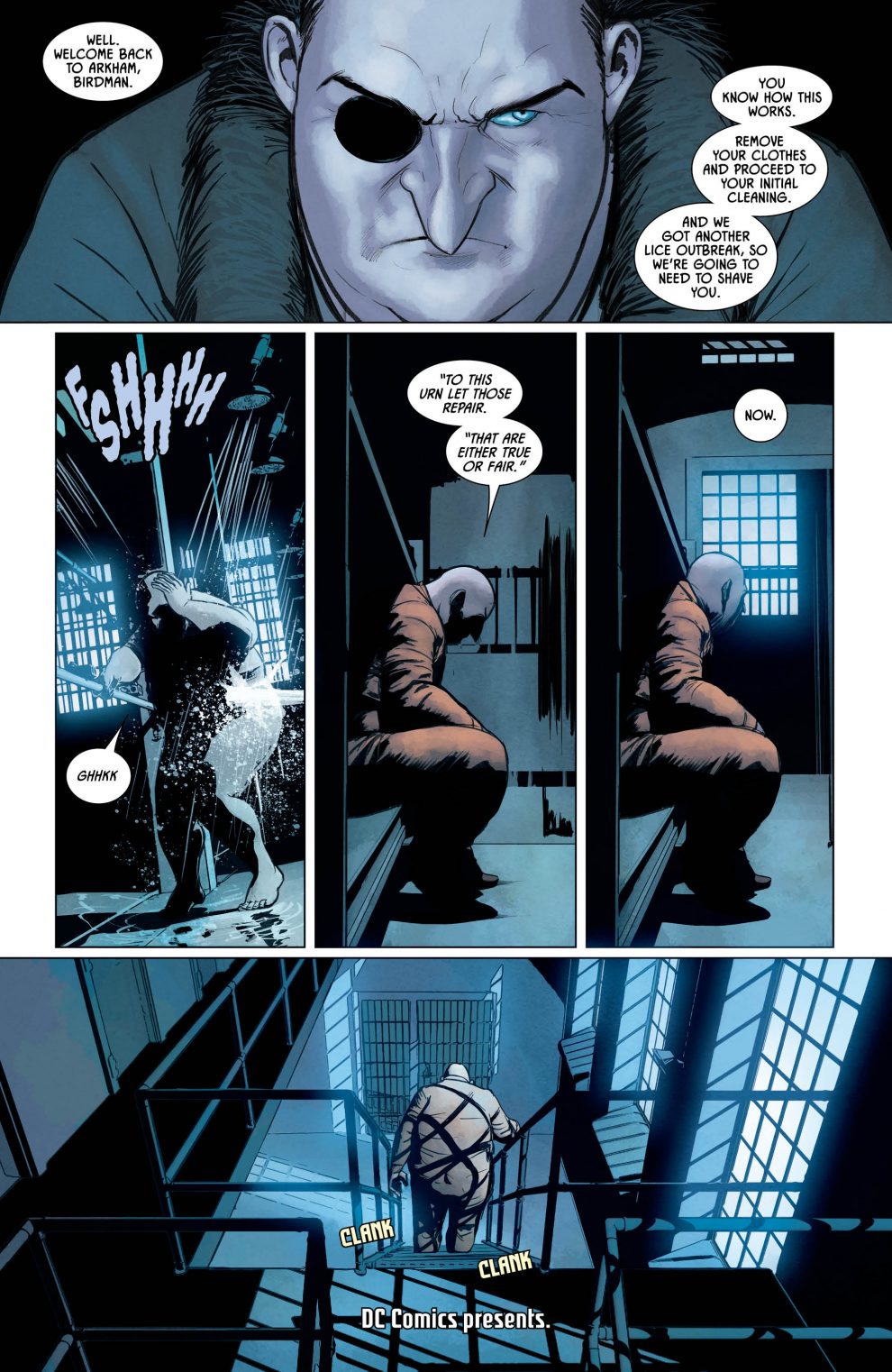 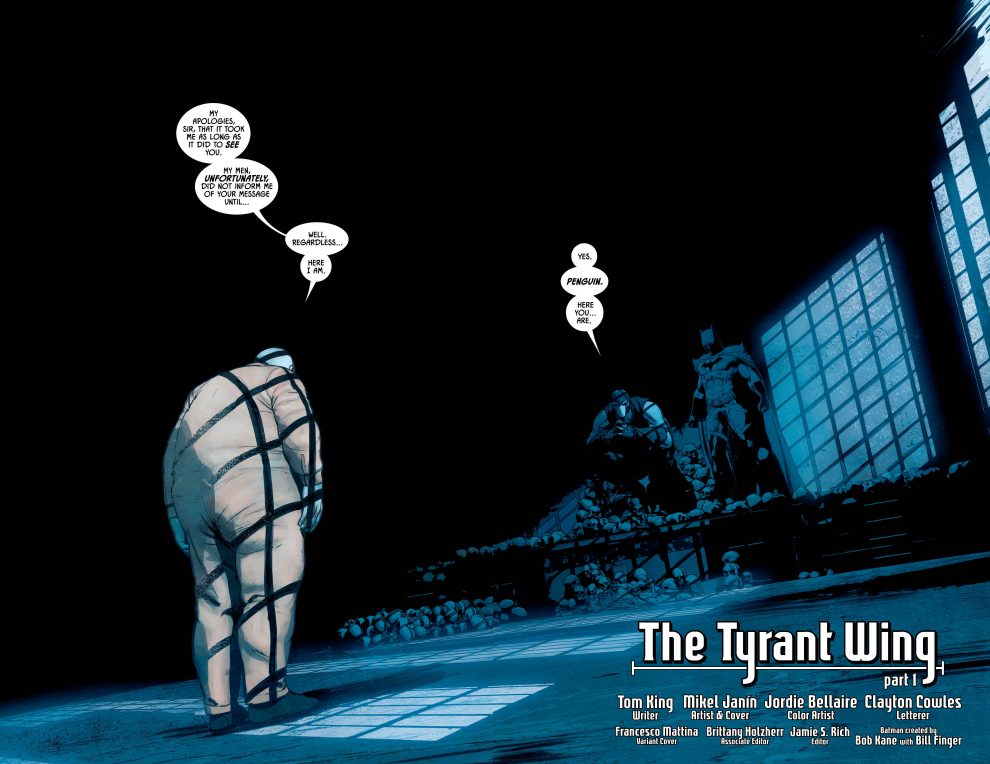 In any case, the Penguin is the main narrative force in this issue. Somebody close to the Penguin died. Who are they? Part of the fun is how King does not reveal it, but this mysterious death dictates the Penguin’s emotional state for the story. He is morose, almost seems bored getting into a typical adventurous battle with Batman. Cobblepot does not become a more serious threat until near the end of the issue. There, King makes a reveal that could potentially have major ramifications for Batman and Penguin’s relationship.

However, the Penguin’s inclusion is not without its problems. Readers of Red Hood and the Outlaws know that Red Hood recently shot Penguin in the face. Yet, there is no explanation or even a reference to that here. If King has a reveal about why the Penguin is not dead or at least brain-dead, it had better be a good one.

The other problem is that Batman’s status quo could be majorly shaken up and…it is really hard to care. As mentioned in previous reviews, Batman himself is so emotionless. His aloofness makes it difficult to hook onto the character and care about anything that happens. In fact, the Penguin is more sympathetic than Batman. It’s so weird that I empathize with Penguin more than Batman.

On the art side, Mikel Janin’s art looks great as usual. Those long shots where Batman is fighting the Penguin’s goons is the best shot. He is detailed and dynamic. There are times when his art looks a little plastic and the Photoshop job shows through. Specifically, the scene where the Penguin meets Bane and Flashpoint Batman looks artificial. They are in the exact same poses since issue #50! Have they not moved since then?

King’s script is both competent and flawed. He has many good, fun ideas, but the execution is always a bit flat. Fortunately, he is bolstered by great artists like Janin. This issue is a good example of what makes King’s Batman both a compelling, but also a frustrating read.