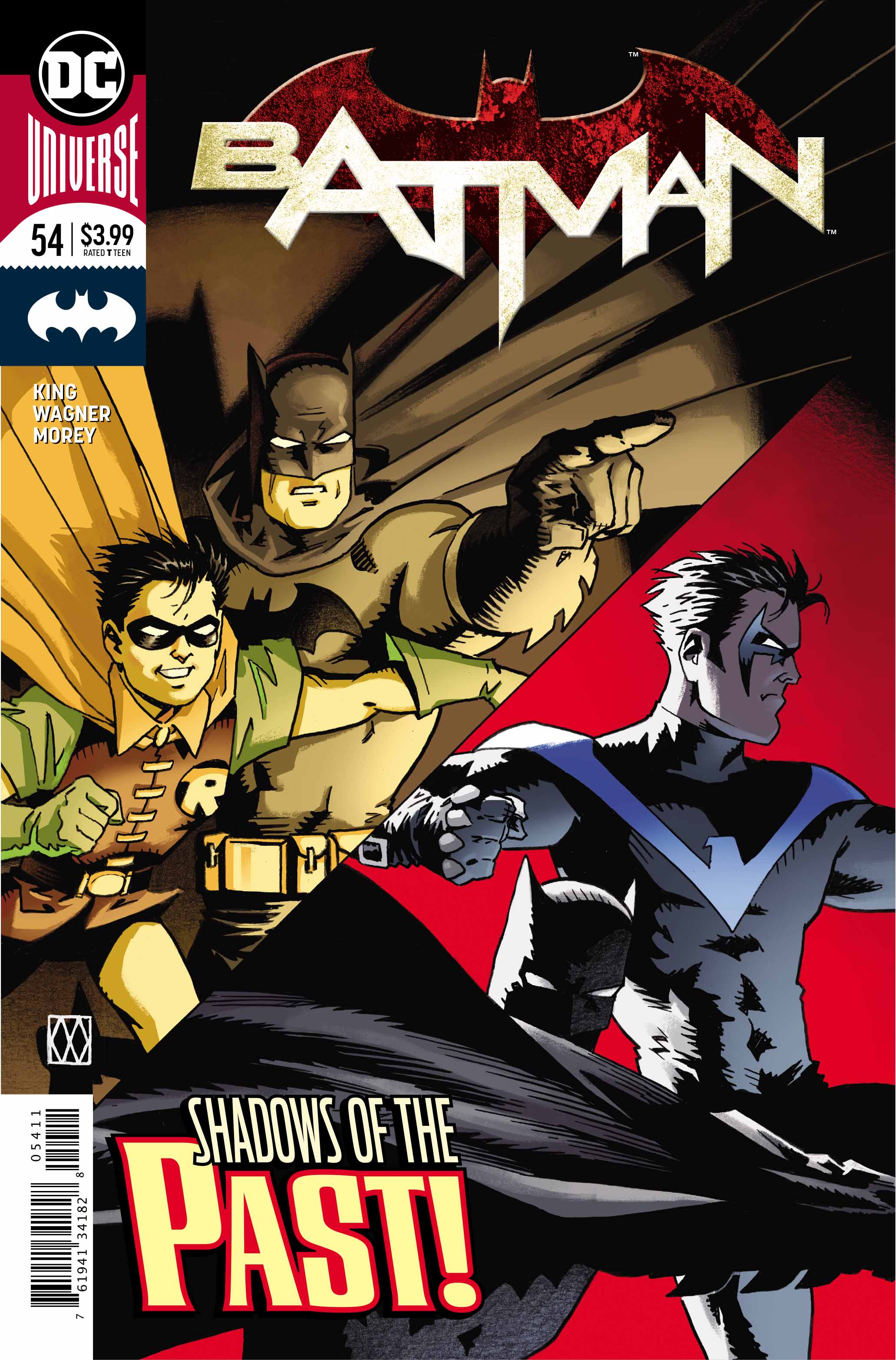 While Bruce Wayne is still dealing with the repercussions of “The wedding”, Nightwing stops by to help.

Tom King has written a fun, done-in-one issue to show the effects of being jilted at the altar. While it is nice, this is now the fourth issue in a row where we see an indirect Batman adventure.

“Cold Days” was a great arc where Bruce Wayne took the spotlight, but the action in that storyline was merely tangental. Here, we see some more traditional Batman action as he teams-up with Nightwing to take on D-list villains. Still though, the action is just window dressing and not the main focus. At this point, it feels like readers need a more conventional Batman exploit where he does typical superhero things.

The cameos of Crazy Quilt and the Condiment King are fun and silly. It almost seems overkill to have both Nightwing and Batman battling them. However, their appearances are a little disappointing, because they apparently have nothing to do with the overarching plot that Bane is concocting against Bats. The Tim Sale variant cover with the villains dance around Batman’s head – while lovely – is deceptive. 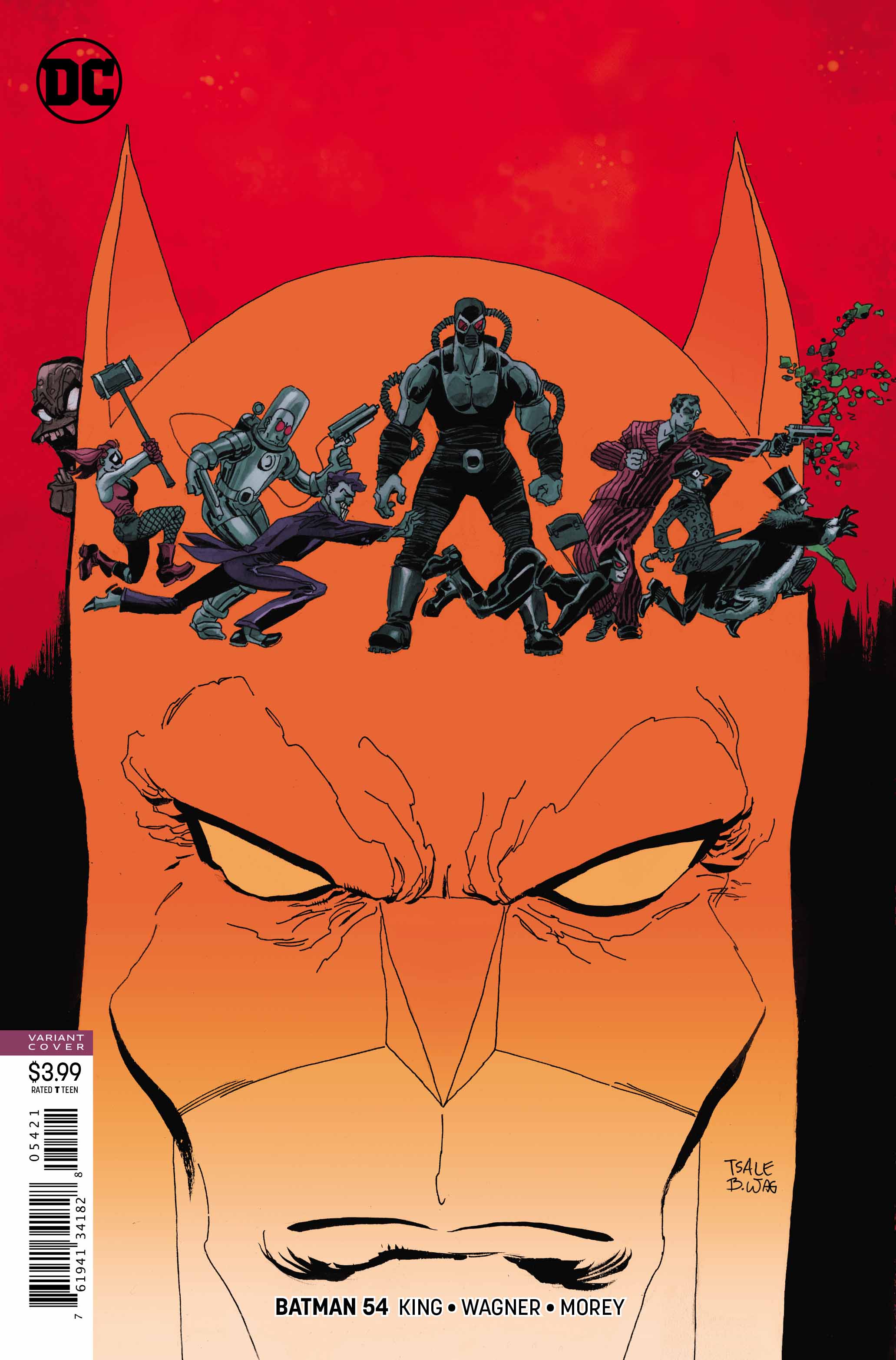 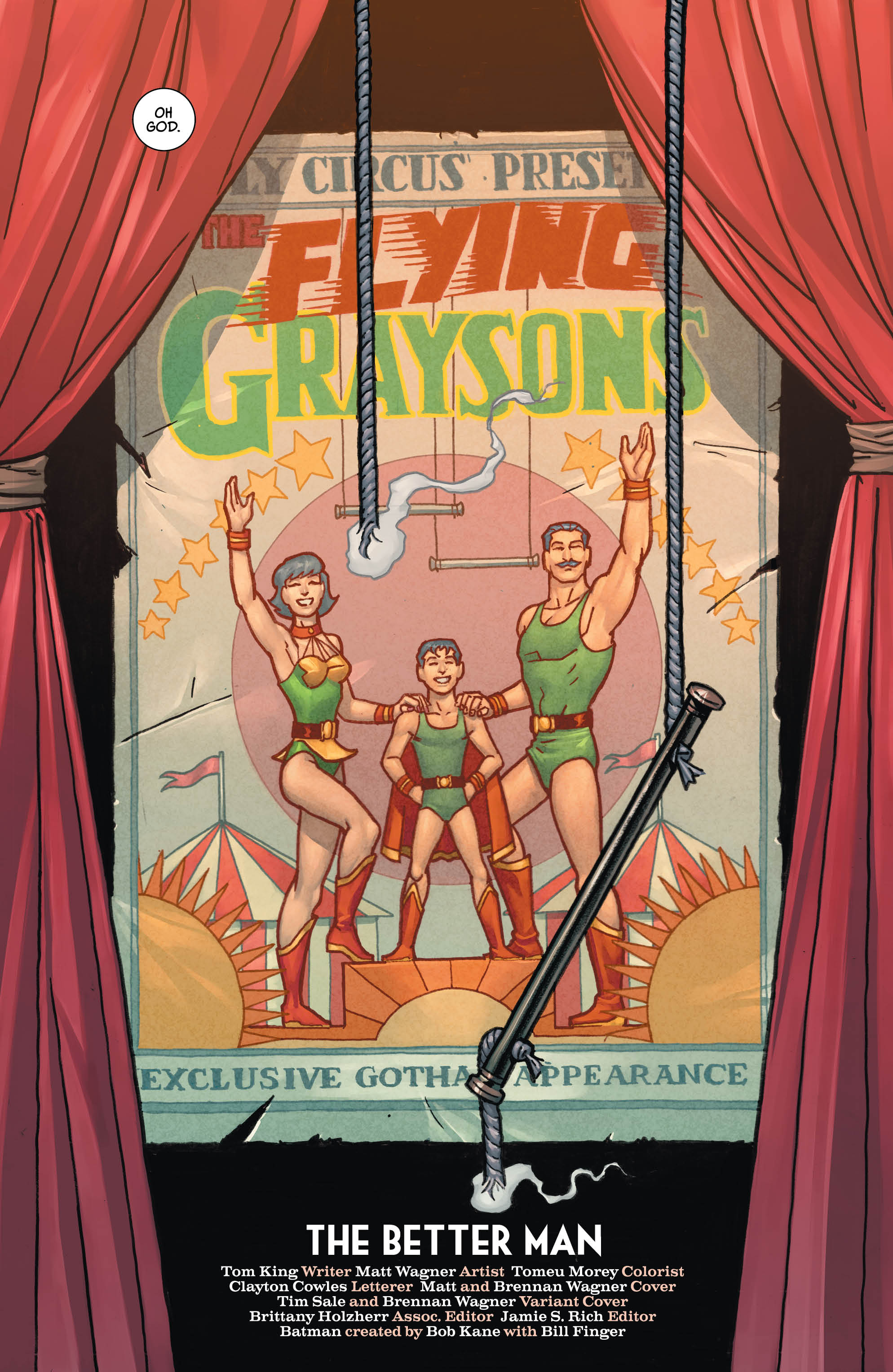 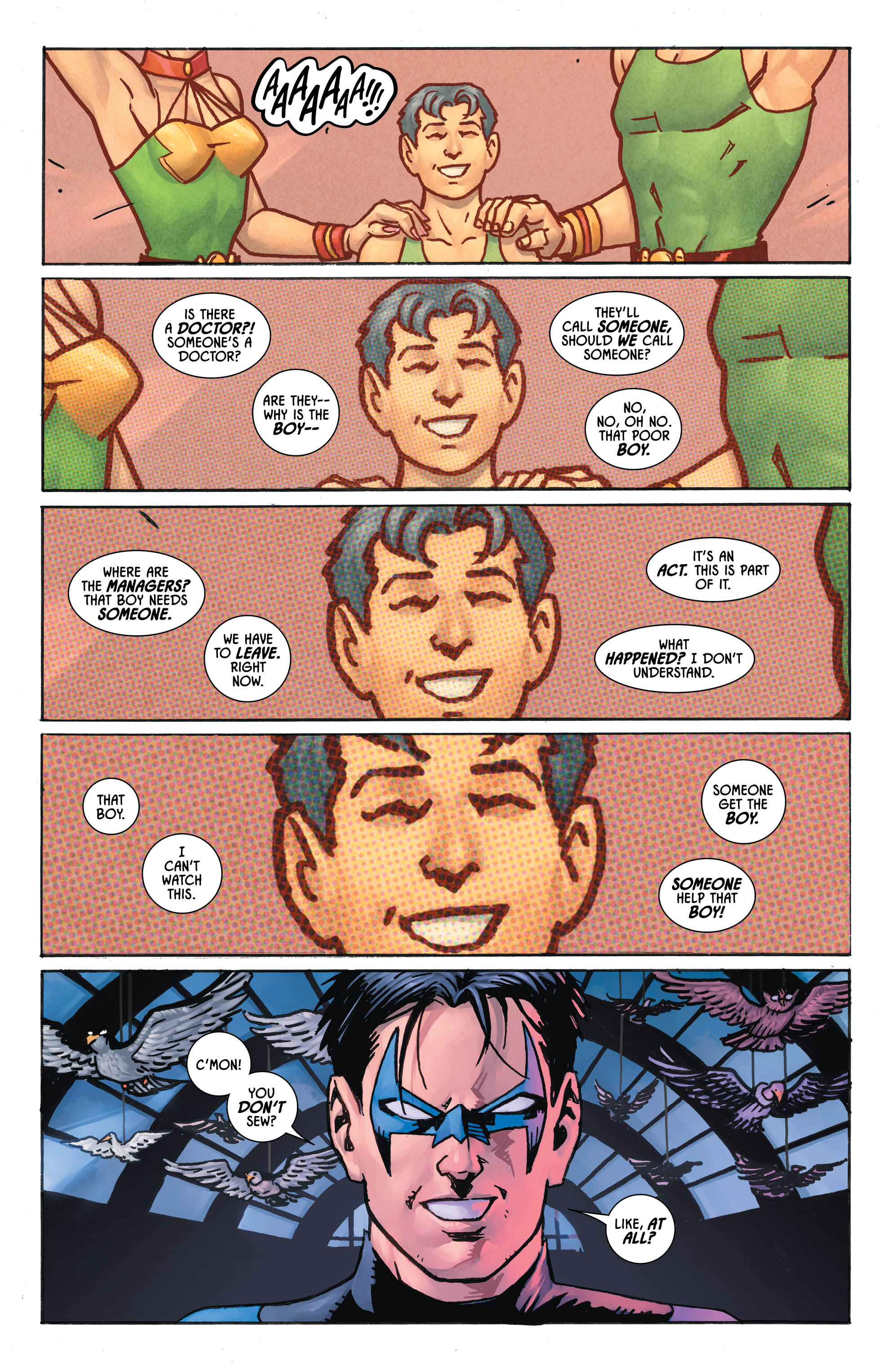 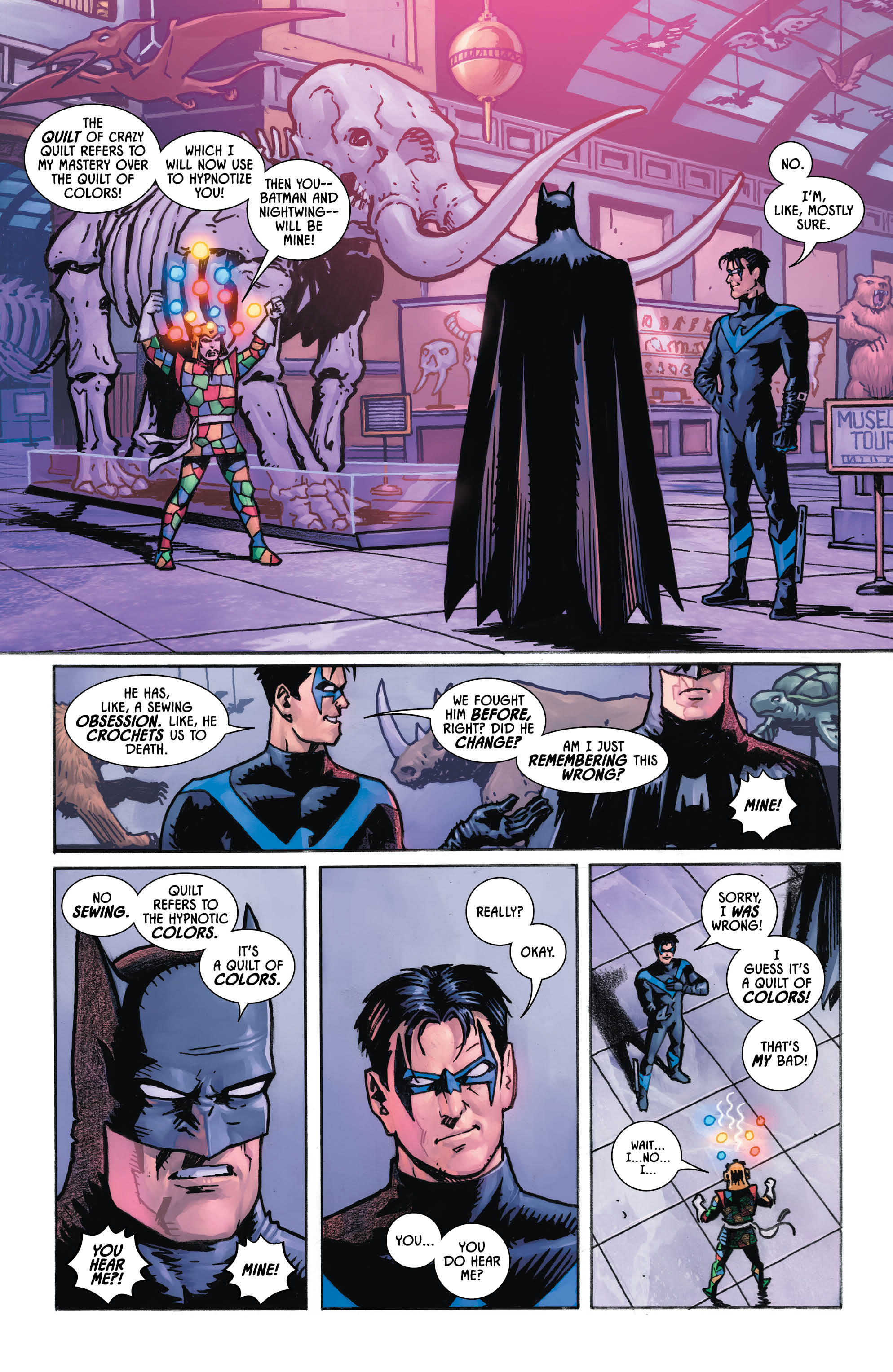 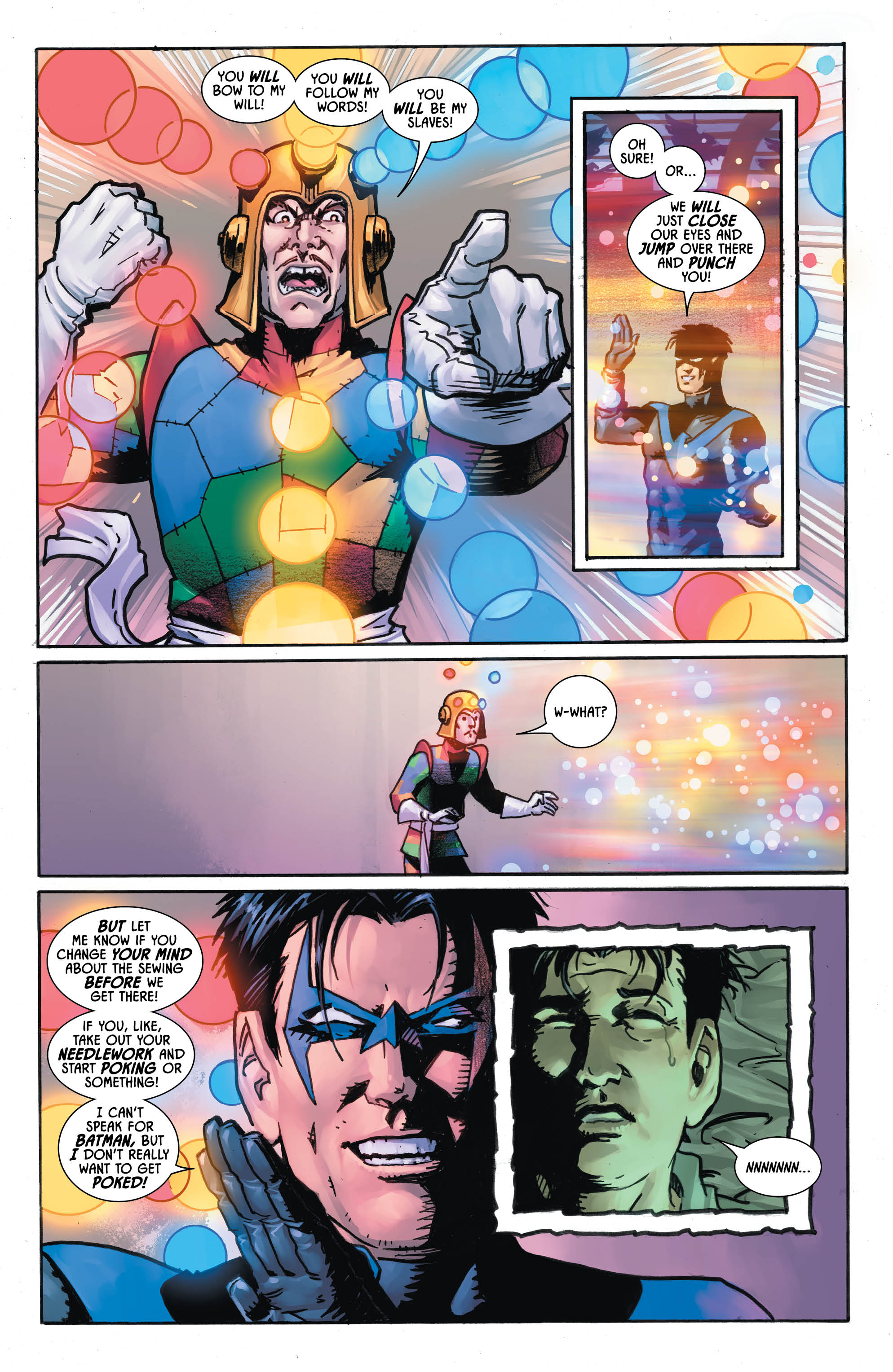 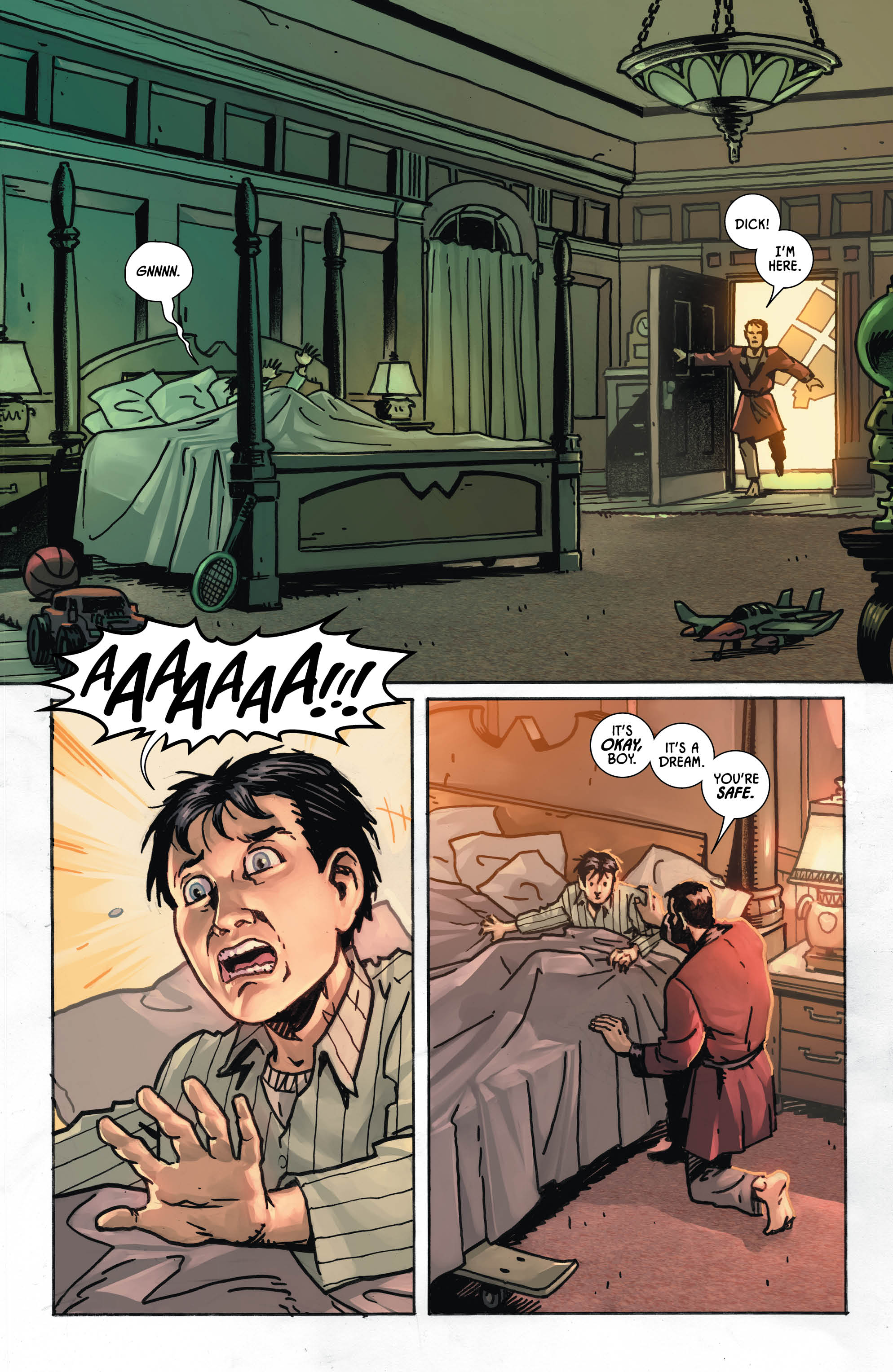 Probably the best part of the story is seeing Bruce actually being a parent to Dick Grayson. When seeing flashbacks to Dick’s childhood, it is rare that we see Bruce raising him like the boy he was, as opposed to training him to become Robin. Seeing Bruce do conventional parenting things, like comfort Dick from a nightmare or even force him to not eat junk food is great. It is heartwarming to see the two interact in a non-heroic way. The flashbacks also really showcase the side of Bruce’s personality that modern Batman readers do not see often: tenderness.

King adds an extra layer of complexity to Bruce’s parenting style. He an imperfect parent. There are instances when he genuinely does not know how to handle Dick, but tries his hardest anyways. In some ways, that is the most “Batman” trait he has all issue.

King wisely makes that connection with visual juxtaposition. Artist Matt Wagner does a fantastic job transitioning a flashback scene to the present day. In doing so, Wagner and King subtly insert the metaphor of being a parent as similar to being superhero. The metaphor could have been cheesy or  ham-handed if it was overemphasized. Fortunately, both King and Wagner are amazing visual storytellers capable of creating discrete narratives.

Speaking of Wagner’s art, it is a mixed bag. Wagner is a master at storytelling and provides soft lines to make for attractive visuals. However, he seems to struggle drawing children at times. In a few flashback scenes, Dick Grayson’s 8 year-old face looks almost the same as his adult face.

There is also really weird honestly awkward – scene where Batman breaks emotionally for a minute. However, the facials do not quite match up with the emotion Batman’s meant to be experiencing. The entire scene is supposed to be the emotional climax of the issue, but instead just comes across as clumsy.

King and Wagner’s one-shot starring Nightwing is a sentimental journey of two men. It is subtle and fun at the same time. However, in the context of King’s run, it is also superfluous. Still, while it is not able to hit all of its emotional beats, it still resonates well enough for fans of the dynamic duo.