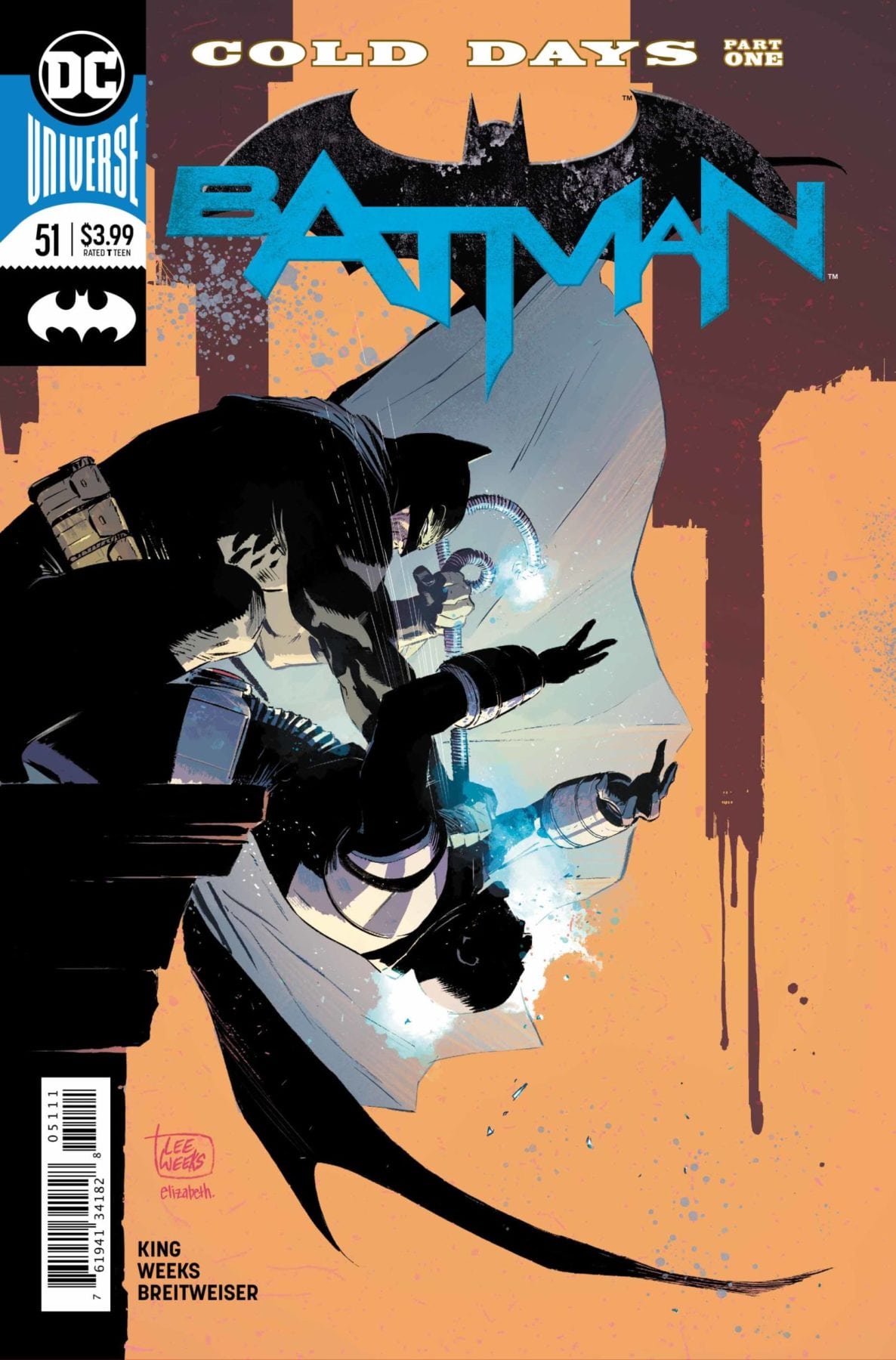 In the aftermath of the wedding, Bruce Wayne gets called in for jury duty.

After the emotionally-weighty wedding issue, writer Tom King wisely chooses to do a smaller storyline with Mr. Freeze. The real focus of the issue is the drama of Bruce being on a jury. It is amusing and fun. In fact, King seems to thrive on stories that take typically larger-than-life superheroes and put them in mundane situations.

It is delightful seeing Batman – an individual who routinely circumvents the justice system – participate in it. Most of the issue plays out exactly as one expects. Bruce has an amusing jury application process and funny interactions with the other jurors over the case.

What’s more, this issue deals with the fallout of the wedding in logical way. It’s subtle, but that’s the secret driving conflict of the story. As readers, we know that Bruce is in a weird emotional place right now, but he cannot express it, because he needs to maintain his secret identity.

Fortunately, guest artist Lee Weeks does an awesome job conveying the secret struggle within Bruce. Each inked line shows with Bruce’s facial emotions. It is a perfect blend of faux-happy and hidden angst. It says everything about how Bruce feels without literally spelling it out. This all leads to King’s surprise cliffhanger ending, which is surprising and slightly confusing in a good way. 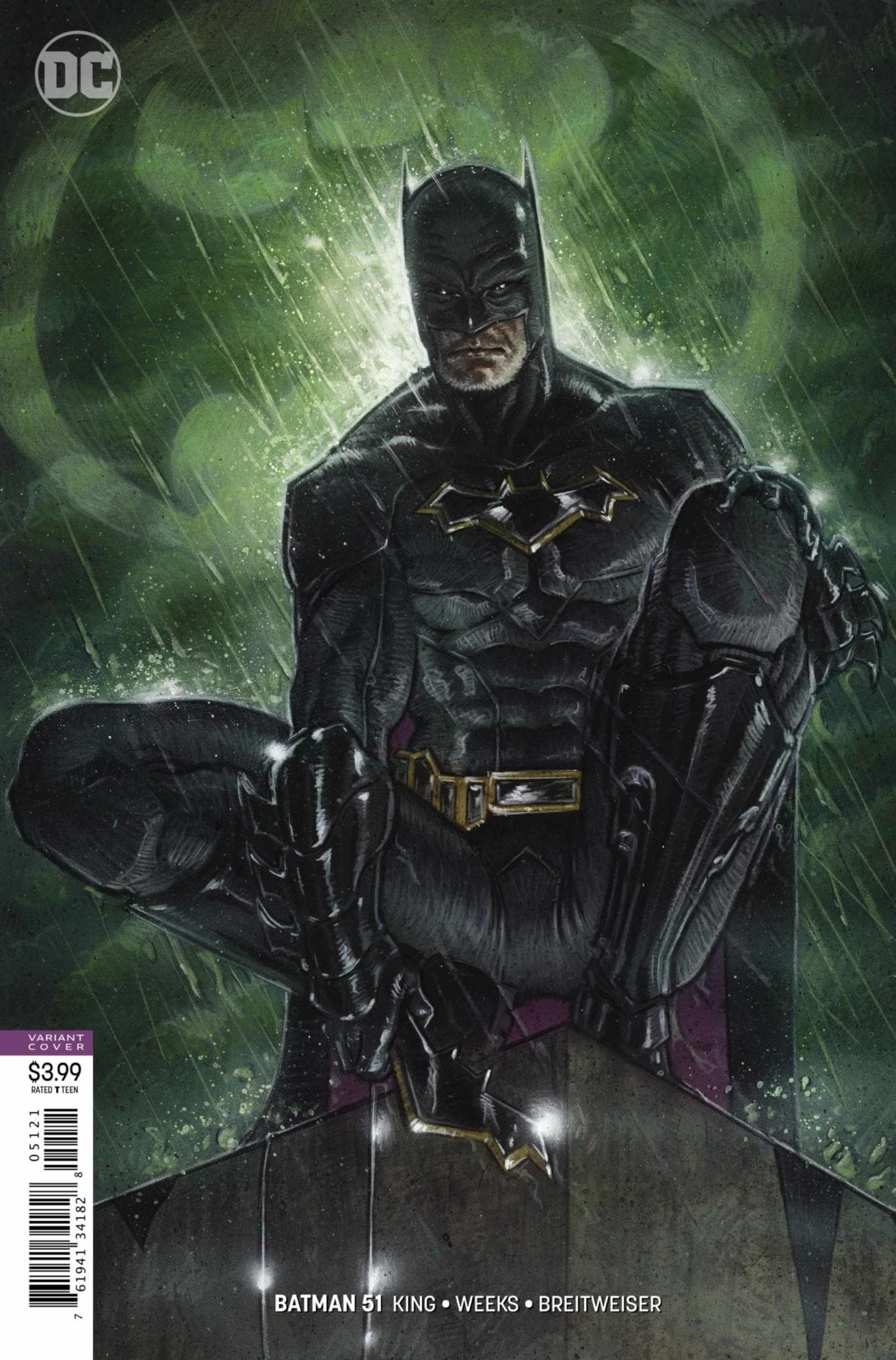 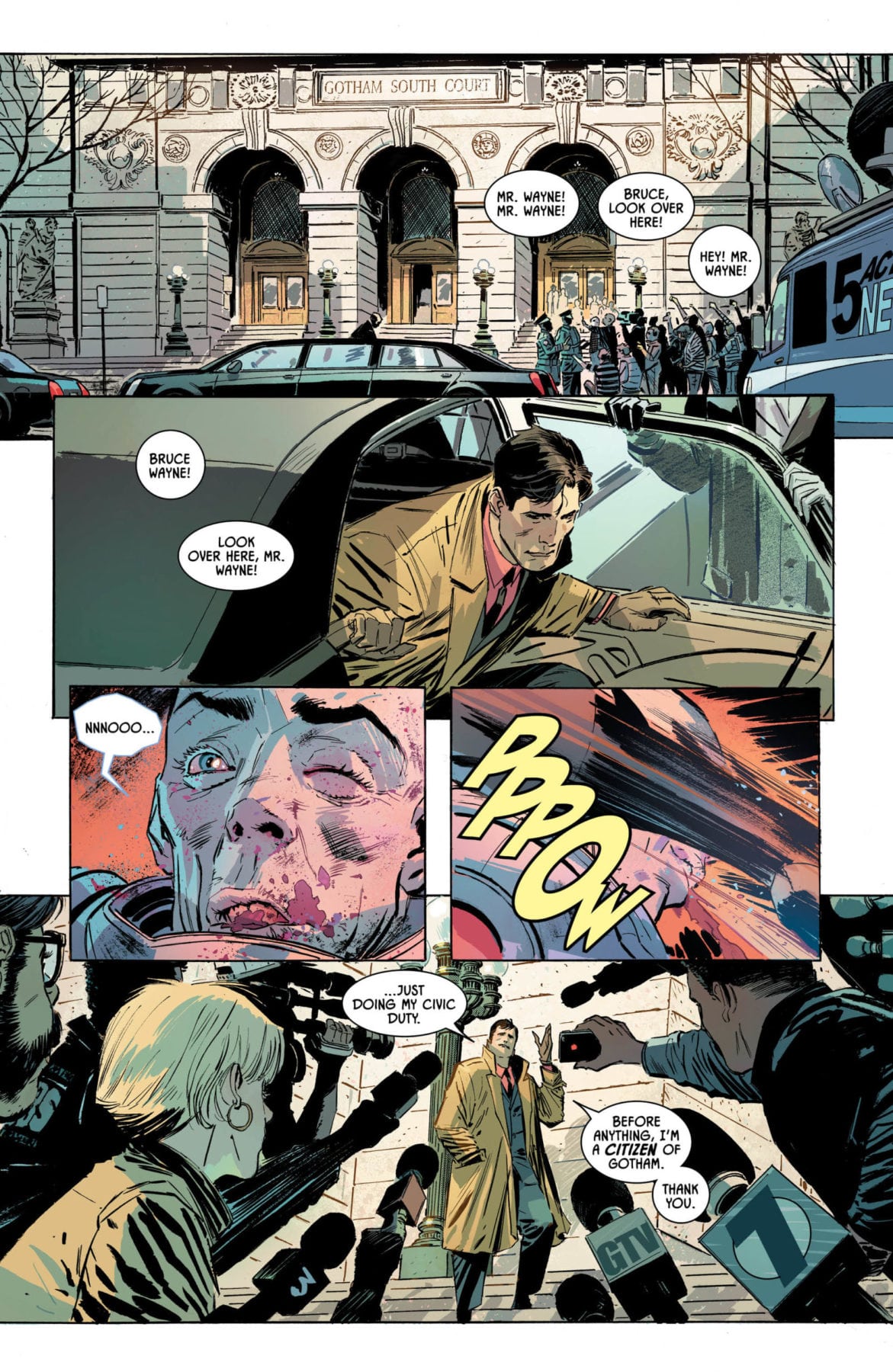 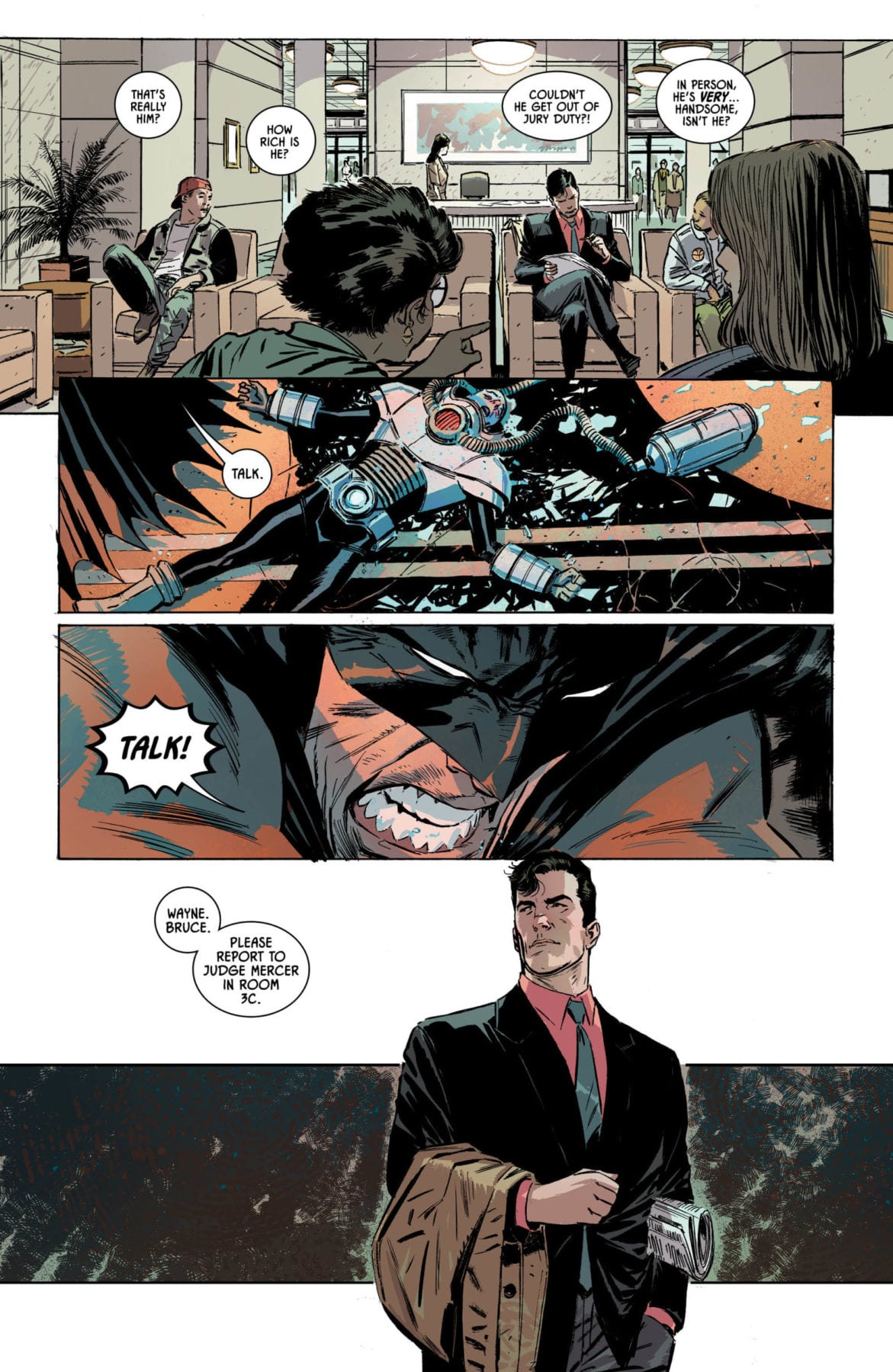 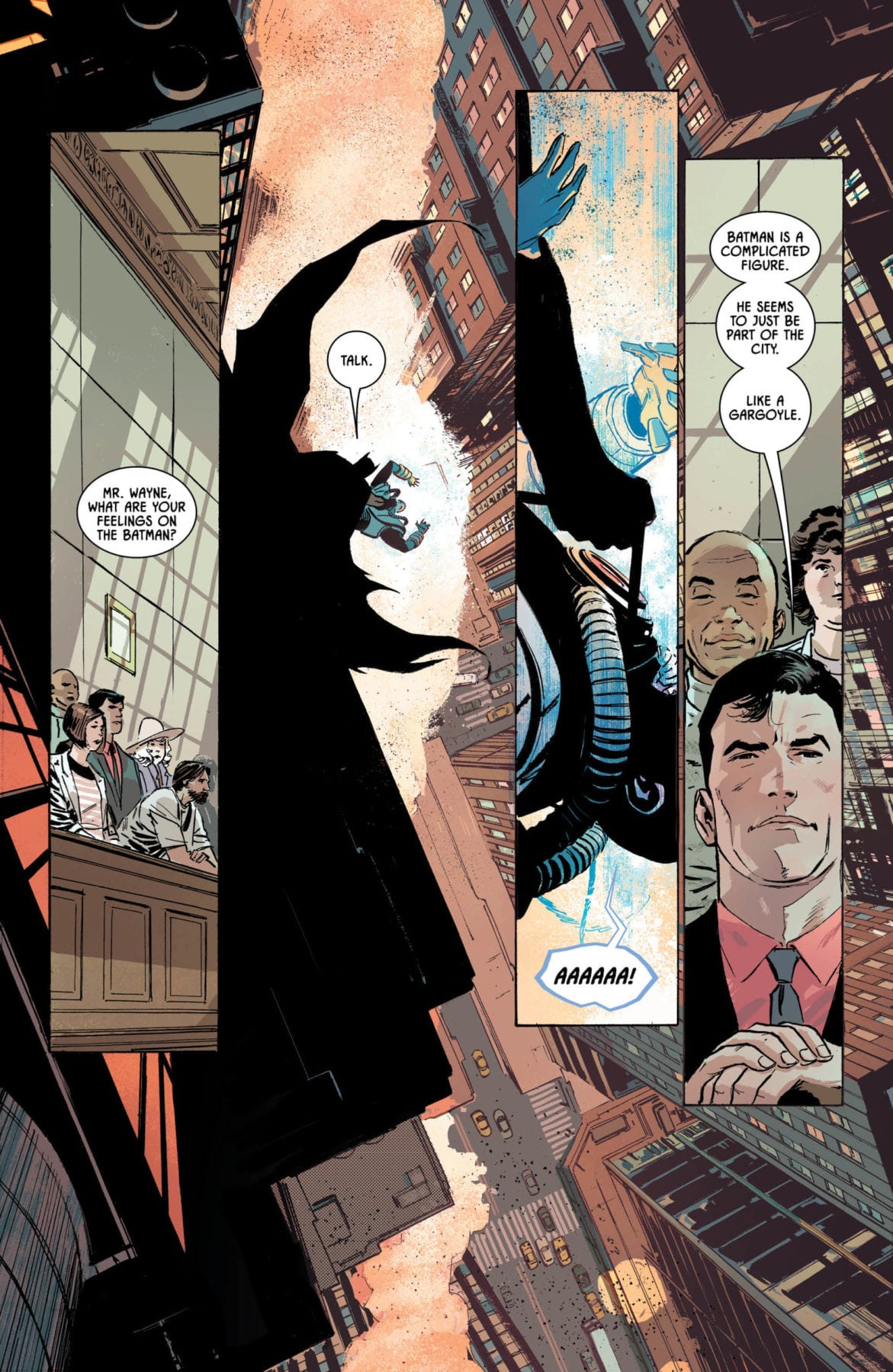 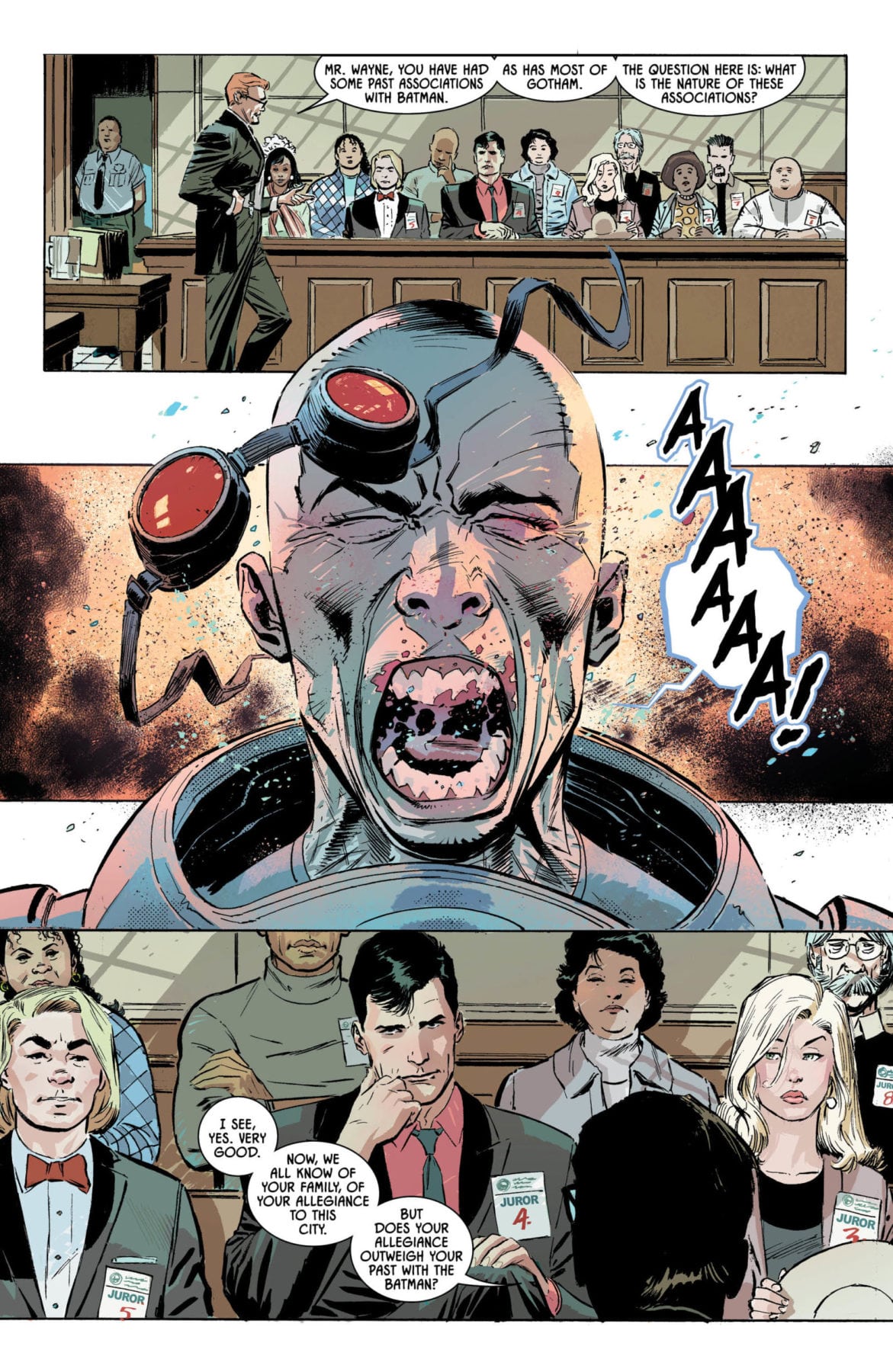 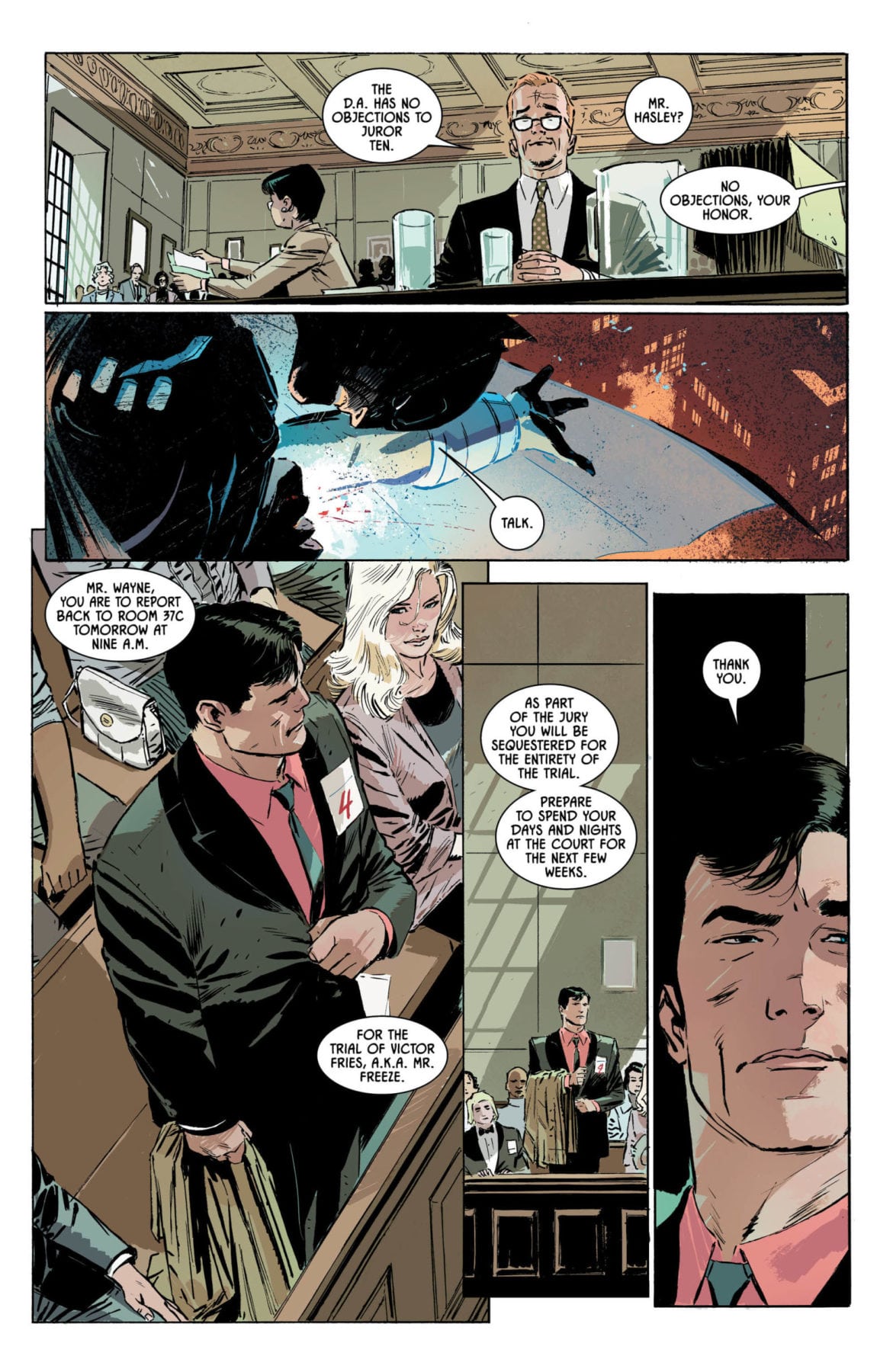 One critique of the story is how weirdly underpowered Mr. Freeze is. As one can see on the cover, the villain gets a real thrashing in this comic. The focus is not really on Mr. Freeze’s crimes and that is okay. I did not expect him to be the the primary focus, but wow, he went out a like a punk. King tries to address this by dropping in a line about how Batman was more intense than normal, but it’s just lip service which will make it difficult to see Mr. Freeze as a credible threat in future stories. Like, why use Freeze at all? It could have been easily a generic bad guy or Kite-Man.

Also, it’s hard reading this issue without thinking about the seminal Batman: Gotham Adventures #35. This classic story also features a similar premise with Bruce on a jury. While different from King’s tale, it does highlight one important difference: Bruce’s honesty while under oath.

In Gotham Adventures, Bruce revealed that he is Batman when asked if there is anything that will make him biased in the case. Here, Bruce does not deny he is Batman, but he is certainly not as forthcoming with the truth. There is also the fact that Bruce was still publicly-known as the CEO of Batman Inc. in this continuity. Certainly that should make him biased in a Batman case? These omissions are strange and feels out-off-character.

This issue is the follow-up to the heavy wedding comic that this title needed. It’s light, while still progressing the overall storyline. It also keeps some deep characterization and clever humor. I do have some nitpicks with some of Bruce’s choices and the treatment of Mr. Freeze, but overall, they don’t drag down my enjoyment of this story.