Appearing in Batman #1 in 1940, Catwoman has been around almost as along as the Batman, who first appeared in Detective Comics #27 in 1939.

Throughout those almost 8 decades, they’ve appeared in every form of media together, from their comic book origins to television, (animated and live-action) to film, to video games. Catwoman is so important that an interpretation of the Batman almost can’t be considered definitive if his feline counterpart isn’t there too.

During his 79 year history, both Batman and Bruce Wayne have had many romances. Vicki Vale, Julie Madison, Talia Al Ghul, Wonder Woman, the list goes on. However, as complicated as their relationship has been, the Bat and Cat always seem to gravitate towards each other.

With the wedding of the year happening earlier this month, our friends at Vulture put together this nice timeline that showcases the long history of Batman and Catwoman’s “will they won’t they” relationship.

Spoiler Warning for ‘Batman #50’ at the end of this. You’ve been warned. 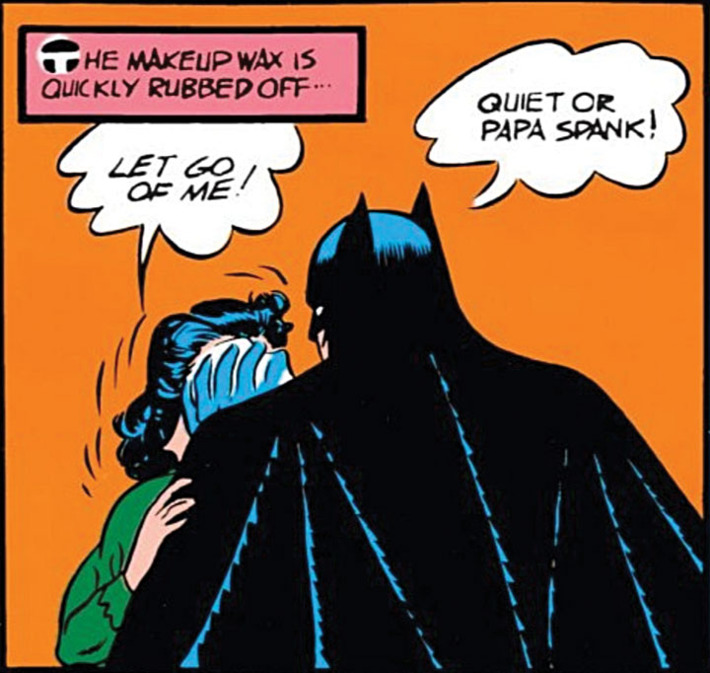 Selina Kyle a.k.a. Catwoman, or just “The Cat” back then, debuts (along with the Joker… what an issue!) With a very wouldn’t fly today line of “Quiet or papa spank!” from Batman to Selina, this relationship was off to an aggressive start.

Dick Grayson, a.ka. Robin, is essentially Bruce Wayne’s adopted son at this point. Sensing (fearing?) he is losing the attention of his mentor he asks “What’s got into you? What about…us?” Batman replies “Patience, m’lad, you’re too young to understand these things!” Sorry the poor boy is scared of losing his second father in one lifetime, Bruce. 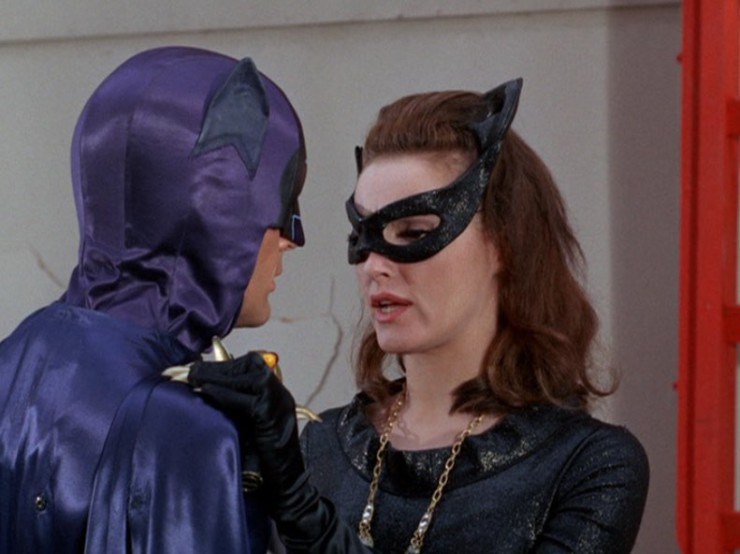 Catwoman nearly shoots Batman, but then says “I can’t kill the only man that I’ve…” before they can kiss Robin interrupts. God dammit Robin!

Although Catwoman was pretty much a pure villain throughout the TV show, and 1966 film based on the show, their sexual tension was sprinkled in from time to time.

An important thing to note if you’re not a comic book reader is that there are multiple versions of Earth (both in Marvel and DC). While the characters themselves are usually the same, this allows writers creative freedom to tell new and/or alternate stories that don’t effect the main continuity.

This is the case in 1977 where on Earth-Two Catwoman gave up her life of crime to marry Batman. The two ended up having a daughter, Helena, who would grow up to be Huntress. 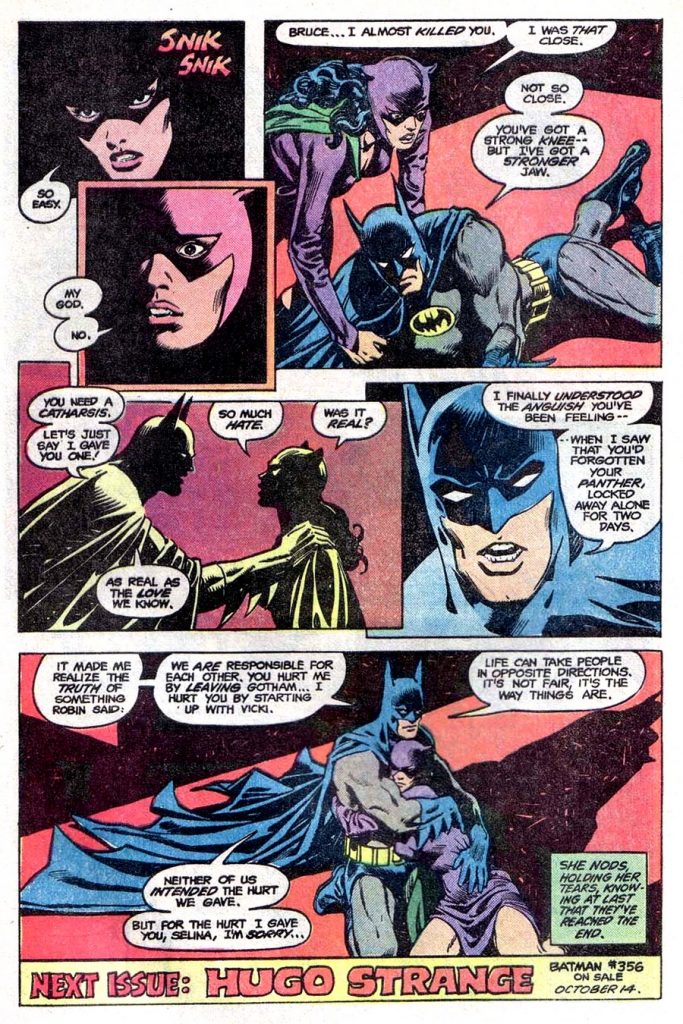 Jealous of Bruce’s relationship with Vicki Vale, Catwoman nearly slashes his throat. She asks “So much hate. Was it real?” “As real as the love we know” he replies. Bruce must’ve sensed that given the lives they lead a real relationship between them isn’t possible. 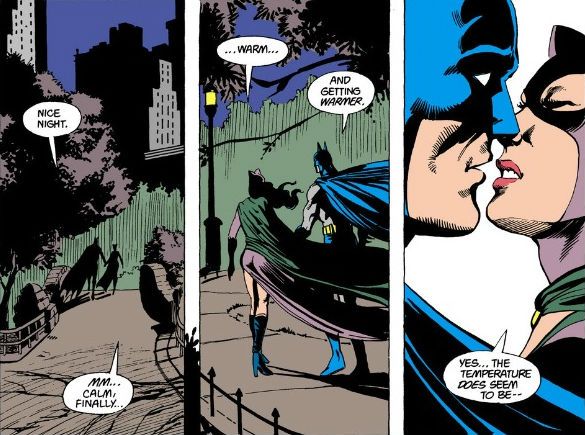 Catwoman asks Batman on a date. “Well? Or do I have to purr in your ear?” He replies “No…but maybe later you could scratch my back.” You’re playing with fire Bruce, but I like your style. 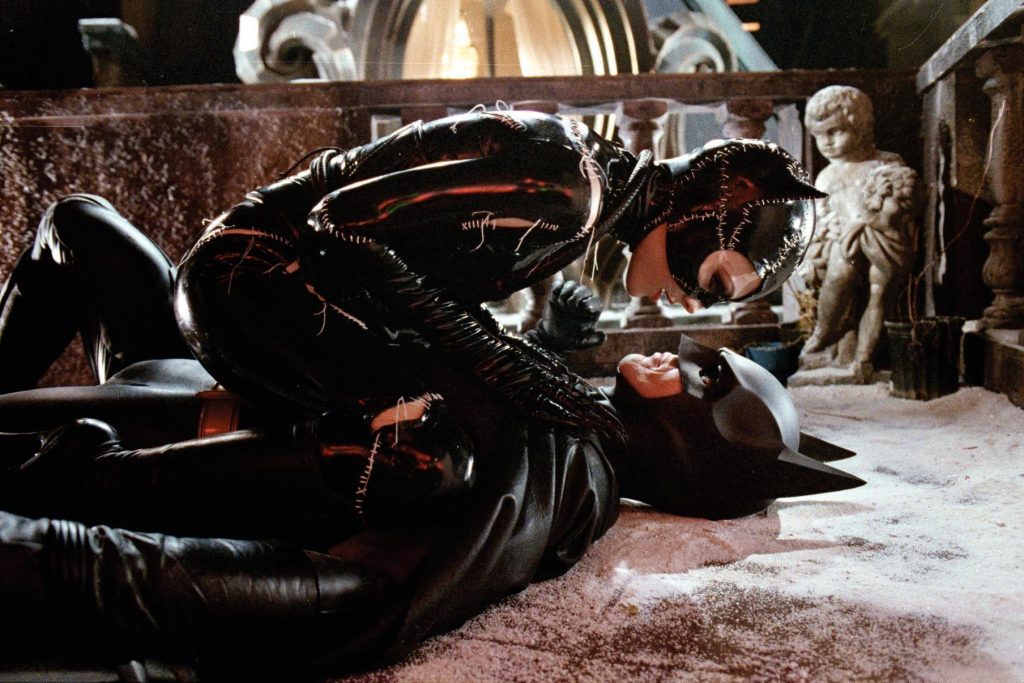 Throughout the film, Batman and Catwoman, and their alter-egos Bruce Wayne and Selina Kyle, pursue separate relationships, unknown who the other really is. During the end of a fight earlier in the film, Batman tells Catwoman “Mistletoe can be deadly if you eat it.” She replies “A kiss can be even deadlier if you mean it.” Those lines would later be reversed by Selina and Bruce, causing them to uncover each other’s secret identities. Bruce pleads with Selina to stop her bloodlust to be with him, but she refuses. These two can never be happy, can they? 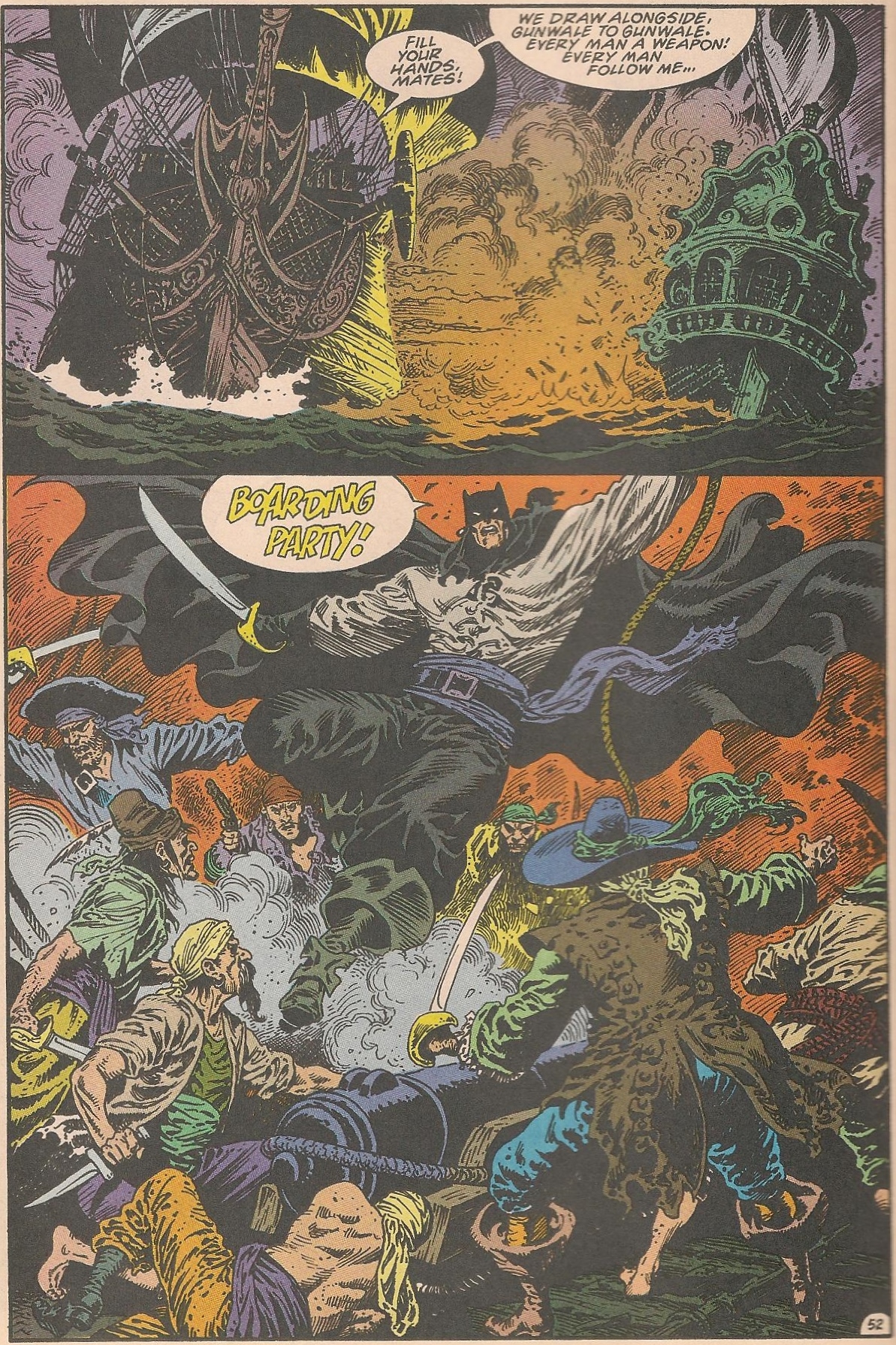 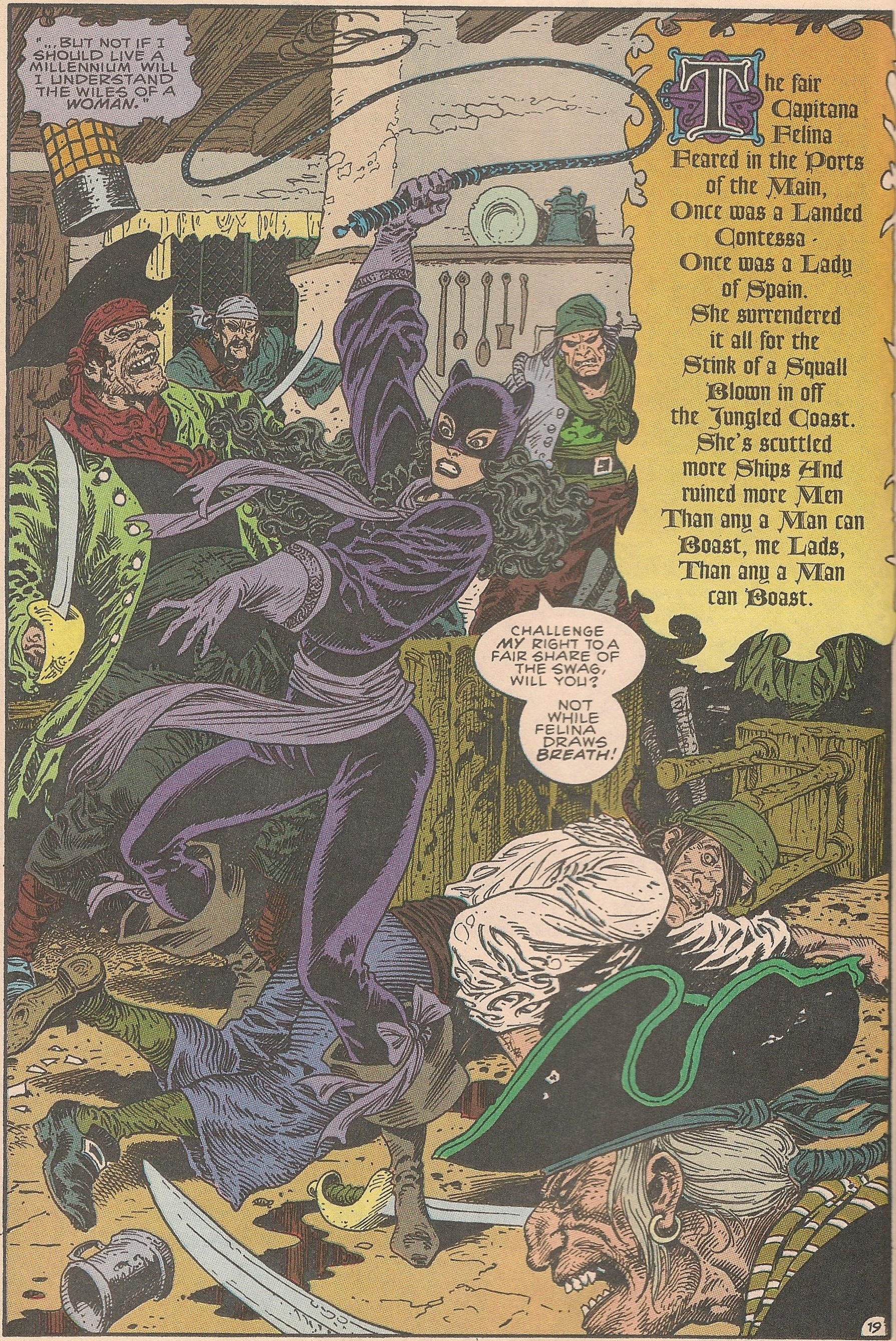 Another alternate reality, this time Batman and Catwoman are rival pirates. They eventually wed and become king and queen of the high seas. Okay… 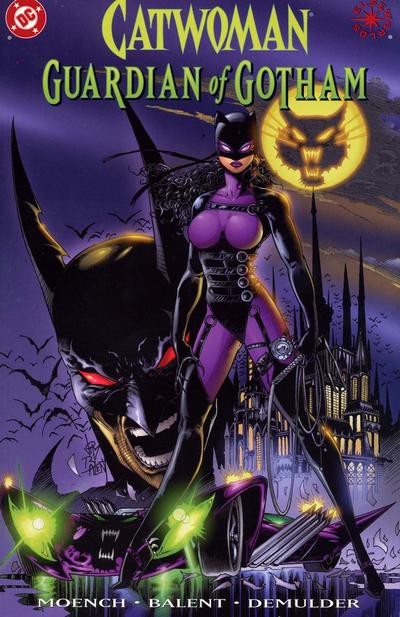 Dipping into alternate reality again, only this time Catwoman is the hero and Batman the villain. She learns his identity is Bruce Wayne, her husband, and turns on him. The hammer of justice is unisex! 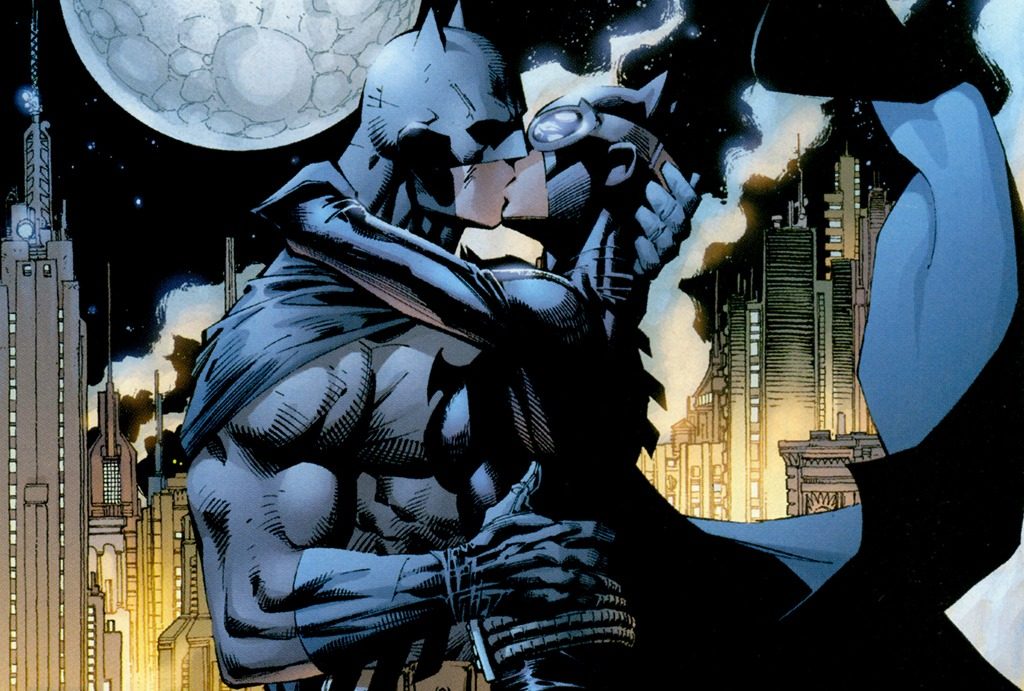 This takes place during the story Hush. Batman gives in to his feelings for Catwoman and shows the ultimate display of trust and reveals his identity to her as he confesses his love. However, ever the paranoid person he is, Bruce suspects his brain was tampered with and ends their relationship.

This story is what really started the modern romance between these two characters and started to turn Catwoman in a more heroic character. 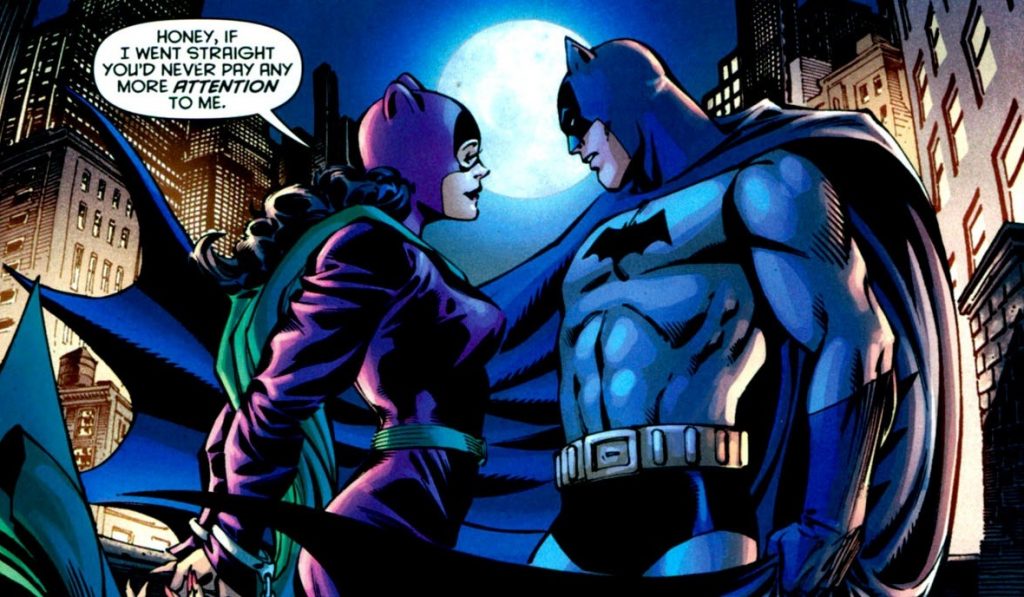 During a time when Batman was presumed dead after his battle with Darkseid, Catwoman delivers a eulogy at his funeral recalling how they fell in love. 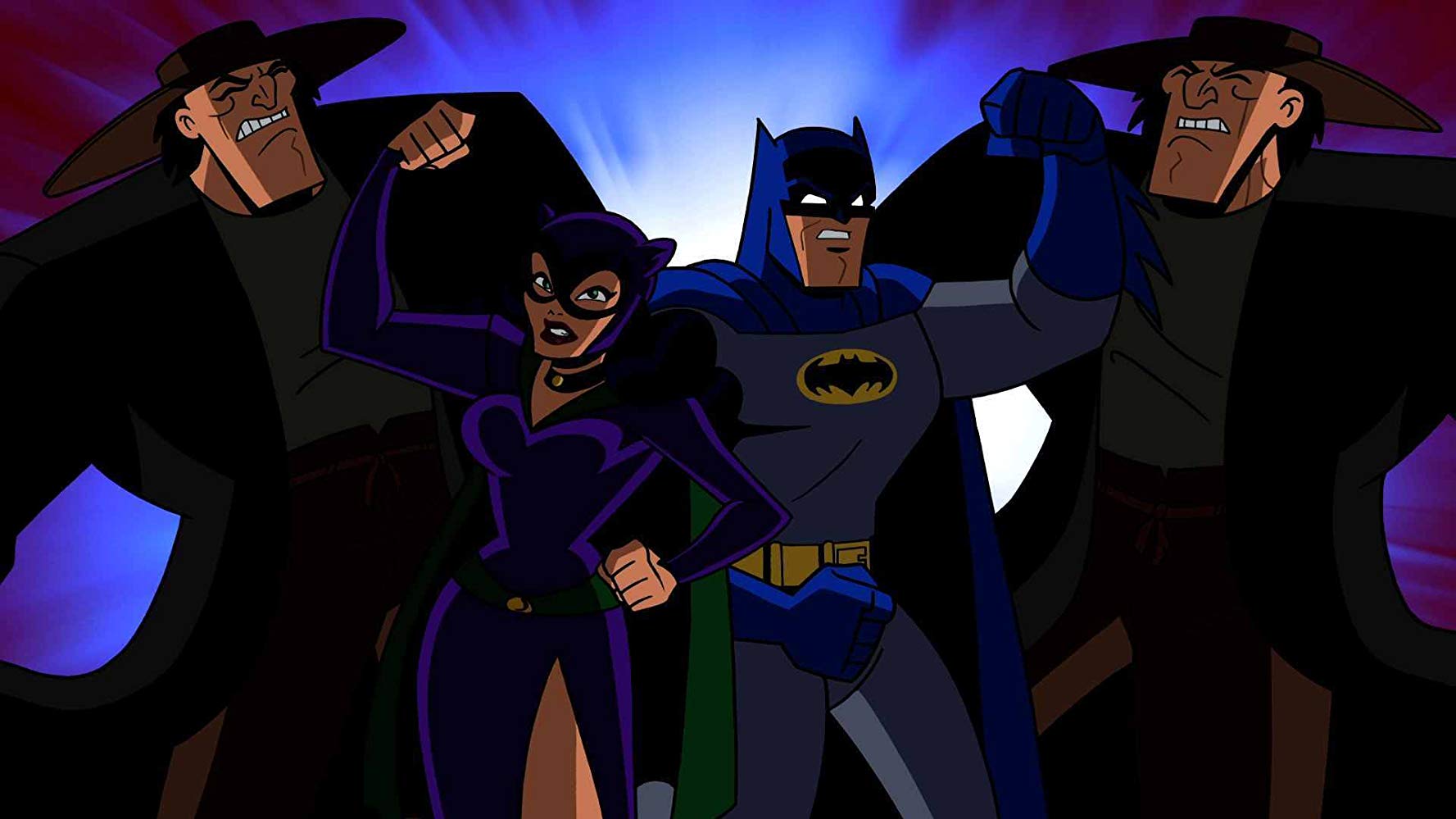 Batman: The Brave and the Bold, “The Knights of Tomorrow!”

Batman and Catwoman marry and have a son named Damian (also the name of Batman and Talia’s son in the comics, fun fact!) It is revealed this was fan-fiction written by Alfred. 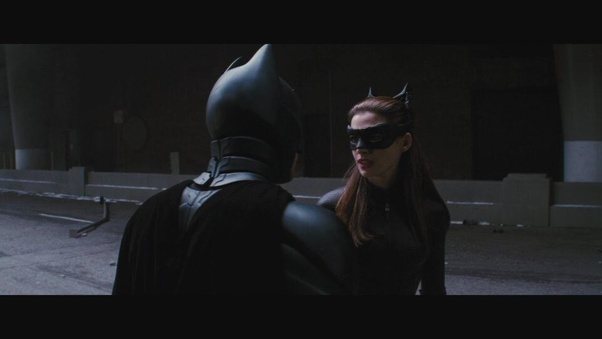 The third live-action interpretation of Batman and Catwoman’s relationship. Selina Kyle is a thief trying to start a new life for herself. Her entanglements with Bane and the League of Shadows cause her to betray Batman. When she learns he’s really Bruce Wayne, she makes it up to him by helping him defeat Bane and Talia’s army. With Batman and Bruce Wayne presumed dead, he runs away with Selina to start a new, happy life together. 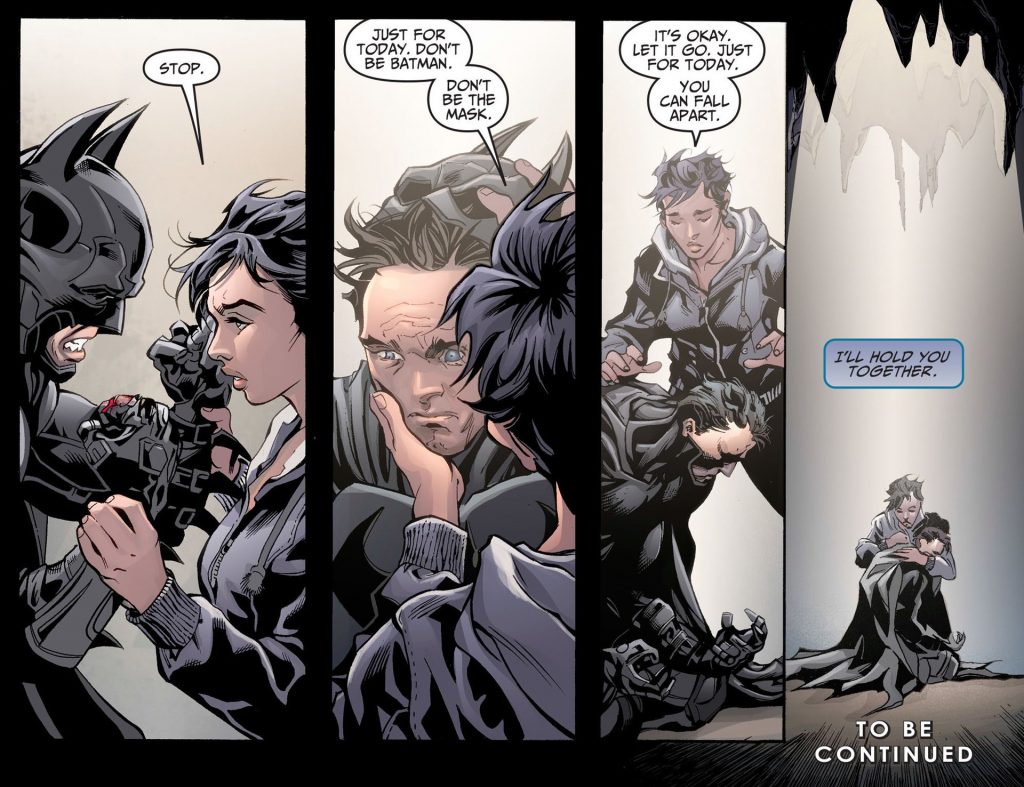 Injustice: Gods Among Us #17

Based on the video game of the same name, this comic book series takes place in an alternate world where Superman lost his mind. The Joker tricks The Man Of Steel into killing Lois Lane and their unborn child, which in turn triggers a nuclear bomb that destroys Metropolis. Full of rage Superman murders The Joker and takes over the world. Batman leads the resistance against him, and in a moment of weakness Catwoman comforts him, “You can fall apart. I’ll hold you together.” 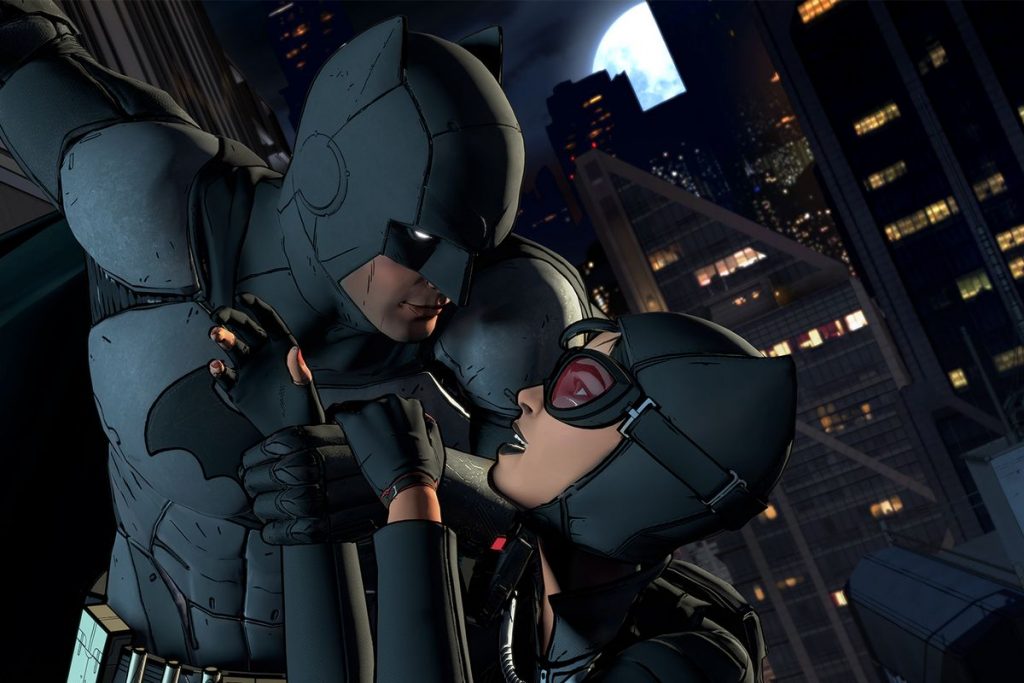 Catwoman and Selina Kyle are major characters in this episodic point-and-click adventure game. Controlling Bruce Wayne, players are able to make their own choices throughout the story, including whether to pursue a relationship with Selina or not.

Batman and Catwoman have sex on a rooftop, thus beginning their current continuity relationship. Who said romance is dead? 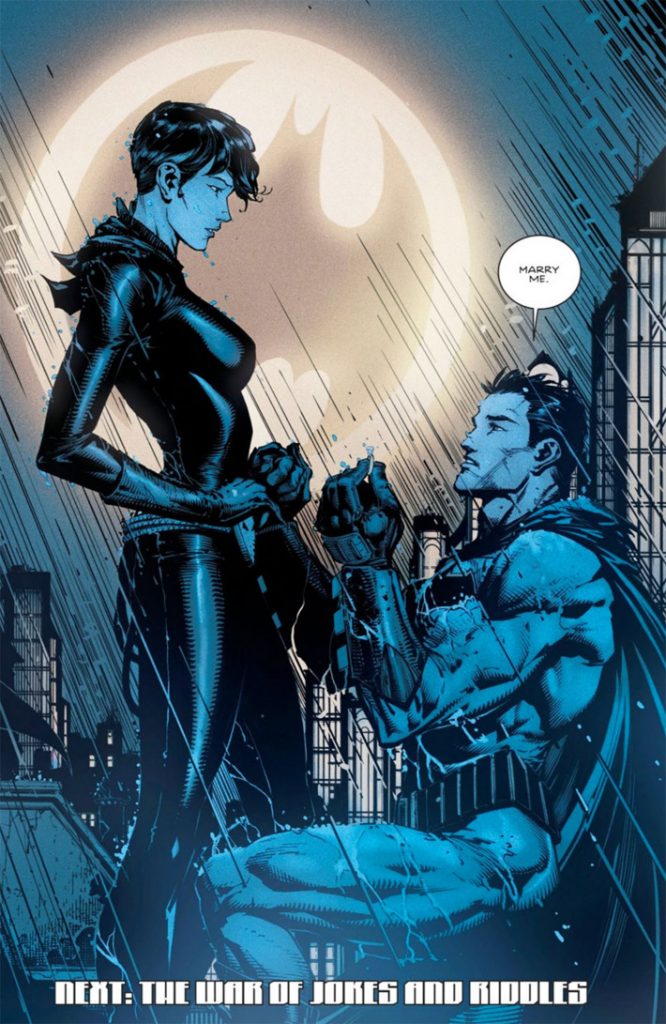 Batman finally pops the question on a rooftop in the rain. The Dark Knight unmasks, gets down on one knee and says “Marry me.” The fact that they were both in costume yet unmasked is a great touch to be honest. 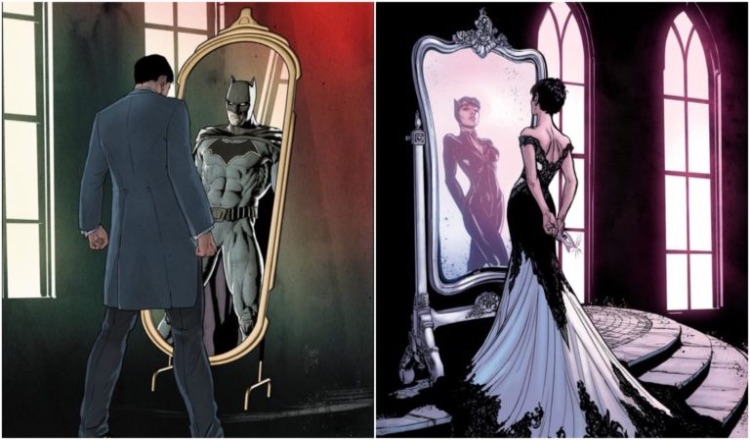 Despite Bruce Wayne being one of the richest fictional characters in history, Catwoman just can’t help but steal a $28,000 wedding dress. I guess she wanted to save that money for the honeymoon? 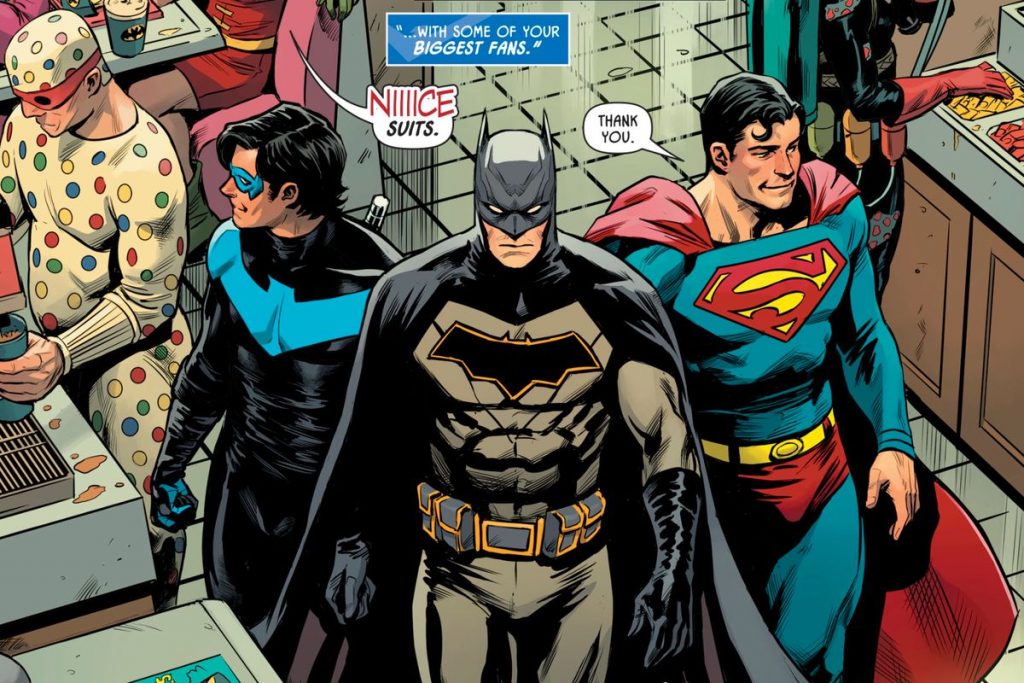 Batman: Prelude to the Wedding: Nightwing vs Hush #1

First of all, that’s a mouthful of an issue title. Second of all, with so many allies and adopted sons, Batman struggles to name his best man. He eventually picks Superman. 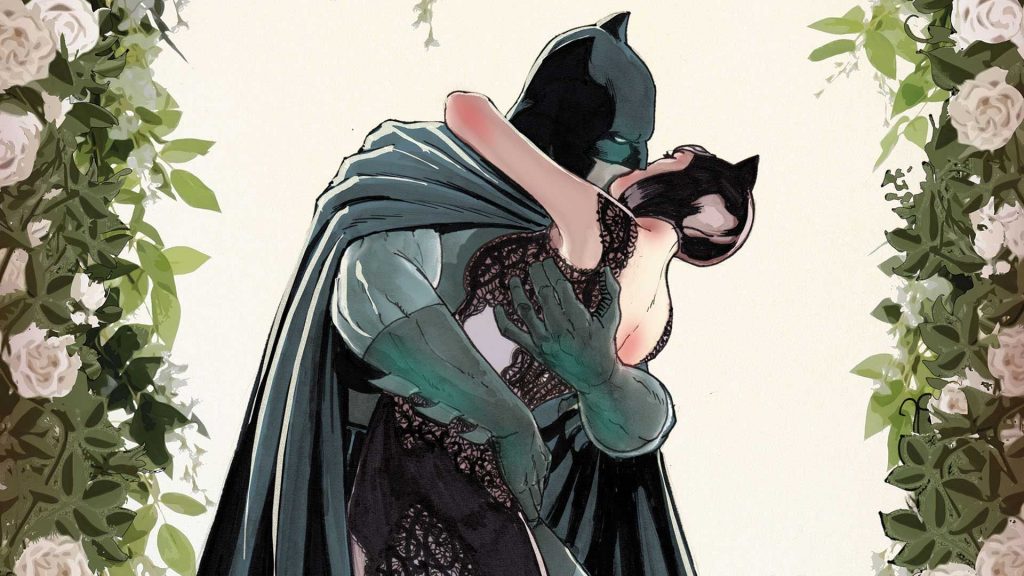 The wedding day we’ve all been waiting for finally arrives, and yet, Catwoman doesn’t show. Realizing a blissful wedded life with her could make Bruce Wayne cease to be Batman, she decides not to go through with it.

It’s very depressing that these two characters were so close yet so far, but it’s a very selfless act by Selina realizing that the world needs the Batman and she shouldn’t take him away from them.

There you have it, the long and winding romantic history between Batman and Catwoman. Which version of they relationship is your favorite? Do you think they deserve a happy ending, or is it never meant to be? Let us know!