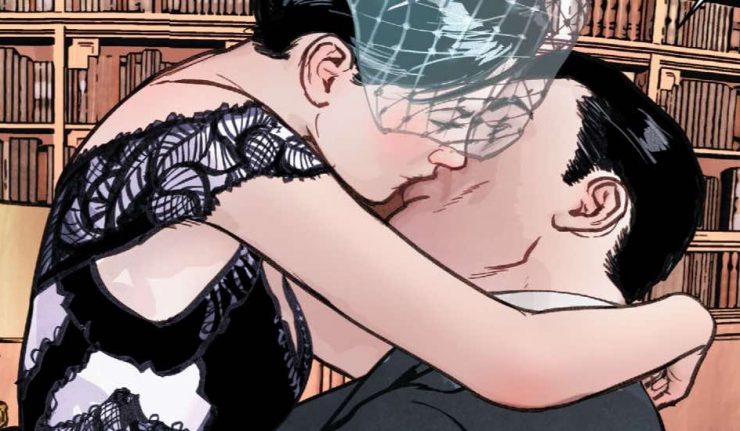 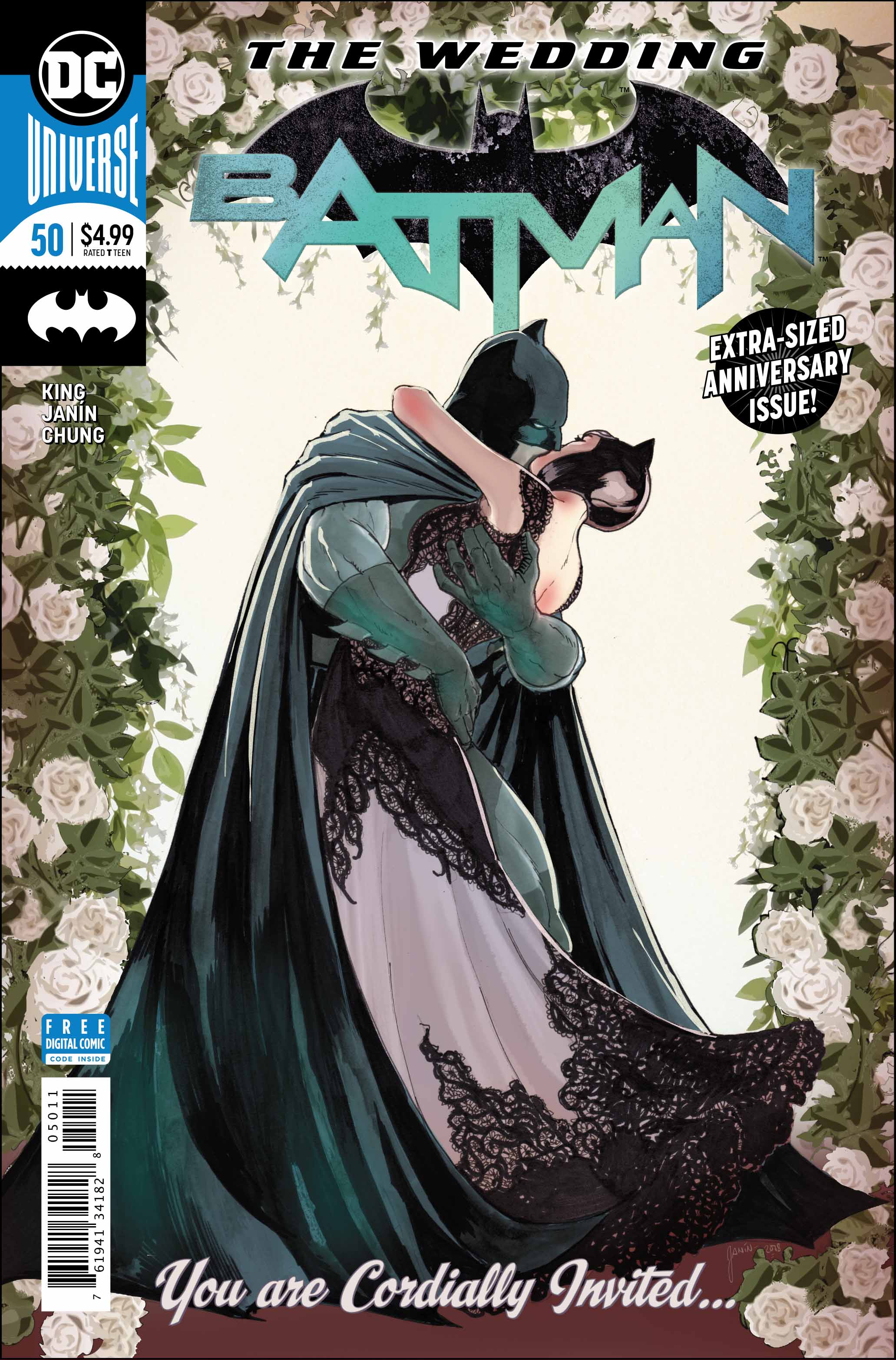 So this is it. The big anniversary-sized wedding issue. Fortunately, this issue goes beyond the spoilers and gives some good surprises and heartfelt moments that makes it worth buying.

There is no getting around the elephant in the room: the enjoyment of the comic is somewhat muted by the leaked ending. However, writer Tom King and main artist Mikel Janin do the impossible and made a memorable issue despite the spoilers.

The issue divides into three parallel, but intersecting narratives. One is the actual plot of the wedding. The second is Bruce’s love letter to Selina. And the last thread is Selina’s love letter to Bruce. King does a wonderful job of weaving the three story threads together and having them intersect at the right time.

The letters are an interesting character piece that show what Catwoman thinks of Batman and vice versa. Like any good character work, it is flawed, romantic, and fun all at the same time.

Of course, the love letters are really an excuse to showcase a series of Batman and Catwoman pin-ups drawn by some of the greatest comic artists. They are slightly superfluous, but King manages to integrate them into a cohesive narrative. The pin-ups tell a brief arc told solely through the pictures. Without any words, King sums up Catwoman and Batman’s whole relationship from foes, to reluctant allies, to lovers. It is the perfect recap and an excellent use of artistic splash pages. 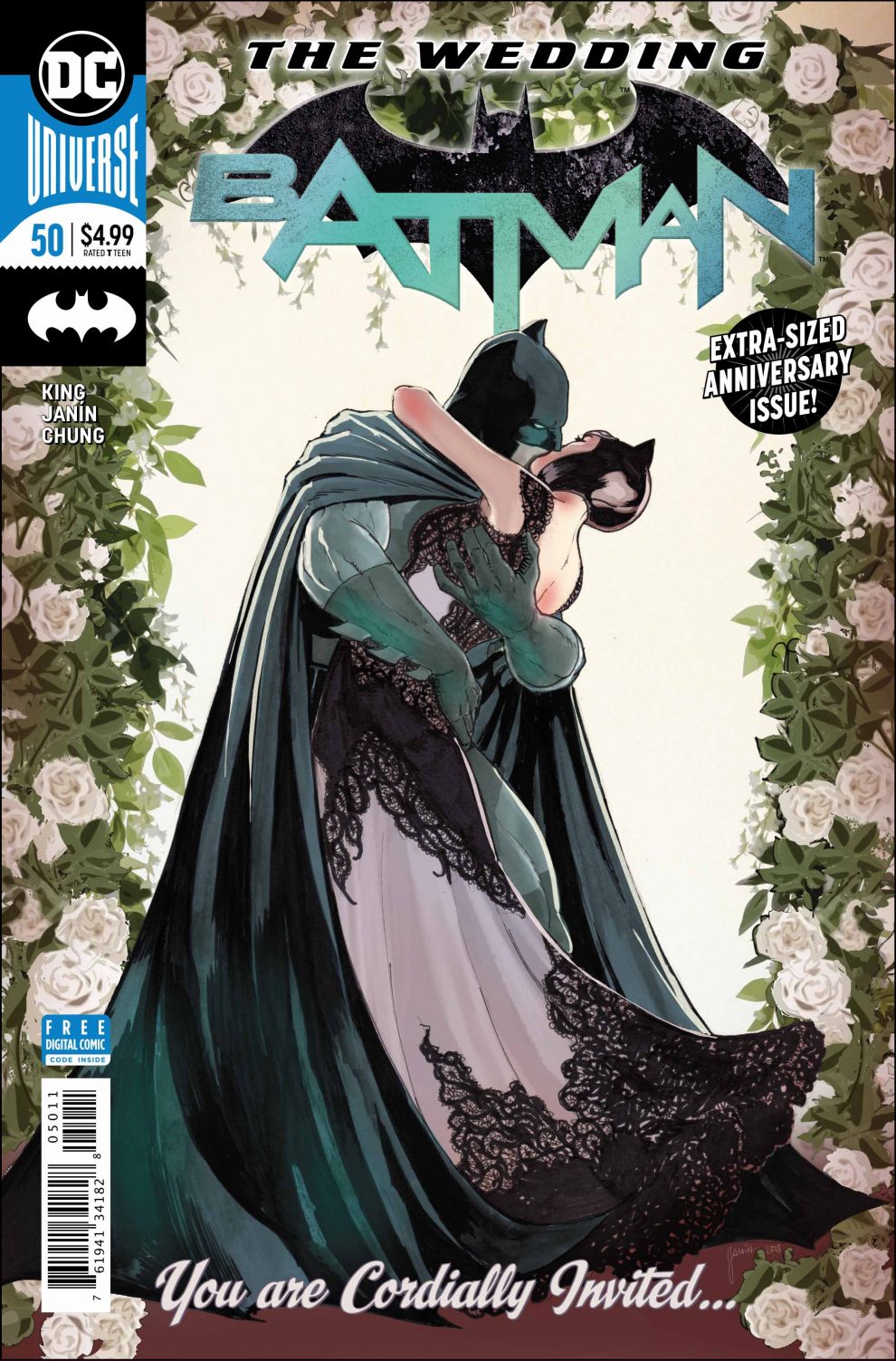 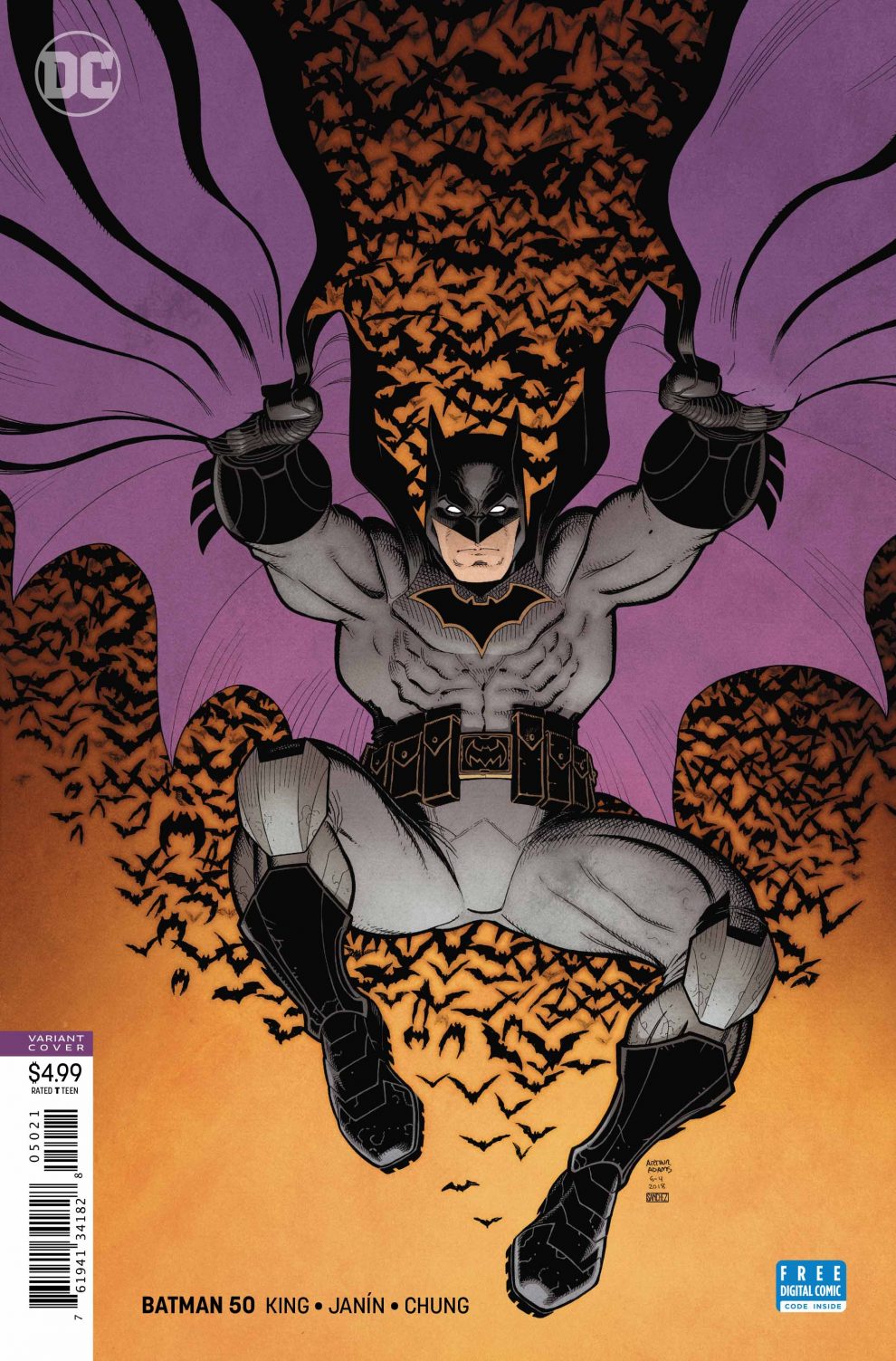 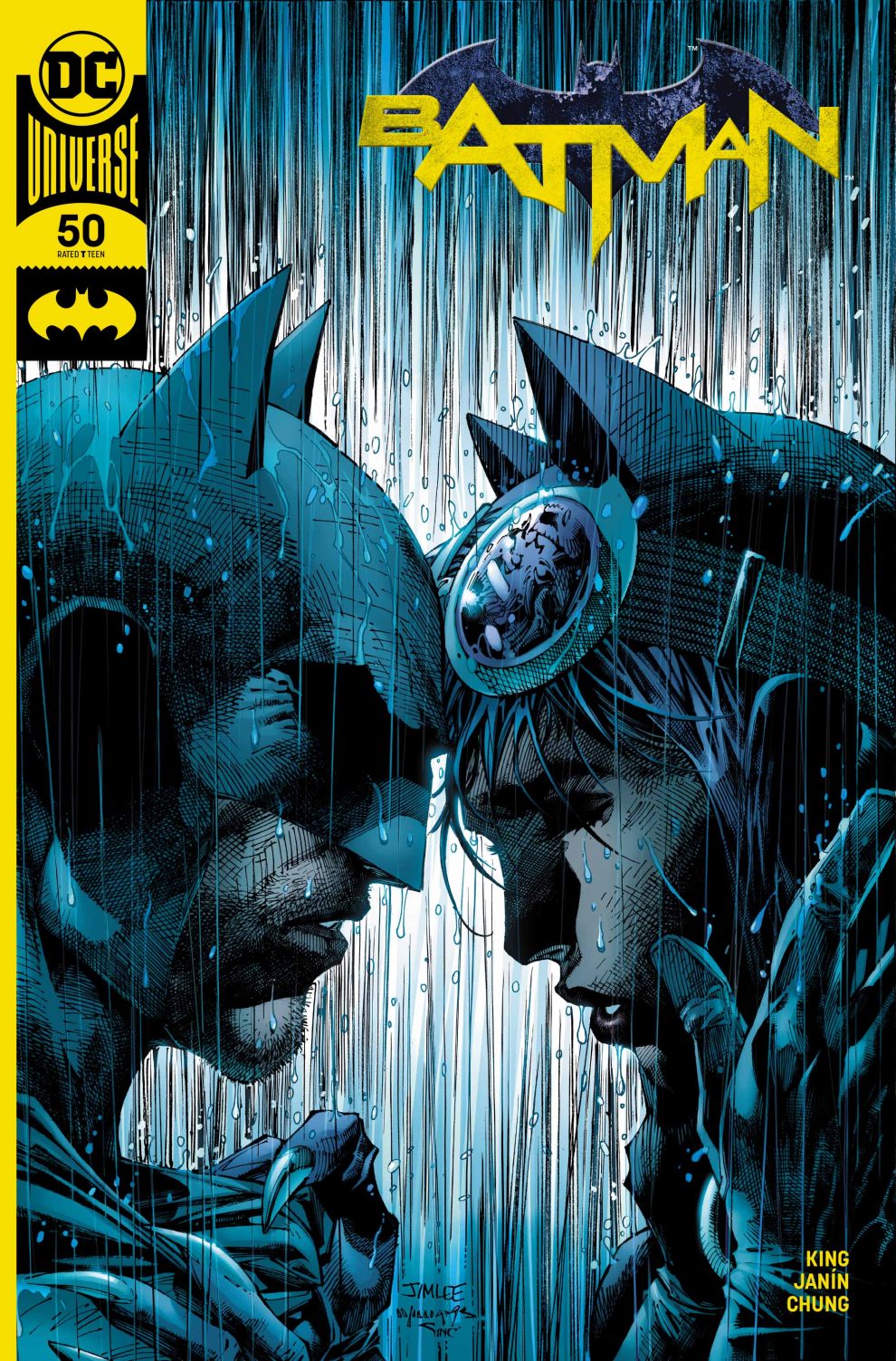 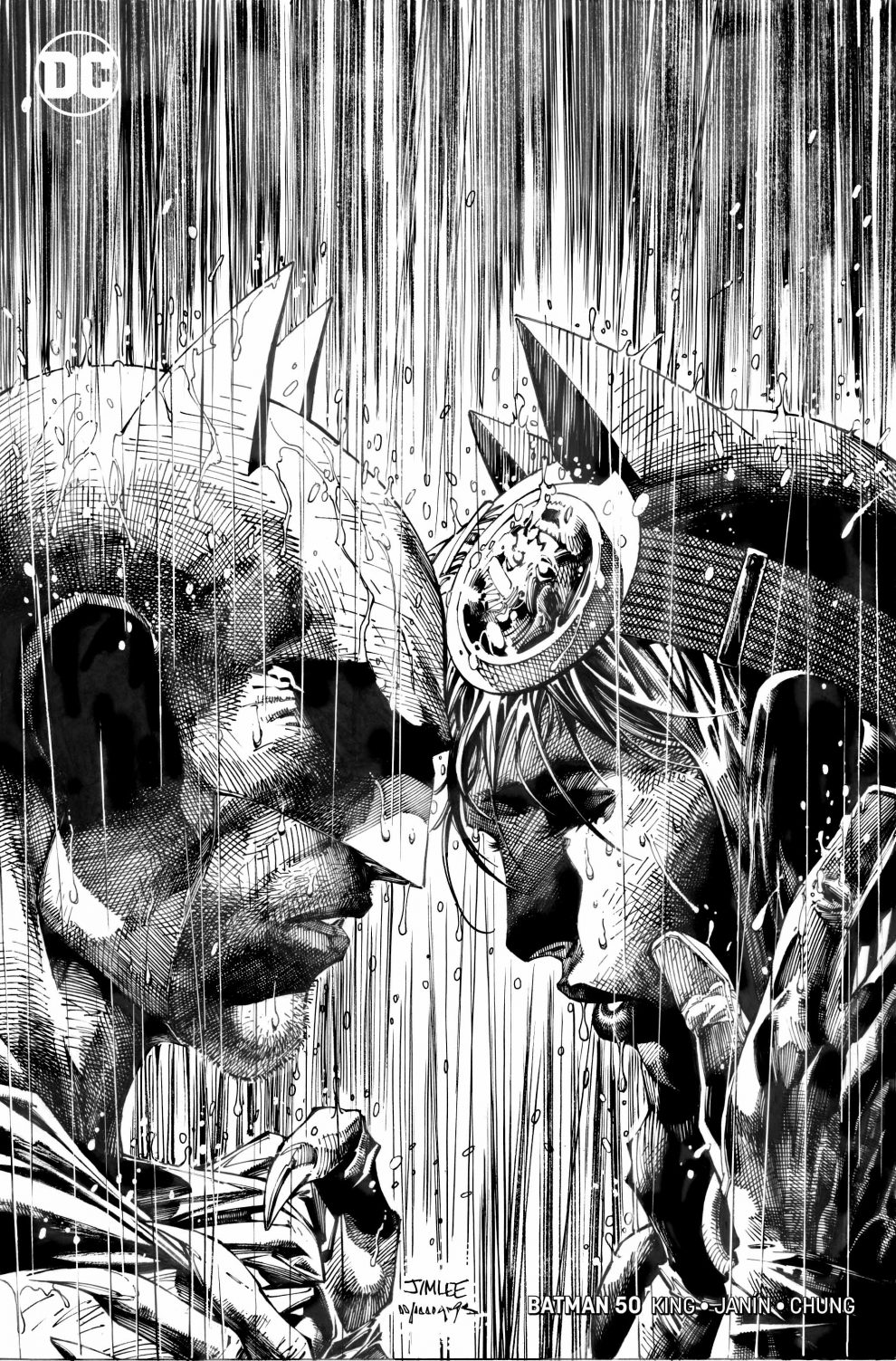 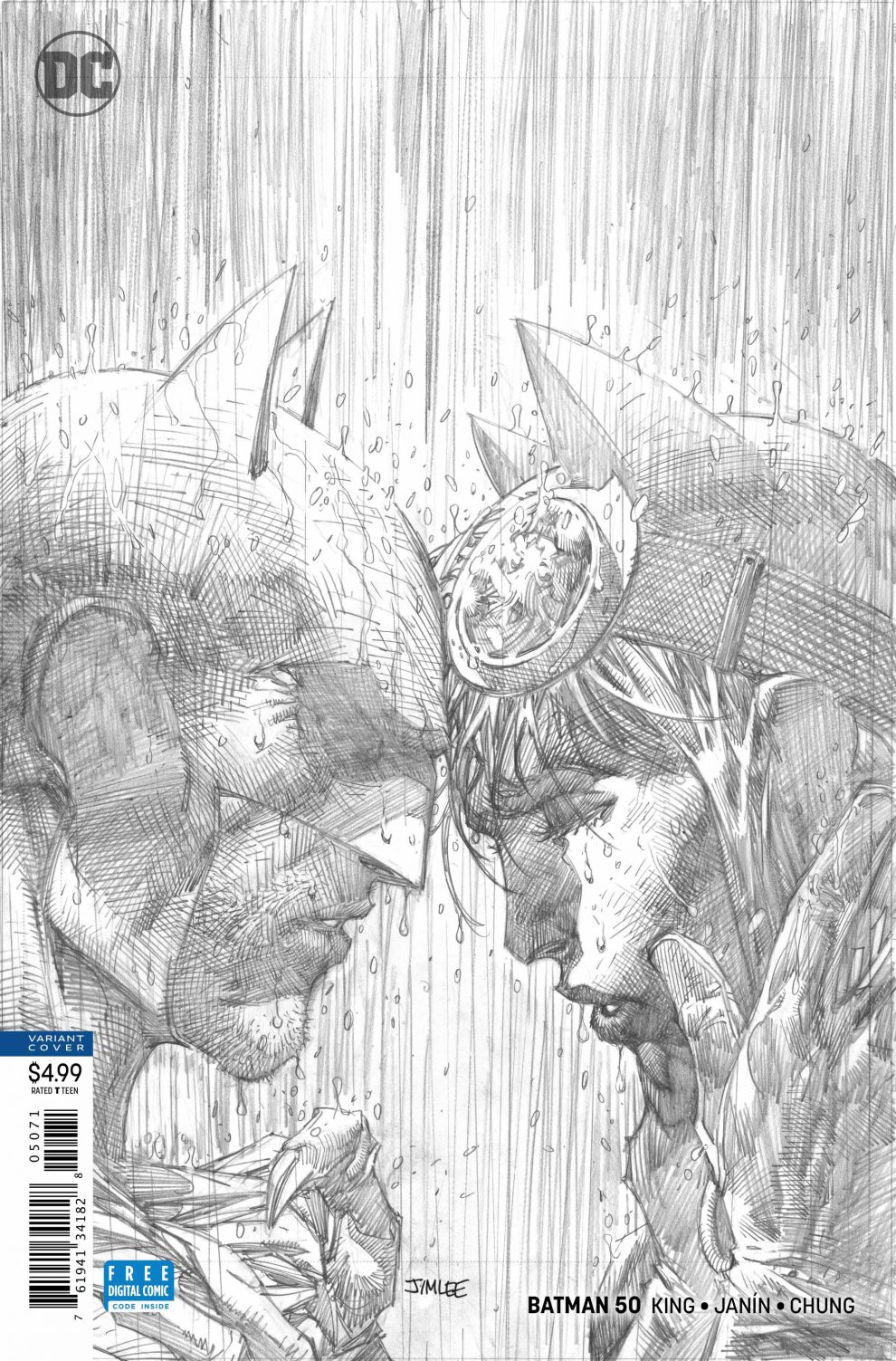 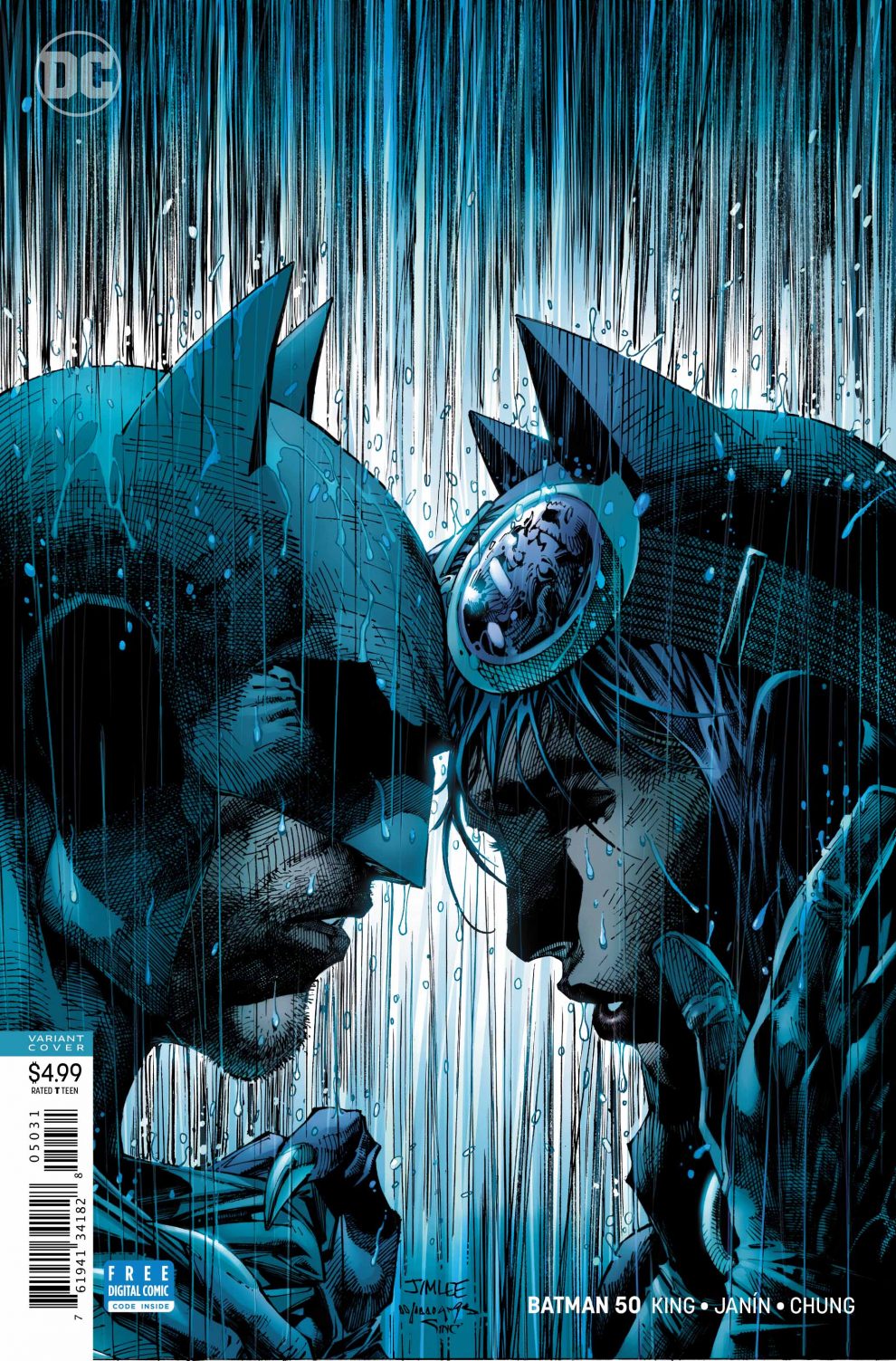 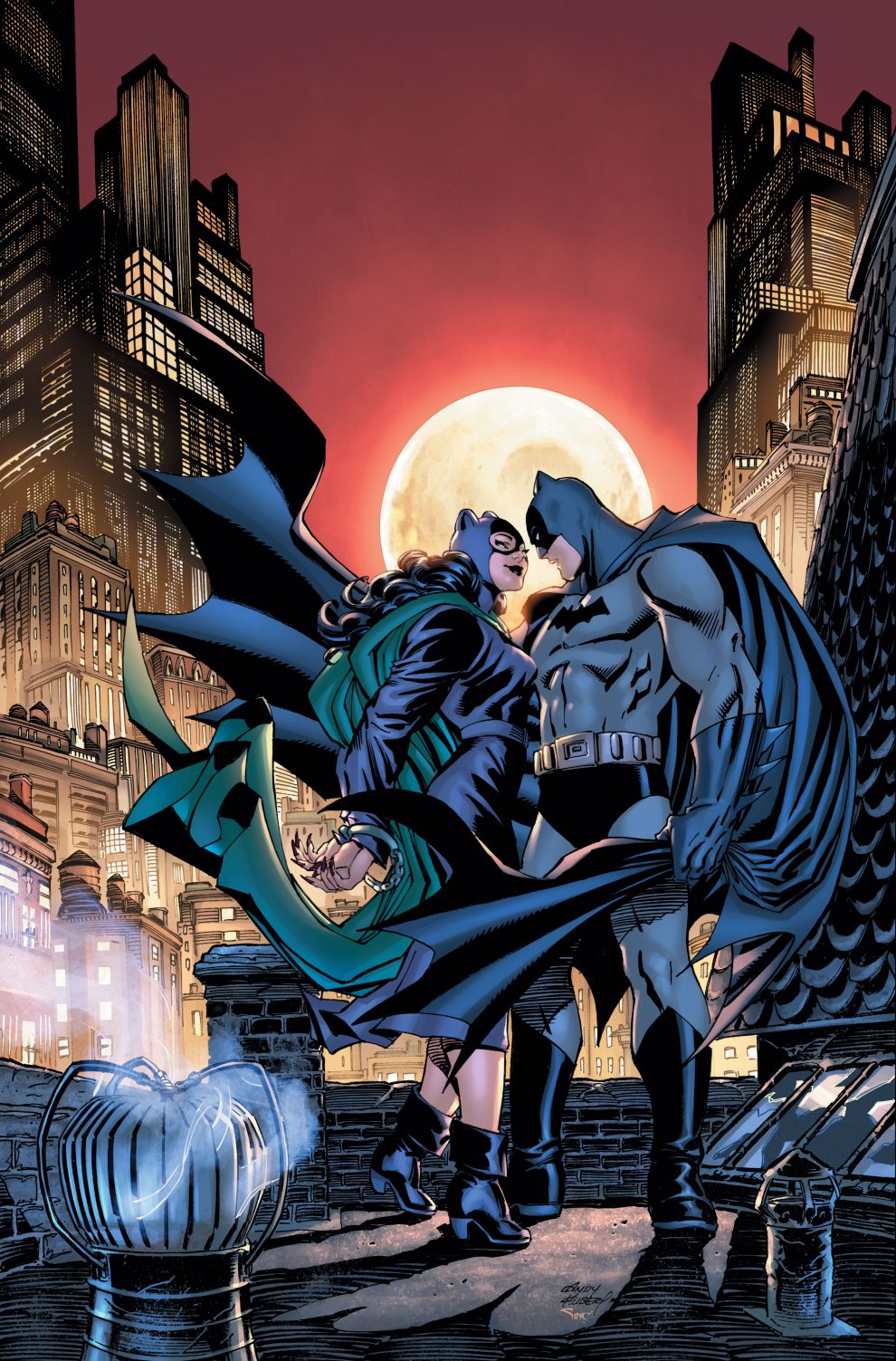 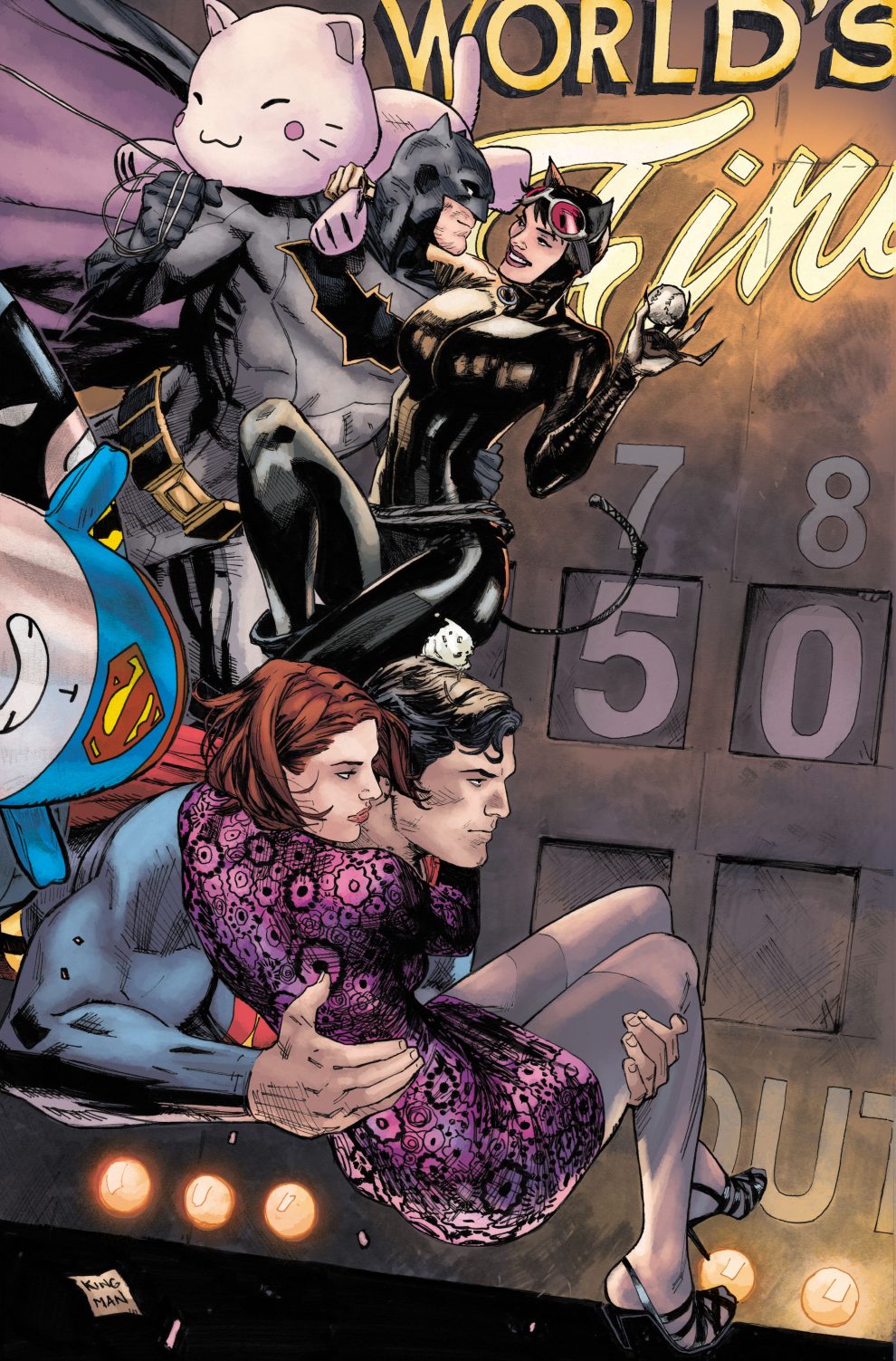 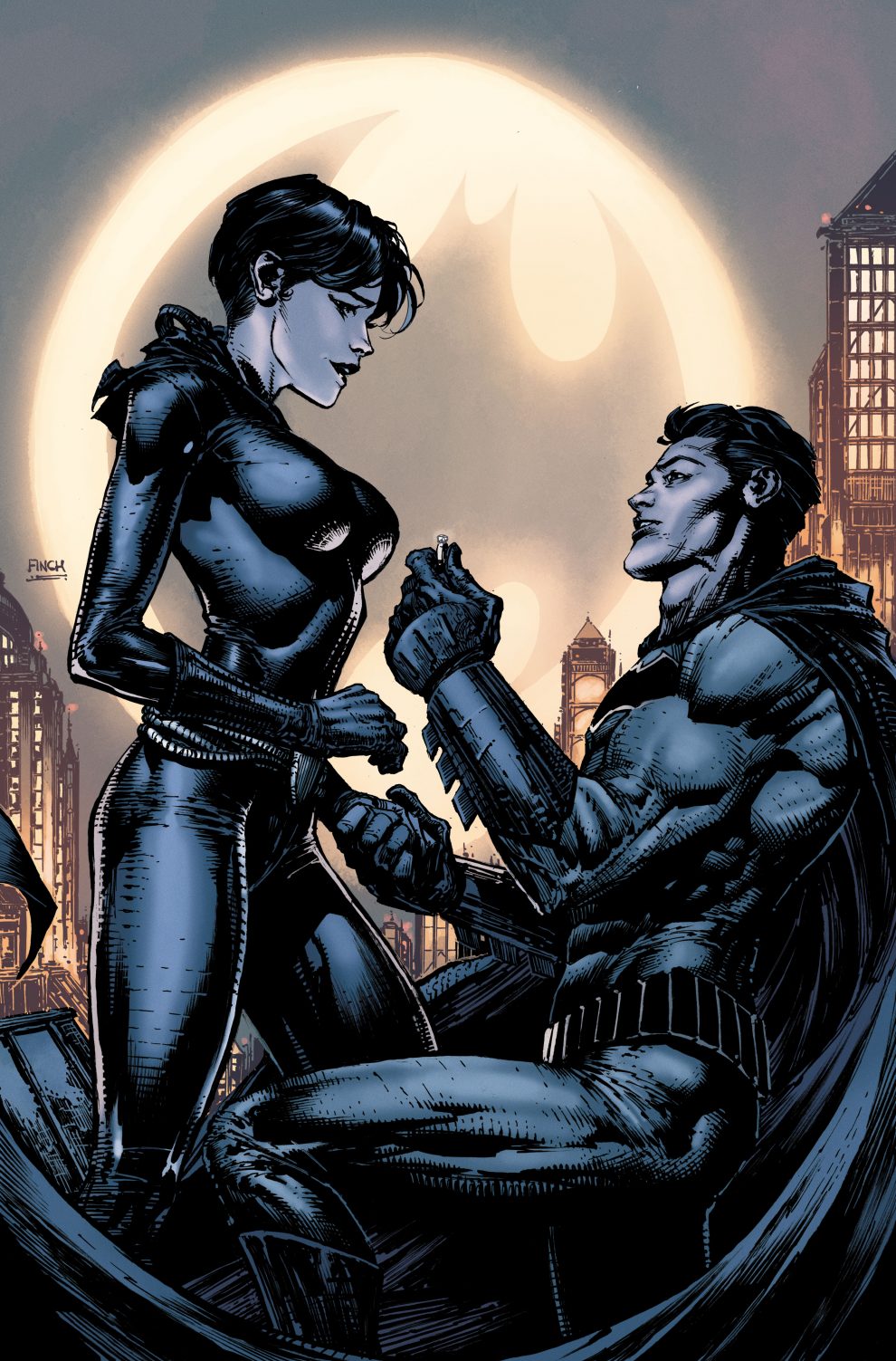 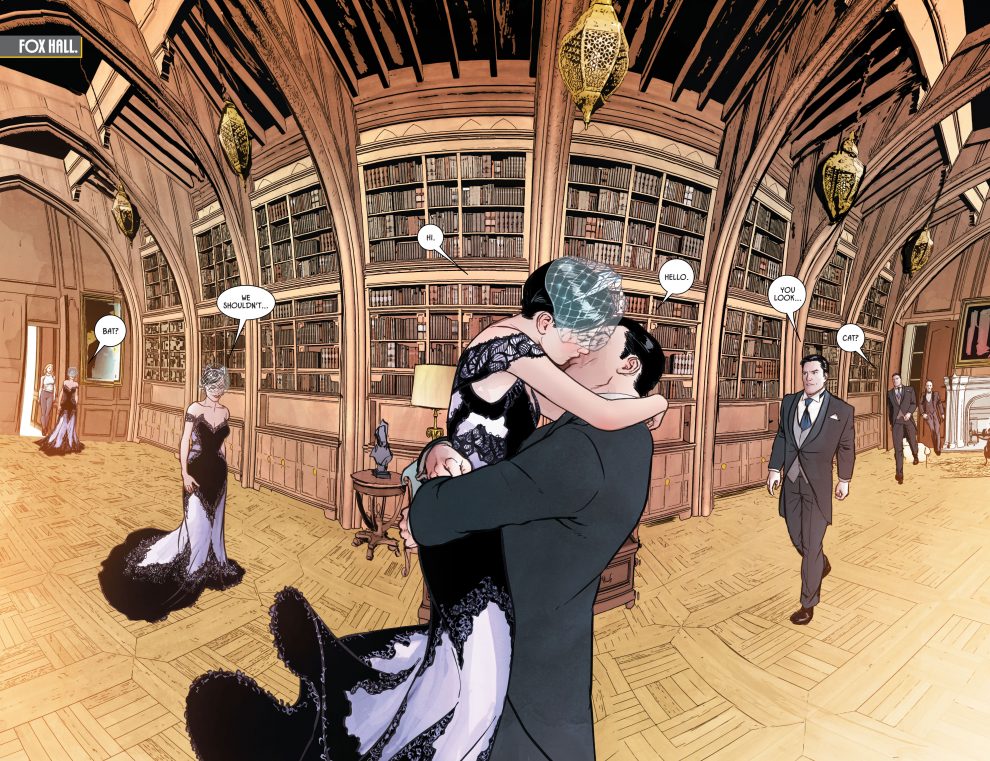 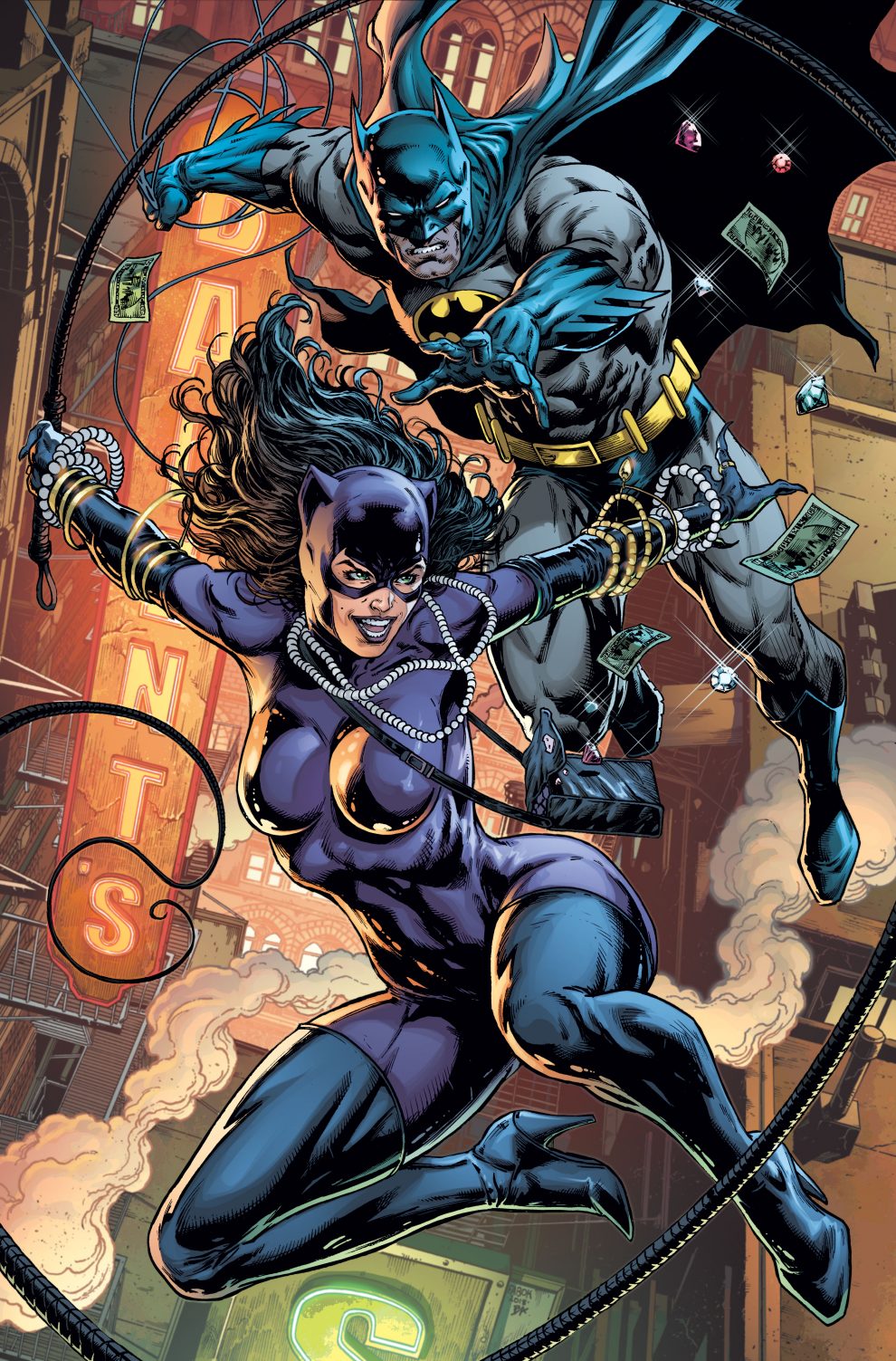 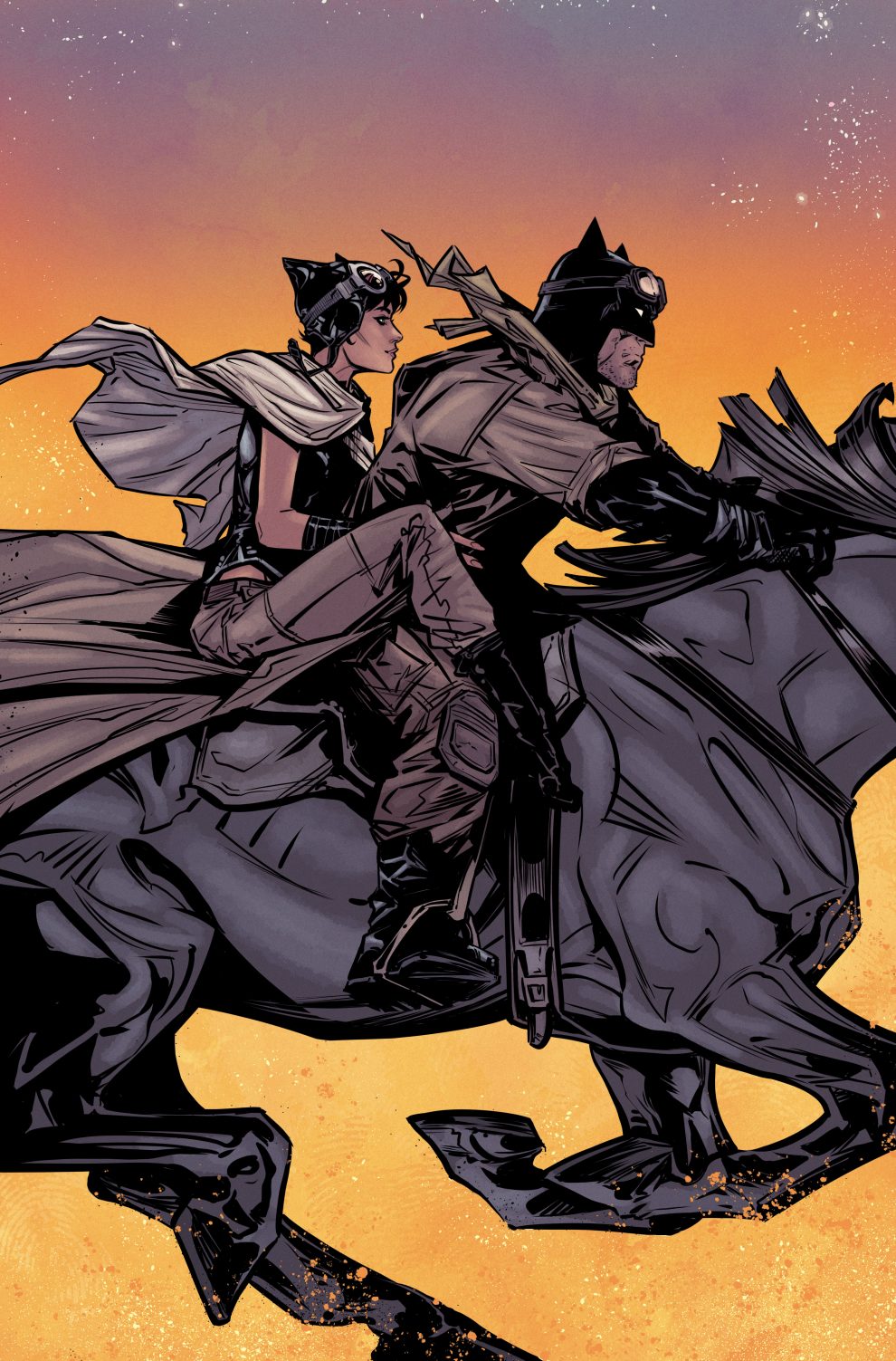 What makes the issue really great is the small scenes. Holly Robinson making a reappearance as Selina’s witness, or the moment where Alfred’s reactions hit the right emotional register. But perhaps the best part of the comic is the surprise twist ending. Yes, there is a surprise ending beyond just the nuptials. It is clever and recontextualizes every event leading up to this issue now. More importantly, it leaves you anticipating the next issue.

Not to say this comic is perfect. Like the Bat-Cat relationship, it is great, but also has flaws. Lets address the spoiler ending, which I will not divulge here. It is controversial to say the least. It is difficult to see if the characters – and DC Comics for that matter – made the right calls. Some readers will disagree, while others will think it is logical. However, it helps that King has a bigger story arc in mind and this issue is yet another piece of the narrative puzzle.

Something that is more intriguing is King’s use of parallelism. In the issue King’s favorite narrative device is taken to a ridiculous new level. Every other page almost feels like a retelling in the dialogue and/or reuse of the panel composition from previous instalments. It sometimes works brilliantly. The double splash page in the middle of the issue is an artistic achievement that evokes issues of Watchmen. Sometimes though, the parallelism feels repetitive or unnatural.

My main gripe with this issue is Batman’s characterization. King seems to always show Batman as this super-aloof, almost obtuse guy who is incapable of expressing any emotion. Normally, this is played up as a silent, stoic hero approach, but it seems out of place in a romantic wedding issue. It is particularly noticeable in the casual – almost flippant – way  that he addresses Alfred. When Bruce is talking about something important, he is also doing something else, like playing on his phone or eating. It’s odd.

There is some great material in this issue. Amazing art, nice emotional beats, and an awesome twist ending. It’s not a perfect wedding comic, but it is pretty darned good. Despite the spoilers leaking, some off characterizations, and redundant narratives, it would be a shame to not read the build-up to the end. Check it out and form your own opinions about the resolution.