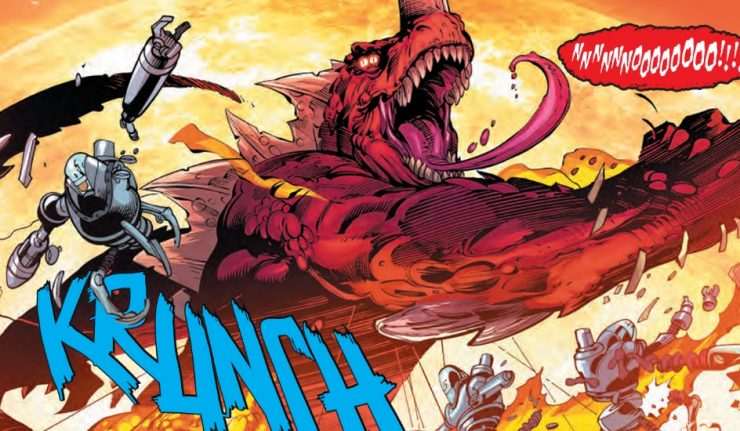 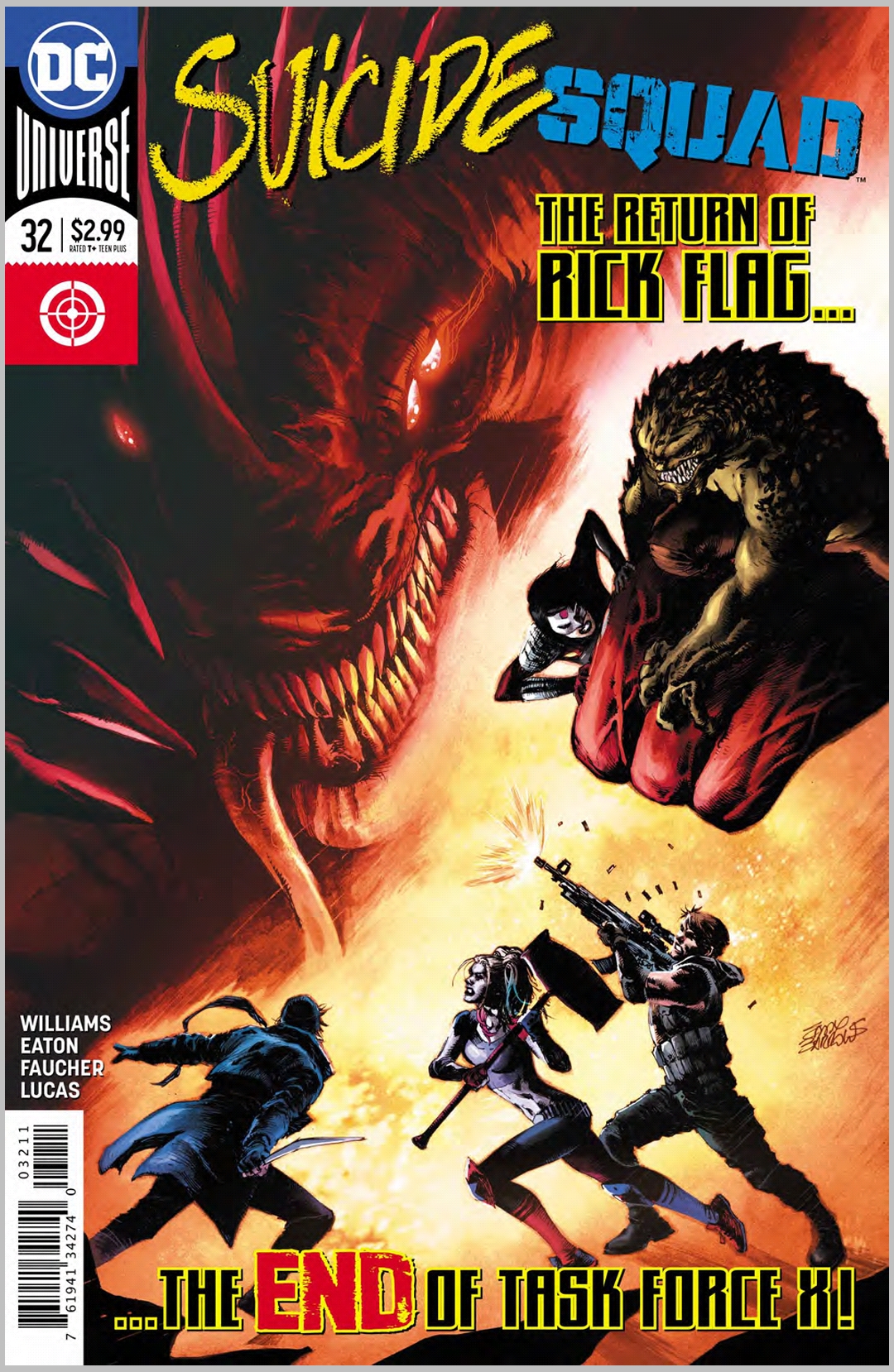 This issue marks the end, not only for this action packed story arc, but for relationships within the current team, and for the original Suicide Squad. Chapter six of “The Secret History Of Task Force X” is momentous indeed.

I’ve never made it a secret how much I admire the way Rob Williams handles the veritable army of characters in this book. The way he keeps their personalities consistent, their motivation clear and their identities distinct, and cohesive.

A few issues back I felt real joy at Harley finding love with Rick Flag… then Rob went and “Killed him”. Last issue Flag was found in the Phantom Zone, but Harley felt unworthy of him. This issue we reach a resolution that suits both characters, even if it doesn’t match readers expectations.

The blossoming and utterly endearing romance between Killer Croc and Enchantress also reaches a milestone, and it’s another hum-dinger… believe me.

On the subject of color, Adriano Lucas has delivered another cosmic feast for the eyes. His palette has always been impressive and never moreso than on this action packed story. When matched with great art Adriano always delivers, and the art in this issue is some of the finest that’s ever graced this title. 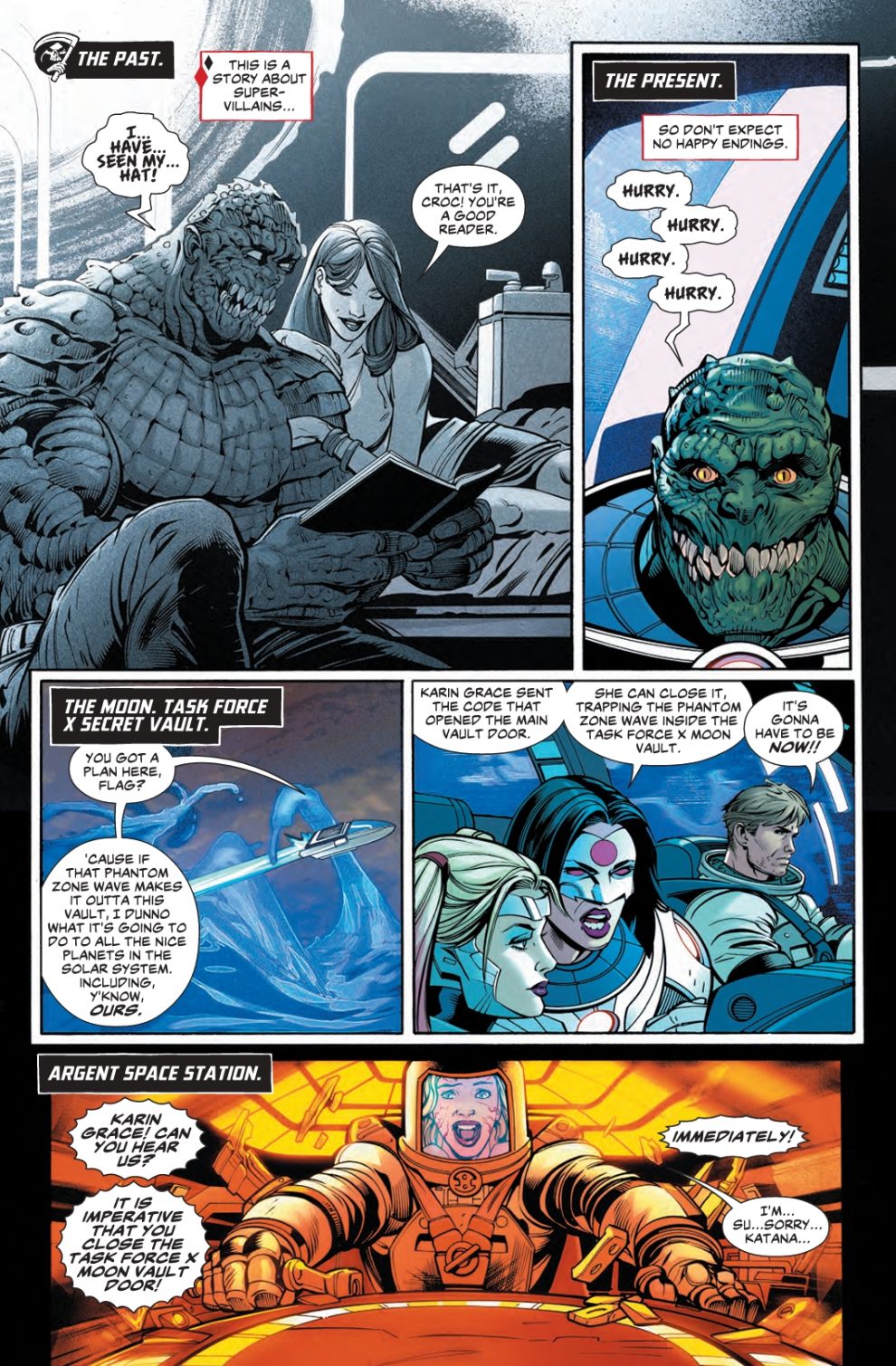 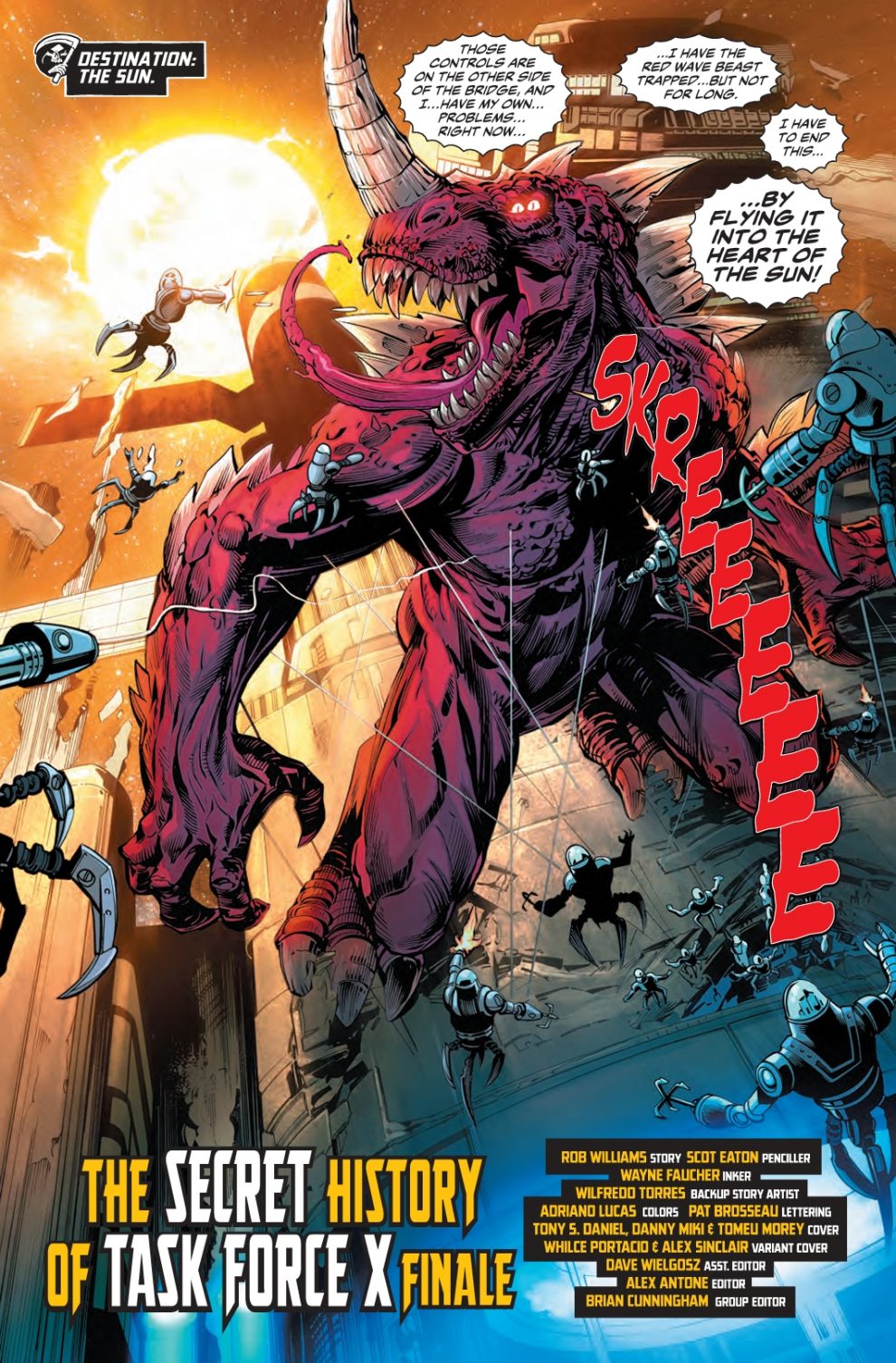 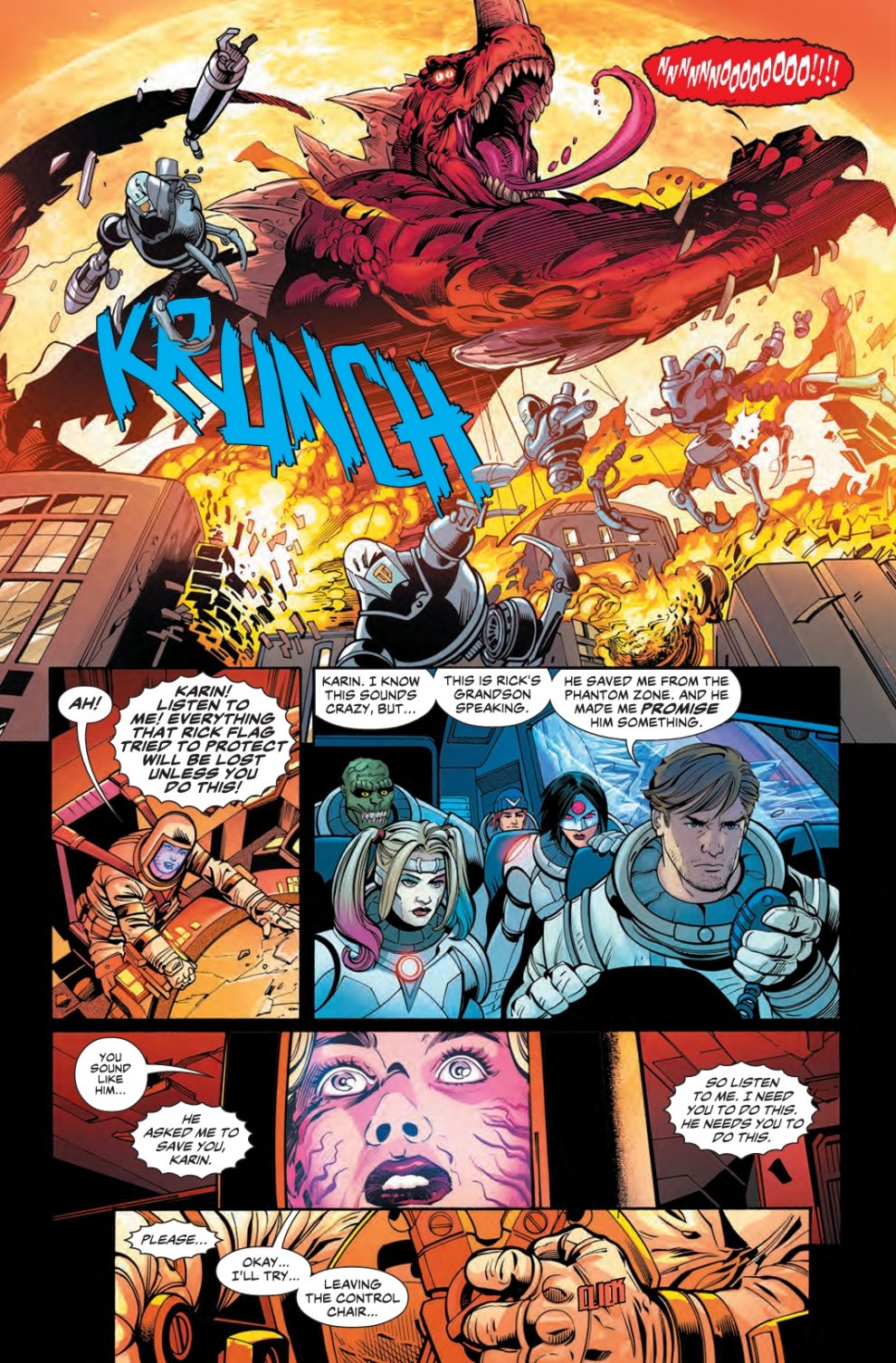 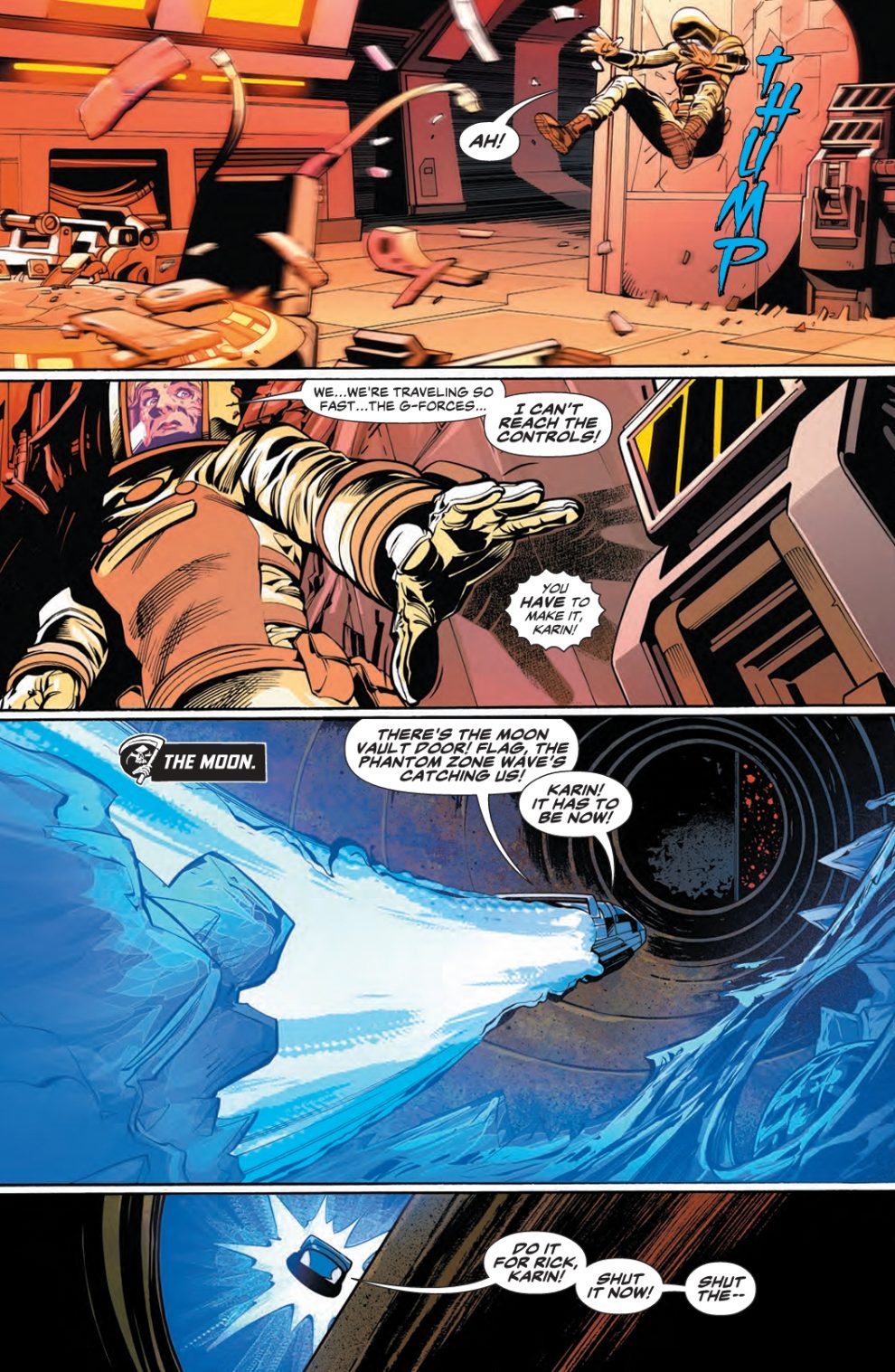 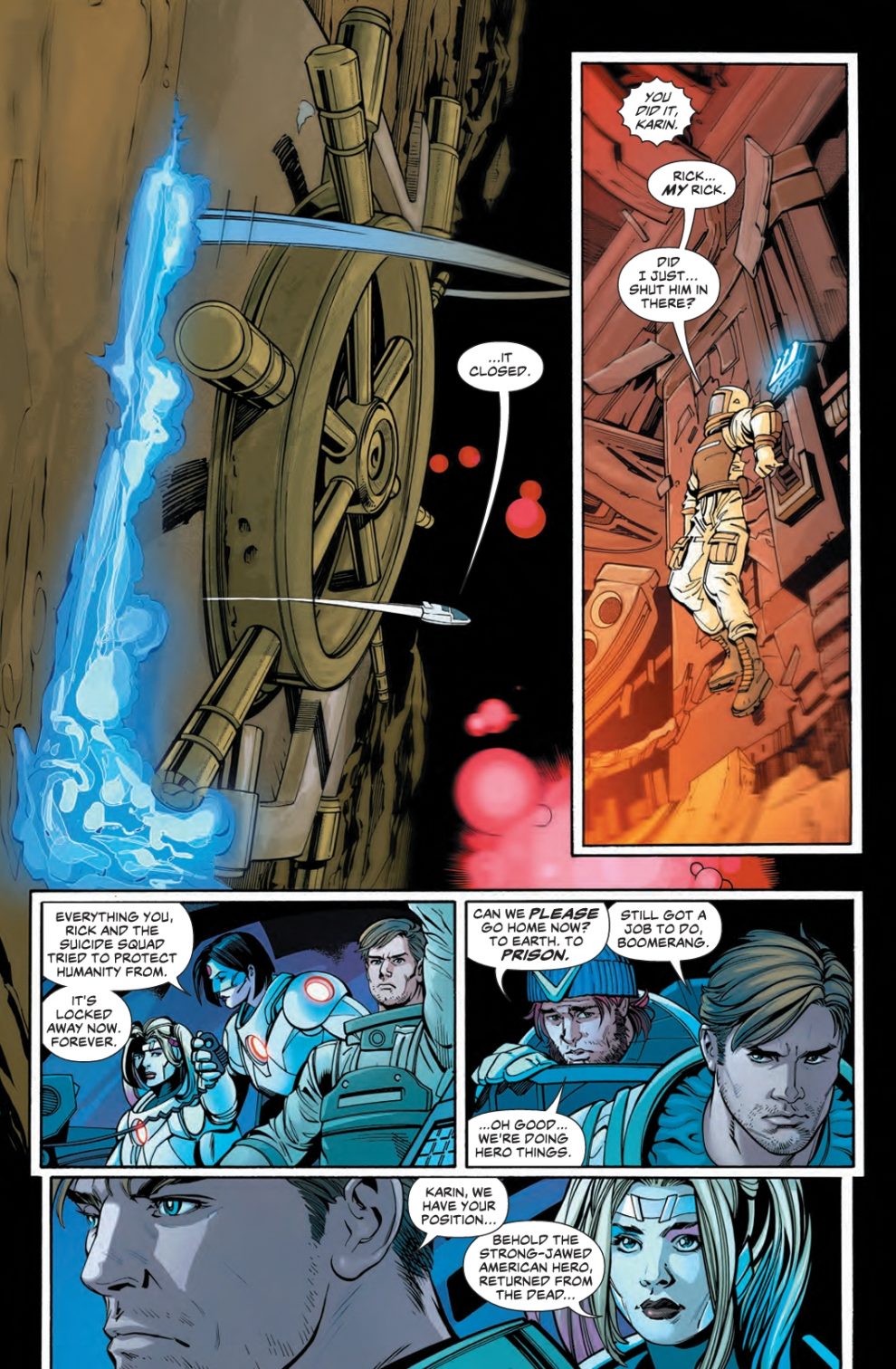 Rob Williams has been posting teasers for Scot Eaton’s art on this issue for a few weeks on social media. Readers who may not be familiar with Mr. Eaton’s work with DC Comic’s Marvel-ous competition are in for a treat. His layouts, action and craftsmanship are second to none. I’ve been a fan of his work for years, and his art on the final chapter of “The Secret History Of Task Force X” is a feast for the eyes.

As always Rob Williams may have closed the door on this chapter, but he has deftly sown seeds with real potential for explosive growth in the future. There are resolutions, revolutions and repercussions aplenty in this issue, but as one door closes…

One of my favorite parts of this storyline has been the great little back-up strip chronicling the adventures of King Faraday. The way this story has enhanced, and tied in with the feature story has been expertly handled. The art of Wilfredo Torres has helped differentiate it from the main ongoing narrative, and given it its own, fresh identity. I’m going to miss it, as it was like getting a yummy little dessert at the end of a rich main course.

The addition of Scot Eaton’s terrific art in this issue has been a very welcome one. This series has always been blessed with terrific writing, but the art accompanying it has varied wildly in quality. I have to say that the marriage of words and pictures in this issue is a very happy one. I’ve thoroughly enjoyed “The Secret History Of Task Force X”, and the final chapter has earned itself a well deserved: