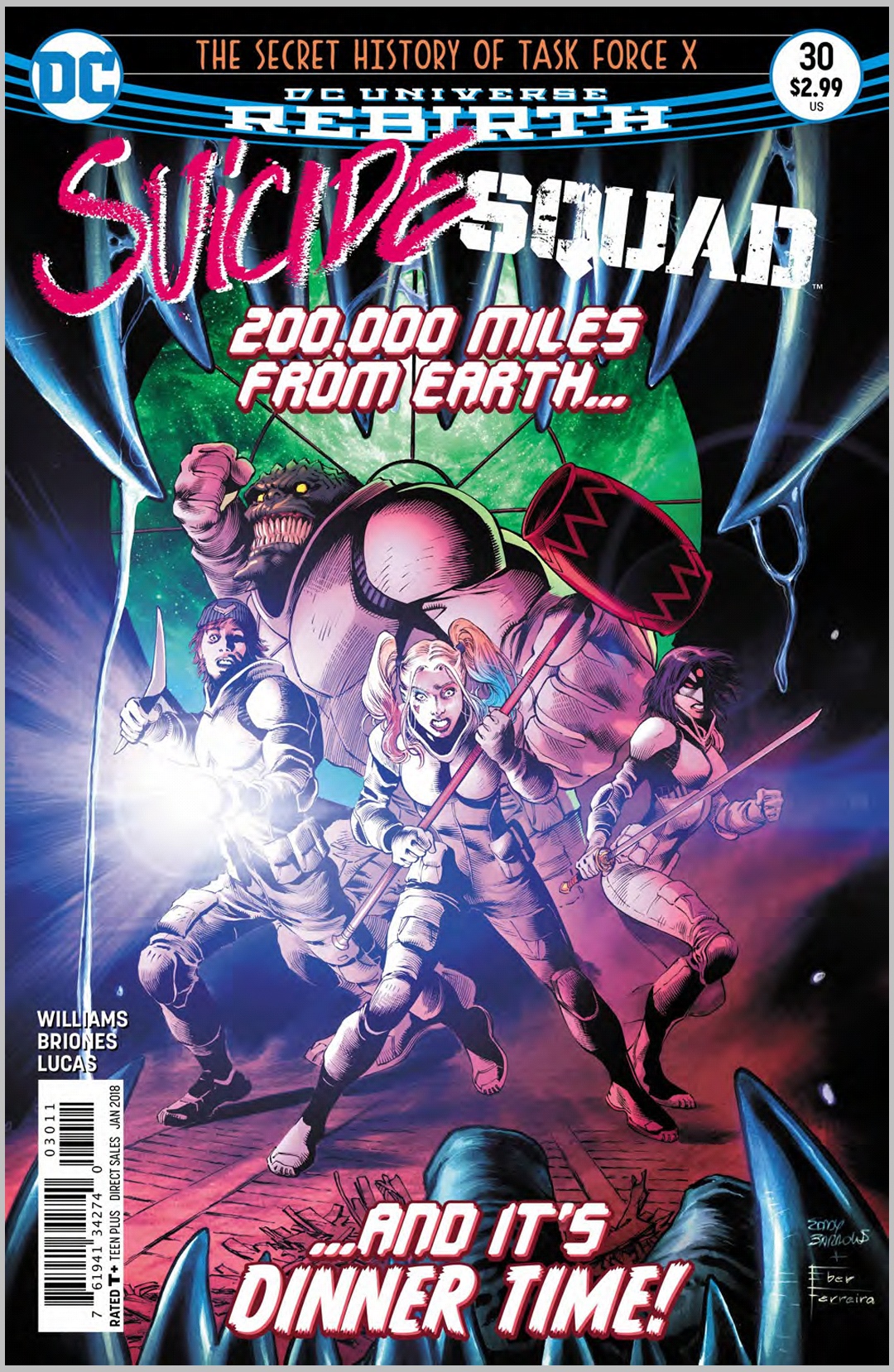 Sci-fi, super-heroics, giant monsters and demonic possession… welcome to a day in the life of the Suicide Squad! Chapter four of “The Secret History Of Task Force X” is one deep filled sandwich!

The action really does not let up this issue. The Red Wave has been pulling the strings of both Rick Flag Sr. and the original Task Force for decades, in an attempt to escape his lunar prison. As if the team didn’t have enough to contend with fighting reanimated corpses and killer robots, now there’s an ancient psychic dinosaur to deal with too! As a reader I call this fun, the Squad calls it Thursday.

This series has always delivered pulse pounding thrills, but thanks to writer Rob Williams, has never skimped on character. With a few well written lines, Rob delivers some great moments for Harley, Croc and Captain Boomerang in particular. 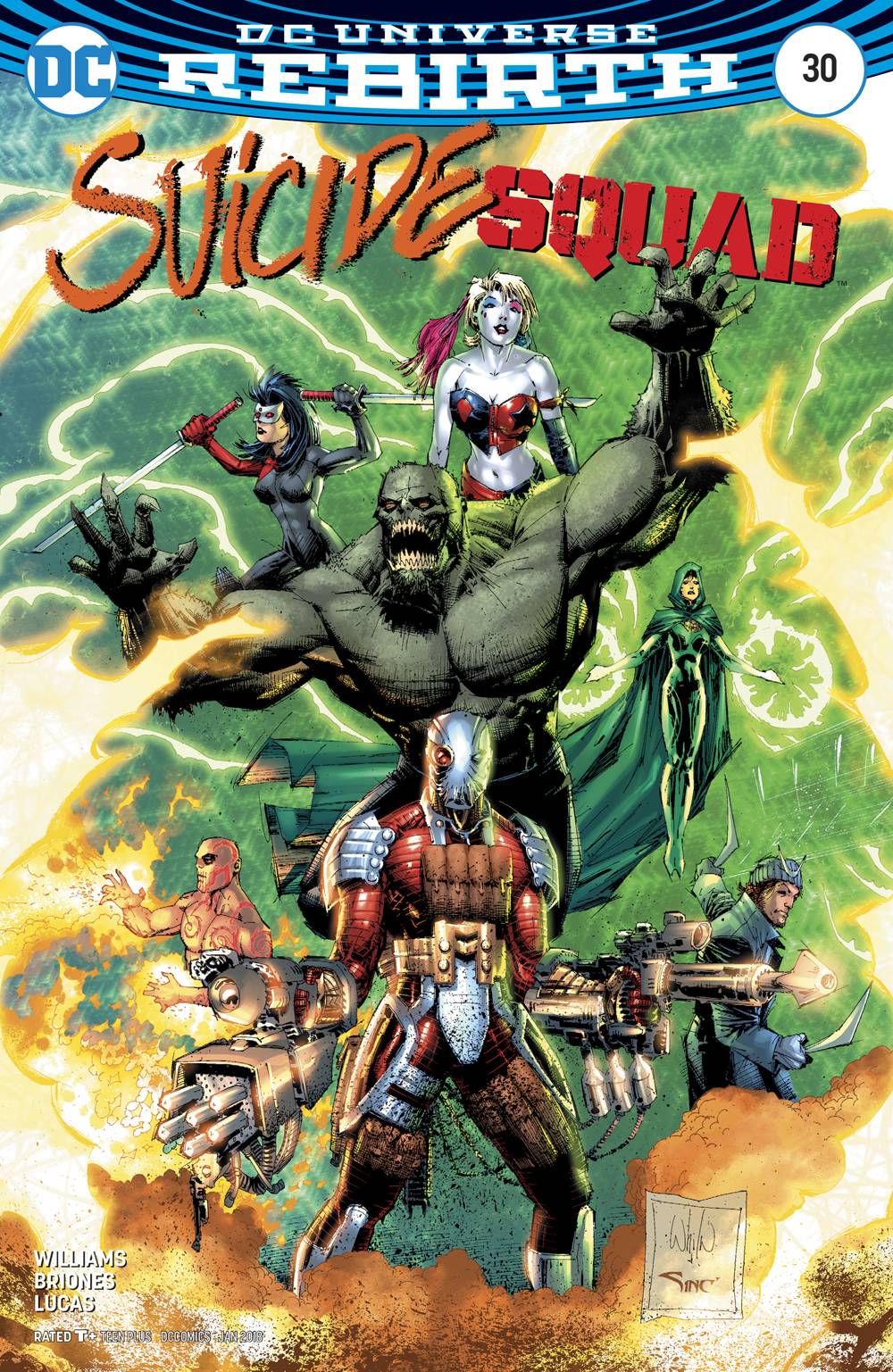 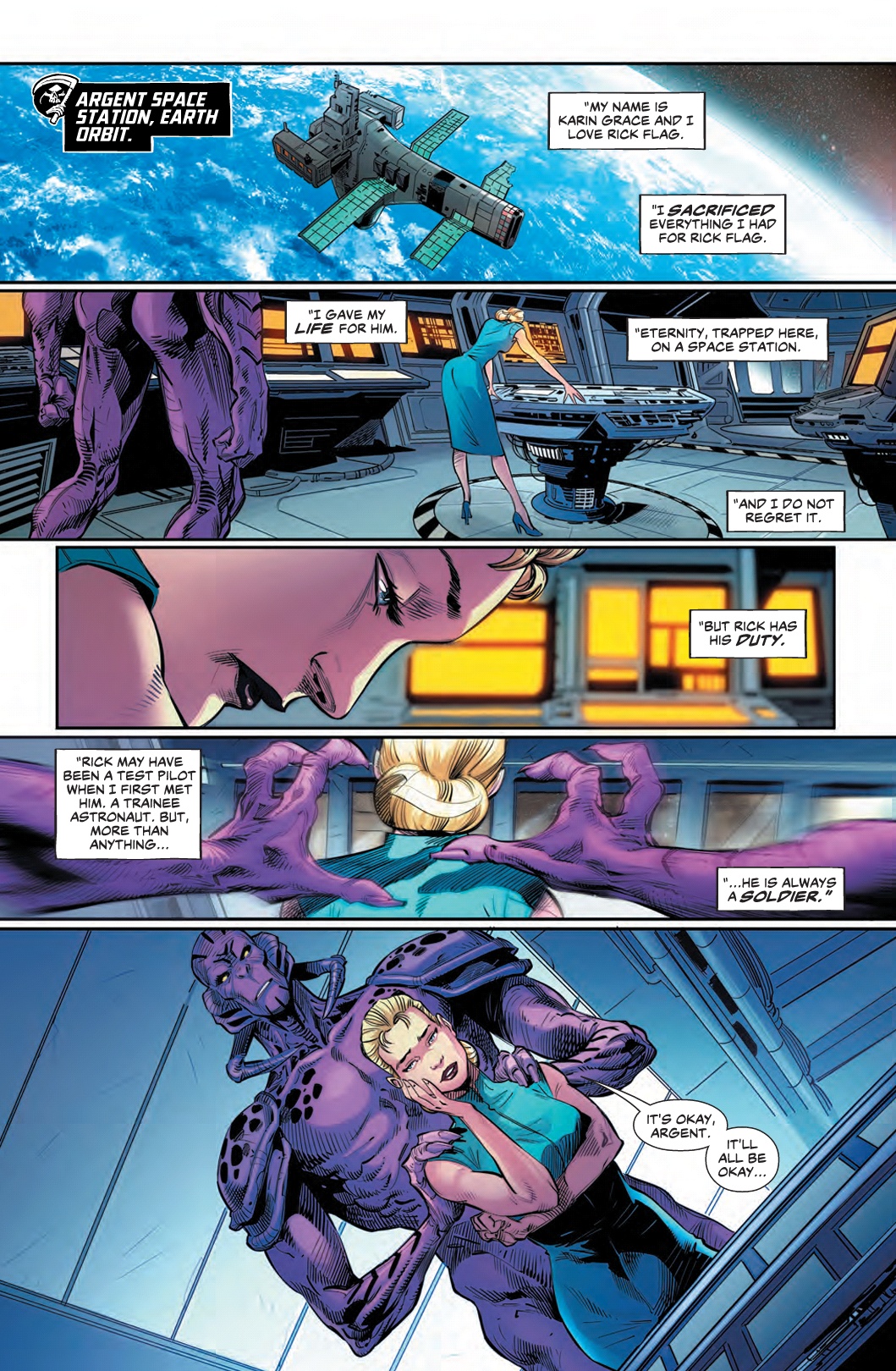 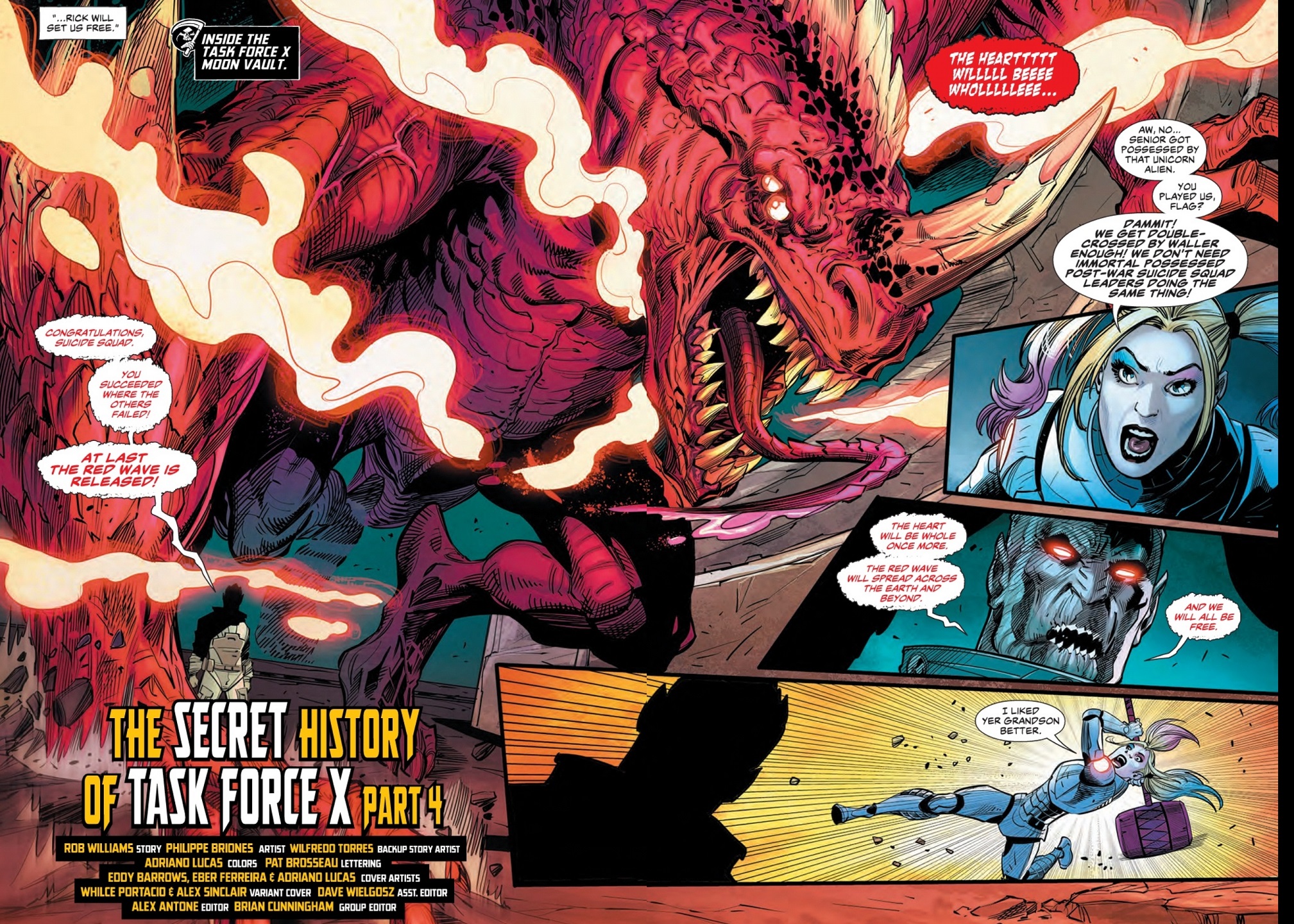 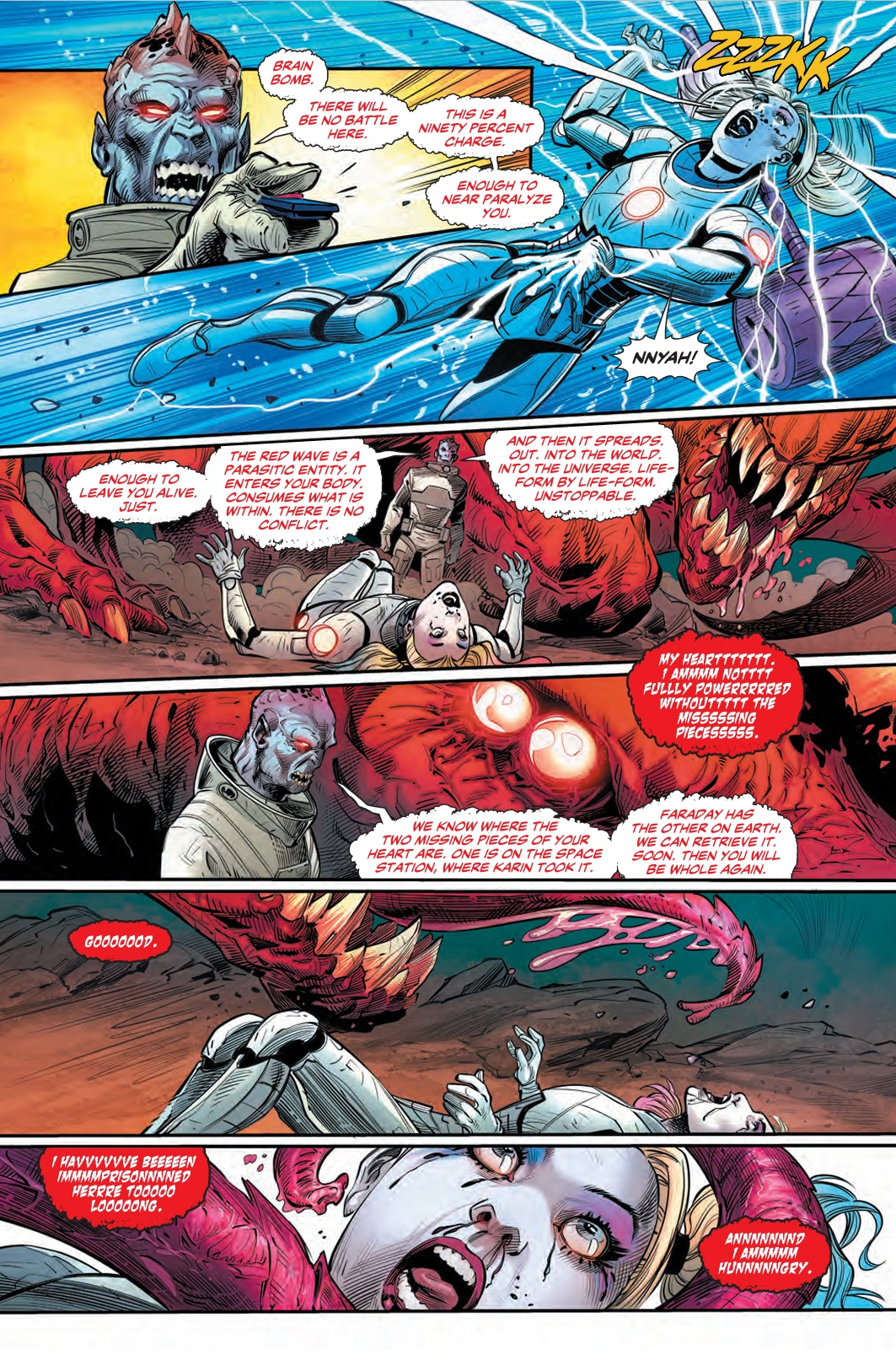 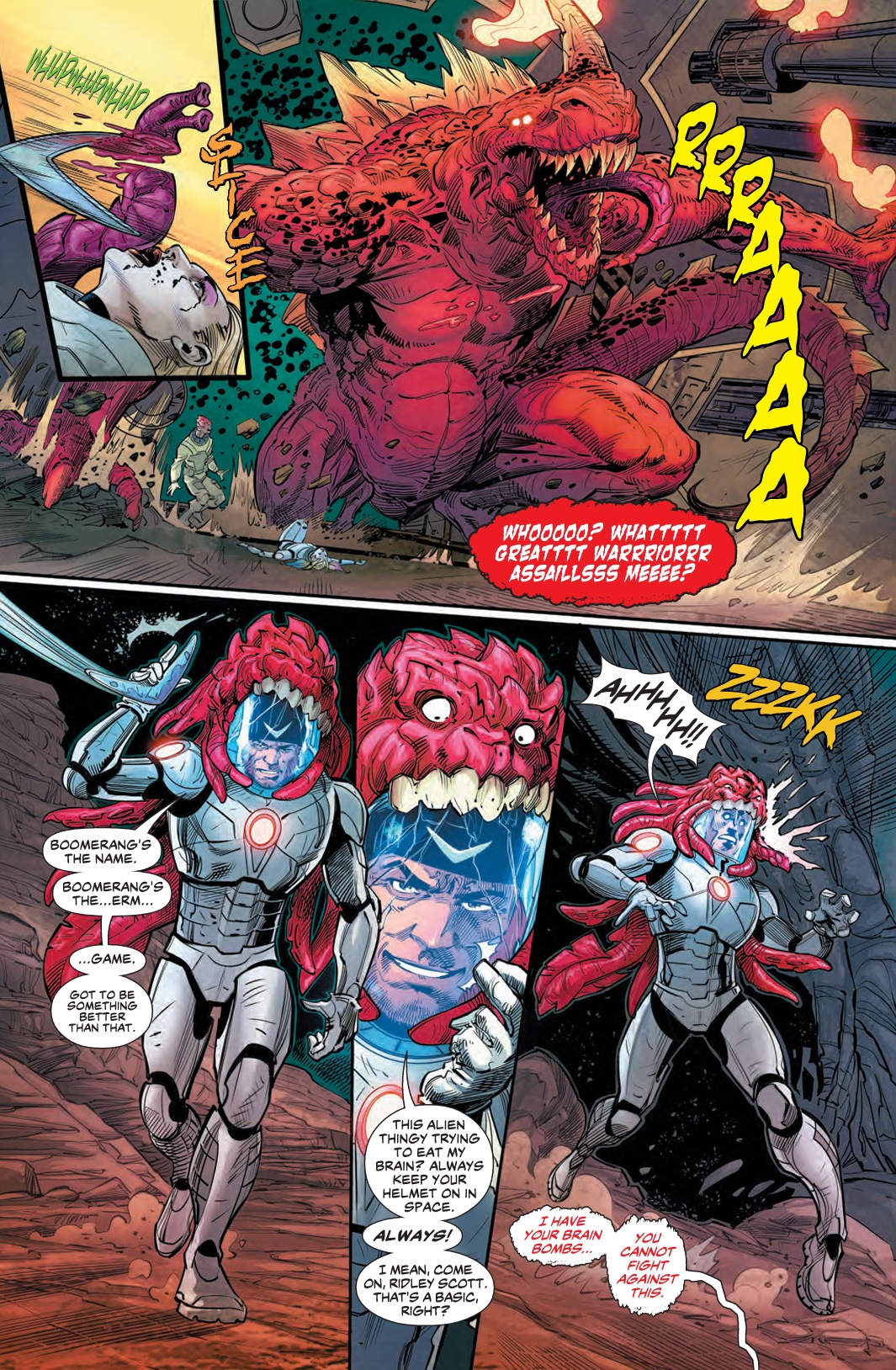 I truly admire the way that this title consistently delivers high octane thrills, horror, science fiction and real heart in equal measure. While I have sometimes bemoaned the fact that the writing often overshadows the art, this issue is most definitely an exception. This series has had a history of being a little uneven, but Philippe Briones has drawn a great, great comic! Philippe has delivered brilliant, fluid storytelling, and nice character moments too. We have monsters, villains, zombies, and heart… lots of hearts, actually.

Wilfredo Torres continues to deliver on the art chores in the back up strip too. This may only be a two page story, but it delivers some great background to the main arc. Veteran color artist Adriano Lucas gives the ultimate polish to both artists’ work. From space helmets, to cosmic lighting, Mr. Lucas’ hues enhance some already terrific visuals.

Rob ‘King Of The Cliffhanger’ Williams has written another sterling issue. I do not envy him, as he’s written a few titles as well as Suicide Squad in recent months. The way he writes life, death, emotion and action is enviable. When married with great art, this title is a real winner. I’ve always liked Rob’s writing, now I really want to see more of Philippe Briones’ work too.