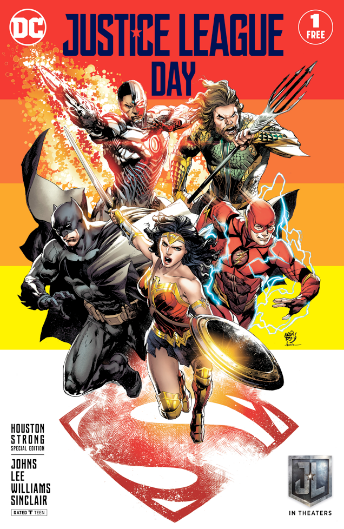 As part of the celebrations, a free reprint of the 2011 Justice League #1 will be made available at participating stores. it will feature a brand new cover by Ivan Reis and Joe Prado and will also be made available on Local Comic Shop Day.

One special event that will be taking place is the #HoustonStrong variant cover that will be available. Fourteen local comic stores in the Houston area affected by Hurricane Harvey will be offering this variant free.

On Saturday, co-publishers of DC Comics Dan DiDio and Jim Lee will be doing signings as well. Head over to the Bedrock City Comic stores where Lee and DiDio will be available in-store at the following times:

As well as local stores, you can get in on the action on-line  DC are also offering deals over at their website including special gifts, discounts and exclusive gear to celebrate the release of the movie as well

Check with your own local comic store to see if they have any plans for Justice League Day this Saturday.