What is DC’s Dark Multiverse? It’s a question readers have been asking since its inception. At first, it seemed like a plot device to bring evil versions of Batman into the story. Even within the story, when Kendra flips the map of the Multiverse, it’s just black. However, knowing the work that Grant Morrison put into the current DC Multiverse, it’s hard to believe that Scott Snyder wouldn’t be doing something similar with the Dark Multiverse. 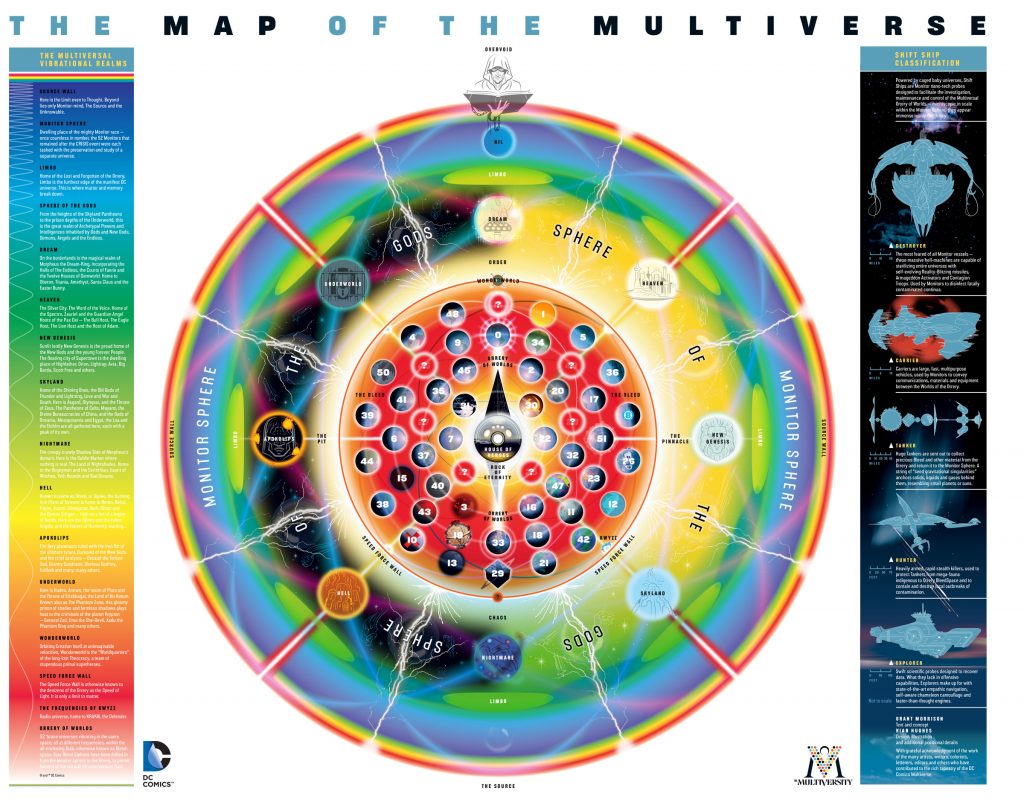 Bradley Hobart, a DKN reader, reminded me, in a comment to my Batman: The Red Death review, that there are seven unknown Earths on the MU map. There are seven Justice Leaguers, and there are also seven Dark Knights. Is this simply a coincidence? Or is there deeper meaning there? It’s hard to ignore that number seven.

My main pause to that theory is that Snyder has explained that while there are 52 known universes in the Multiverse; the Dark Multiverse is more fluid. At the time of my Batman: The Red Death review, the way Earth -52 was laid out in the comic made it appear to be Earth-52. I was of the mind that it was a negative symbol, which we’ve since confirmed with the additional one-shots.

Looking closely at the MU map, you can actually see numbers underneath the question marks of the unknown universe. So, while I don’t believe these Dark Earths we’ve seen are part of those seven missing; I do think seven plays a part. I’m just not sure what yet.

Kieran Shiach from CBR.com pieced together a working theory that, despite some holes, seems like it could be solid. With Batman: The Drowned, Shiach saw the connection between Earth -11, the home of Bryce Wayne—the gender flipped Bruce Wayne, and Earth-11. From DCComics.com:

“On Earth-11, the genders may have switched, but the nature of heroes hasn’t.  The Justice League still fights for good but the line-up includes a woman who doesn’t take being called Plastic as an insult.   And a group known as the Freedom Fighters, including Columbia, Black Condor, and the Phantom Man is never too far from fighting the good fight.”

The pages of Batman: The Drowned confirmed that Earth -11 is also a gender flipped world. Shiach began making other comparisons. Earth -44, while similar to Prime Earth at first, features Batman becoming a cybernetic being, while Earth 44 is centered around purely robotic versions of superheroes. Earth -32 and Earth 32 both deal with Bruce Wayne being granted a Green Lantern ring. Shiach admits to some flaws in his theory, primary that The Merciless comes from Earth -12. It’s counterpart, Earth-12, is that of Batman Beyond. There’s no direct connection to the God of War on Earth-12, though it is revealed at the end of Batman: The Merciless that Bruce is older; similar to his Earth-12 counterpart.

The biggest flaw in Shiach’s theory is the home of The Red Death, Earth -52. The main Multiverse has no counterpart to this mysterious world. The MU Earths are numbered 0-51—what is Earth -52? From what we’ve seen, it appears to be a darkened version of Earth-0. Earth -52 could be a big clue to what all this means. It’s a world where Bruce has lost everyone he cares about. A world where he’s willing to kill a fellow Justice Leaguer. A world where Batman has tapped into the Speed Force. Like Earth-0, yes… but aren’t ALL the MU (and Dark MU) Earth’s “like Earth-0, but…”? 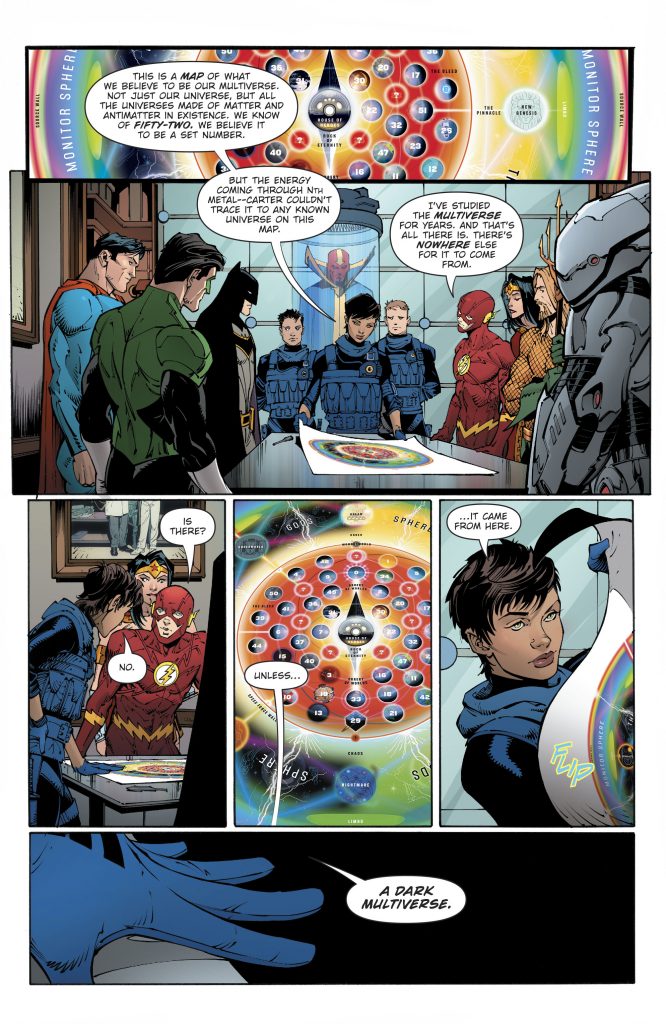 What if Kendra flipping the Multiverse map over is taken literally? 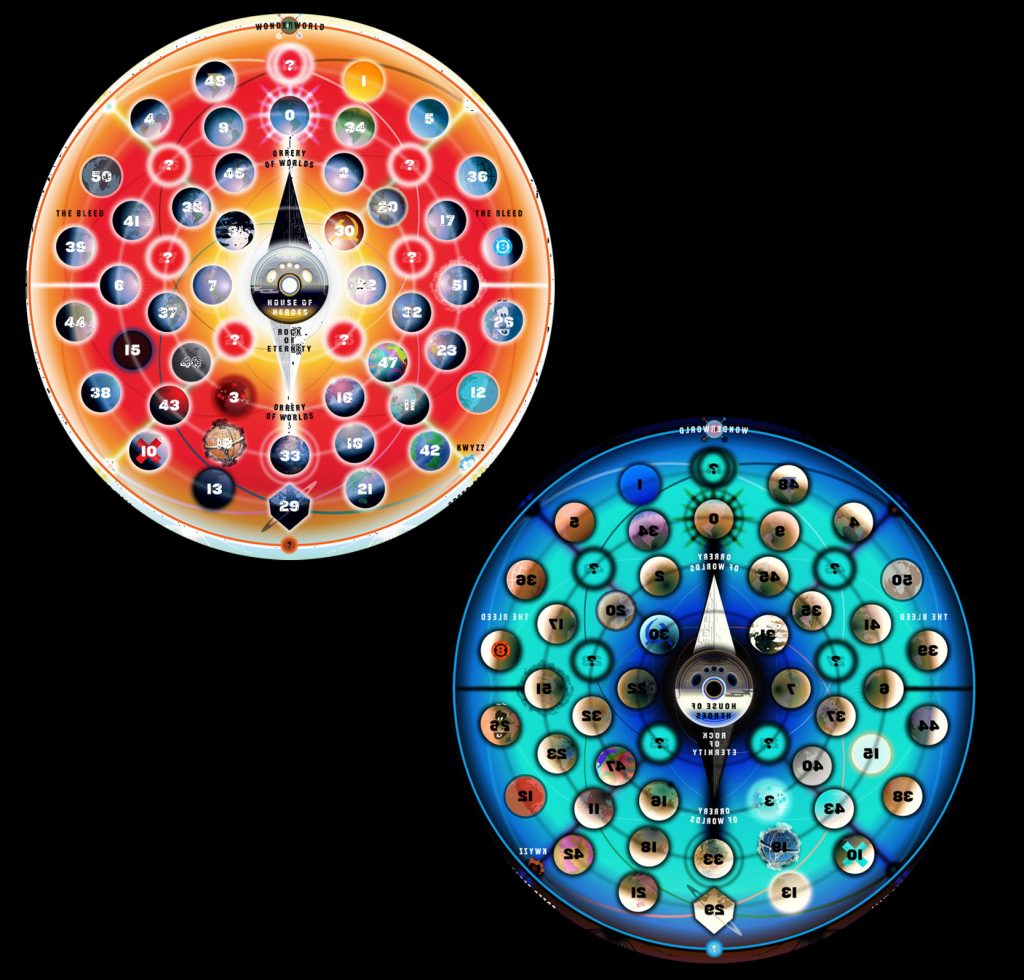 Perhaps the Dark Multiverse isn’t as fluid as Snyder leads us to believe. Maybe there is some order to the chaos? When flipping the map over, you can still create some of the parallels that Shiach has already made. Earth -11 still pairs up to Earth 11 and Earth -44 still pairs up to Earth 44. I run into similar flaws, where Earth -32 doesn’t pair up with Earth 23, nor does Earth -12/Earth 21. However, it could help explain Earth -52 being linked to Earth 25—an unknown universe. While Earth 21 and 23 are on the MU map, I couldn’t find much information on those world’s version of Batman or the other heroes. Nothing is known about Earth 25—perhaps it’s a world where Bruce Wayne is struck by lightning and granted powers by the Speed Force.

I believe Earth -52 holds a giant key to what the Dark Multiverse is and how it connects to everything else. The Red Death, whom comes from that Earth, is unique to the other evil Batmen—he has Barry Allen merged with him. In my review for Batman: The Red Death, I made a prediction that The Red Death would be a factor in saving the day and that has never felt righter than it does now.

The Dark Multiverse is starting to make connections to the known Multiverse of 52 Earths. There are still plenty of questions with plenty of story left to help answer them. No matter the answer, it’s safe to say that DC’s Metal event, and the Dark Multiverse, are going to change the DC landscape forever.