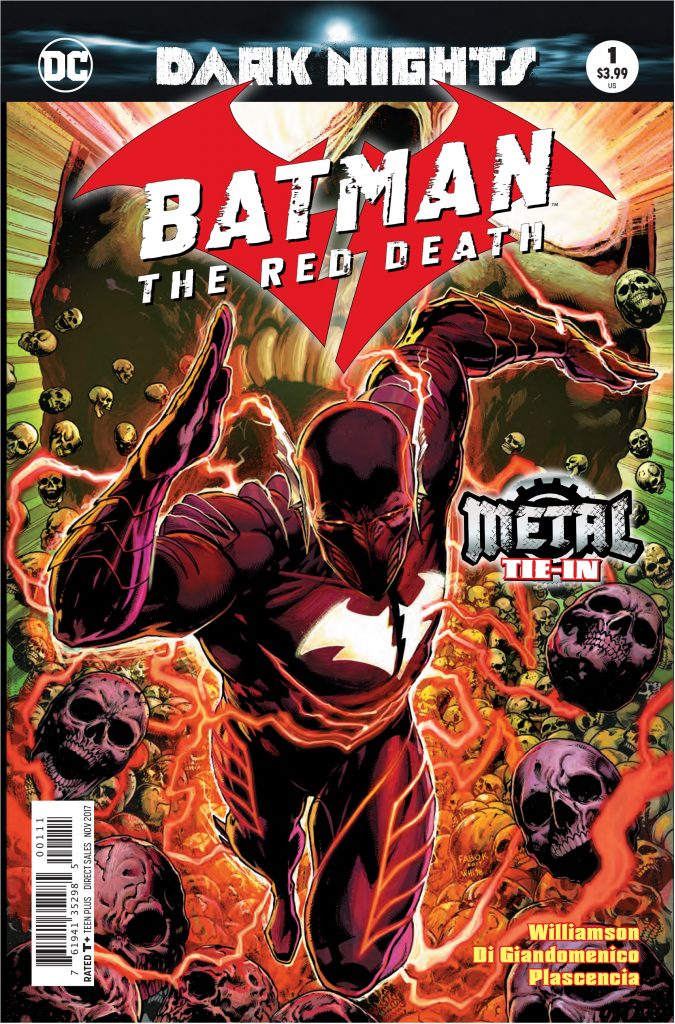 The Metal event introduced the Dark Multiverse and the evil Batmen, led by Barbatos. Even with two prologue issues, two issues in the main series, and tie-ins starting to publish, we know very little about this new multiverse and evil Batmen from within. Batman: The Red Death #1 offers our first glimpse into the “other side”.

The issue starts out with The Flash of Earth -52 trying to convince the person attacking him to help him save Central City instead. As it turns out, Batman has collected the weapons of The Flash’s rogue gallery and is attacking the scarlet speedster. While it’s always fun to see our favorite heroes duke it out every now and again, I’m not sold as to why Bruce is attacking Barry to steal his speed force. Yes, he gives his reasons—he lost everyone, including his son. I sympathize, but this is Batman. He’s supposed to be better than this.

The Batman of this Earth is just as tricky as most incarnations of Batman we’ve seen—he uses his friendship with The Flash to distract him. Once distracted, Batman injects him with the cryostasis formula that Victor Fries uses to keep his wife, Nora, alive. Although The Flash’s metabolism can burn it away, it gives The Dark Knight enough time to knock him out. This leads to some very gorgeous imagery from Carmine Di Giandomenico of Batman going full psycho. At this point, I’m still uneasy about how Bruce is handling things—I can’t imagine a world, and there’s a plethora to choose from, where a Bruce Wayne, whose parents were murdered and then dedicated his life to justice, would willingly destroy another person, let alone his friend. 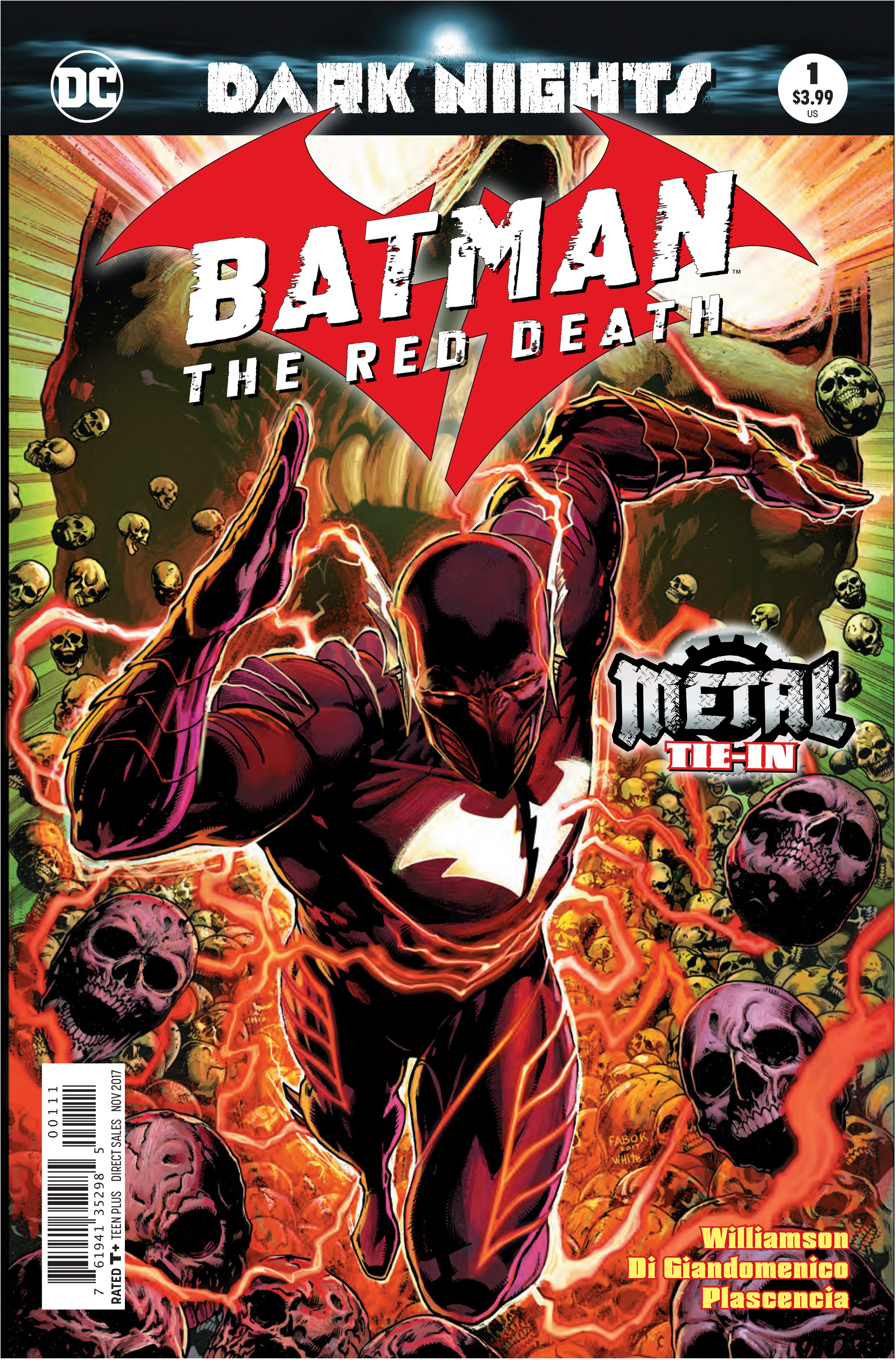 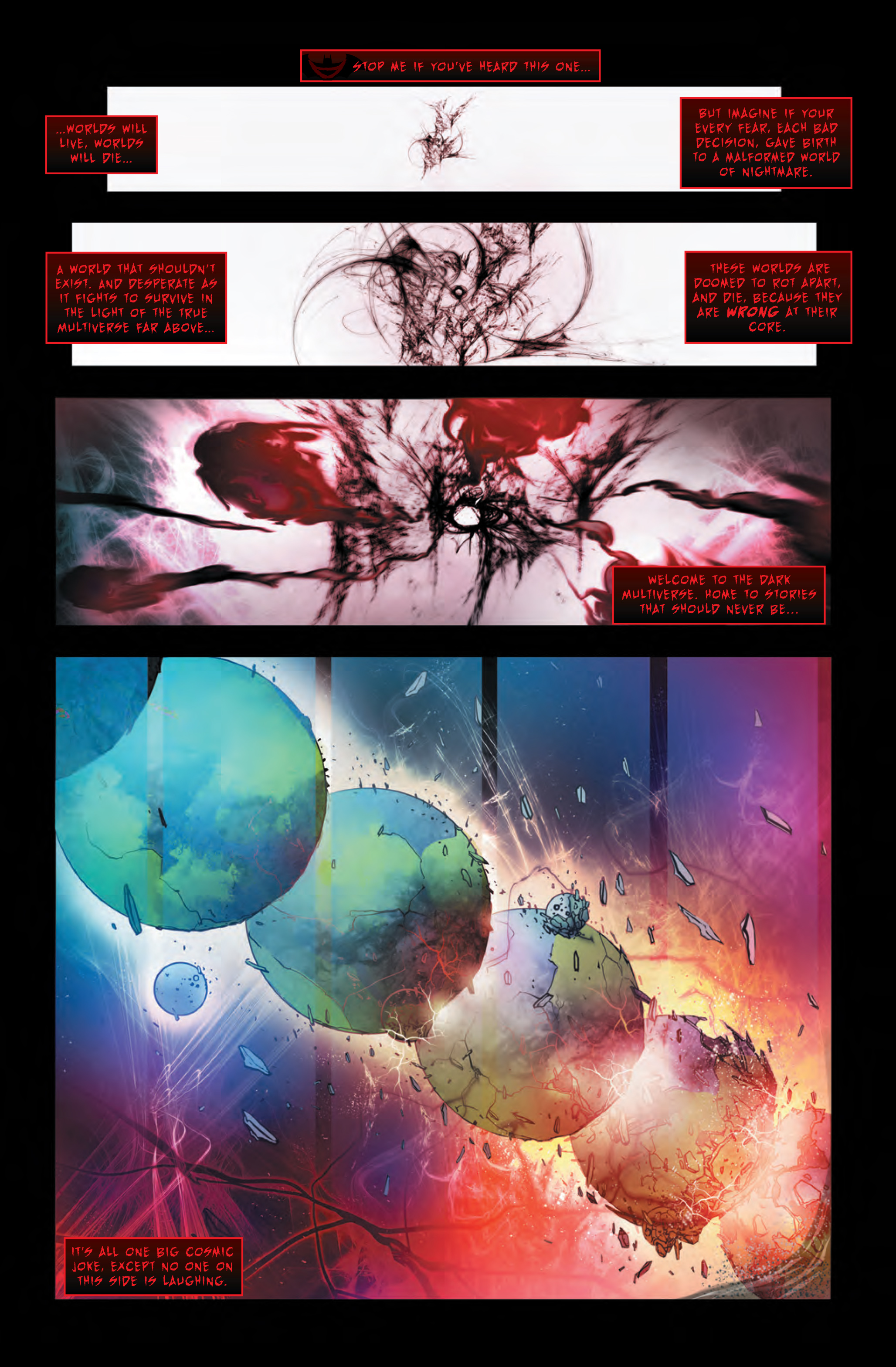 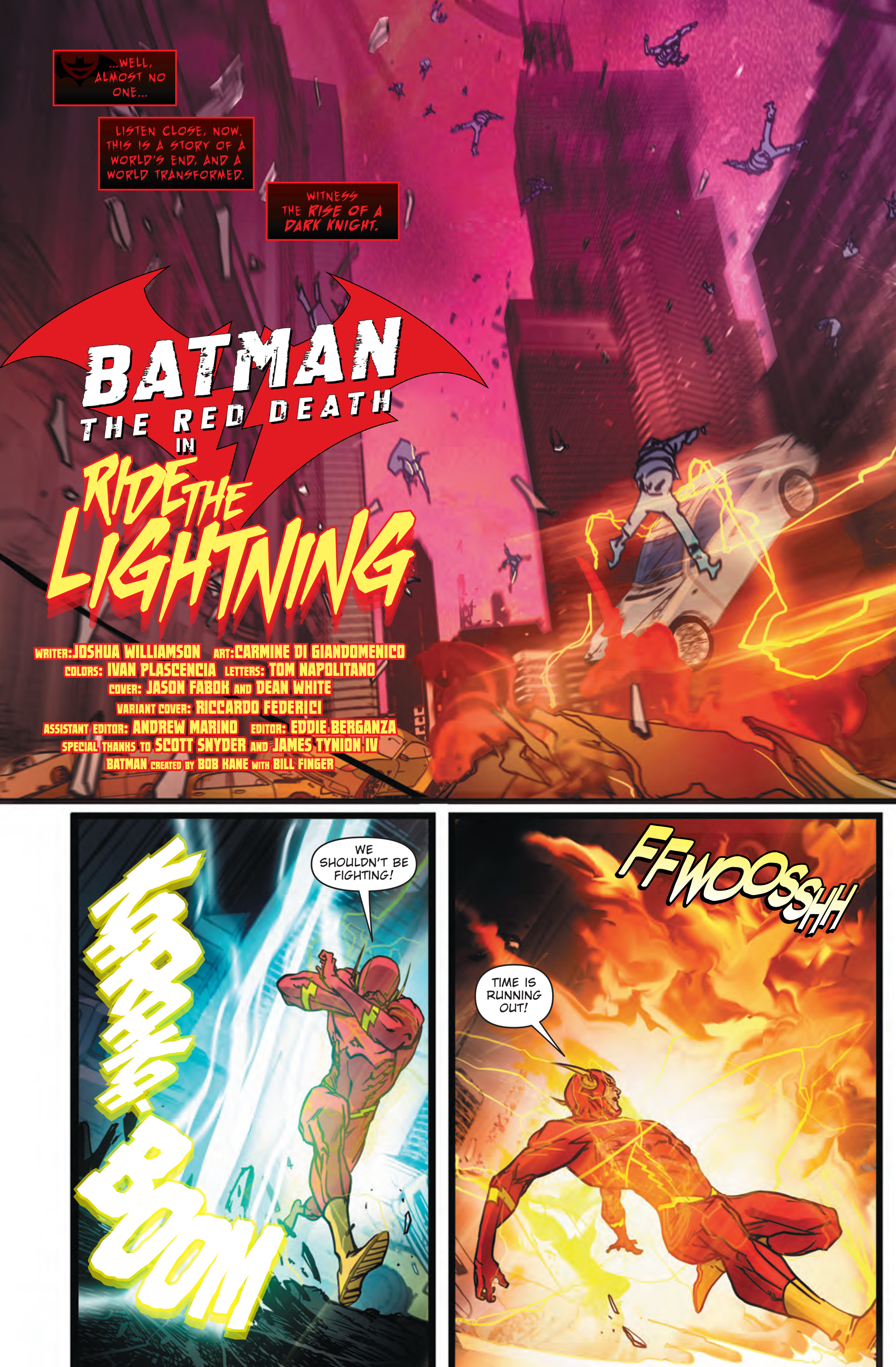 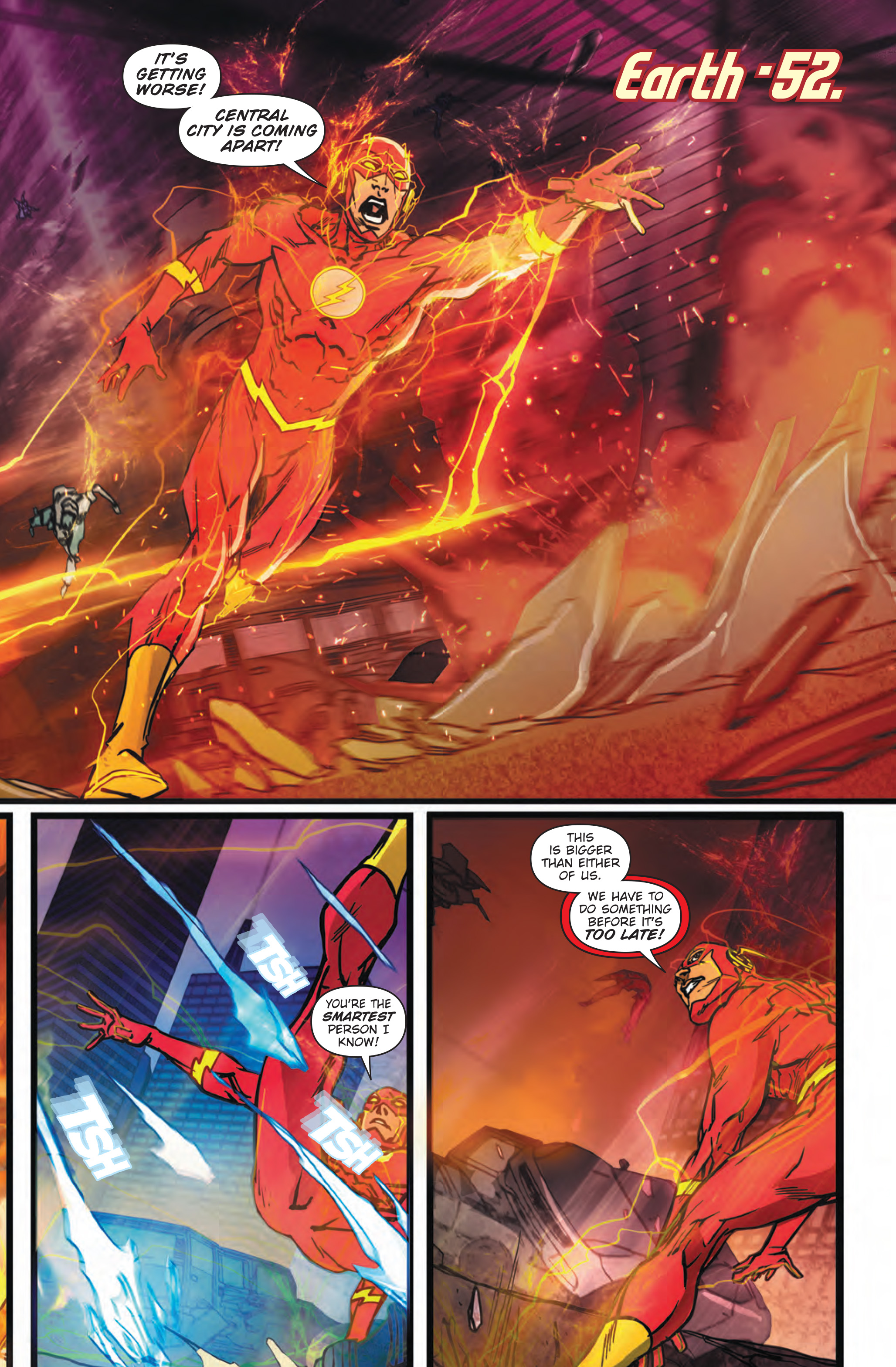 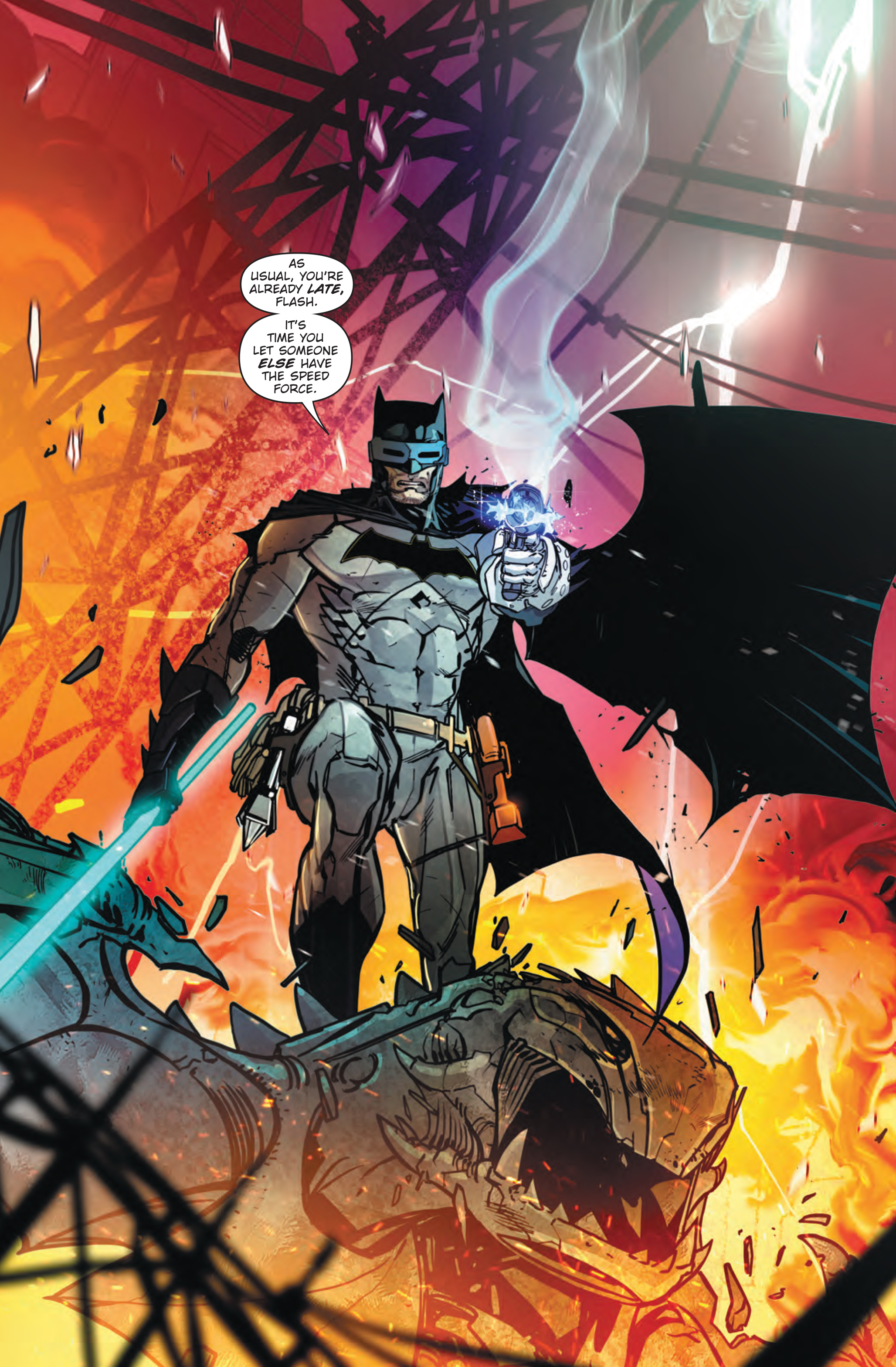 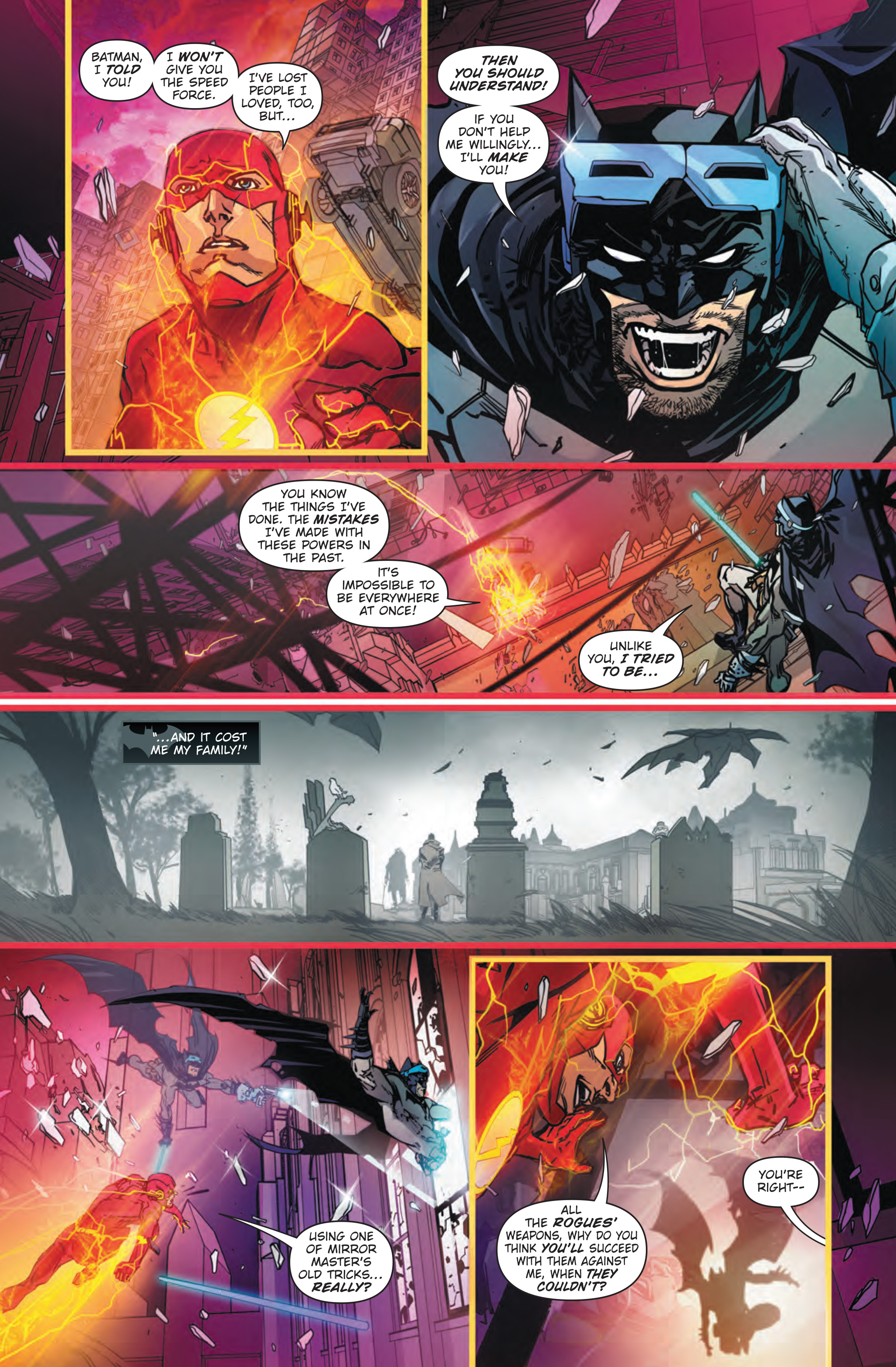 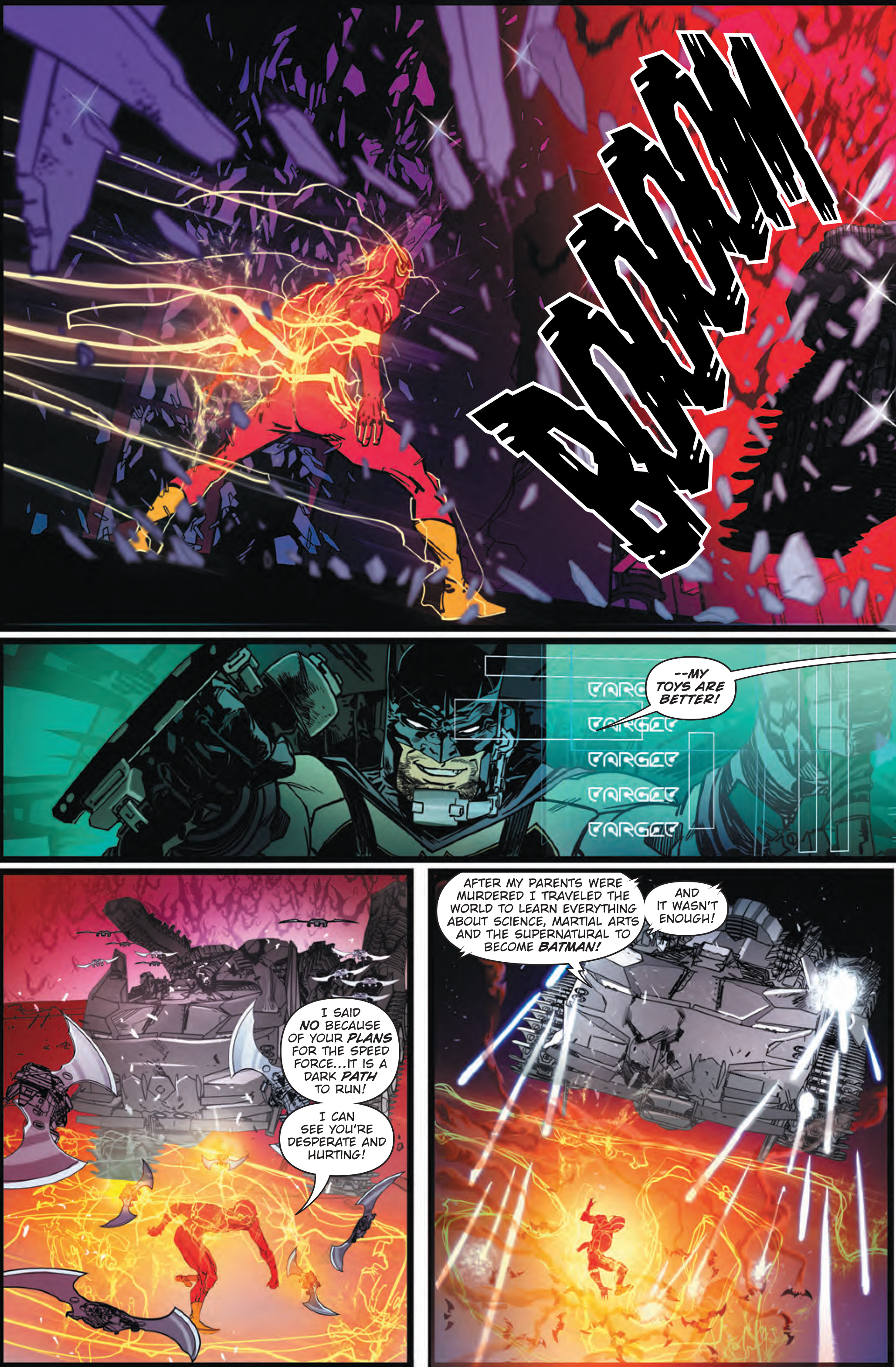 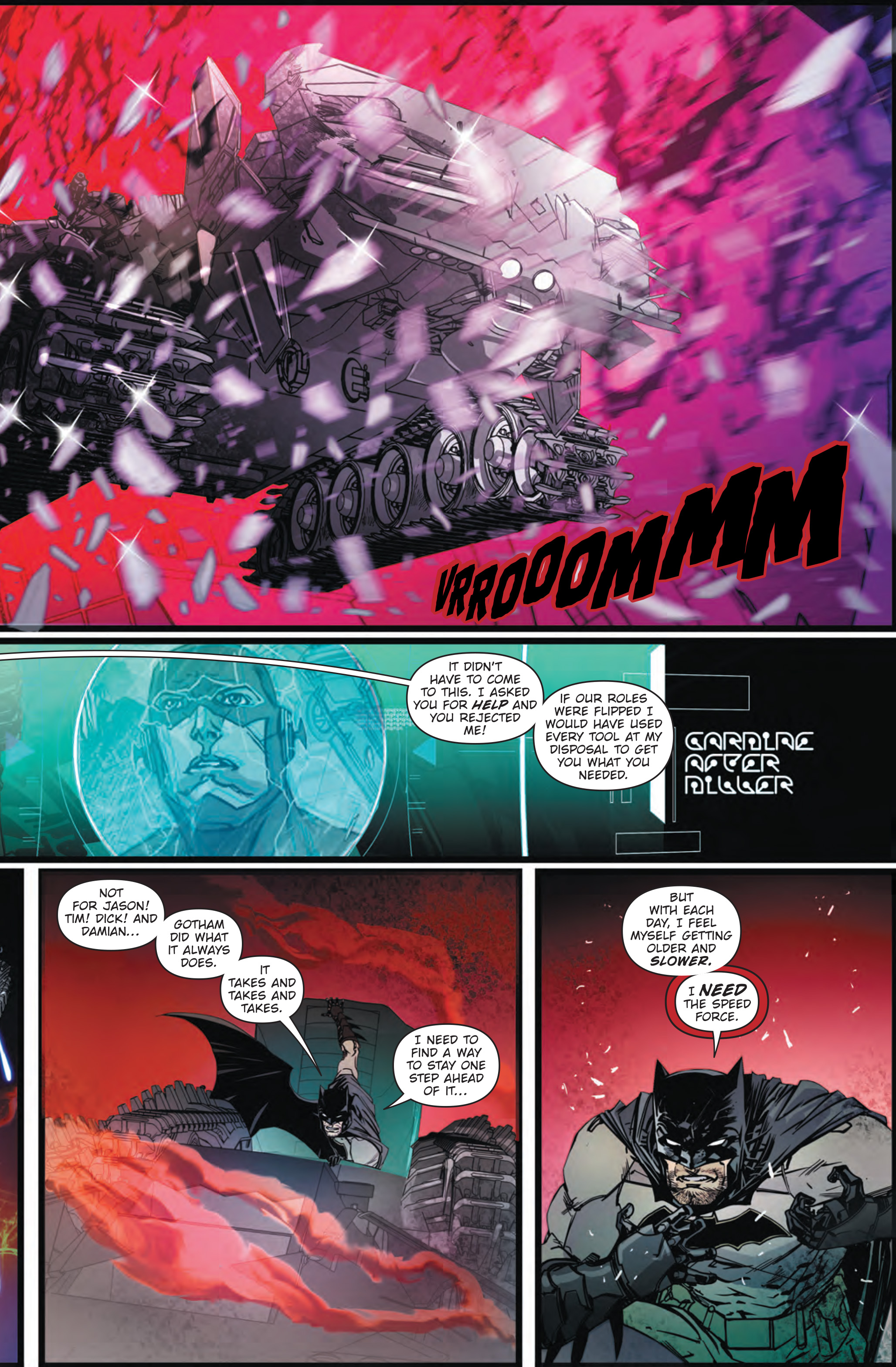 Keeping my feelings on how this Earth’s Batman is acting separate, I really love how the concept of this evil Batman, The Red Death, works. The speed force fused Bruce and Barry together—Batman didn’t just steal the speed force from The Flash, he merged with it. Bruce is in control and Barry is acting as the sub-conscious. This issue is definitely for those who think it’s better for Batman to stop his rogues permanently, with zero repercussions since this an Earth of the Dark Multiverse. Nothing in this issue has yet to convince me that Batman would speed through Gotham on a murder spree; it’s just not the Batman way.

The only thing more confusing than the actions of Earth’s -52 Batman, is why he decides to go to Central City on Earth-0. If Bruce is in control, why isn’t he terrorizing Gotham? What’s his end game with the home of The Flash? While the idea of Batman gaining powers from the speed force and becoming evil seems like a workable idea, I’m just lost as to the why of it all in this this issue.

Problems aside, Joshua Williamson script fits the narrative and delivers on most levels. The choice to have Barry play the conscious of Bruce is the brightest spot in the story, maybe only beaten by how when The Red Death speaks, his voice is both Bruce and Barry—or at least that’s my assumption. Williamson, who currently writes The Flash, was a great choice for this story for the obvious reason it being a Flash centric issue.

Di Giandomenico art is top notch. As a frequent collaborator with Williamson, he knows his way around the speed force. What I appreciate even more is how the art in this issue is nearly seamless with the rest of the Metal event. I never once thought I wasn’t reading and looking at a different story. And the scene where Batman drives into the speed force with The Flash chained to the Batmobile ranks up there with Greg Capullo’s work on Batman #5 from the New 52.

This issue suffers from pacing issues—which is no fault to anybody on the creative team. I needed to see Batman’s motivation for wanting to go on a murder spree explained more. I was expecting him to go back in time to prevent something terrible from happening based on his motivation. Pacing issues aside, this felt like a Metal story from beginning to end, especially with the art. I would love to see this story revisited with a second issue, or perhaps as a longer graphic novel. Giving Williamson more pages to work with would have fixed most of the problems with this issue. I’m calling it now though, The Red Death Batman will be a factor in saving the day—Barry Allen is part of him and that means something.