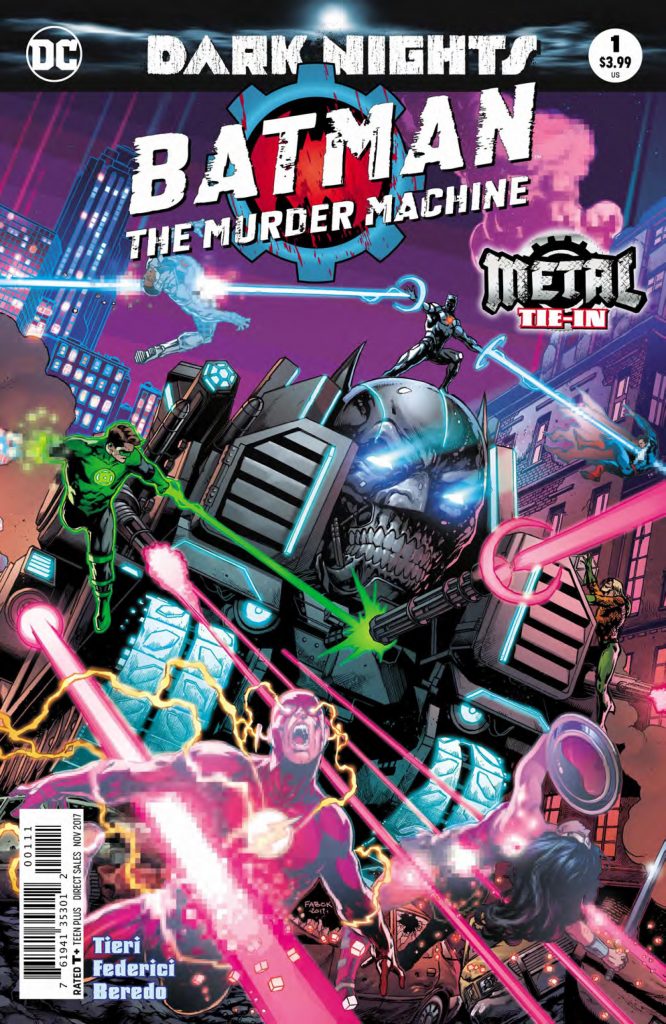 Metal continues to fire all on all cylinders as we explore these tie-in issues. From Gotham Resistance to these one-shots about the evil Batmen, the Dark Multiverse is beginning to become clearer. How important these events are to the greater Metal story is still unclear, but Batman: The Murder Machine #1 gives us some back-story on the evil Batman known as The Murder Machine, planting some seeds.

The issue opens and spends most of its time on Earth-0, while flashing back to Earth -44. This is a strong choice—it mixes The Murder Machine’s origin throughout the book, allowing this story to flow with all of Metal. Gotham and Central City have fallen, so Cyborg is keeping an eye on the remaining home cities of the Justice League. He’s reluctantly working with his father (Victor would rather his dad leave S.T.A.R Labs), when the Watchtower detects Batman teleporting in.

The flashback starts “months ago” on Earth -44—Batman is watching a replay of his rogues’ gallery brutally beating up Alfred, with Bane dishing out the killing blow that pulls inspiration from Knightfall. The League consoles Batman, but it seems that, on this Earth, his bond to Alfred is much closer than we’ve come to know. What works here is that we have clear motivation for Bruce’s actions—wanting to create an A.I. Alfred. Frank Tieri and Riccardo Federici are laying the groundwork for their own Batman themed Frankenstein story. 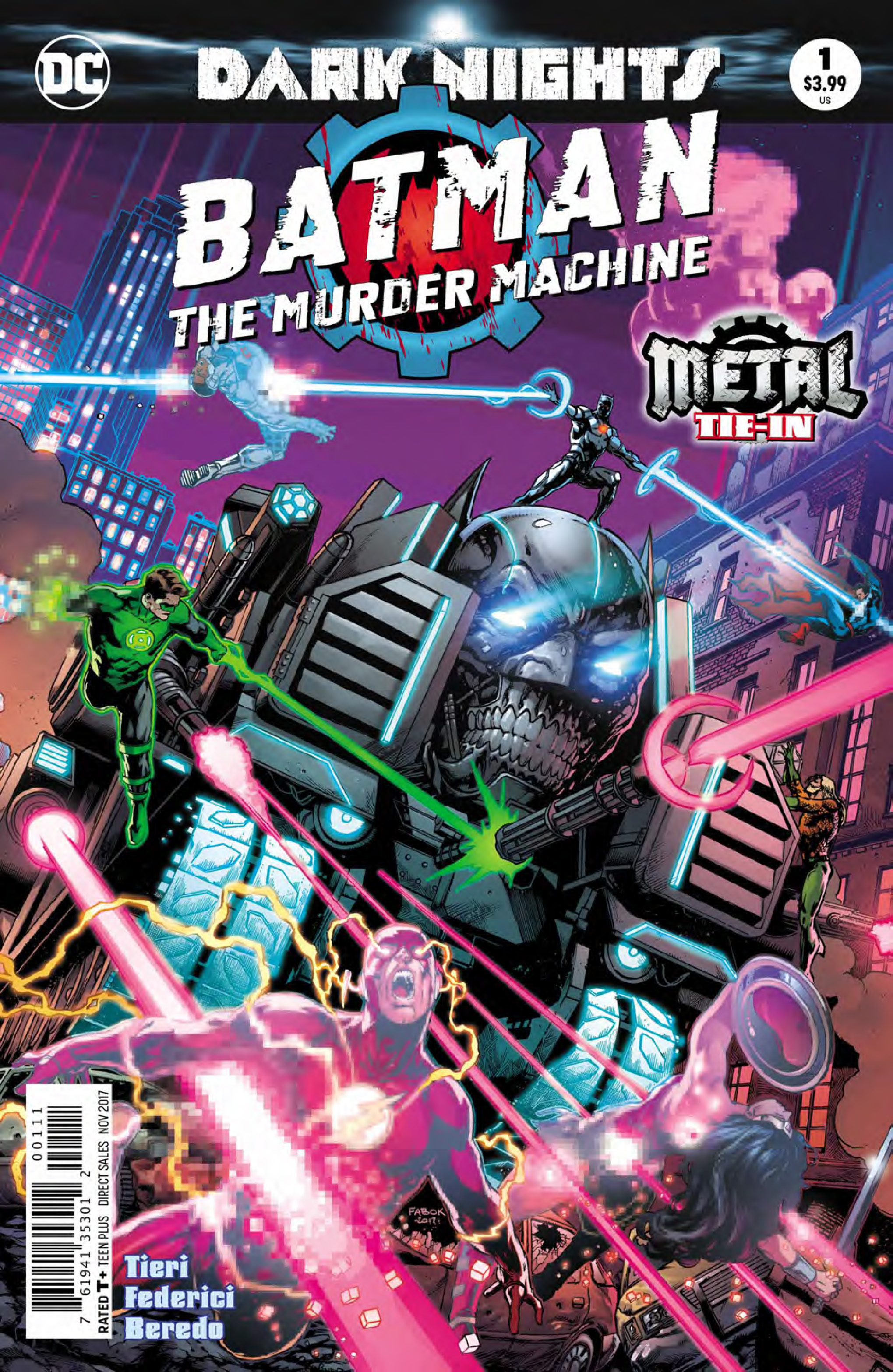 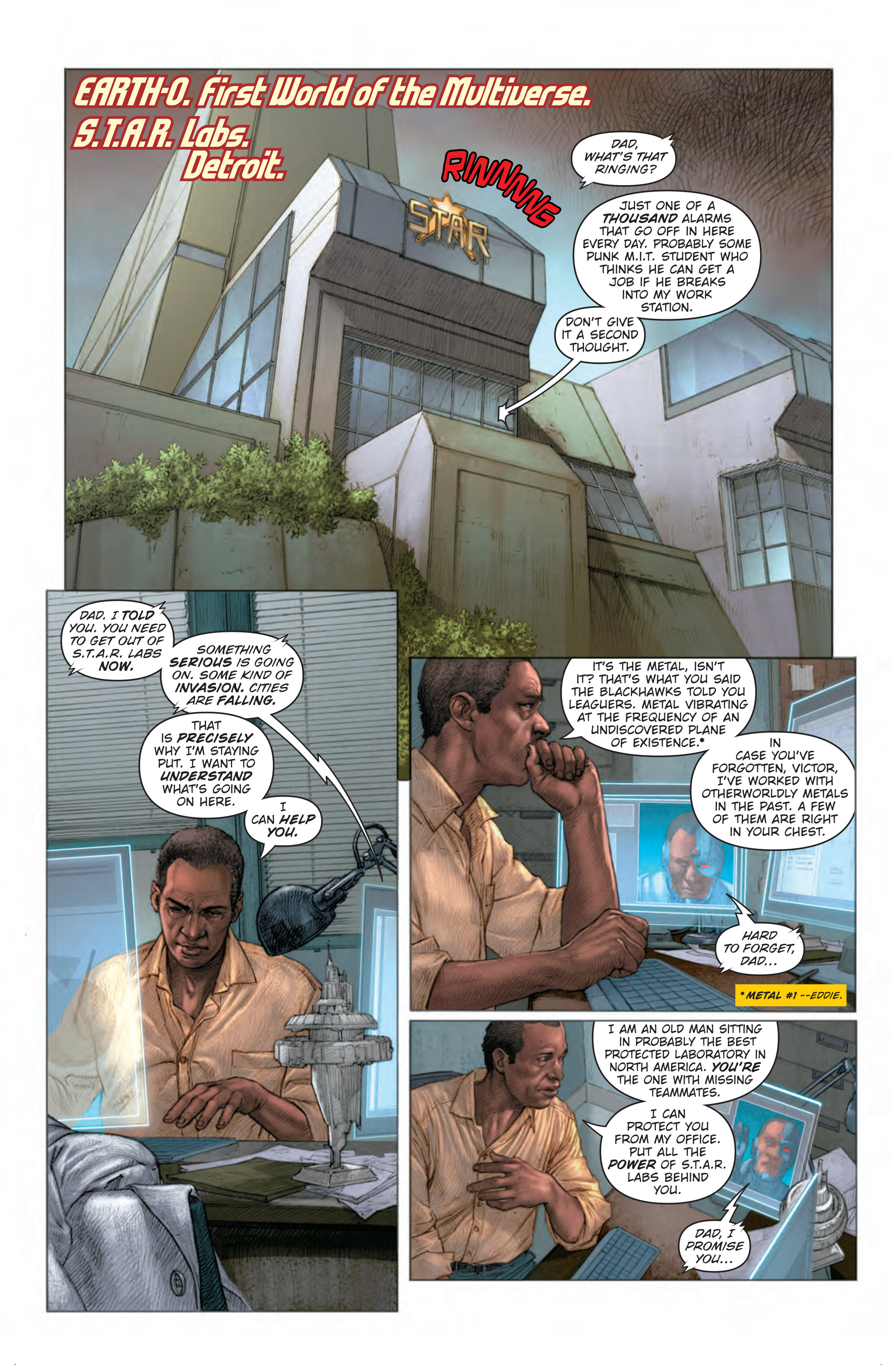 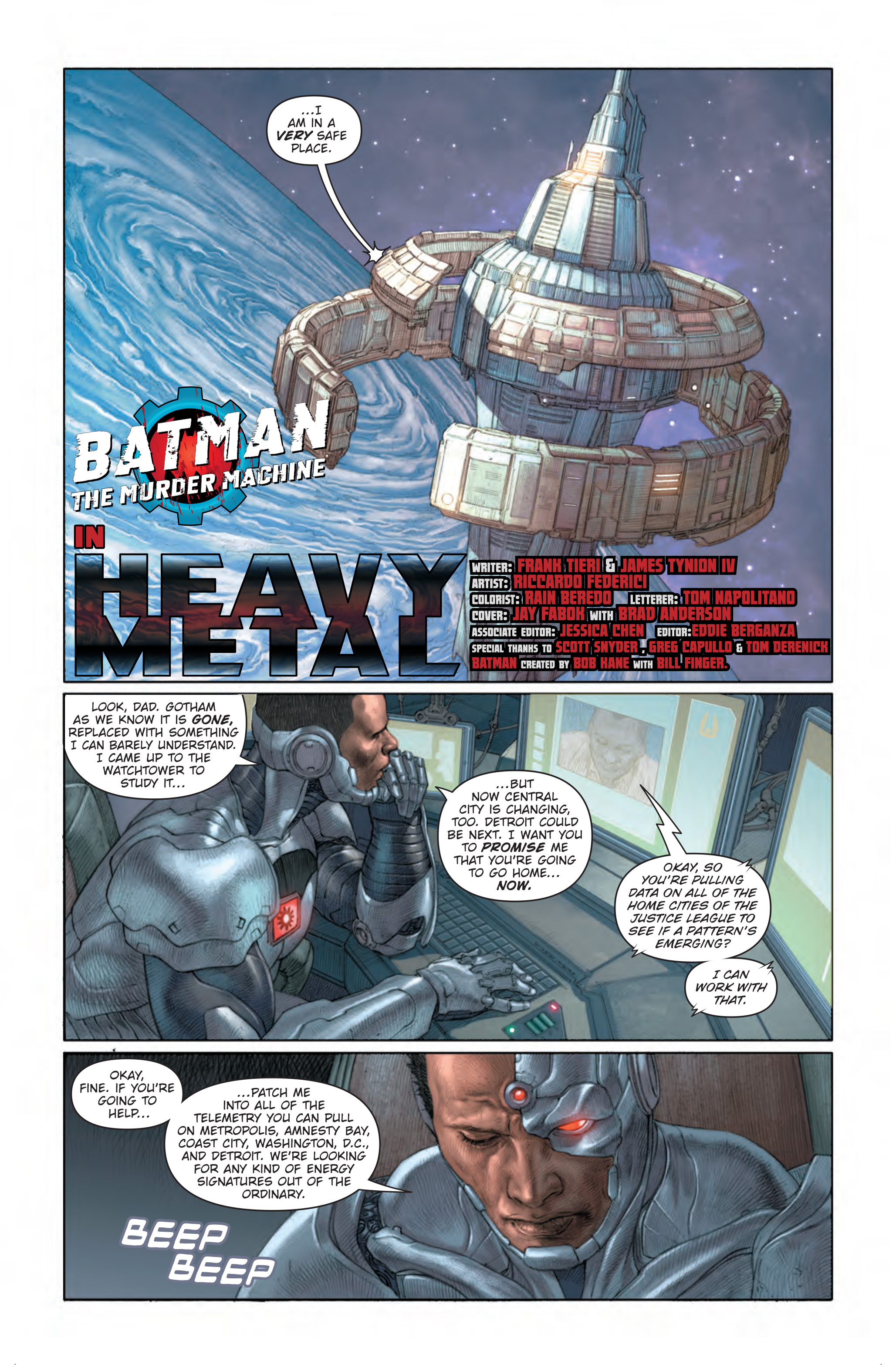 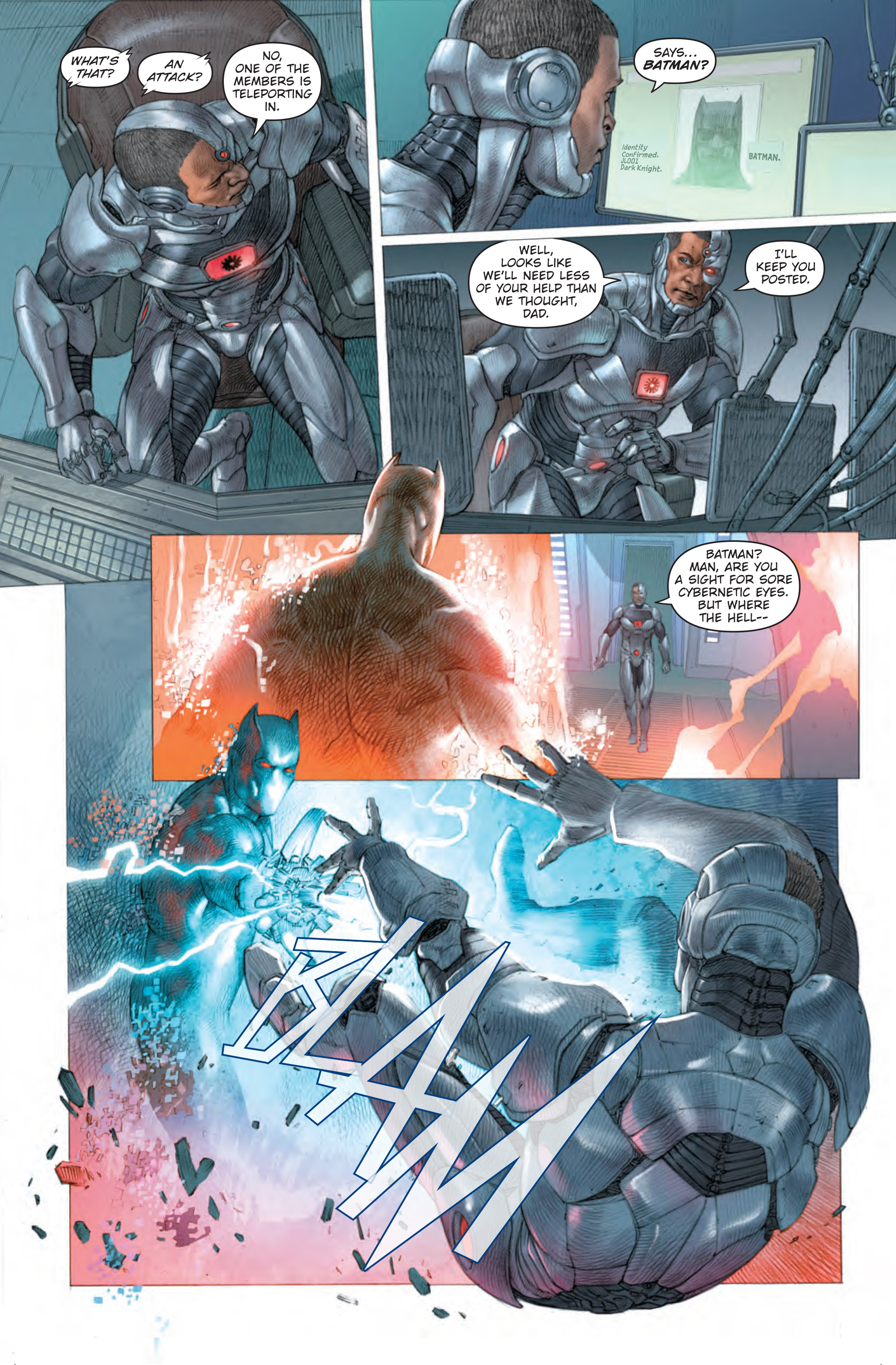 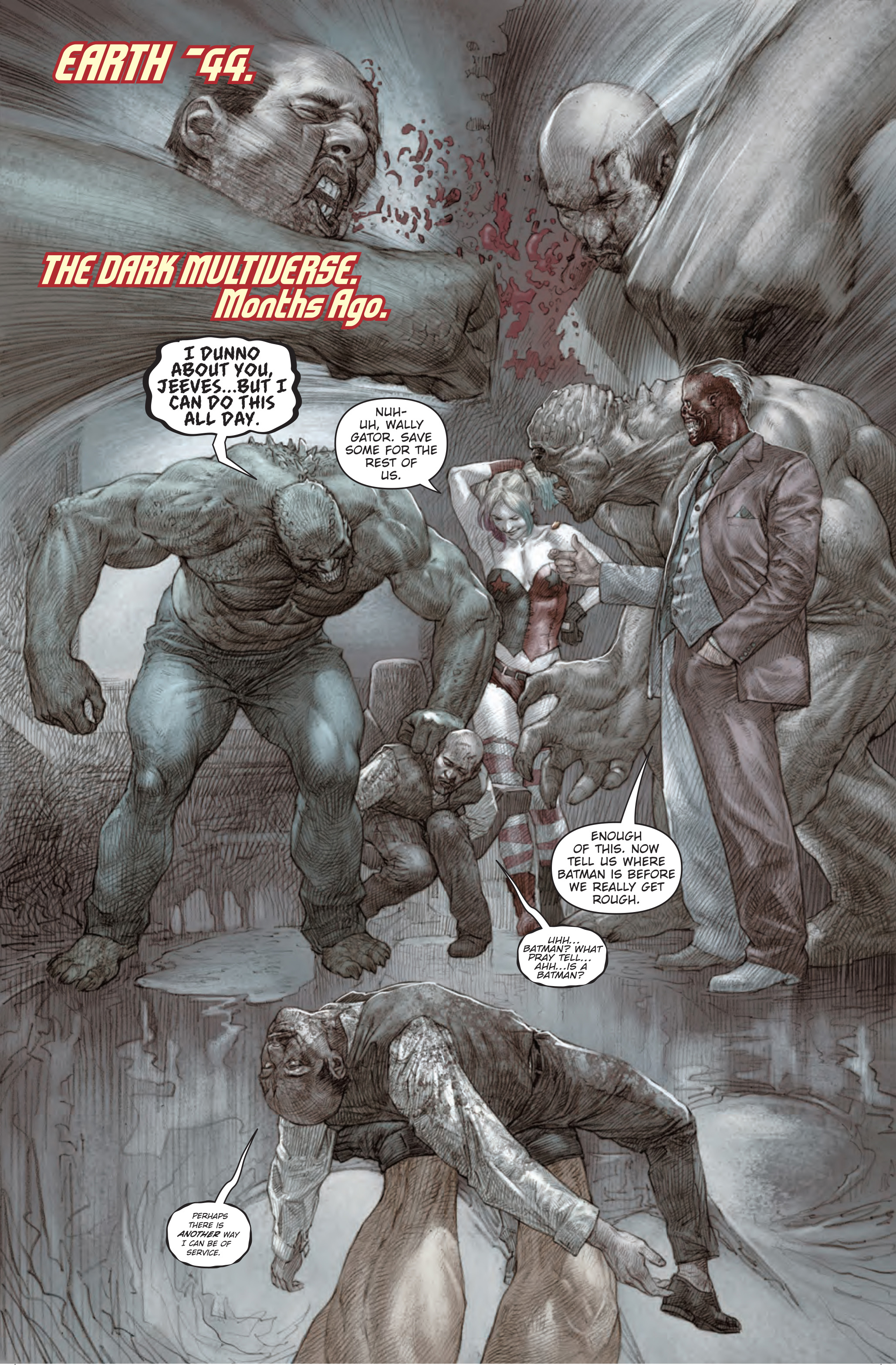 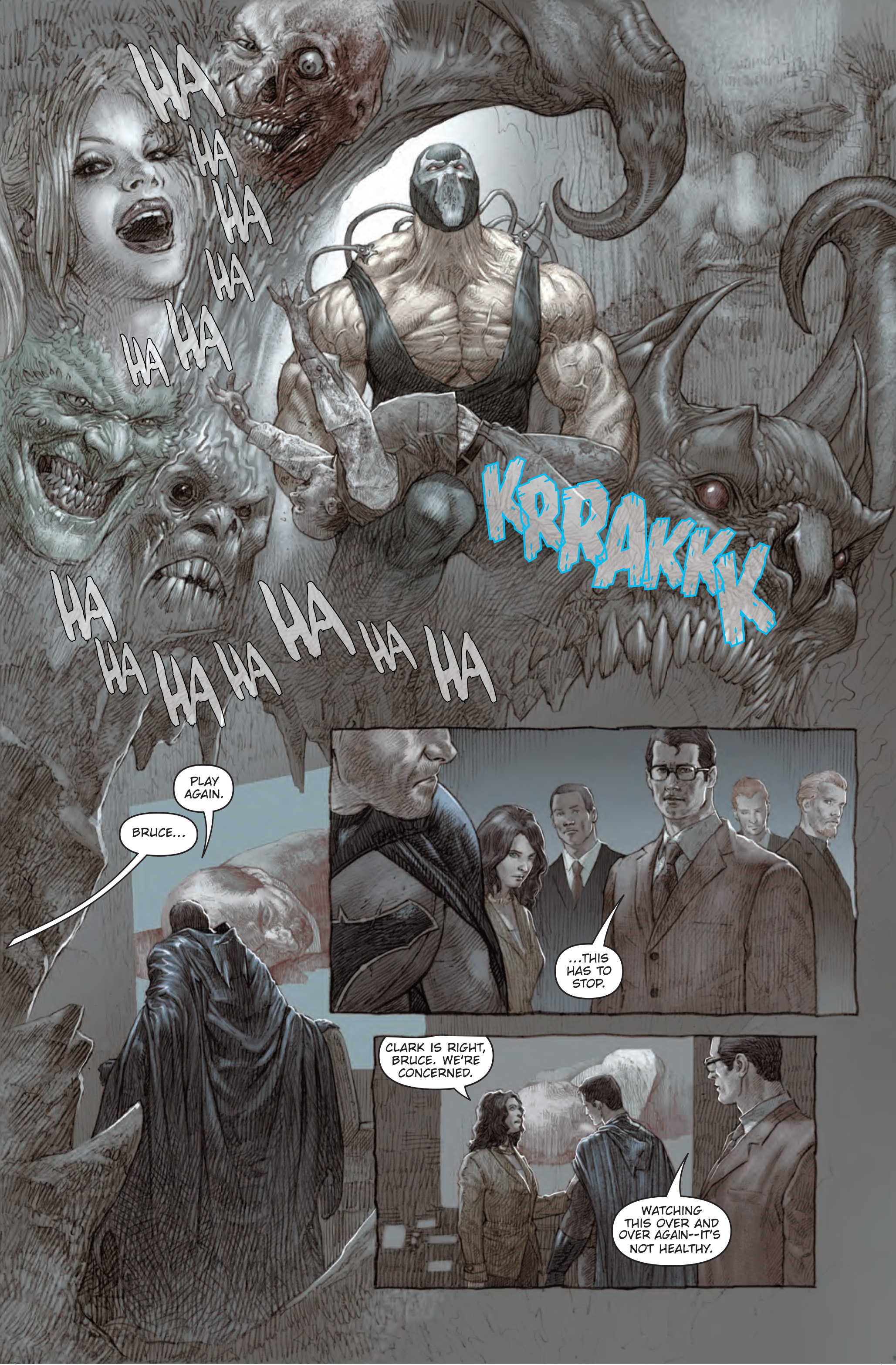 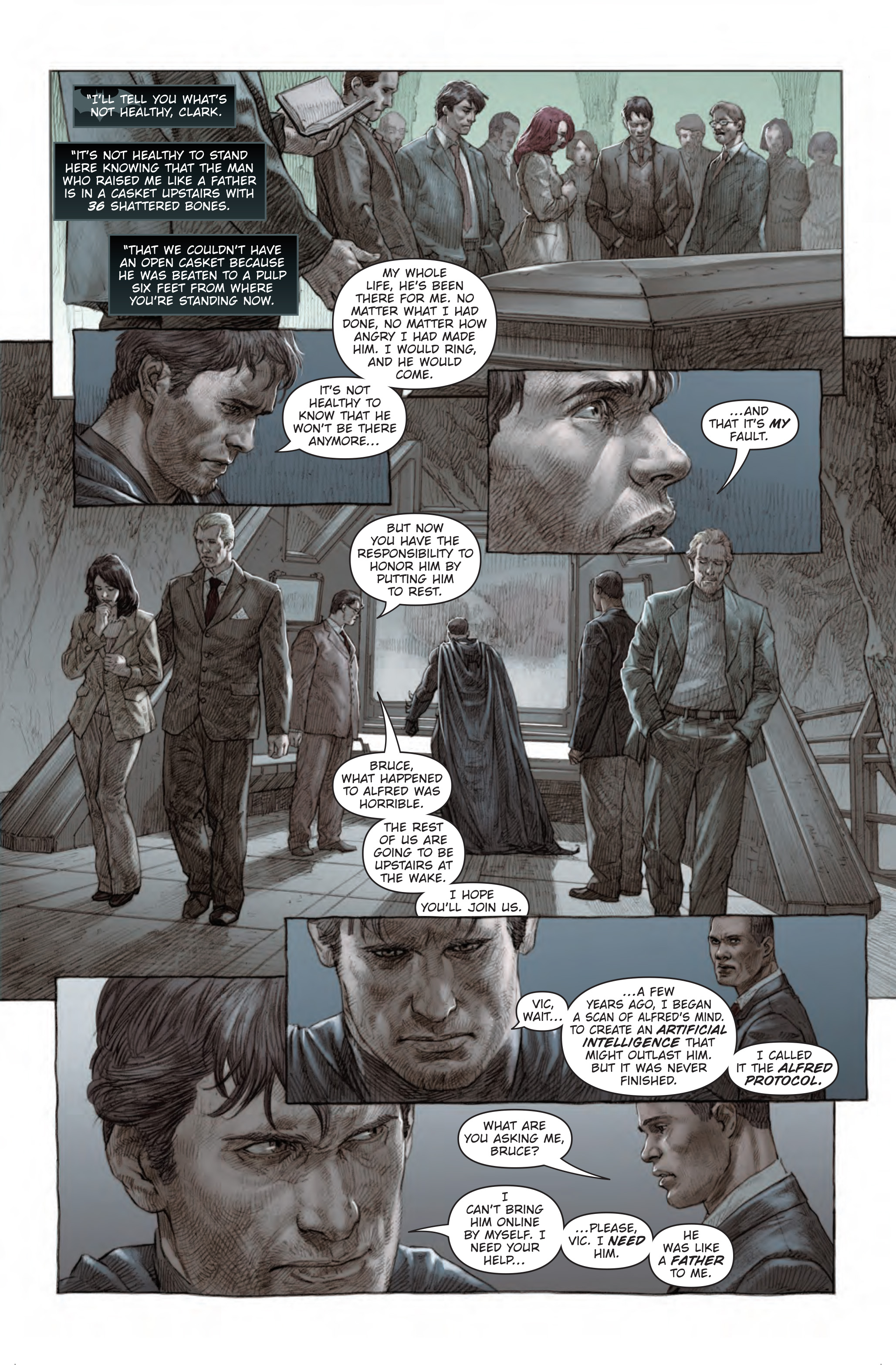 Every concern I had with Batman: The Red Death #1 is corrected for this story—jumping back and forth between the present and the past helped the pacing, the evil Batman has motivation that I’m invested in, and I get an idea of what his end game is. The Batman of Earth -44 didn’t suddenly go crazy and try to steal his friends’ abilities; his heart was broken. Bruce lost the father figure he had known most of his life and wanted to bring back a version of that man. The Alfred Protocol was supposed to give Bruce the man he cared for back, but backfires.

The A.I. version of Alfred wants to do what Alfred has always done, protect the young boy who lost his parents in an alleyway. He replicates himself and kills every Arkham inmate before killing what A.I. Alfred deems the most dangerous threat—Bane. The only fault Bruce has is his blind love for Alfred and wanting to reprogram him. Suddenly, this monstrous A.I. had merged with Batman.

While he’s most definitely an evil Batman, I understand every step that Bruce took and realize it’s not his fault. He wanted to stop the Alfred protocol, but he couldn’t. And it took over. The Murder Machine seems to have the same desires the other evil Batmen we’ve gotten a glimpse of—to reshape one of the home cities to the Justice League as they see fit. Part of that desire is born from the fact that their world was destroyed, as it was destined to be.

Tieri was able to step up and deliver a solid script. Another issue that feels right at home in the Metal storyline and he was able to tell this origin story within the confines of a one-shot. His pacing was very strong—nothing felt rushed or like it was dragging. I also enjoyed that he didn’t make The Batman Who Laughs a huge part of this story. I’m a fan of that evil Batman, but I liked seeing The Murder Machine stand on his own.

While opting to have the story jump between Earth-0’s present and Earth -44’s past solved pacing issues that Batman: The Red Death had, it left it open for confusion. Federici did an excellent job using different styles to help differentiate the two stories. The brightness of Earth-0 and the darkness of Earth -44 contrasts each other well. He makes the Dark Multiverse actually feel dark and dreary. Moreover, I love how, as things get worse off for Cyborg on Earth-0, the art starts to get dark, resembling Earth -44 ever so slightly. And Federici’s The Batman Who Laughs is downright scary—it gave me chills as I was reading.

Out of all the post Dark Nights: Metal #1 tie-ins we’ve seen so far, Batman: The Murder Machine #1 is easily the best to date. The pacing felt great and I didn’t feel like I was missing anything by the end of the issue. A great self-contained story that also progressed the greater event story. I really love how, although similar to Cyborg, this evil Batman is an amalgamation of himself and Alfred. It gives me hope that there is more to these evil Batmen that meets the eye.