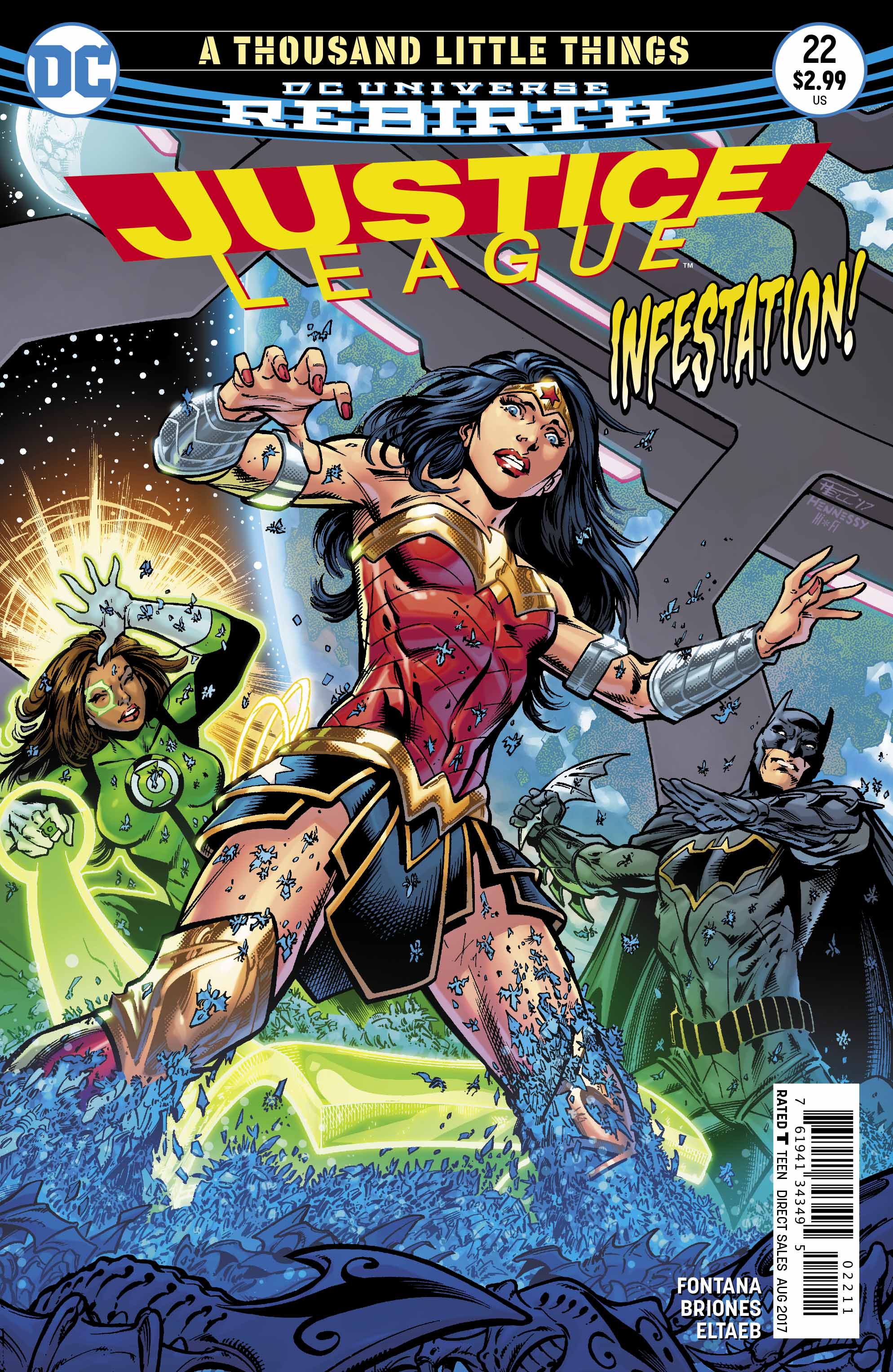 There’s been an outbreak in the tower and they’ve blocked off the perimeters. Which means we have a whole room filled with League members.

I love most team-ups with Batman (even when he battles alongside the Joker), and so it’s a major treat for me to pick up this series. From past glances, I noticed the series was struggling. I mean, it must be hard to manage 7+ A-list characters in about 30 pages. However, this was a terrific issue to begin with. If anyone was wondering to start Rebirth‘s Justice League, this is a good place!

Filled with banter and awkward introductions, Lois, the Reporter, Lane is trying to get everyone’s word in for her latest article. I have to admit, it’s nice seeing Ms. Lane working. Being a mother is a full-time job, but her being a reporter built a large part of who she is. Batman’s quite moody in this issue (nothing too new) it’s fun to see his attitude while he interacts with others, although expecting a high-five out of Batman is a bold move. It makes his relations to those he’s kind to mean all that much more. I feel like at times, he’s just the socially awkward dad.

It’s wonderful to see Shea Fontana on the team! She writes for the DC Super Heroes Girls series, an inspiring comic book series for young girls. I expect they will have darker plots and versatile writers bring so much to the table. I’m excited to see what she’ll do with Justice League. It’s always fun to have insights of the League’s tower. Cyborg shows off the nifty features to Jon and the team trains in the simulated station. Fontana depicts these characters with strength and joy, and each narrative suits these star heroes. Since the League is stuck there for a while, they have the time. I love the playfulness.

The chemistry of the League members is sweet. To see their interaction with the only child in the tower places a smile on my face (yes, even Batsy’s “ttch” at Jon, grow up Bruce!). Cyborg is known to love toys. I believe he genuinely has fun while showing Jon the games. Jess is an amazing addition to the Lantern Corps, and I enjoy the attention placed on her. 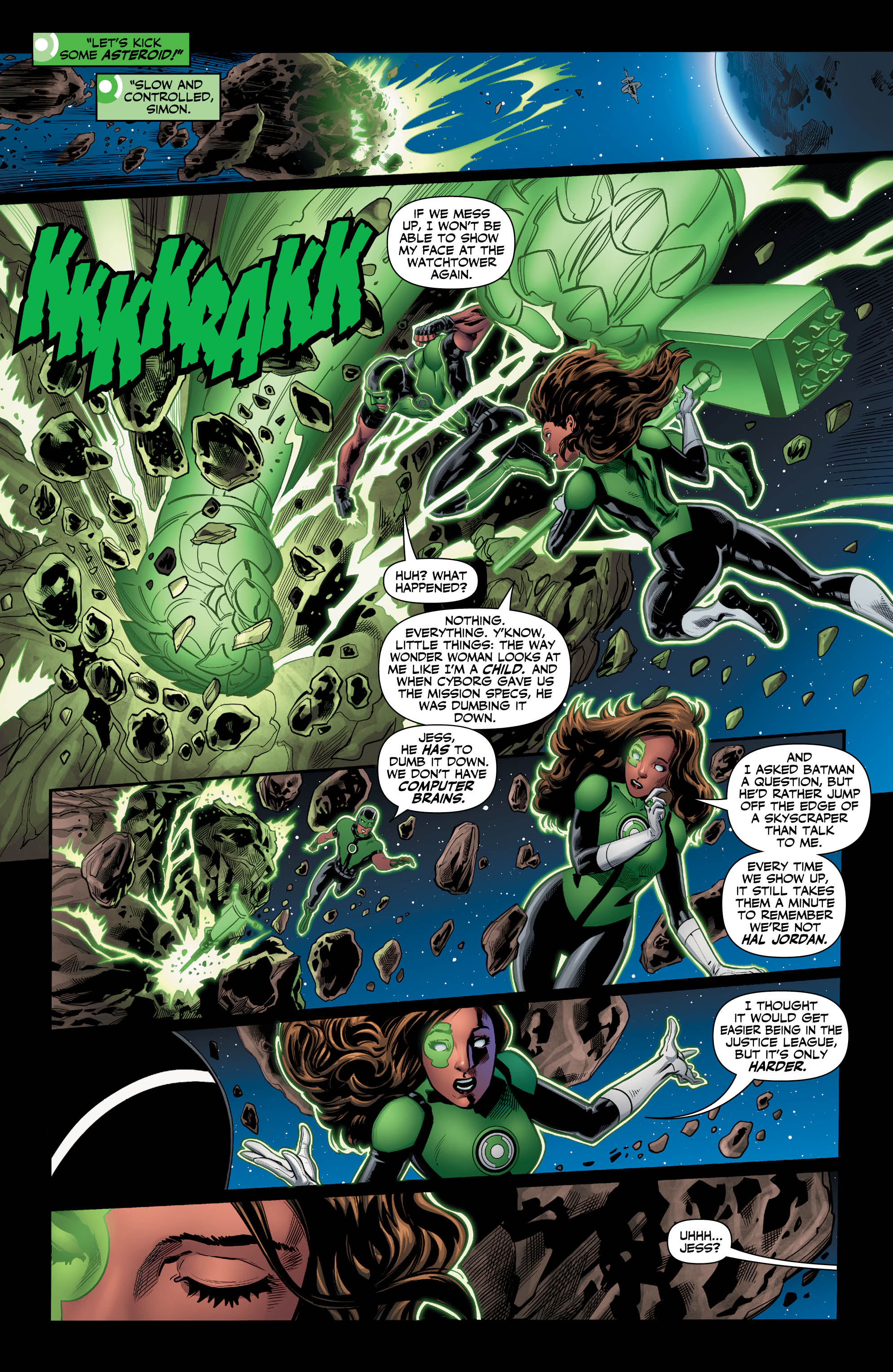 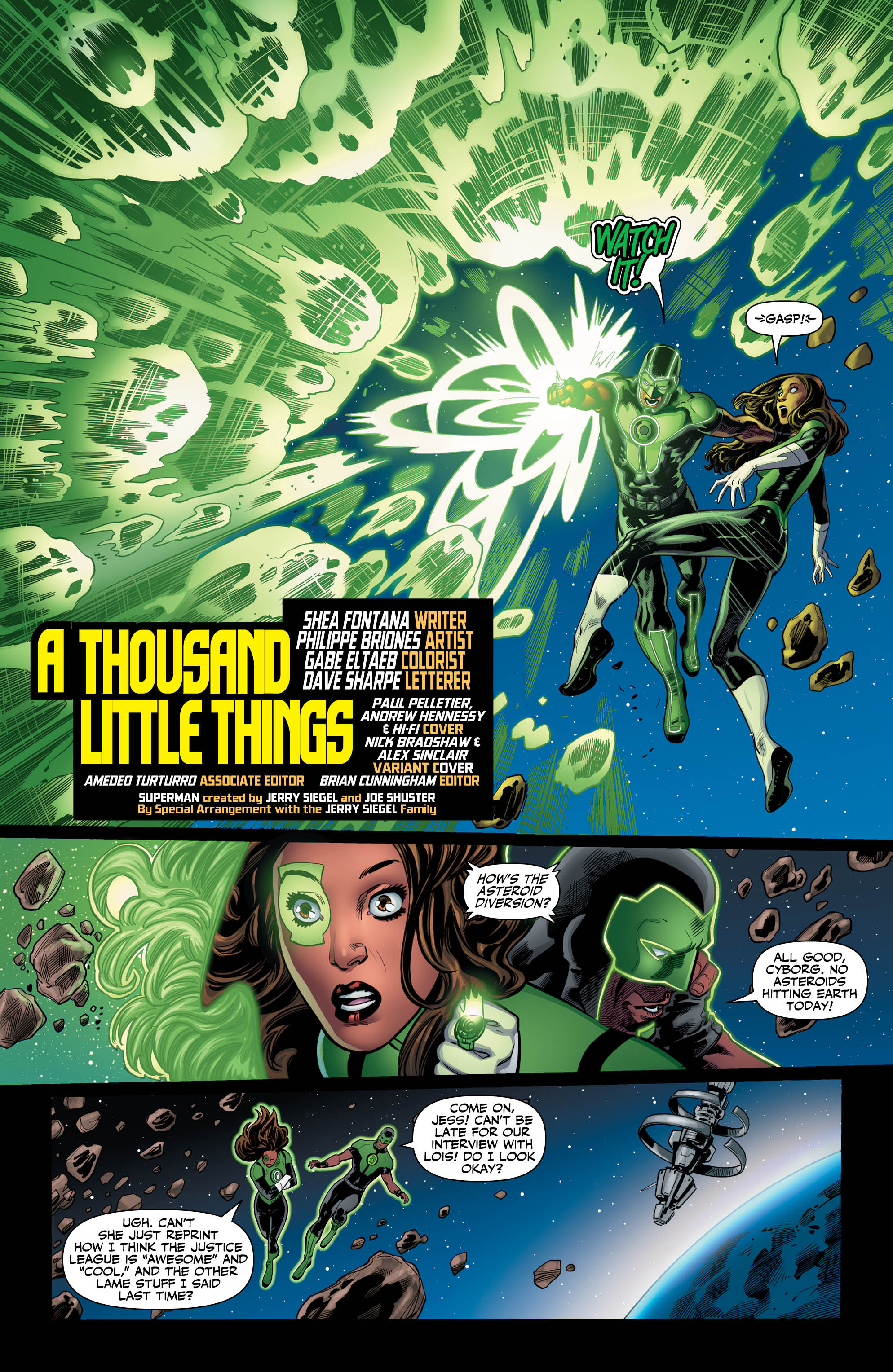 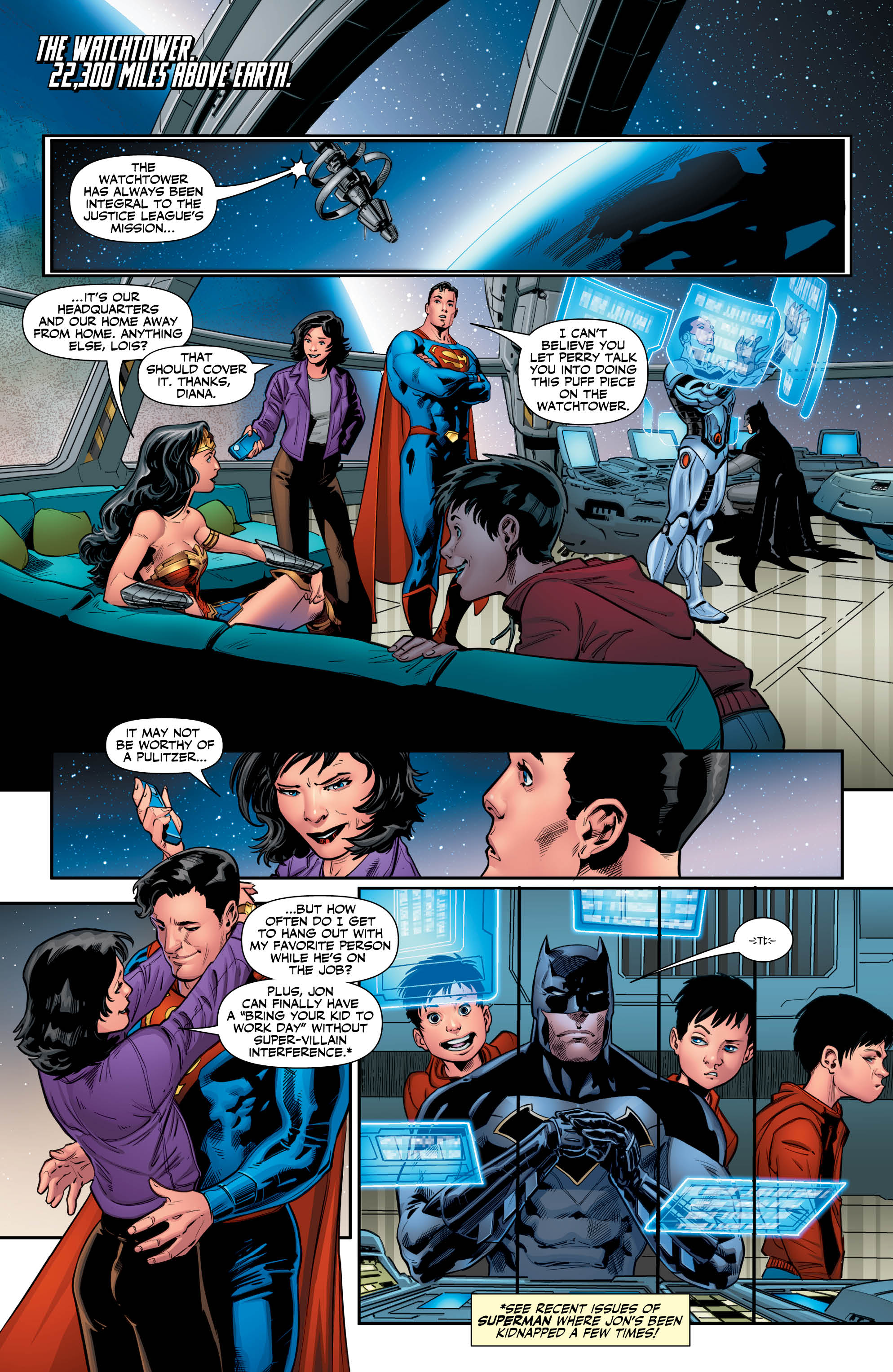 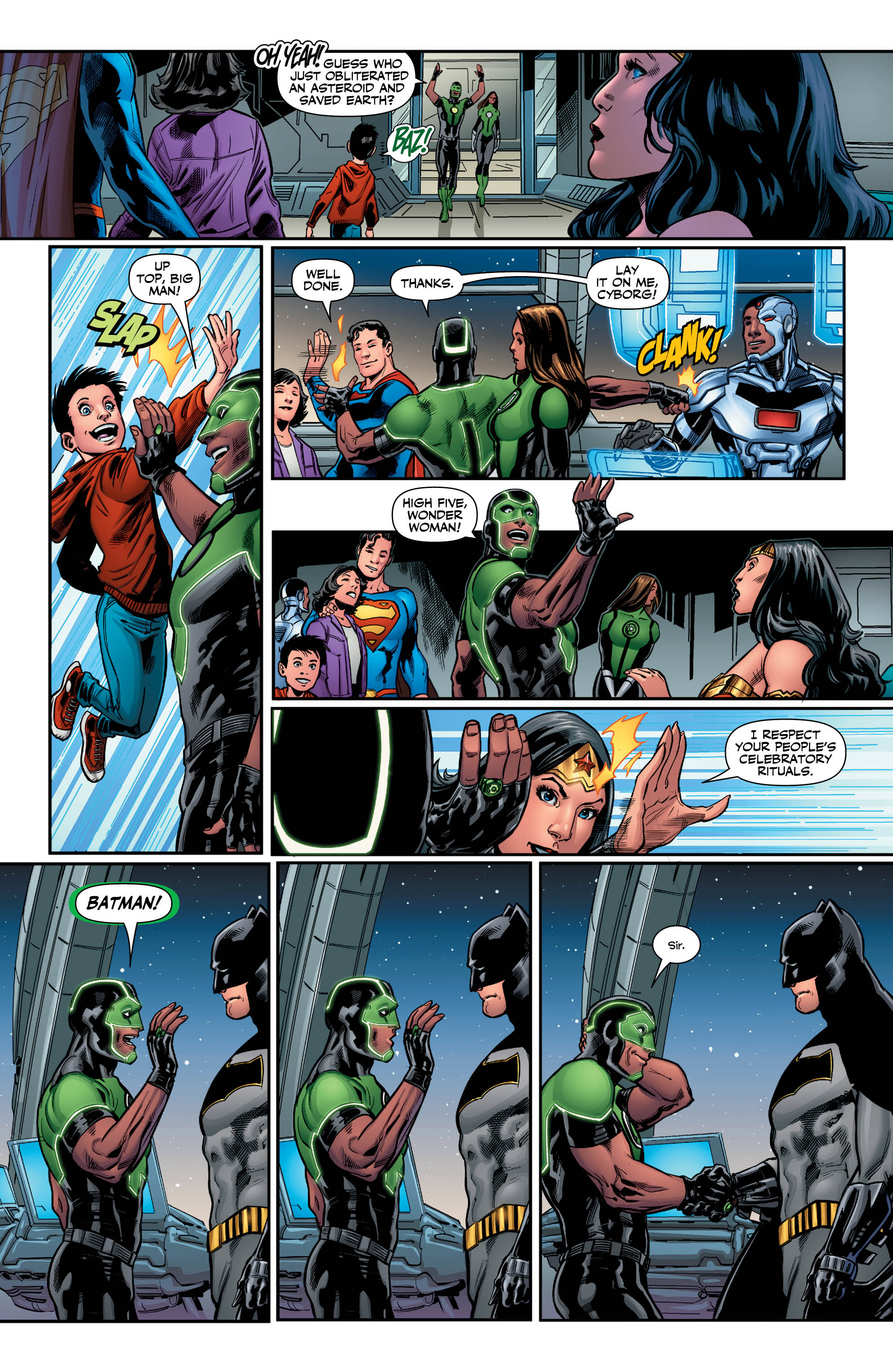 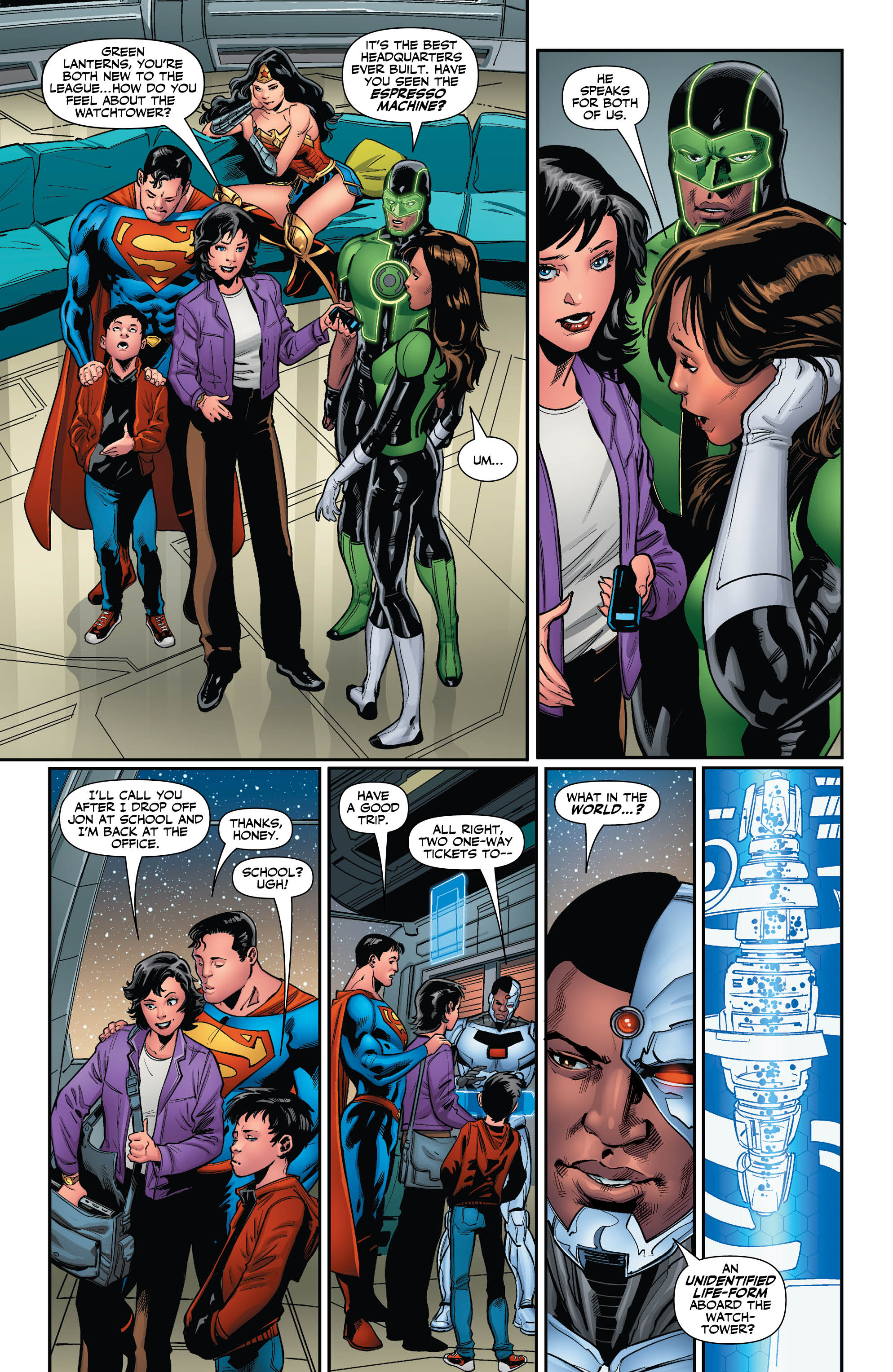 Philippe Briones and Gabe Eltaeb do a terrific job depicting the Justice League members. It’s not just boxed V-shaped male figures, with square jaws and unrealistic bodies. It’s family friendly and inviting, which complements the writing. There’s an innocence in the colors. They’re not bright and overwhelming during the attack, but soft.

As I said, definitely would recommend this issue if you’re just starting off with Justice League. It’s witty and lovable, perfectly befitting the joyful side of the characters. It’s a low-key issue and isn’t one to cause too much stress. With the revolutionary new Wonder Woman making great success, it’s wonderful to see more women work in the DC-comic industry, and give the female superheroes narratives that stand-out. Both Jess and Wonder Woman’s personalities were vibrant. In addition, to remind us that Ms. Lane is a journalist. A fun addition to your collection!