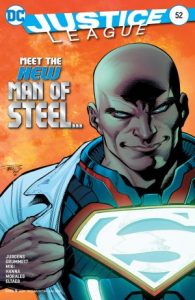 This is a book for the Lex Luthor fan.

Justice League #52 takes place before the events of Action Comics #957 and shows how Lex took possession of the recently deceased New 52 Superman’s cape and claimed the title of Metropolis’ champion. His character is written for exceedingly well; with Geoff Johns unavailable, having Dan Jurgens fill in was definitely the right choice, given his familiarity with Lex.

We start out by getting a much needed sense of how Superman touched Metropolis, The Daily Planet, Perry White, the Justice League, and even Lex himself. It was most interesting to see Luthor juggle his disdain for the departed alien with his own drive to protect Metropolis.

Now, we’ve always known Lex to be a villain who does the right thing in his own mind and it’s often been debated what he would do if Superman weren’t standing in the way, a question once posed in All-Star Superman. I believe we’ve received our answer here and it’s quite surprising that it happened in continuity. Come to think of it, it’s actually a good thing and can be explored for an indefinite period of time. This – along with the awesomeness that currently is Action Comics – could truly be the start of something great.

Sure, some may be indifferent to Lex taking somewhat of a babyface turn (wrestling fans will get that), but those who regularly read my reviews know I’m protective of the character and see this as being a natural progression, at least for this incarnation. Who knows, he may eventually go down a darker path again, but the level of depth he’s given here can’t be ignored as his comatose sister acts as his tether to humanity. If he ever does go off the deep end, it’s probably because harm came to her.

In the meantime, his ego is still as bulletproof as his war suit and I’m loving every minute of it. Not too much happens aside from him breaking up some street crime – it’s really about Lex’s journey as I keep stressing. If you like one-offs that really get to the core of a character, you too will enjoy this. Tom Grummett brings all of the action and emotion to life and his artwork remains consistent despite several inkers joining him on the book.

Honestly, this didn’t really function as a proper finale for Justice League, but it’s still one fine comic book and gets a high recommendation from me.

A Podcast For All Seasons: S3E6 – From Rebirth to Apocalypse