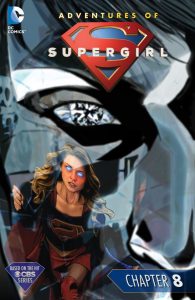 Sorry, I could find an image for only the digital comic. The cover art, however, remains the same.

Following up on what felt like a filler issue, Adventures of Supergirl has made a strong comeback with what I felt was quite the intriguing read. Although this limited run is a bit more brief than its television counterpart, I will still draw a parallel and say it felt like a mid-season finale; we still have awhile to go before things wrap up, but we’re provided with just the right amount of answers to satisfy and keep us coming back for more.

Shortly after finding out there’s much more to Vril Dox than meets the eye, Kara and Alex set search for Psi’s corpse in hopes of putting her to rest. Their sisterly bond is the backbone of the series, but it’s most certainly at the forefront here.

Over the course of their adventure, they get the impression that the events leading to this point may have been orchestrated and stumble across the hideout of Facet, who happens to be the big bad of this comic book tie-in.

Not only is Facet the ultimate eavesdropper, she is quite physically formidable and may have some familial connection to Kara. It almost seems like she’s an even bigger threat than anything we’ve seen on the TV show, or at least that’s how she came across in this issue. I’m not exactly sure if it’s a good or bad thing to establish threats greater than those seen in the show you’re basing something one, but we the readers win regardless.

It will be interesting to see where Sterling Gates takes the series next as he provided a cliffhanger worthy of prime time. Carmen Carnero is the latest in the line of guest artists to contribute and I was pretty impressed by her efforts. Her style is a bit more realistic and less exaggerated than what we’ve seen up to this point, but given the mid-season finale vibe that I spoke of earlier, perhaps it’s just what was needed.