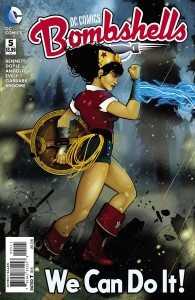 This has to be one of the better books that I’ve read and reviewed this week. Collecting three chapters from the digital first series, this sharply written and beautifully illustrated title features reinterpretations of some of DC’s most iconic female characters in a riveting World War II era spy story. Each chapter is drawn by a different artist, but the transition between them is not jarring and everyone involved does a spectacular job.

The opening chapter stars Kate Kane and succeeds in capturing the reader from the first page. It’s dark and rife with occultism as you would expect from a Batwoman story. Considering the character no longer has a solo title, I hope fans of hers give this book a chance as I feel they will be rather pleased. It was also cool to see this universe’s iterations of Alexander Luthor and Catwoman.

The second chapter is somewhat of a Christmas story (I stress “somewhat”) featuring Harley Quinn and Poison Ivy. It’s extremely fun and no fan of this duo should pass it up. Of all Harley’s recent designs, the Bombshells one has to be among the best, in my opinion. I kept thinking there is someone I know that would be perfect for cosplaying as Bombshells Harley, but that is neither here nor there.

As for the third and final chapter, it stars Supergirl and Stargirl. These versions are probably the most different from what we’re used to seeing when it comes to the Bombshells reinterpretations. In fact, they happen to be Russian stepsisters. Their third of the book lacked the excitement of the first two, but it was cool to get a surprise appearance from Swamp Thing.

If you’re looking for another great ensemble book featuring DC heroes, this is a solid buy. Hopefully we can bring you more coverage of this title in the future.