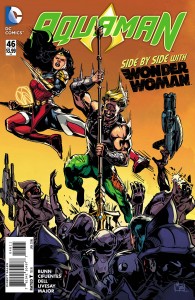 I’m not quite sure what to say about this issue. Despite Aquaman having so much going on in his life, not much actually happens.

We find him in the Amazon rainforest, which is quite lush and beautifully rendered by Vincente Cifuentes, as he learns more about Thule culture. He vows to find the real Mera, who was replaced by a shapeshifting spy at some point.

Just as we think King Arthur is out for justice, Wonder Woman shows up. Despite much exposition and some action, there really isn’t much forward progression in the story arc and what we do get isn’t terribly exciting. We do see some of a global scale attack, but again, it just isn’t engaging. As this goes down, the two heroes actually do battle a wave of enemies that includes King Shark but do so without breaking a sweat. It’s over as quickly as it began.

Unless you’re interested in seeing an Aquaman/ Wonder Woman team up, you can probably skip this issue. Hopefully next month brings us closer to Aquaman finding his lady love.