Synopsis: The finale of “Endgame” is here! Batman risks everything against The Joker! Who will laugh last? 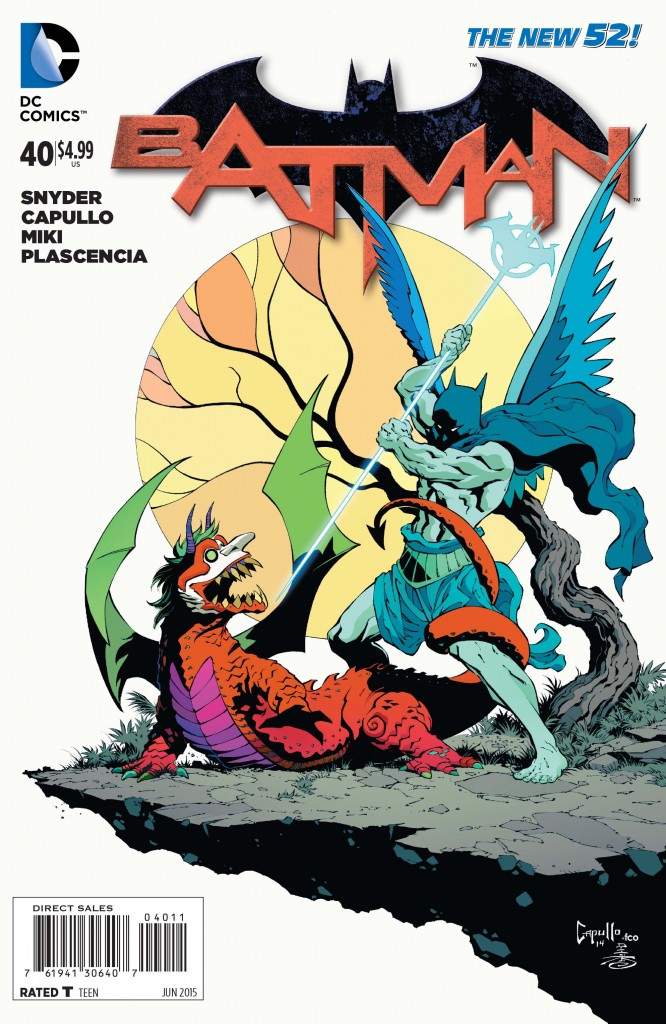 Endings are difficult. What makes them harder is if the story has been good. And creating a good ending is more difficult when it’s a story between two characters who have been at eachother’s throats for 75 years. That is the dilemma of Scott Snyder and Greg Capullo as they finish their “Endgame” storyline. I’ll get right to it: they deliver.

DC has done a wonderful job of keeping elements of this story under wraps (at least before the new Batman taking over, which I won’t get in to). Fans were shocked back in October at the end of issue #35 when we saw that devilish grin on the Man of Steel’s face. What has taken place since then is the Justice League recovering, Alfred losing a limb, the city turning into walking Jokers and with issue #40, a bloodbath.

I can’t say enough about this ending these two geniuses have put together. We start the issue almost immediately after #39, with “Batman” and the family joining some of their greatest enemies to try and get to the Joker and extract the dionesium from his spine. In the first of many twists, it doesn’t work and the Clown Prince releases a gas but finds out the man under the cowl isn’t Bruce (which clearly answers any questions on if the Joker knows Batman’s identity), but Dick Grayson. Cut to the underground, where the real Dark Knight is working with Julia to diffuse the situation. It seems like our hero is ready to save the day when Mr. J. slices his way back into the story, even carving a little smiley face into Batman’s back. What we get next is 11 pages of an all-out Batman vs. Joker bout that fans have been waiting for since 1940. Anyone who doubted that these two match up physically may have their minds switched now. Capullo pulls no punches (literally?) and illustrates a raw, bloody, epic match between the two that I couldn’t wrap my heard around… and I mean that in a good way. Meanwhile, Snyder is busting out pitch-perfect dialogue that I have since read three times over because it’s just that good. By the end, no one wins and we even learn a little bit more on Batman’s true feelings of his nemesis. Or should I say friend?

“Endgame” is a perfect reaction to “Death of the Family” and I can’t choose which one I like more. Why should I? I thought they were both done well by artists who truly understand the relationship of these legends. I loved this issue, this story and this team. It’s a shame they won’t be doing a Joker story anytime soon. I know Snyder said this was his final Joker story, but never say never. Next up for the team is a switch behind the cowl, and it’s one I’m not that excited about. That issue is neither here nor there. I’ll just say “Endgame” is a perfect celebration of one of the most popular villains of our time.