Synopsis: You’ve been waiting for the debut of Bluebird – and here it is, though this story may not have a happy ending! 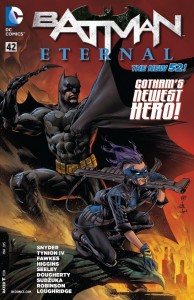 Has everyone really been waiting for the debut of Bluebird? Am I alone in saying I’m not particularly a fan of Harper Row, let alone two issues of a Batman comic that has very little of the Dark Knight making an appearance? I’ll move along now.

This week’s Eternal picks up right where last week’s left off. Harper Row has suited up as Bluebird to save everyone infected by the nanovirus and under the Mad Hatter’s control… which just so happens to be most of the Bat-family.

Meanwhile, Stephanie Brown (Spoiler) has been taken by Killshot, per orders. We find out who is behind the “protection” but spoiler alert: she still gets kidnapped at the end of the issue.

Overall, I have enjoyed the Eternal run. It’s been exciting, fresh, epic and just awesome to look at. My only negative reviews were to issues that stuck to the Corrigan/Spectre story line and the nanovirus story line. Though this issue (and last week’s) were more enjoyable than earlier issues, I’m not finding the enjoyment and fun behind reading this like I do other parts of this tale. I also would never question Scott Snyder. Shame on the man that does. Ever since he introduced us to Harper Row, though, I haven’t been all that intrigued by her. I can admit I’m not one that gets excited over new characters, and sometimes it takes a while for me to jump on board. Maybe I will come to like her at some point?

Anyways, Kyle Higgins handled the scripting duties this week while the art was shared by Jed Dougherty, Goran Sudzuka & Roger Robinson. I found it a little odd the book is shared by three artists, but still it works. Whoever drew the Stephanie Brown portion did a mighty fine job.

We inch closer to what is sure to be a monstrous finale to an epic story and maybe (hopefully) we’ve capped the nanovirus part.

Gotham Review: What The Little Bird Told Him

Batman turns back on Netflix