In my middle school years, I was addicted to trading card games. As a product of the 90’s, I got swept up in the Pokemon and Yu-Gi-Oh trading card crazes. I would while away hours building my deck, trading cards, and of course, playing my friends head-to-head. It was a hobby and not one I’m particularly proud to admit these days, but it was fun while it lasted. My collection is for the most part intact, but collecting dust somewhere. I’ve grown to collect other things like figurines and comic books. I suppose I’ve been living under a rock, because I wasn’t aware that they sort of married the two concepts within the last couple years. In 2012, a company called Cryptozoic Entertainment released the DC Comics Deck-Building game.

Being that I’ve only just discovered it today, I’m not very knowledgeable on the game. From the light research I’ve done, the game requires players to build decks centered around one oversized card representing a superhero or villain. Each oversized superhero card contains a special power and it is up to the player to center the strategy of their deck around the superhero and his power.

The news today is that on Christmas Eve (a little too late to cash-in on Christmas, unfortunately), Cryptozoic Entertainment released a new expansion featuring the Dark Knight and his arch-nemesis, The Joker.

Here’s the description of the set, entitled Rivals – Batman vs. The Joker:

It’s the head-to-head showdown comic book fans have been waiting for! This set contains everything two players need to settle the question once and for all… Can Batman take down The Joker or will he go mad trying?

The action is fast and furious, as players vie to add the right mix of components to their decks. When you’re ready, you can launch an attack directly at your arch nemesis! The first player to drop their opponent three times wins the game instantly, however, it will be harder to do each subsequent time. Also, if the main deck runs out, victory points are counted to determine the winner.

This set is a great introduction to the Cerberus Game Engine, which is used in the best-selling DC Comics Deck-building Game line of products. The addition of the direct attacks will appeal even to seasoned deck-building fans.

Batman and The Joker each come with three oversized character cards. When one is beaten in direct combat, the next one is revealed. The new one will have a boosted-up ability and will be harder to take down than the previous one. Naturally, the combatants can utilize Block cards to protect themselves. It’s a brand new experience, not to be missed! 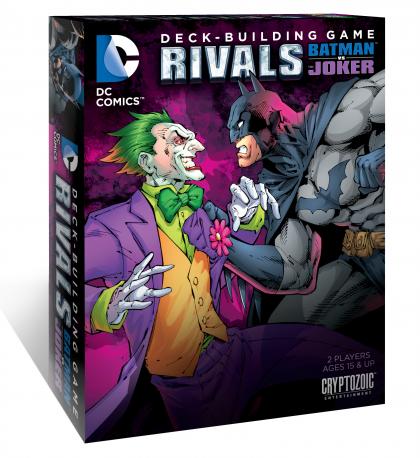 And here are the contents of the package: 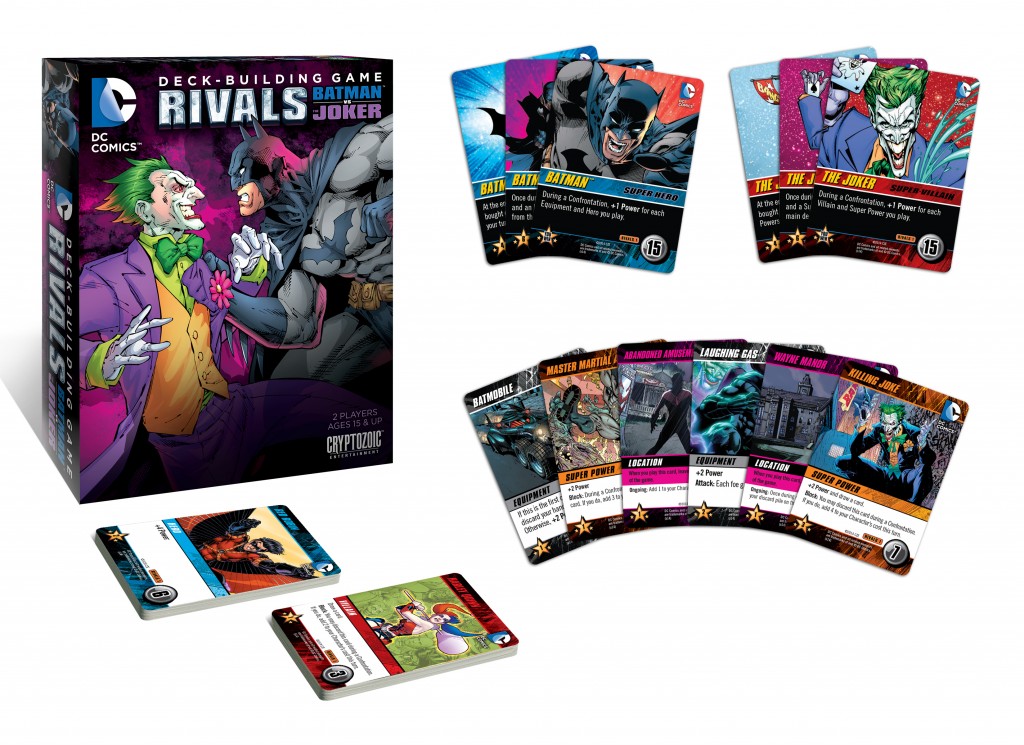 I can’t want this. I don’t have the means to fund another addiction!