Hi DC fans, last week I reported new of details that had been released for, Teen Titans Go!: Season 2 Part 1 Appetite for Disruption and this week the news continues. Warner Brothers have released the Trade Ad and Trailer for the DVD collection set. The DVD Set is due to be released on April 15th, 2015. 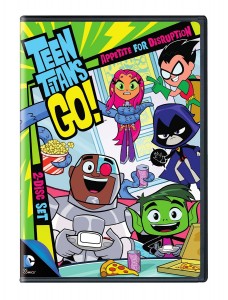 The trailer can be found on the source link below.