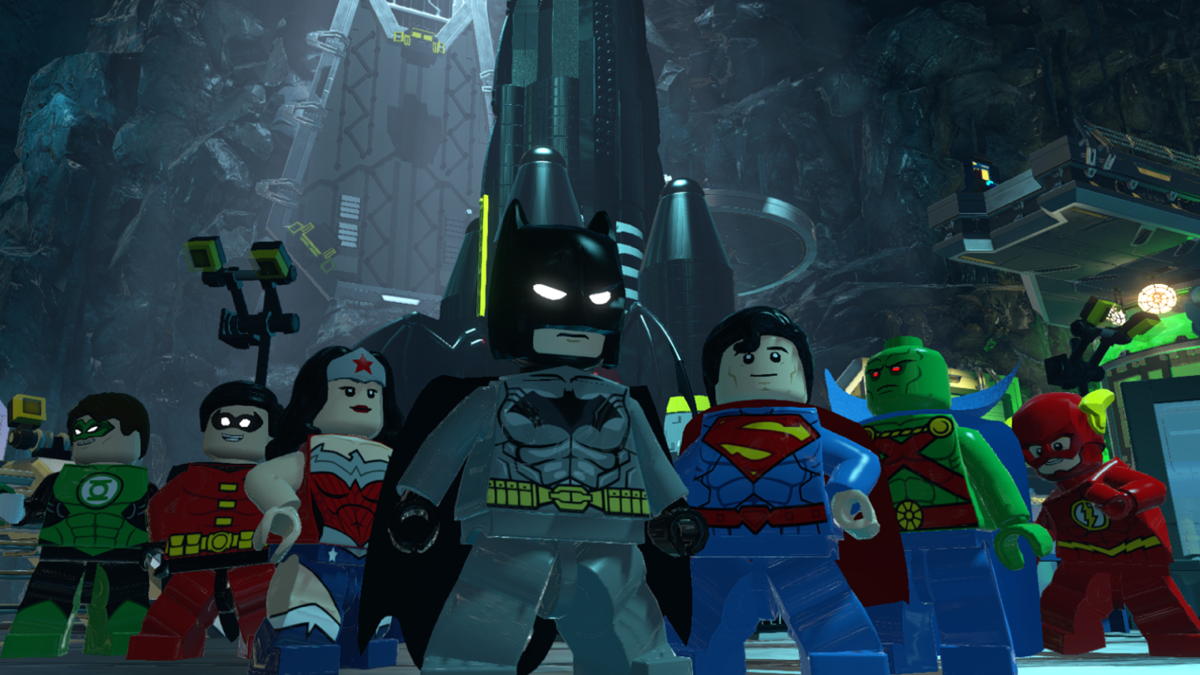 Overview: The best-selling LEGO Batman video game franchise returns in an out-of-this-world, action-packed adventure! In LEGO Batman 3: Beyond Gotham, the Caped Crusader joins forces with the super heroes of the DC Comics universe and blasts off to outer space to stop the evil Brainiac from destroying Earth. Using the power of the Lantern rings, Brainiac shrinks worlds to add to his twisted collection of miniature cities from across the universe. Now the greatest super heroes and the most cunning villains must unite and journey to different Lantern worlds to collect the Lantern rings and stop Brainiac before it’s too late.

When I played the first LEGO Batman game back in 2008, I never once considered that it would have a sequel, let alone a second sequel. But here we are anyway. I played through the main story of LEGO Batman 3, explored some of the features, and even played with a couple cheats activated (hey, collecting studs is time-consuming, all right? I got a review to write here!).

One thing I love about games is how they pull you in. What did it for me was the epic use of Danny Elfman’s classic score in the beginning, before you even start the game. When I hear that music it pumps me up, so when the prompt came I eagerly began my new game. One thing I noticed right away was how simplistic the controls were. The game was very easy to just pick right up and start playing.

The visuals were stunning, as well. The graphics didn’t feel next-gen (I played the PlayStation 4 version), but were still nice to look at. The levels were designed with surprising attention to detail, and were so much fun to explore. You can interact with almost everything in every level in one form or another.

The gameplay was pretty standard as a beat-em-up and puzzler. Attack enemies up close or from afar, collect studs. Find puzzles, solve them, collect studs. But there were a couple of different types of gameplay added that we haven’t seen before. What I have lovingly dubbed the “Hackiverse” is one such new element introduced to the series. Instead of matching colors or fitting pieces together, your character is transported as a virtual simulation into the Hackiverse, traversing obstacles and navigating mazes to reach your objectives, be it to unlock characters or discover passcodes. Some of these puzzles are extraordinarily easy to solve, while others present a bit more of a challenge by introducing moving floors and dangerous computer viruses. It’s a welcome change from the usual puzzles we’ve seen in the past.

There is also the interesting adaptation of sidescrolling space shooters in the game. You take control of a space vehicle, flying around a huge area, and shoot targets that attack you. It’s fun to play, and it’s also very easy. It is repetitive, but these scenarios happen infrequently enough that it doesn’t matter.

I always hate ripping into games I like, but I’d be doing you, the reader, a disservice if I didn’t inform you of the problems I found in the game. While the controls are simple, they’re not very responsive when I’d like them to be. For example, in one level you have to swim to an objective and then swim back to a small ladder. If you don’t hit that ladder at the exact right position, you don’t go up the ladder. Swimming, itself, is slow and tedious, and can be frustrating when you just want to move on to the next part of the mission.

Next, I had a problem with the other characters in my party frequently getting stuck in parts of the levels that they shouldn’t have been able to reach in the first place, and the only way to get them out was to shoot or melee them until they respawned back on the level. This happened to me three times once I started exploring the five Lantern worlds, right when I needed those characters in order to advance to the next stage of the level.

Not a bad game by any means. Seamless multiplayer joining makes the game great to play if you have a friend who wants to join in. There is so much to do in LEGO Batman 3: Beyond Gotham, you’ll be putting in at least 20 hours of gaming time. There’s also a season pass for dedicated gamers who want to continue the game long after the story has ended. The Season Pass will include six add-on content packs that feature unique themed levels, stories and free play modes. Players will gain access to more than 40 characters, vehicles, achievements and more. The Season Pass is currently available for the PS4, Xbox One, Xbox 360, PS3, and PC for a great price of $14.99. Each pack can be purchased separately at $2.99/pack.

DKN Score: 7.5/10. LEGO Batman 3 is a great game with lots to see and do…as long as you don’t mind the inevitable periodic technical hiccups and glitches along the way.