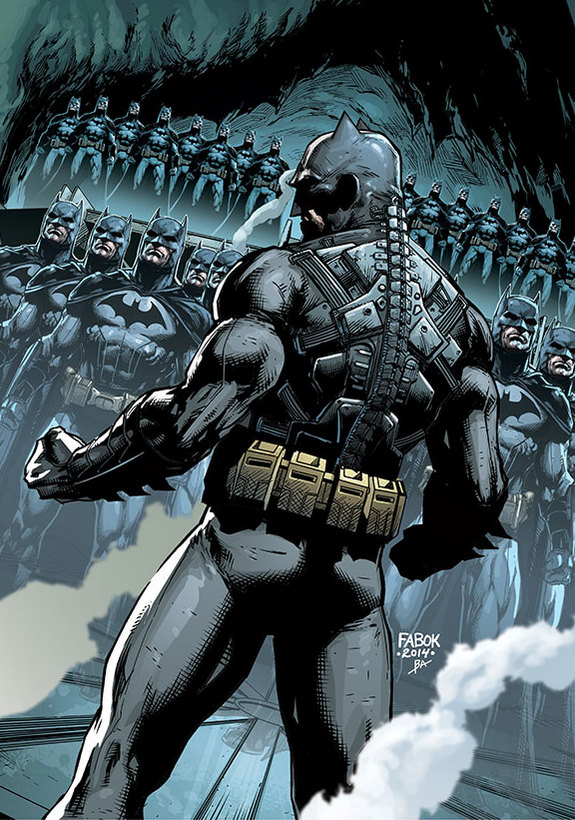 The first thing I should address in this review is that this book takes place five years into a POSSIBLE future. I really have a feeling that whatever grim futures are being portrayed this month will ulitmately be undone (for the most part) in a big crossover event next year. Still, that doesn’t mean you should enjoy this book any less.

Now THIS is Batman to me. By that I mean we see a guy so stubborn that not even a shattered spine – mended with a cybernetic prosthesis – will keep him down, let alone reasons that would see other Batmen give up for eight years after being on the job for less than one. But that’s an argument for another day.

Anyway, this all but broken Bat decides to break into a highly secure LexCorp to procure some sensitive material. If you enjoy seeing a Batman who relies on his wits and tactical skills, there’s a lot to love here because he’s at his absolute best. The taunts coming from a holographic representation of Lex Luthor were worth the price of admission alone. And did somebody say something about Batman vs. Bizarro?!

I simply can’t spoil the ending for you, but it wonderfully ties into Scott Snyder’s story “27” that was included in Detective Comics #27 earlier this year. You may also want to pay attention to Batman’s computer monitors to see what might become of various members of the Bat family down the line.

Speaking of Scott Snyder, he did co-plot this issue, but writing duties were handled by a more than capable Ray Fawkes. Art is provided by ACO, who also put forth a valiant effort and has an art style that vaguely reminds me of Paul Pope. It’s also hard to pass up a 3D cover provided by Jason Fabok. If you like Elseworlds tales, I highly recommend this book. It’s probably my favorite issue since Batman #28. Score: 8.5/10