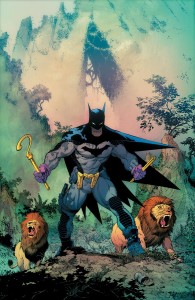 Batman:Zero Year wraps up next week, and if you were wondering “What’s next?”, writer Scott Snyder has an answer for you. It’s back to the future!

In a recent interview with Newsarama, he laid out the plans for The Dark Knight, post issue #33. 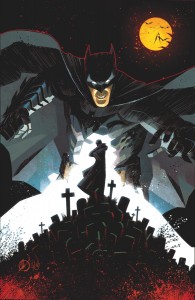 So this issue #34, with [art by] Matteo Scalera and co-written by Gerry Duggan, catches you up on a lot of the big changes that have happened in Eternal.

So there are going to be a lot of things that are shocking, that you realize… “Whoa! How did that happen?”

And you’re going to have to go see Eternal to figure out how things came to be the way they are.

Batman #35 starts a new six-issue story titled Batman: Endgame, featuring backups written by James Tynion IV and a variety of artists. Though Endgame may relate to multiple parts of the story, it doesn’t announce the end of an era. 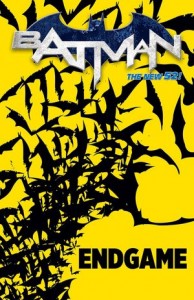 I can tell you — I mean, I don’t want to tease fans; I don’t want to hurt fans or make them worry about us leaving — it’s not meant to be an indication that this is the last story that Greg and I will do. We’ve always felt that, along the way, we would stay as long as fans really want us.

This is definitely one of those stories that I felt… we have to do this one before we die.

So there’s an element of, like, “Thank God we’re getting to do it!” You know? And I could leave the book happy having done this. And there are a couple more I really, really want to do with big bads and stuff like that. But this is definitely one on our hit list.

Snyder elaborates a little more on Endgame and other new titles in the interview, which is worth a read.

Who’s ready for next month?