“Zero Year” starts its final stretch later this month, launching the first of four issues of “Savage City.” Comic Book Resources hunted down writer Scott Snyder (like you don’t know who he is) at this past weekend’s Emerald City Comic-Con and asked the Batman scribe how he approached this story, what we can expect toward this final run and what’s next.

In reference to his feelings on creating “Zero Year”: 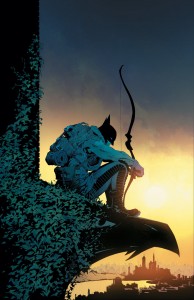 Nothing I’ve ever done, work-wise, has caused me as much anxiety as this story. I couldn’t be prouder of it, but touching that material is so nerve-wracking. Doing the Bat flying through the window in a different way, or young Bruce in the alley — you get paralyzed. It gets very terrifying. The fact that fans have been so supportive and vocally positive about this story really, really means the world to me and Greg. I know I’ve said it, but I mean it honestly, on my kids’ heads — it really means the world to us. I hope that we’ve takenfull advantage of it. I feel like we have. I think 12 issues is as much as anybody can stomach.

His relationship with artist Greg Capullo: 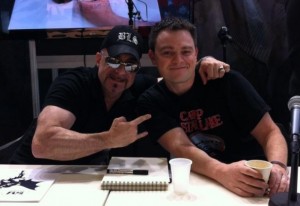 Greg Capullo was always there for me. “I’m really proud of what I’m going to do, art-wise. Don’t be afraid.” He really helped me get through it. It was tough. There were a lot of moments where I was having a lot of anxiety — “I should change this and make it less radically different than it was in ‘Year One.'” Greg really kept me honest: “That’s not how you proposed it. You’re going to do it the way you proposed it.” There was a moment when I saw the first pages from Greg — it was about in April of last year — where I saw how beautiful it looked, and I was like, “I don’t care what anybody says. I love this book.

About approaching The Riddler: 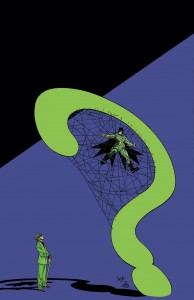 It’s been a tremendous joy writing The Riddler. He’s always been one of my favorite characters. I think the reason I was so drawn to him is because, if Batman has a superpower beyond just his incredible, almost pathological determination, it’s his detective skills. He’s the world’s great detective. So The Riddler, technically, should be the person who’s almost his great adversary. He’s been a tremendous amount of fun to write for his humor, his cleverness. The riddles are definitely a bitch. Coming up with the riddles is hard. 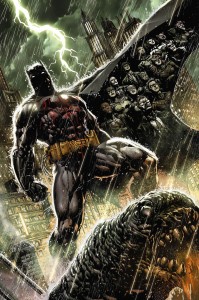 I can tell you that after “Zero Year” — I know everybody’s going to be like, “you say this all the time,” but it’s the truth — for Batman 75, we’ve been saving something really, really big. It won’t be as long as “Zero Year,” it’ll be six issues, but it’s going to completely rock Gotham, and change Batman’s status, and be, I think, hands down the biggest thing we’ve done in terms of the most transformative to the mythology and the characters. We have some very special stuff planned for the 75th that we’ve been hanging on to, and I still have quite a few stories. I still have at least that one and one more in mind that I really want to do. As long as fans will have me and Greg, we’ll stay. We’re pretty committed through about issue #50, at this point.

Wait, at least 20 more issues with these guys?! HELL YES!