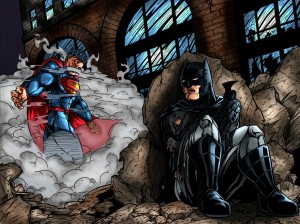 ‘Looks like Goyer’s written himself into a corner here…’

In a movie industry post Avengers, it’s not impossible to believe that an ensemble cast of characters that are larger than life can some together and be a part of an amazing story without having one overshadow the other. However, it must be done in way that the story gives enough importance to all the characters. You can’t have Batman outshine Superman, and you can’t have Superman detract from Batman.  This has to be kept in mind with apperances from other characters like Wonder Woman and possibly Aquaman or Cyborg in the mix. I suppose the movie could be called a ‘Justice League Lite’. Like a warm up before the real thing. Writer for the film David S. Goyer had this to say about writing the characters in this ambitious follow up to Man of Steel.

I always try my best to honor every character. When you’re dealing with big iconic characters, there’s a lot of fan pressure to get it right, and I respect that and admire that passion enormously. At the same time, you can’t let your creative process be too crowded by that or distracted by it. It’s not always one uniform opinion of how you should portray this character or that character. I think I’ve done a pretty good job of walking that razor’s edge. You just have to do your best and know what’s out there, but at the same time, follow your own muse.

Doing honor to the character while balancing the plot, especially for such a massive project, can not be easy. Especially when you have a big problem of making one character kind of take up the whole movie or feel small or insignificant. At the same time, you have to also put your own unique spin on the characters while still making them recognizable to leave your own mark on the movie. We’ll see more about the script as information comes out about the movie in the months to come.