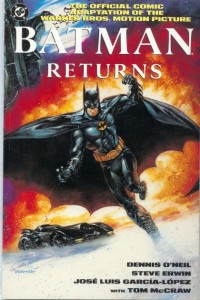 If you’re a fan of comic books and live in the Metro Detroit area, you have probably heard of Motor City Comic Con. This year marks their 25th Anniversary and will take place May 16-18 at The Suburban Collection Showplace in Novi, Michigan. It gets bigger and better every year and I highly recommend attending this year because it’s shaping up to be something really special.

For those looking to meet notable writers and artists that have worked on Batman comics, you will be pleased to know that several have already been announced. Mark Waid (Batman: Gotham by Gaslight, Kingdom Come), Bill Sinkiewicz (Batman, Detective Comics), Gerry Conway (Detective Comics, Batman Confidential), Eddy Barrows (Nightwing, Birds of Prey), Jose Luis Garcia-Lopez (Batman Returns Comic Adaptation, pictured above), and Lee Weeks (Batman Chronicles: The Gauntlet) have all been confirmed to appear.

Stay tuned to Dark Knight News for any more major announcements and expect a feature about the event to be written by me in May once the convention wraps. I also encourage everyone who cosplays as their favorite Bat Family hero or villain to put forth their best effort- you may see yourself pictured !

BvS Being Rebranded, Christopher Nolan Not Currently on the Crew List