Spoiler Alert! Images have come out for Batman/Superman #7. It picks back up where it ended with Superman and Batman fighting each other against their own will with Mongul watching the showdown in satisfaction. 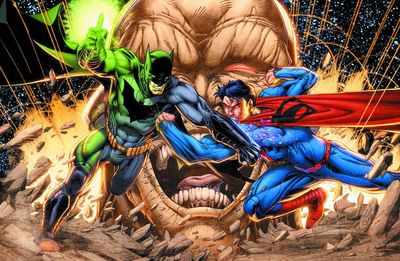 Batman versus Superman! Trapped by the Toymaster and Mongul, our heroes turn on each other! Who will save Batman and Superman if they can’t save themselves? This epic issue is presented in a special sideways format!

I have been enjoying Brett Booth, Norm Rapmund, and Andrew Dalhouse’s work especially getting to see “widescreen shots” . However Gregg Pak’s story has gotten boring in my opinion. I’m getting tired of having excuses being made in comics just to see Batman and Superman fight. It’s been done too many times. Hopefully after this we can move on to another compelling story. To see  a small preview of this issue head over to the source and click the