WB has released a clip featuring a behind the scenes look at how they captured Copperhead’s unique movements.

Though I was somewhat disappointed with the pathetic drunken march and subsequent pecking that is the Copperhead boss fight in Arkham Origins, it was still very fun to see her serpentine fighting style depicted in the game. The cut scene that introduced this new incarnation of the character really was a treat, it’s just a shame that that excuse for a boss fight followed it, but I suppose WB Montreal was simply trying to mix things up and break up the monotony a little bit. 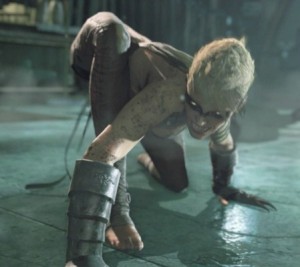 I suppose WB heard that people like me were impressed with the way her cut scene was animated, so they released this neat little behind the scenes clip that shows how the crew had to set up a very elaborate set utilized in capturing the very subtle, artful movements of a contortionist slinking through the support beams.

I wonder if they’ll treat us to anymore behind the scenes clips. I’d definitely be interested in seeing a mocap performance of the Deathstroke vs. Batman. As limited as that boss fight was, it was still pretty spectacular.

What do you think? Did you enjoy Copperhead’s cut scene? Is there anything from Arkham Origins for which you’d like a peek behind the curtain? Let me know.

Infinite Crisis Behind the Voice: Robin