DC Comics will be celebrating the Dark Knight’s 75th Anniversary next year with a myriad of specials, including a weekly Batman series titled, Batman: Eternal. DC released a Thanksgiving-themed teaser image today by Detective Comics penciler, Jason Fabok. Similar in tone to the teaser piece released several years ago at the start of Battle for the Cowl, this piece offers clues to key story moments in the upcoming saga. 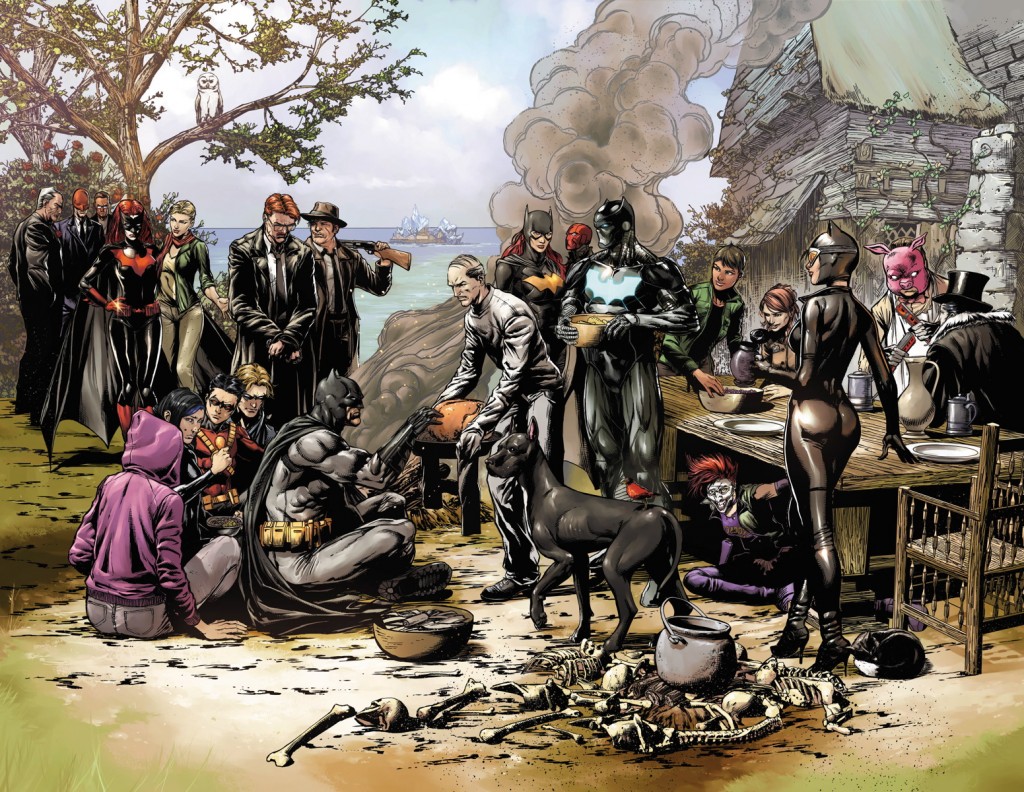 The cast (from left to right): Carmine Falcone (Is he now alive in the new 52?), Tiger Shark (from Snyder’s Black Mirror run), what looks like Bixby Rhodes aka Roadrunner (again another antagonist from Snyder’s Black Mirror), Batwoman (with glimmering wedding band), Maggie Sawyer (Batwoman’s fiancé), an owl (Court of Owls?), Gordon (hands tied), Bullock (armed and looking to the left…hmmm), purple hooded girl (gotta be Stephanie Brown), Harper Row, Tim Drake, ? (Dick Grayson as a blonde? Calvin Rose?), Batman (inspecting a dead bird…hmmmm), Alfred (in a strait jacket), Titus with a robin on his back (alert and looking to the left…the return of Damian?), Batgirl, Red Hood, Batwing, Tam Fox, Joker’s Daughter (hiding under the table), Vicki Vale (just an educated guess based on the fact that she’s wearing a press pass), Catwoman, Alfred (the cat), Professor Pyg (with a model train) and Penguin.
There are other clues in the image as well. One can see the Iceberg Lounge in the background, ivy growing on the cottage, the skeletal remains by the pot (small bones, like those of a child, by a pit… I mean pot and surrounded by things Damian loved in life), where the characters are looking and the fact that those sitting behind Batman are all Robins except for Harper (I know Steph doesn’t count in the New 52, but it’s an interesting placement). These are the things I’ve picked up. What do you guys and gals think? See anything I missed, picking up on any clues? What does it all mean?
Batman: Eternal kicks off next year.
Source: Newsarama
75th AnniversaryalfredbatmanBatman WeeklyBatman: EternalBatwingbatwomanBob KaneBullockcabaleiro artcarlos cabaleirocomicdamian waynedark knightdark knight newsDC ComicsDC Entertainmentdick graysondknFalconeGordonharper rowJames Tynion IVJason Fabokjoker's daughtermaggie sawyerNightwingpreviewred hoodred robinRobinrobinsScott Snyderstephanie brownteaserThanksgiving
Share 0 FacebookTwitterPinterestEmail

President Obama Gives Thanks to Batkid