Synopsis: After having his face sliced off, The Joker makes his horrifying return to Gotham City in this epic from Batman issues #13-17 that shook The Dark Knight to his core! But even for a man who’s committed a lifetime of murder, he’s more dangerous than ever before. How can Batman protect his city and those he’s closest to?

If you’re reading this, then you’ve read Death of the Family. I don’t need to rehash the plot for you and convince you to read one of the greatest Joker stories of all time, but instead, I’m here to let you know you should shed out your hard-earned dollars on the Hardcover collection of the 5-issue story. 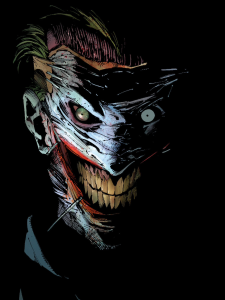 (This face alone should convince you)

It’s everything I wanted, and more. When it was first announced writer Scott Snyder and artist Greg Capullo would be tackling a story with the Clown Prince of Crime, I expected something great, but not amazing. It’s an honest-to-god horror story with  Joker going down as one of the creepiest characters in history. Just look at his return…

It only gets crazier from there! We go from Alfred being taken, to a group of cops being killed in the mayor’s office, to a dinner scene that you would swear was influenced by The Texas Chainsaw Massacre. 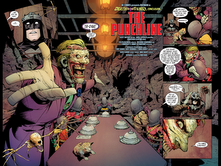 Story: The twists, dialogue and chaos are some of the best work ever done by Snyder. This story is everything a Joker story should be.

Book:This new hardcover features an acetate dust jacket showing the face of the Joker as it appeared on the die-cut covers of the “Death of the Family” comics – and under that dust jacket lies the horror… the Joker’s skinless skull. Creepy!

Extras: Sadly, not much. We get a few pages of Capullo sketches and that’s it. I would have liked some personal insight from Snyder on this one (his inspiration, creating the story, researching the history of the Batman/Joker relationship, etc. ).

If you ever look to double-dip on a Joker story, this is the one to pick. It will put a smile on your face.

Rumor: Nightwing in Batman Vs. Superman?