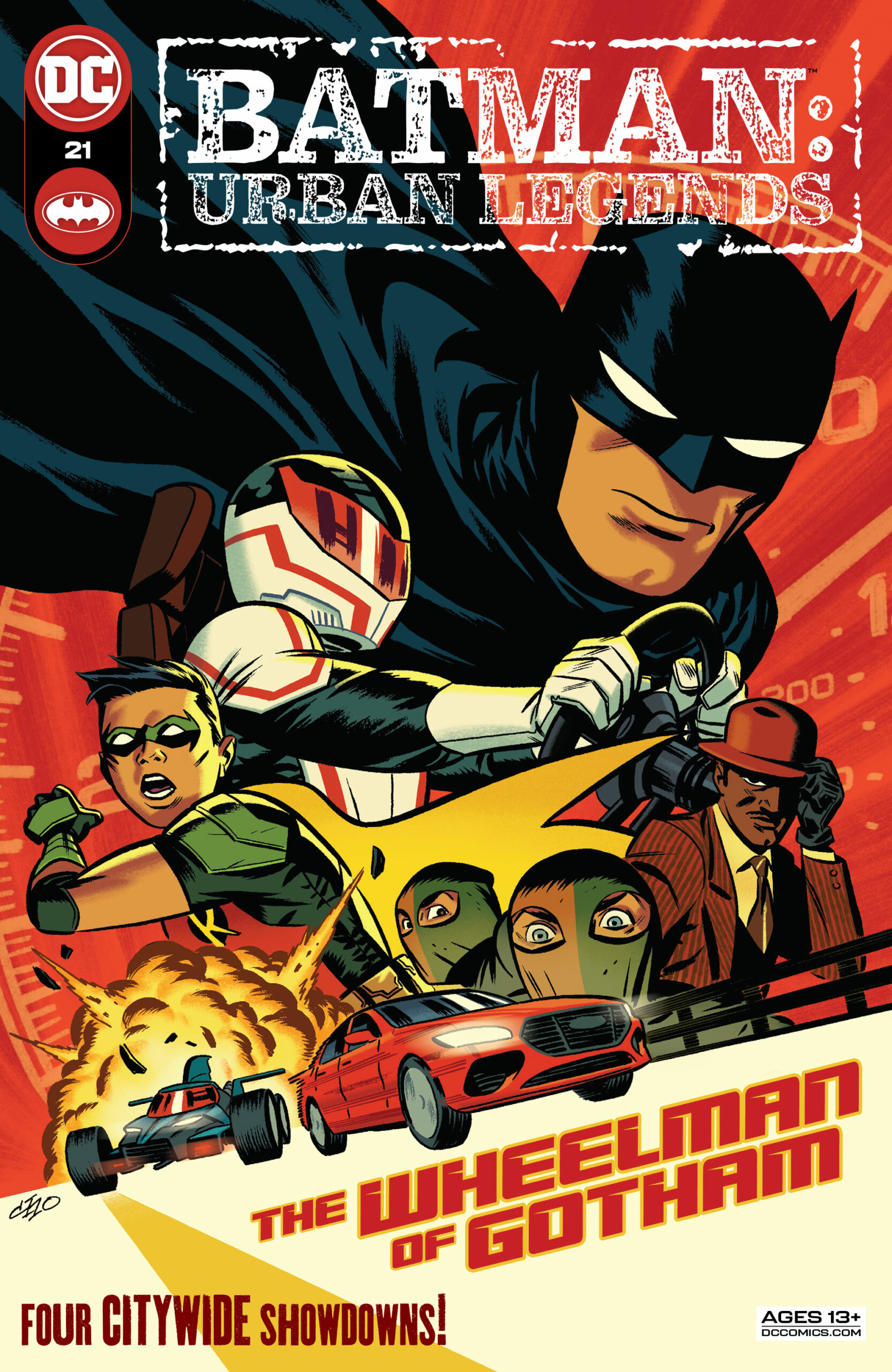 Batman: Urban Legends #21 felt like a series of plays that were shown on an open theater night. Some highs, some lows, and a whole lot of range. Take your seat, people, you’re in for an emotional roller coaster.

“The Wheelman of Gotham”

This was the story that just had to start the night, a fun exciting romp about a getaway driver. The best of the best, uncatchable… even for the Batmobile? So, we have Batman and Robin, with a little help from a speedster trying to catch the world’s fastest getaway driver. How are they so good? How are they so fast? Is it skill? Is it magic? Or could it be a force of nature? (wink, wink). 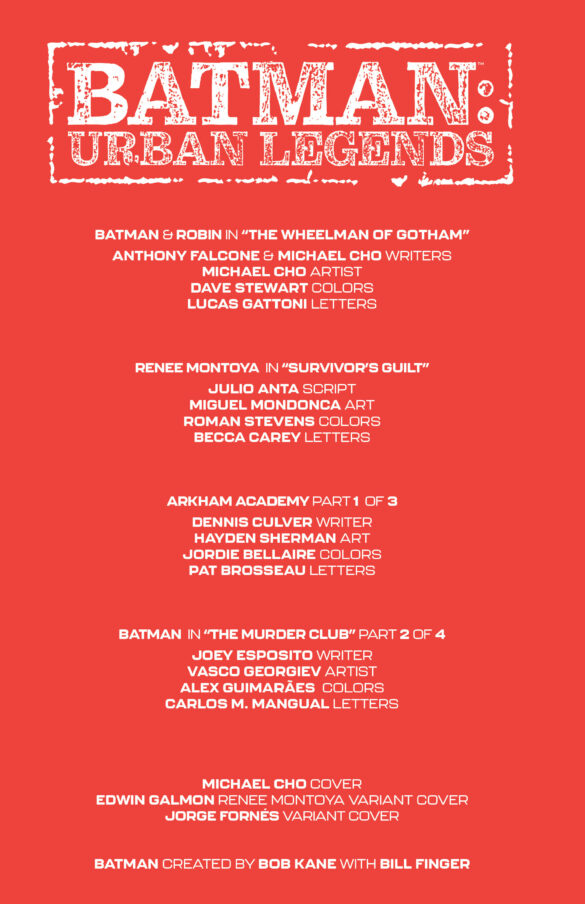 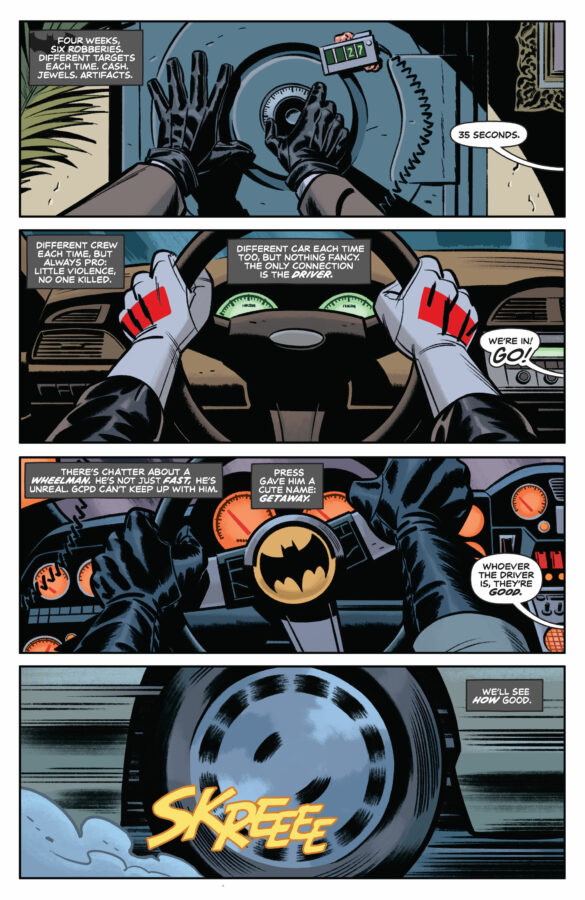 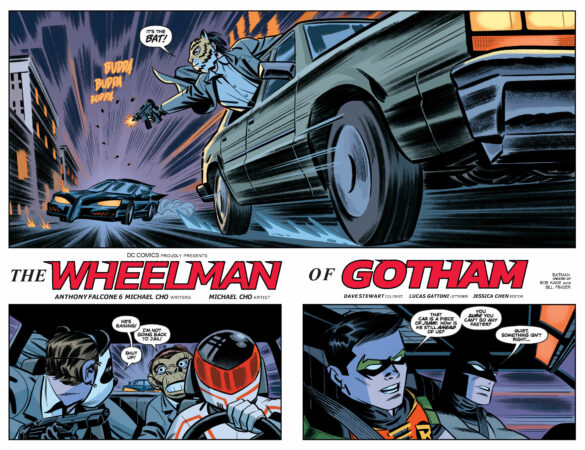 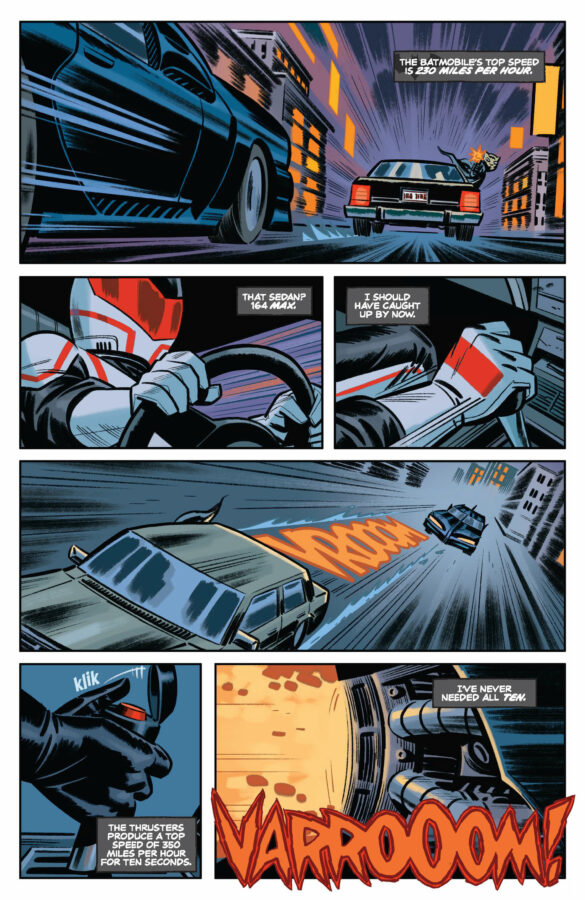 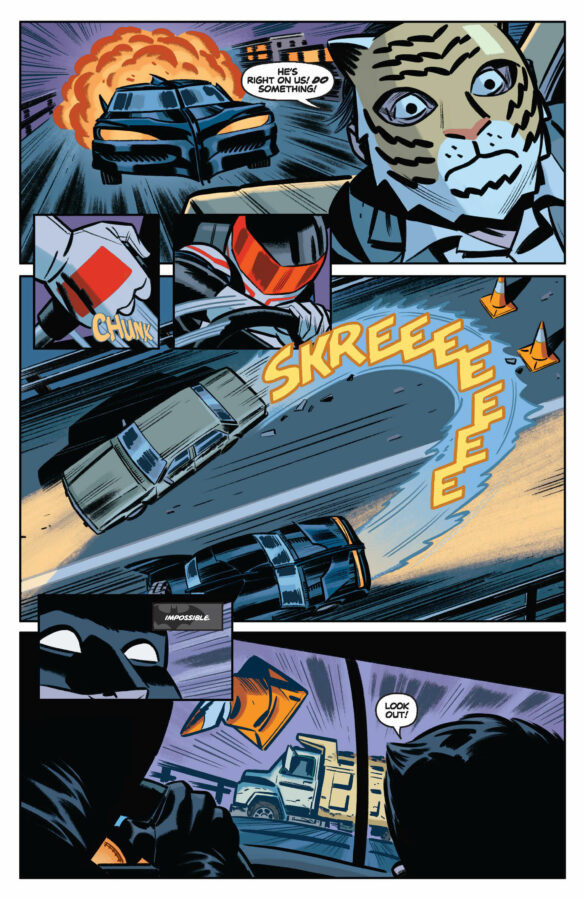 I couldn’t tell which Robin this was, Tim or Damian, guess I’ll never know. I think it was Damian, but he seemed way too happy. We’re treated to some great writing, if not a little ambiguous. The art was fun, although I would’ve liked a smidge more detail, just so I could identify characters a little more.

There was a lot of potential to this story and I hope we meet ‘Getaway’ again, as this felt like an intro to the character. We’re missing an origin though, so I’d like to know more.

As the opener of the issue, it certainly engaged me and got my attention.

Now that everyone’s warmed up, we arrive at the story that they’ll all be talking about. This story is about Renee Montoya, just after she was offered the position of Commissioner. It’s one of the best short stories of the entire run of Batman: Urban Legends, which is high praise, indeed.

It’s all about the effect that the police have on their community and the driving force of the cops who walk the beat. This story shows that some police are just arresting people to meet their monthly quota, with no empathy, and no compassion for how that could affect someone’s life. This was a truly powerful story.

It makes me love Renee Montoya more as a police officer than I do as The Question. With Batwoman, being her friend and confidant during this tale, it really hit hard. When you read this story, I believe that it will change your outlook on Law enforcement in society. “Survivors Guilt” gets a 10/10. I would’ve given it a standing ovation if I were watching at the local theater.

I’m not often left speechless by a comic, but this one was a sure-fire winner. I really hope we get to see more of this version of Montoya going forward in Gotham.

After any high, there has to be a lull, a low point, or a real stinker. Sadly, for me, this story was all of the above. It felt like this was written for the people who can’t wait for the CW Gotham Knights TV show (no one). It’s about people who are taken to the youth section of Arkham, as they have connections to Real Gotham villains.

Everything about this tale hurt me; reading it, looking at it (the art isn’t my cup of tea, not bad, just not for me), and I couldn’t get behind any of the characters. I was honestly hoping that Arkham Asylum was going to be used for better things after the events of A-day/ The Tower, alas, a youth club for innocent Super Villains’ kids. Genius.

Maybe the youngsters of today will enjoy it, maybe anyone born since the year 2000 will read it and think it’s a ‘mood’. For me though, a grumpy thirty-something. This story doesn’t deserve to be in this issue.

The grand finale isn’t as good as Montoya’s story, but better than the other two. Last issue set up a huge reveal at the end. Thomas and Martha alive? Bruce doesn’t believe it, we don’t believe it, and no one else is going to believe it. Unless we’re in Flashpoint world, those two have been dead since 10:48 pm many, many, moons ago. Yet here they are and the World’s greatest detective has to find out how and why.

This story started and was framed as a detective tale; rich people were being murdered, driven mad, with their legacies tainted.  We see a side to Bruce in this story that’s rarely shown. His parents are back but he sees the bat signal. Of course, this is Batman, so he runs to it. People are in danger, lives are at stake and this story shows us that he knows he’s needed. 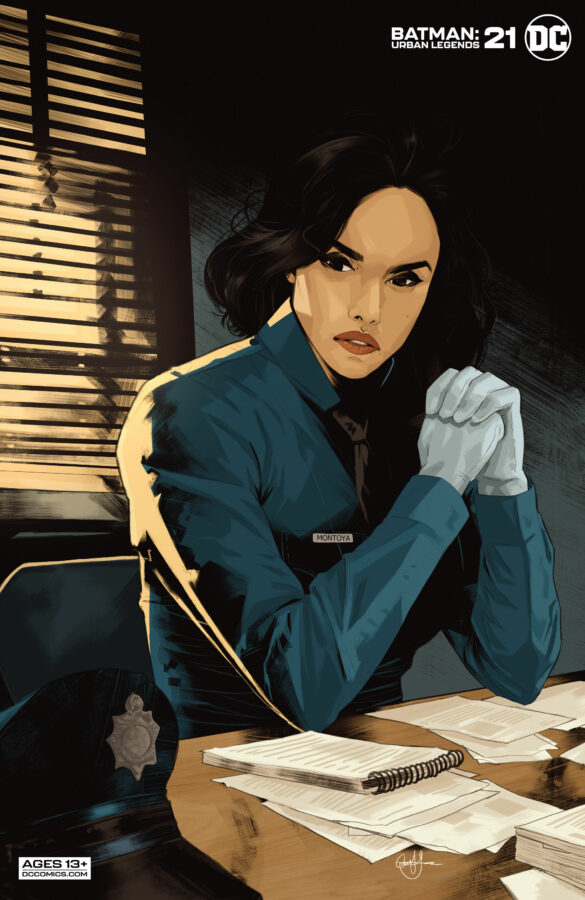 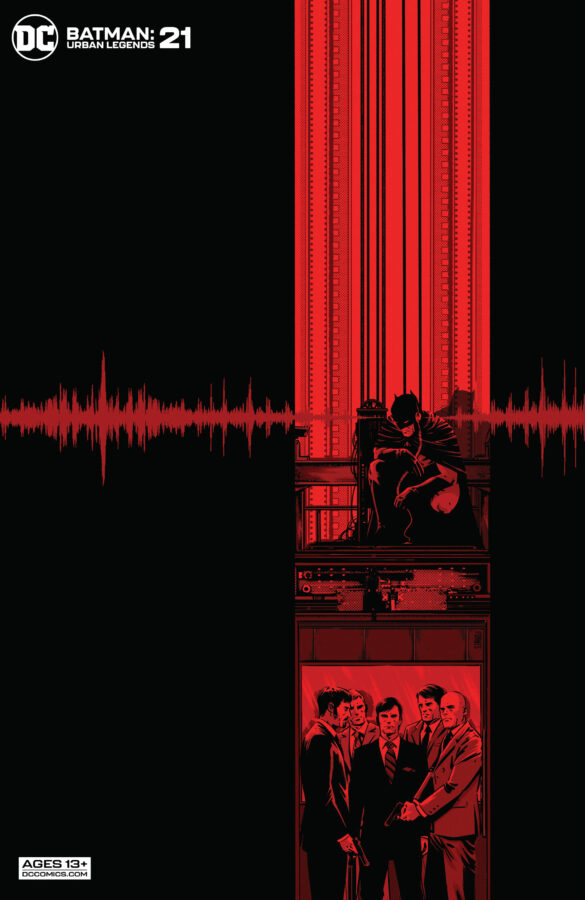 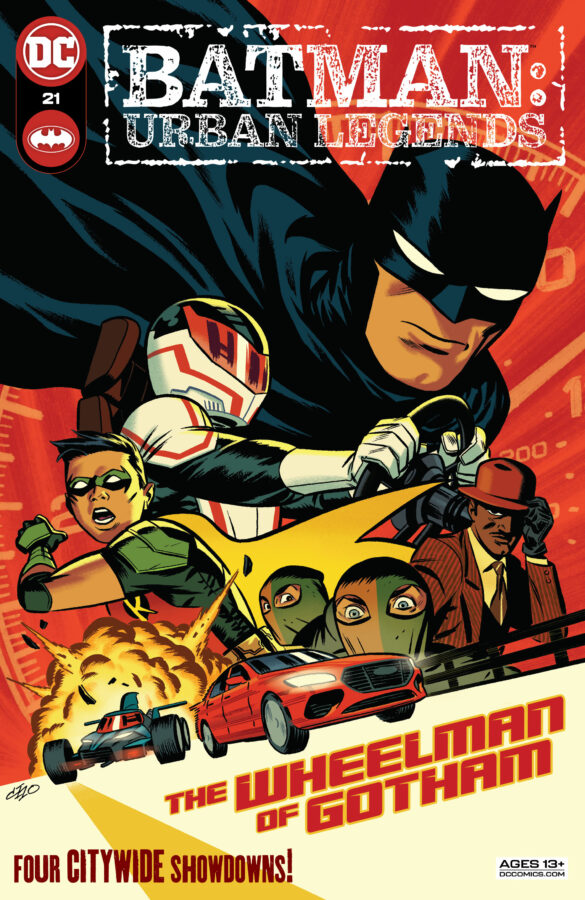 His parents, the reason why he does what he does have seemingly returned; an event beyond his wildest desires, hopes, and dreams. I loved reading that, even though heartbreaking. Also a character development high for Damian Wayne. Written to perfection. He has a reason to stay, yet he still goes.

It breaks my heart that this story isn’t set in the main continuity, for it would add a lot of new depth to some of our favorite characters.

Batman: Urban Legends #21 is one and a half stories away from being a perfect issue. For that reason as I sit here judging other people’s hard work, I give it an 8 out of 10. Bravo to some, keep trying to others. I’m looking forward to the next issue… it has a lot to live up to.