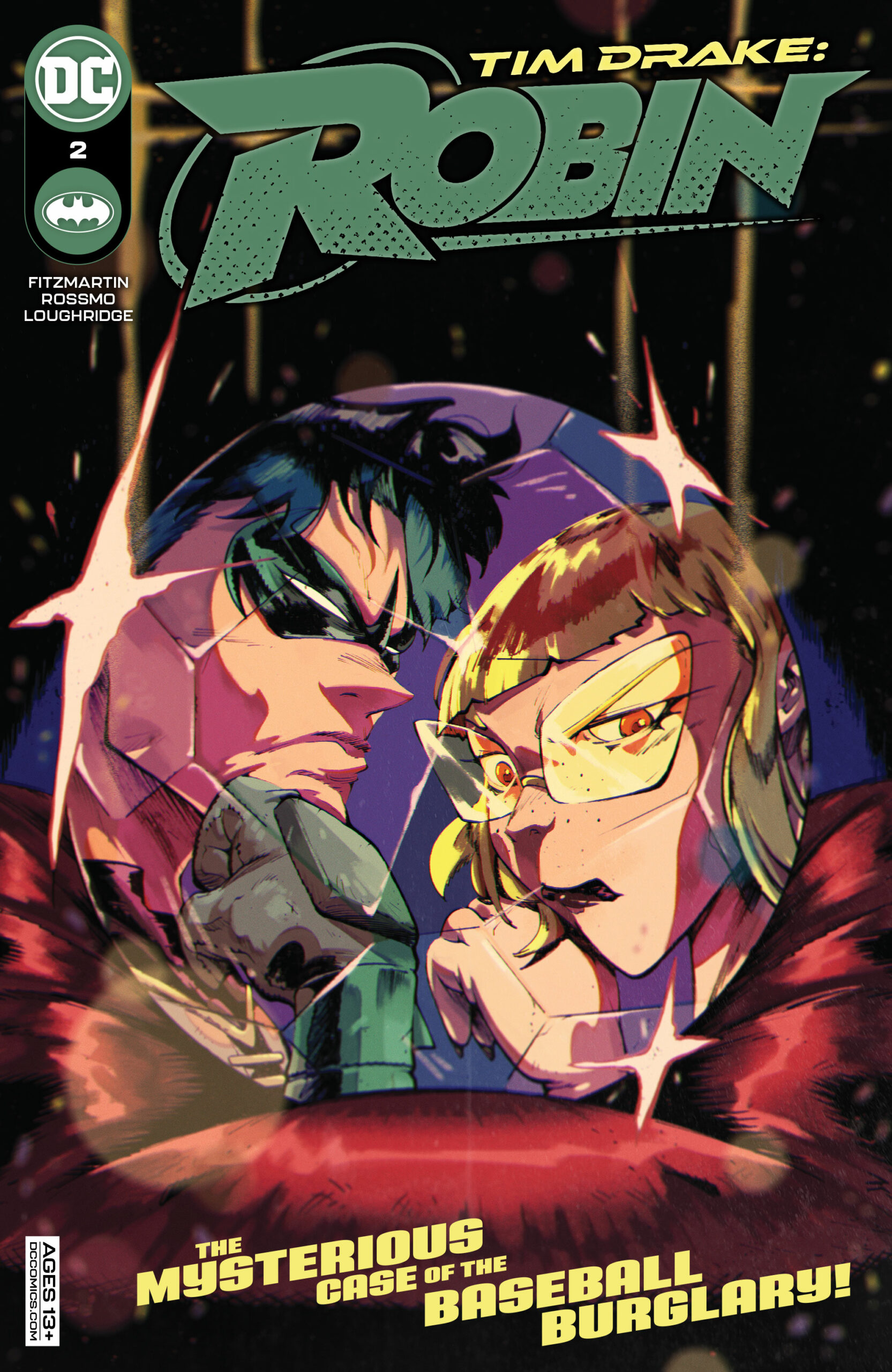 Tim Drake: Robin #2 has some work to do. If you read the first issue or checked out our review, you’ll know that things got off to a solid start, managing a juggling act of conveying a whole new status quo for our lead, whilst squeezing in the beginnings of a new threat and a crime story too.

The second issue of any series has its own challenges; there’s fun to be had in introductions but that’s over, we’ve been won over/intrigued enough to return, and now we want to see what this series is all about. 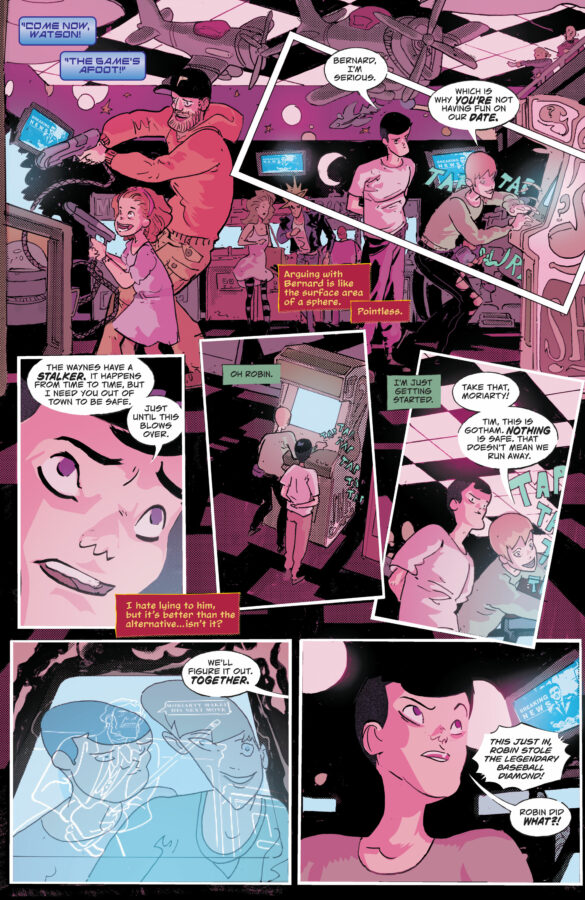 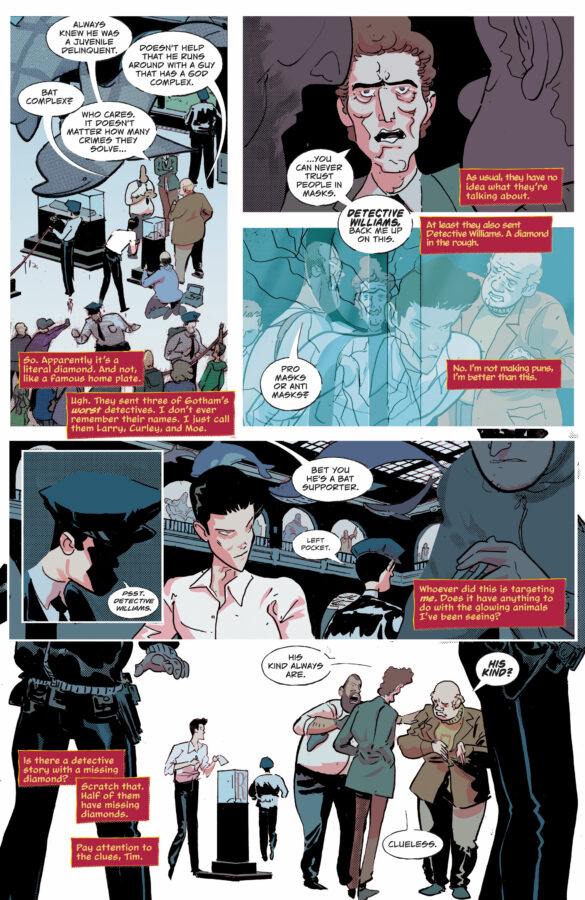 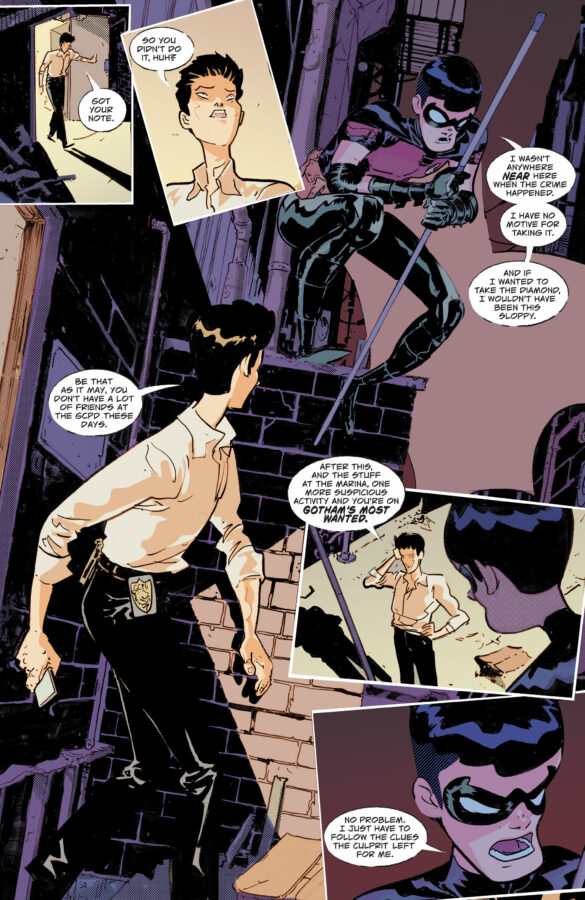 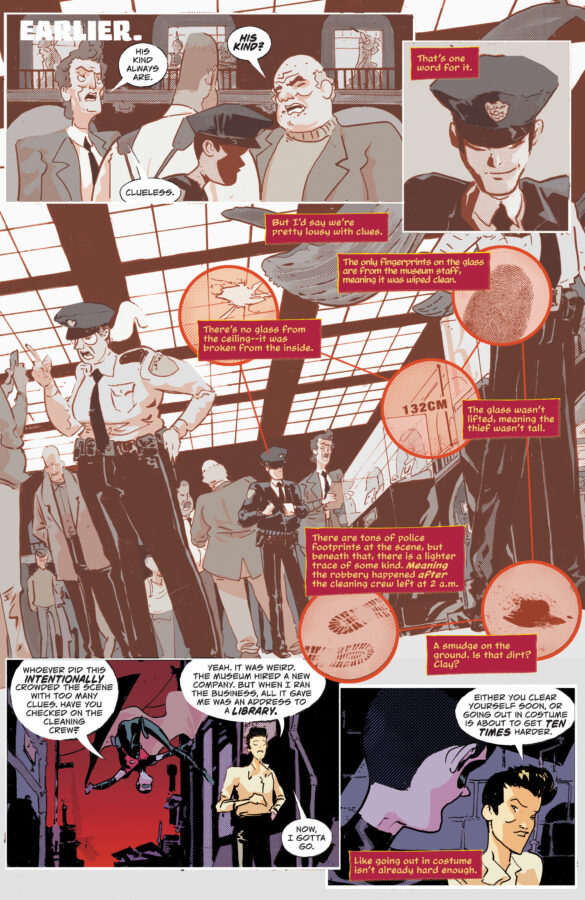 Issue two dutifully understands the mission and spends just one page with Tim and his boyfriend Bernard on a date, before throwing him into a new crime scene. This is good, not because Tim’s private life is dull, but because the ongoing plot needs to take precedence. What we discover is that the light-hearted touch to the previous issue prevails during the crime story; three of the detectives on the case – identified by Tim merely as Larry, Curly, and Moe of The Three Stooges – simply stand around moaning about superheroes. The deductions Tim makes from the clues that only he has spotted seem rushed and after three pages we’re back to Tim and Bernard’s date.

The page showing three panels of Robin and his sidekick Sparrow dressed as three different classic detectives as they research the case encapsulates the tone of the comic. The fact that one of those classic detectives is the Scooby-Doo gang is the most telling of all. There’s nothing wrong with this, of course, as Tim Drake isn’t an adult. It makes sense for his series to reflect youthful fun and energy, but I know it won’t be for everybody.

It does mean that illustrator Riley Rossmo is completely at home here, playing up melodrama that includes near-hysterical middle-aged women, the discovery of a dead body, and a comical dash from the police, whilst giving characters a loose-limbed over-expressiveness. He still manages to give Robin a suitably iconic action pose when necessary, though. There’s also energy conveyed in the jaunty panel layouts, and Lee Loughridge’s colors keep a tonal lightness, with pale versions of blues, purples, and orange.

Writer Meghan Fitzmartin is building an intriguing enough plot around a mysterious villain, while deliberately leaving clues like breadcrumbs for Robin. The negative of this is that it also manages to put Tim at the top of the GCPD’s wanted list. Fitzmartin’s also increasing the cast list.

I do feel that Tim’s narration in the description boxes is overused, as there’s a fine line between adding detail to what’s going on and over-explaining things. They particularly get in the way in a scene where Tim’s talking to Bernard; surely ther’s a time to let the dialogue do the talking, so to speak. 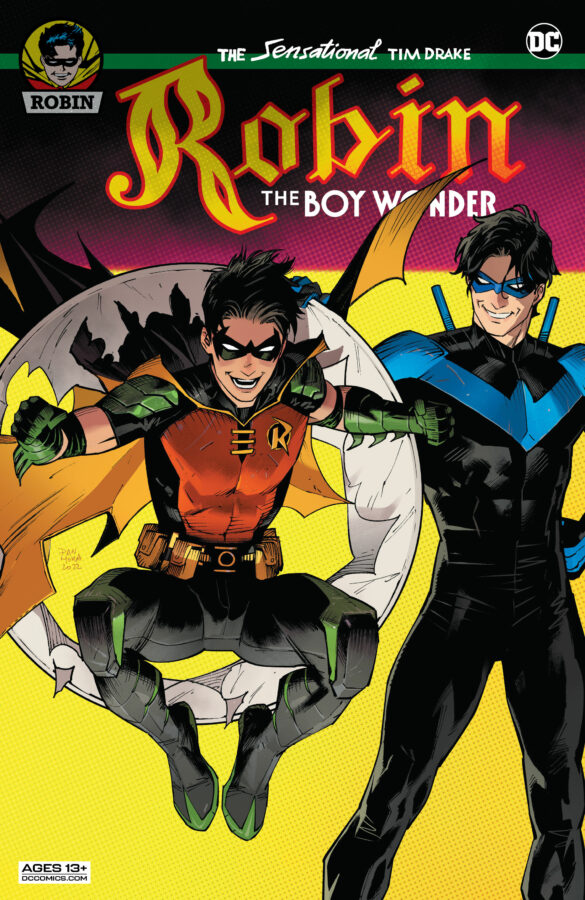 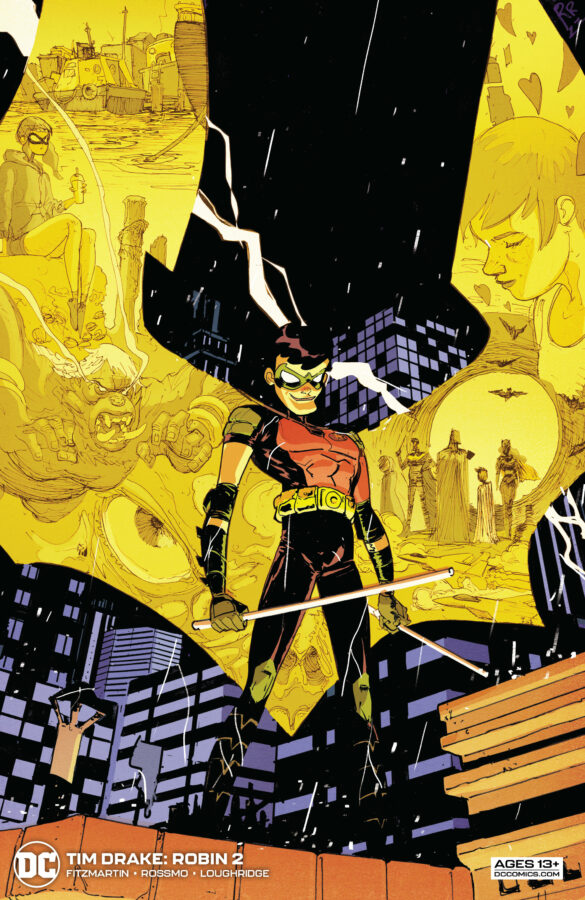 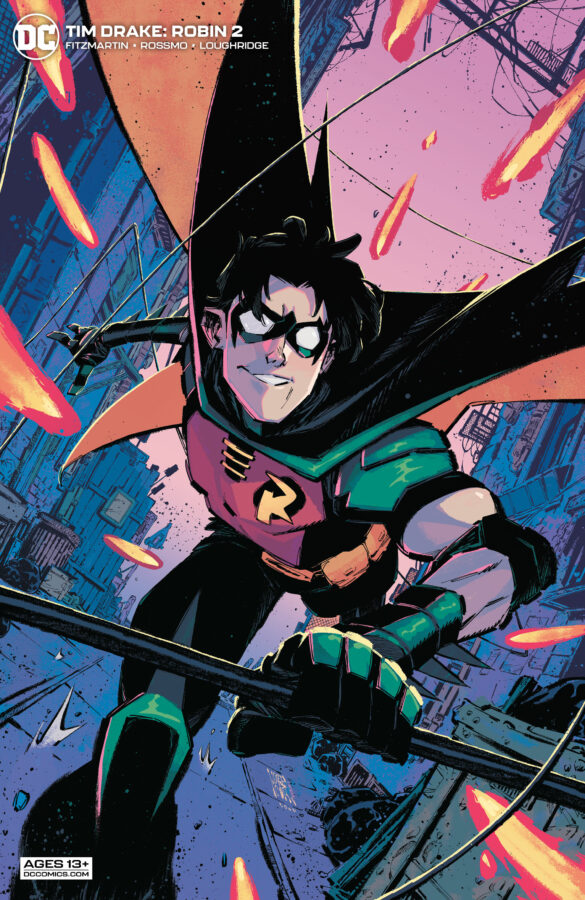 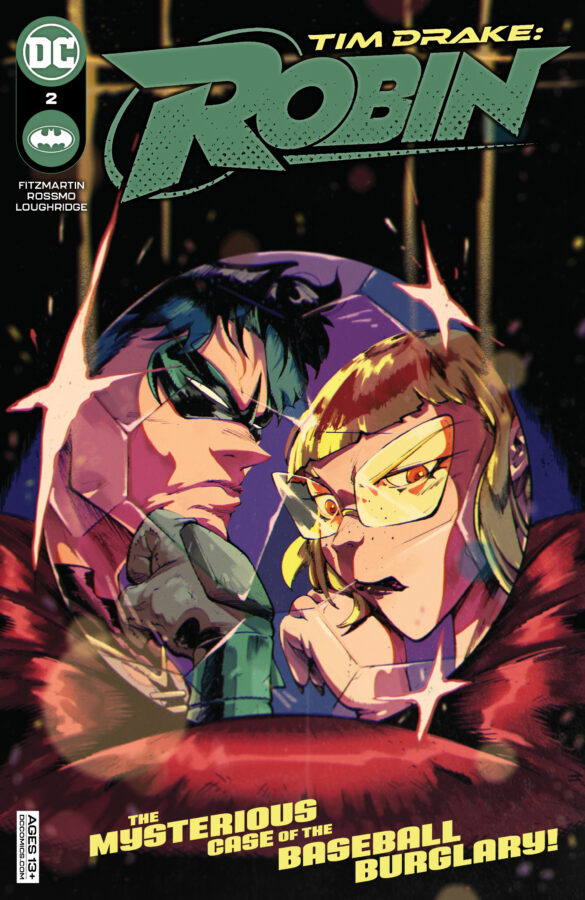 The scene also draws attention to Tim’s shortcomings. When compared with Bernard’s level of maturity, Tim seems painfully naïve and insecure. It’s understandable of course, given Tim’s history, and Fitzmartin is making a valid parallel between coming to terms with identity, whether it be sexual identity or a superhero persona. Of course, while it’s realistic, it can be frustrating to see what could be perceived as a weakness, in the main protagonist of a story.

Tim Drake: Robin #2 has a lot of youthful energy to it, but sometimes it feels a little too young. Tim’s in danger of coming across as someone new to the superhero role. However, the artwork’s charming, the momentum of the plot is growing and it ends on a page that begs to be followed up on.