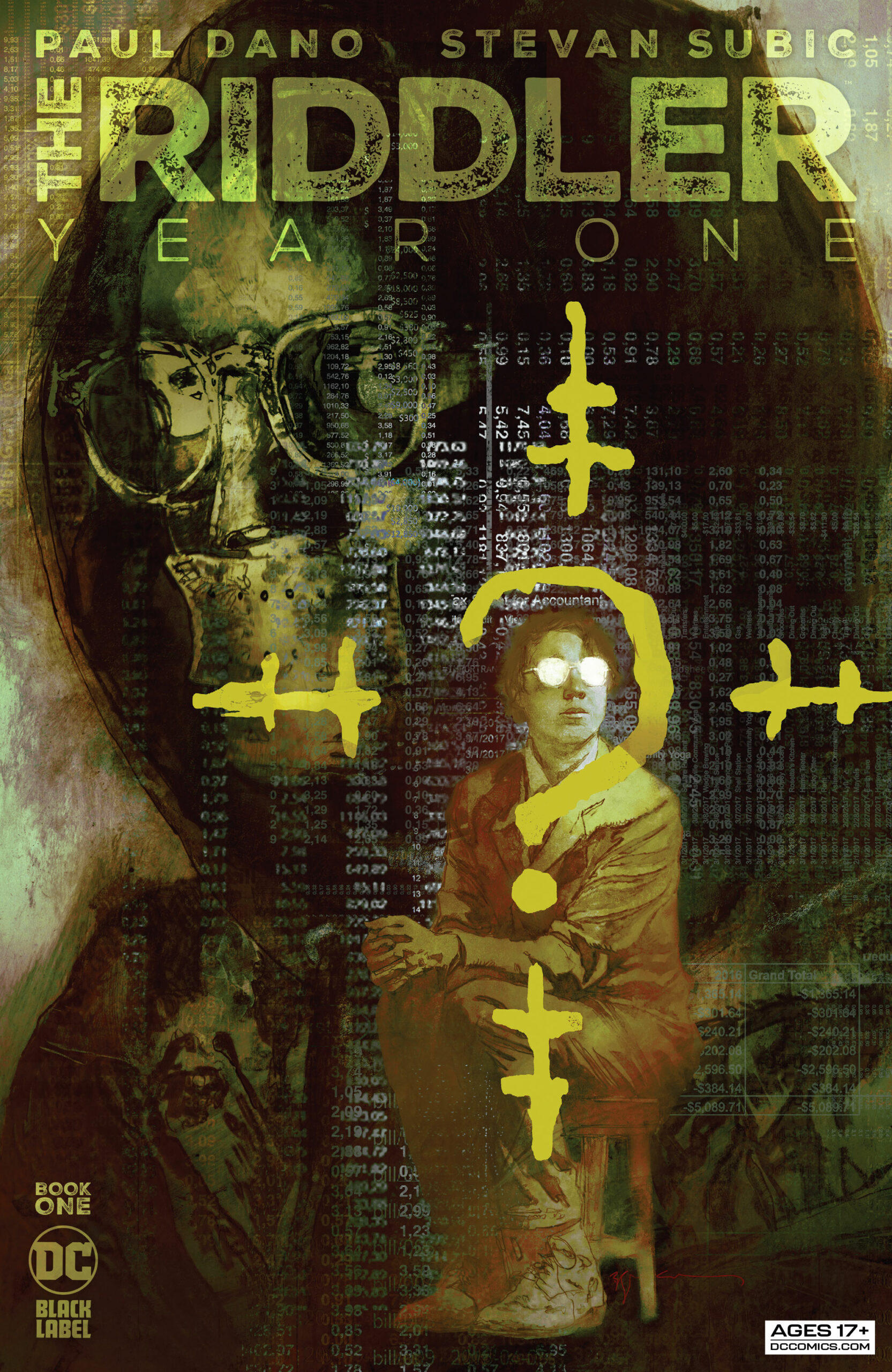 Occasionally, a new comic launch almost sells itself, due to the interest it generates. The Riddler: Year One #1 is a perfect example of this. The series is written by Paul Dano, who played the character in the recent movie The Batman. DC had me there already, when they announced the series, back in March. The question wasn’t so much if I was curious enough to take a look, it was more like, what does Dano have to say about the Riddler, and how proficient will he be at writing a comic?

The Riddler: Year One #1

Paul Dano is something of a method actor. He likes to research his role thoroughly and think carefully about the character’s back story. For the role of the Riddler he also read a lot of comics; Batman comics, non-Batman comics, books about comics and listened to podcasts about comics. One day during production of The Batman, Dano was sat talking to the movie’s writer/director Matt Reeves about the images he had created in his mind when thinking about how Edward Nashton became the Riddler. Reeves was so impressed he engineered a meeting between Dano and DC to talk about turning those images into a comic. 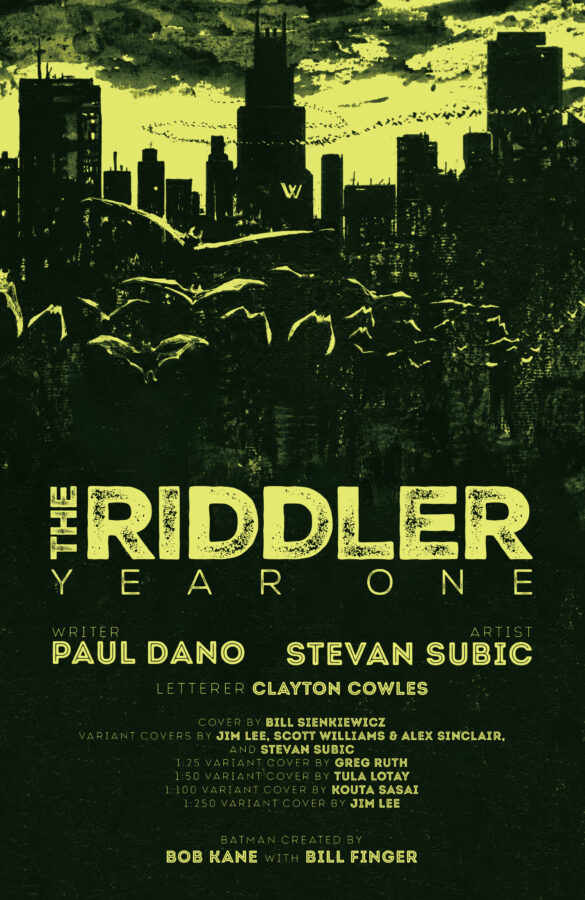 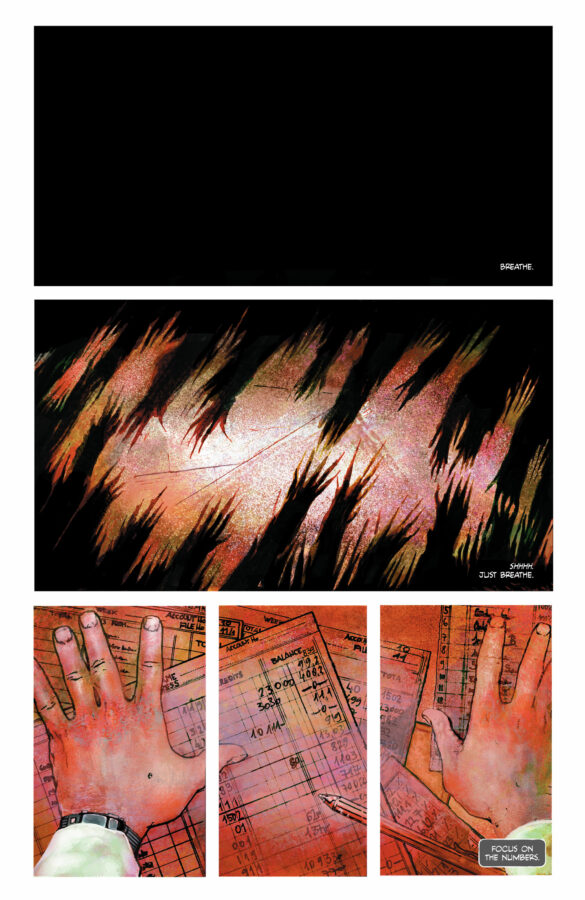 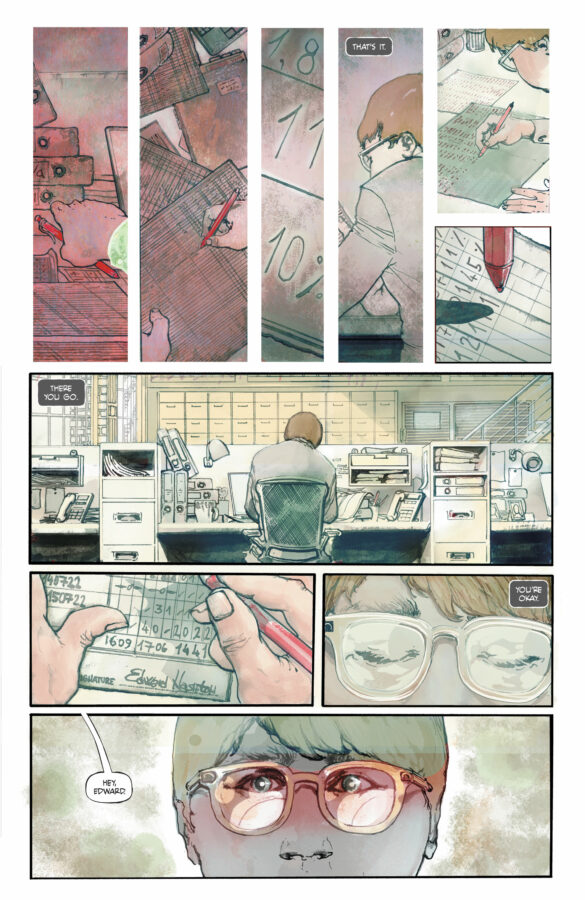 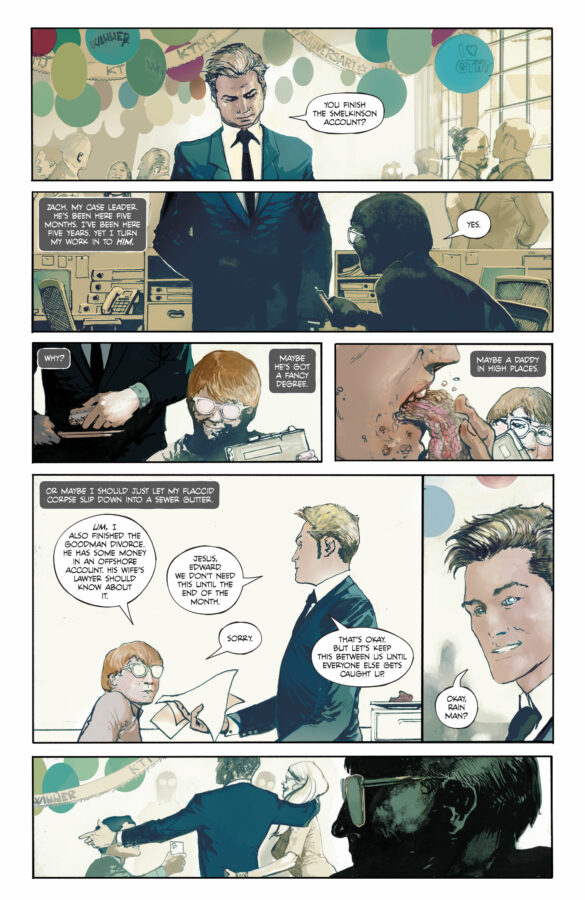 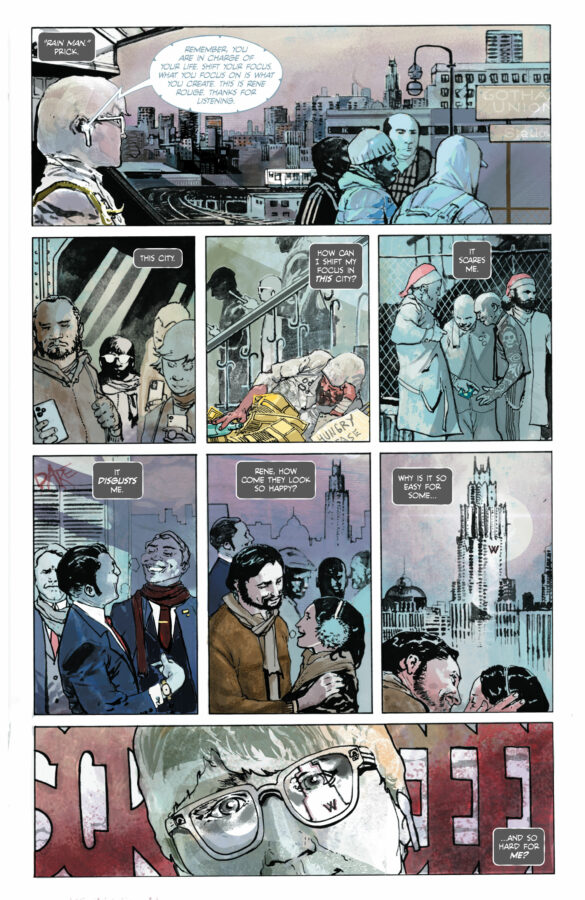 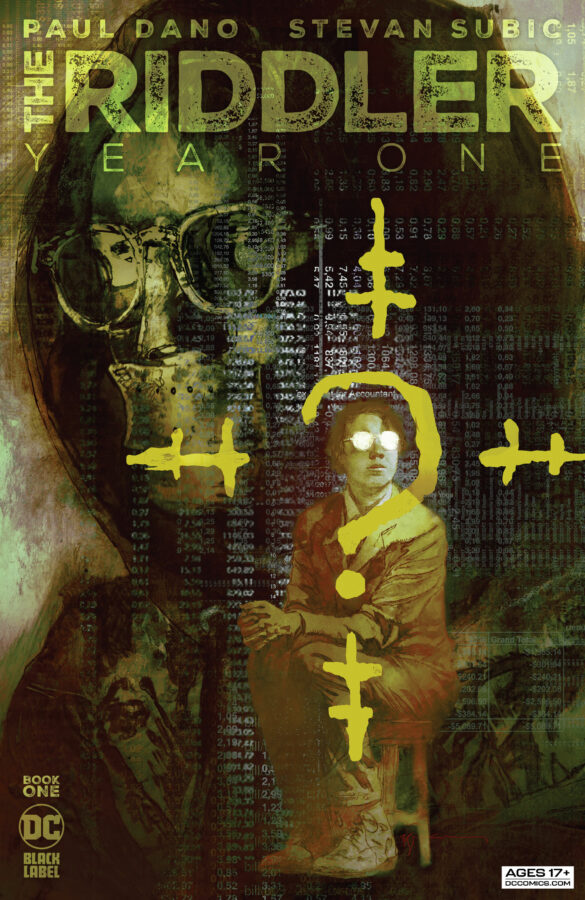 This means that Dano came to the project not just with a rigorously thought-out idea of how the Riddler should be as a character, but he’d explored the comics medium so thoroughly that he understood the importance of images and telling the story in a visual way. This respect for both character and the medium shine through in this first issue.

As you might expect, from his close involvement in the character, Dano writes Edward Nashton sympathetically. He’s shy, neurotic, and is good at his job, analyzing accounts for financial irregularities. He’s also met with rudeness when he tries to be nice on the train and is taken advantage of by his boss. However, there’s clearly another side to him. Through the character’s interior monologue, we learn how Nashton is trying to keep a depressive side of his nature at bay. This is where Dano shows maturity as a writer because he allows the art to convey the darkness to Nashton’s character.

In fact, considering Paul Dano is the big name here, illustrator Stevan Subic, with his first work for a US publisher, is just as much a star of the show. Evoking a feeling of Bill Sienkiewicz with his watercolor and expressionistic style (is it a coincidence that Sienkiewicz has contributed a variant cover?) there’s so much to admire here.

The switches in style from, for example, the clear linework in a courtroom scene, to the looser expressionism for when we’re seeing the world through Edward Nashton’s eyes. The glorious single panels, such as an image of Gotham at night, with bats flying over rough waters lashing against the harbor. Or the image of Nashton kneeling by two unconscious bodies, evoking the memory of the young Bruce Wayne at the bodies of his parents. The claustrophobic close-ups and the sickly-looking color choices for the office. Subic even manages to capture Paul Dano’s likeness without looking like he’s copied stills from the movie. 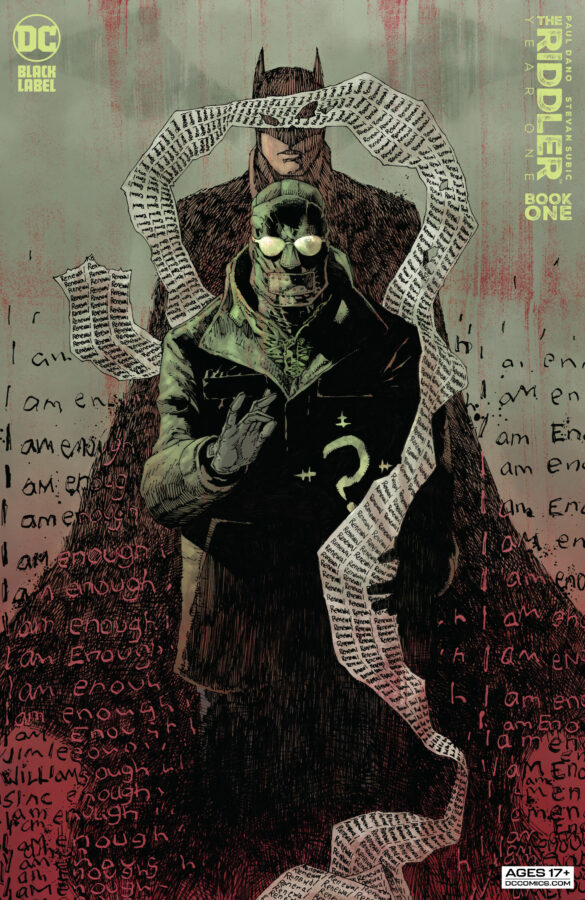 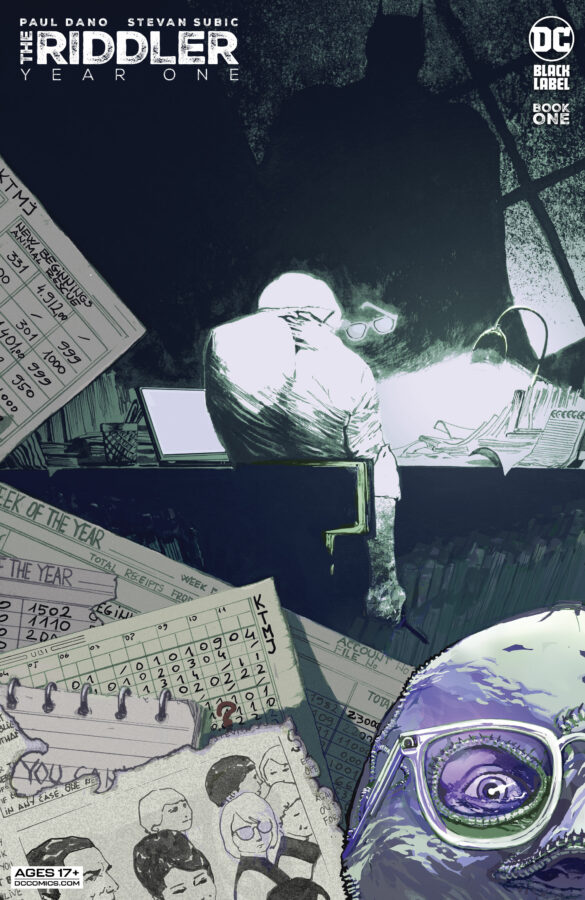 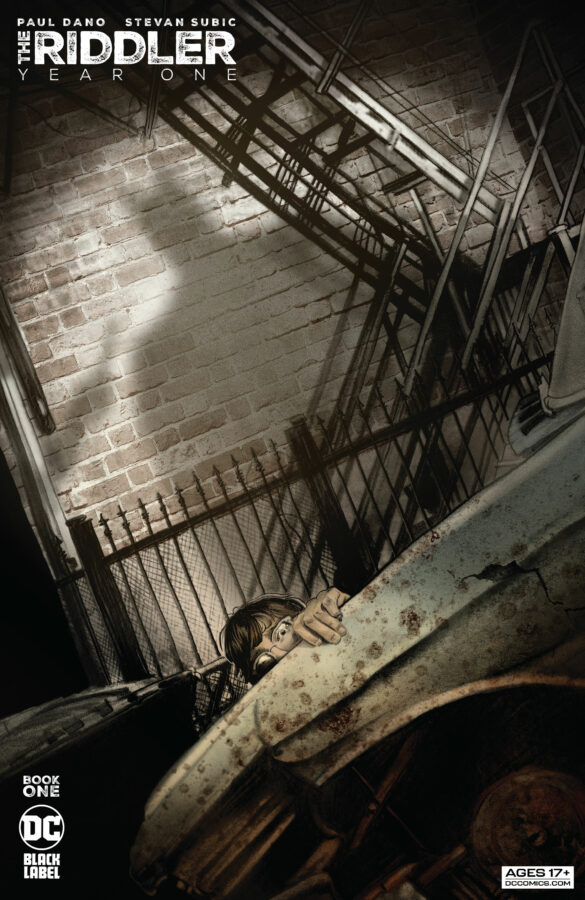 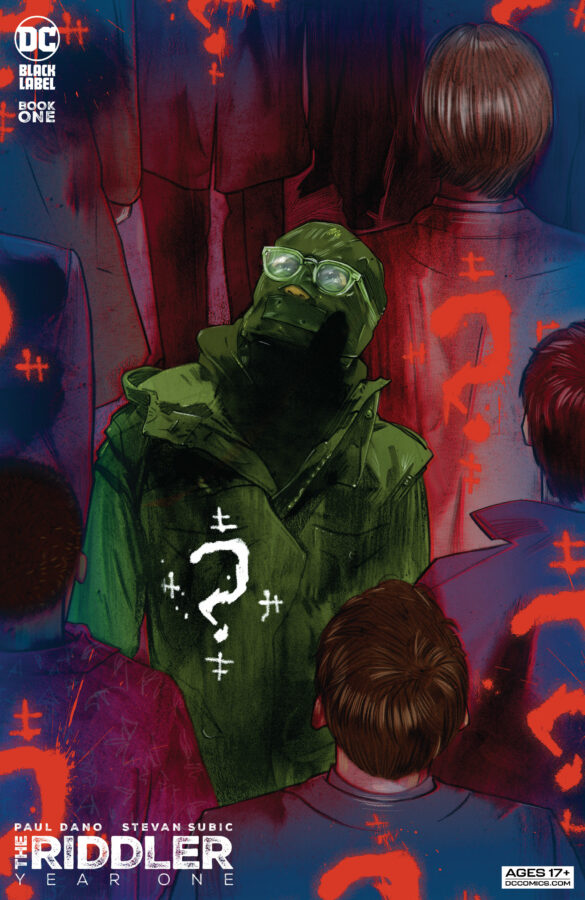 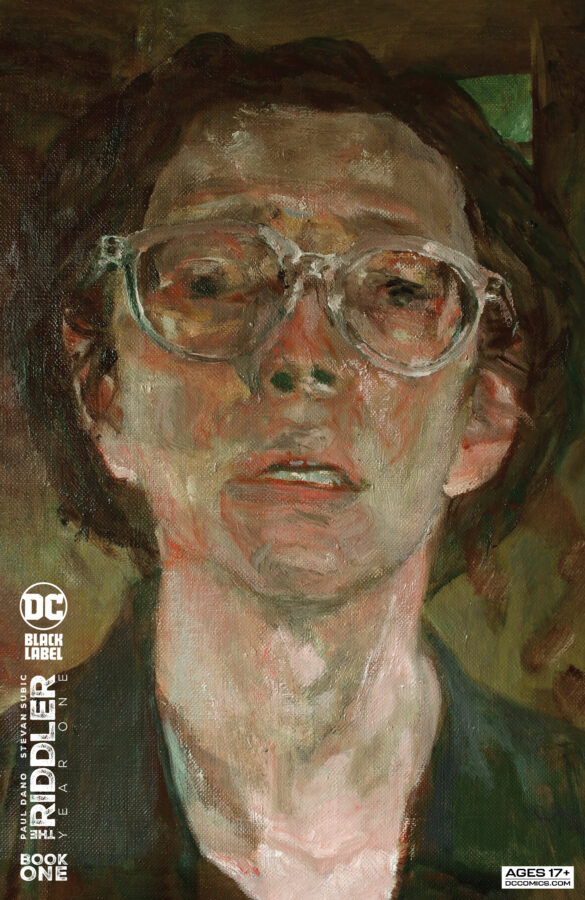 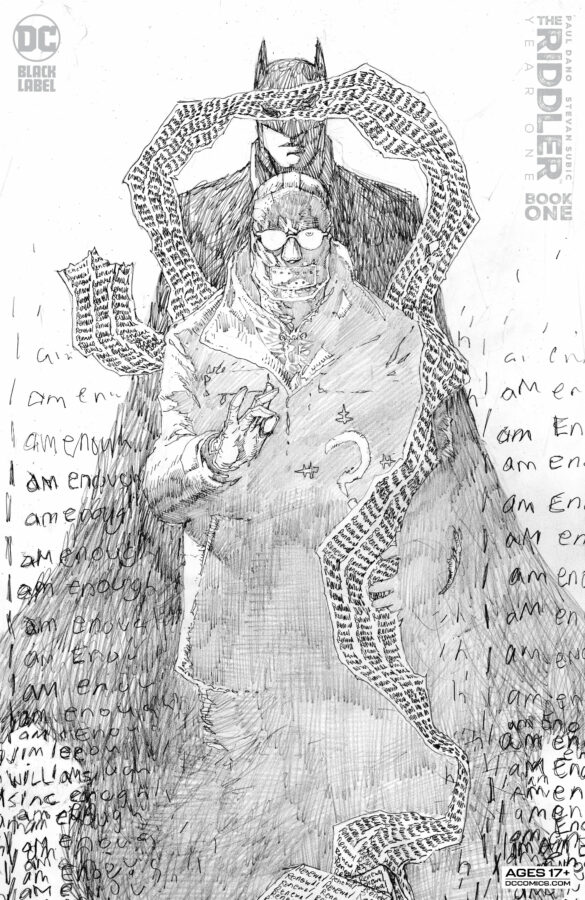 There’s an interesting interview with Paul Dano about his creative process. Comics usually work best when the writer and artist develop a harmonized relationship that brings out the best in the story. On very rare occasions an illustrator will sign a panel with their name, so it’s interesting that the final, brilliantly realized, and rather chilling image on the last page of this issue is signed with the names of both Paul Dano and Stevan Subic.

Although a prequel to The Batman, The Riddler: Year One #1 is closer in spirit to the Joker movie, as it also depicts a troubled individual reacting badly to the bad side of Gotham. Although it’s essentially a character study, writer Paul Dano has shown considerable restraint in his writing by allowing illustrator Stevan Subic to present the world through Edward Nashton’s eyes, and this has elevated the storytelling with stirring imagery.

Published under DC’s mature-rated Black Label imprint, this six-issue series has got off to an extremely promising start.

DC have created a trailer for this issue, which features a conversation with Paul Dano and matt reeves. Watch out for it, later today on Dark Knight News!