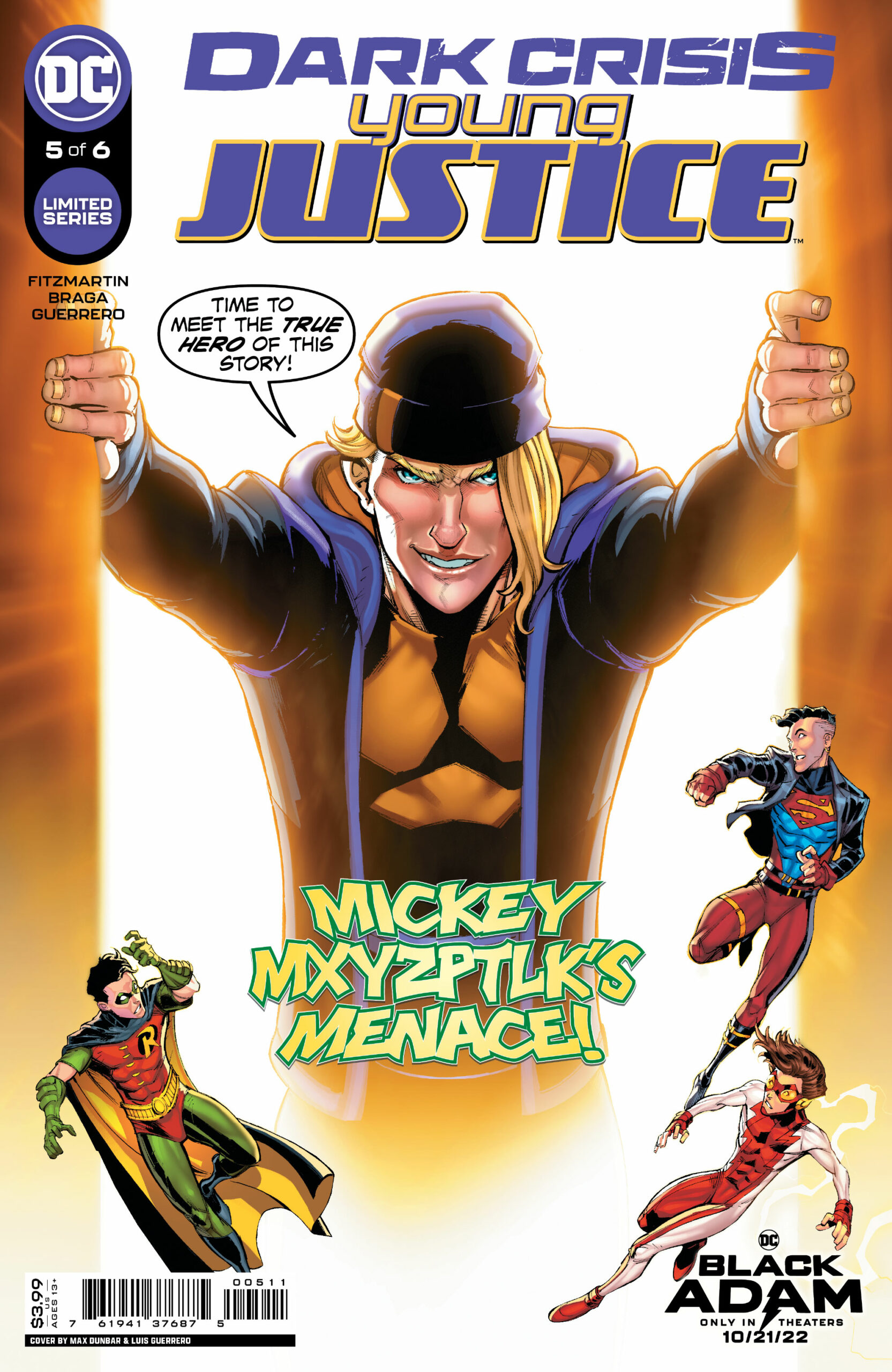 After months of waiting, we finally learn who’s responsible for the disappearance of Superboy, Robin, and Impulse: Mickey Mxyzptlk. Yes – the son of Mr. Mxyzptlk is responsible for kidnapping the Young Justice boys! 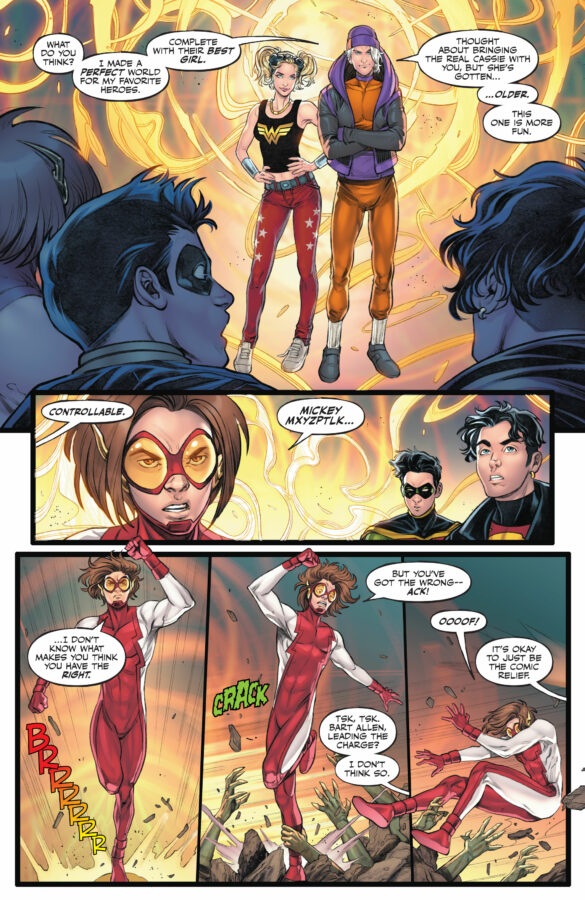 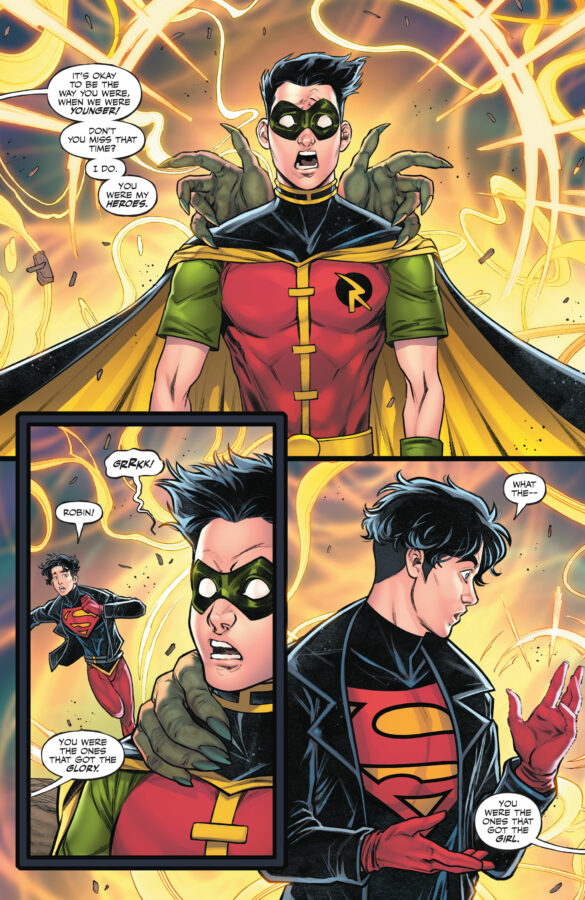 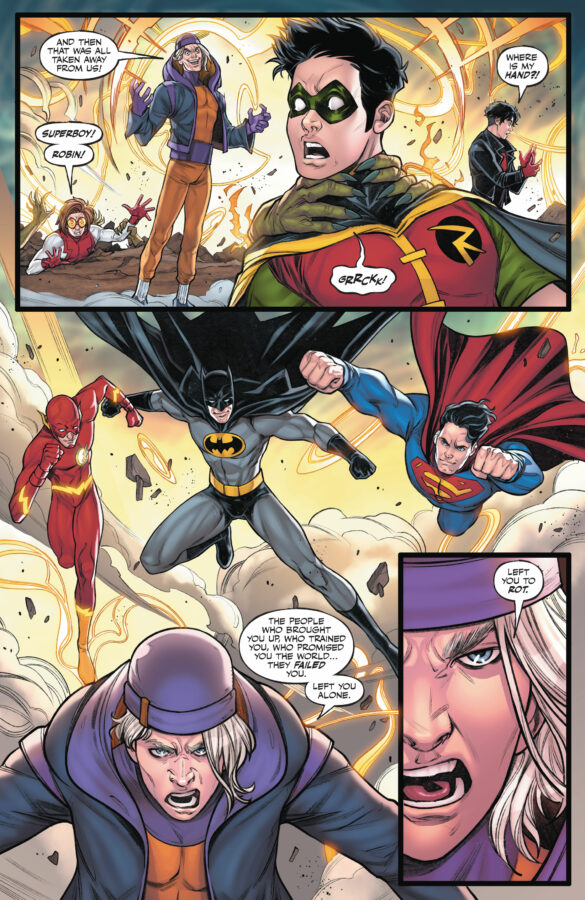 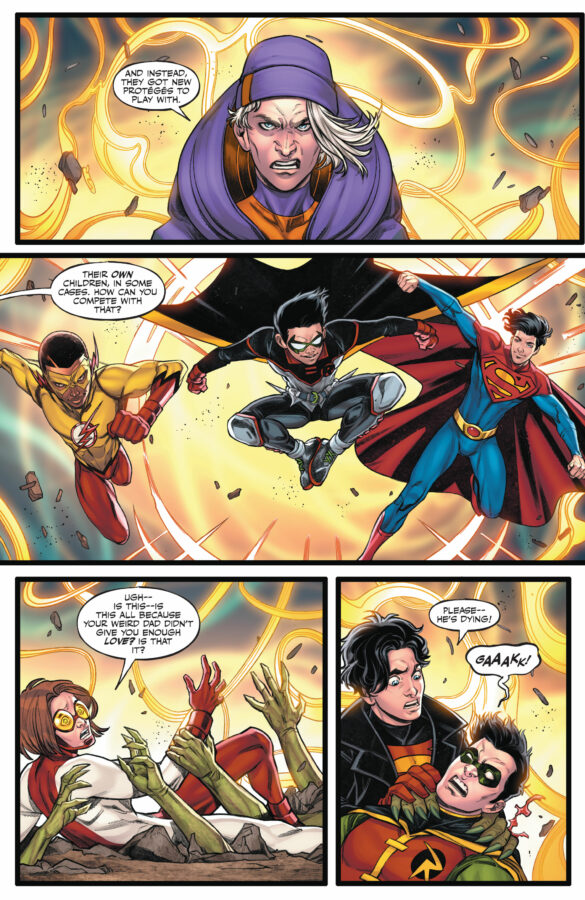 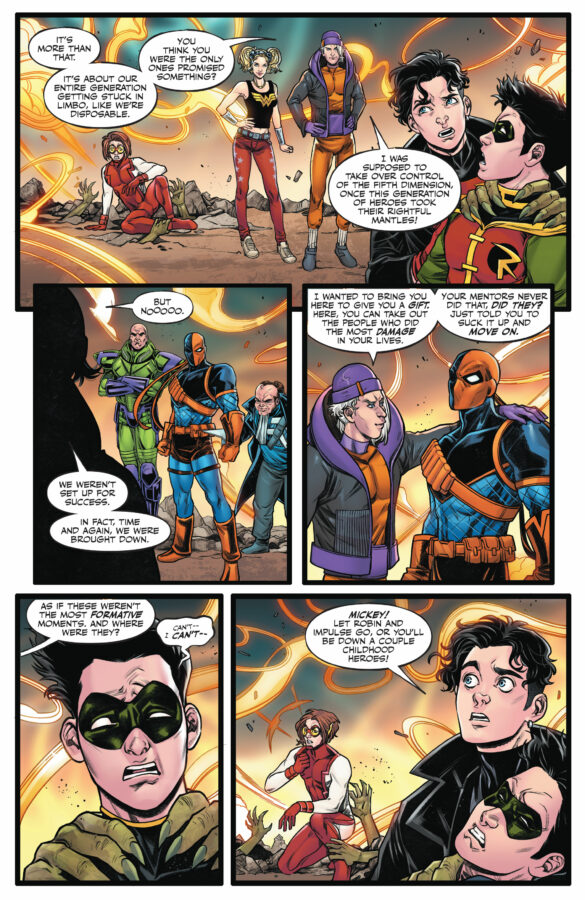 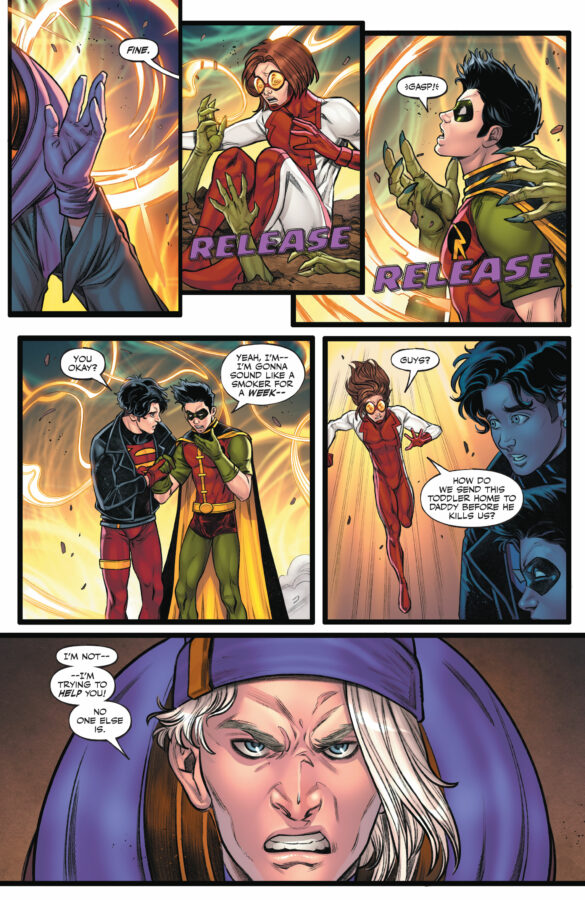 It turns out that Mickey’s a Young Justice superfan, from way back in the day, and he’s not happy with how the Young Justice generation of heroes has been treated in the last few years. So, instead of letting them get swept away by another cosmic Crisis event, Mickey teleports his favorite heroes to a new dimension, that resembles the 90s DCU, where he can watch his heroes relive their glory days as Young Justice. However, things go sideways for Mickey when the teenage boys reject his artificial reality, thereby forcing the fifth-dimensional fanboy to confront his prisoners.

To be blunt – Dark Crisis: Young Justice #5 is ham-handedly meta. Writer Meghan Fitzmartin uses Mickey Mxyzptlk as an analog for toxic fandom. You know the stereotype: the disgruntled white long-time reader who constantly makes noise on the web about DC’s “poor editorial choices”. These painfully, generally white, overly anal, mostly millennial nerds cannot bear the fact that their precious Young Justice generation has been replaced by a new one, made up of heroes who are more in-line with Gen Z. This subsection of readers is mired in nostalgia to the point where it becomes a form of arrested development. They cannot accept that the times have changed along with their favorite heroes.

To some extent, I can sympathize with Mickey. One of the major problems with the New 52 era is that DC either eradicated these characters altogether or drastically changed the Young Justice generation, to the point where they were hardly recognizable. However, DC has since course-corrected (thank you Rebirth), restoring these characters to their more traditional incarnations.

You’d think that Mickey and his ilk would be satisfied with this decision, but that does not seem to be the case. Mikey continues to bemoan newer legacy characters such as Wallace West’s Kid Flash and Jon Kent’s Superboy/man, arguing that they shouldn’t exist. This is where I take issue, as does the Young Justice crew. The team takes umbrage with Mickey’s complaints, arguing that these new legacy characters have just as much right to exist as they do.

As you can see, the entire conflict of this series is based on real-world discussions that have been thrashed out by fans and writers largely on social media. It doesn’t take a Ph.D. in literature to see the parallels in this story. While I enjoyed the idea of this theme, I will say that Fitzmartin has discarded any pretense or subtlety around this theme. Rather, she clobbers her readers over the head with it.

One of the more puzzling aspects of Dark Crisis: Young Justice #5 is Laura Braga’s visual storytelling. The first half of this issue is very streamlined and easy to follow. However, the moment that Cassie enters the fray, the storyboarding goes off the rails. At one point I thought that DC may have mislabeled the page numbers or something, as the sequence of the event wasn’t quite clear. I had to go back and reread the script to clarify what transpired. 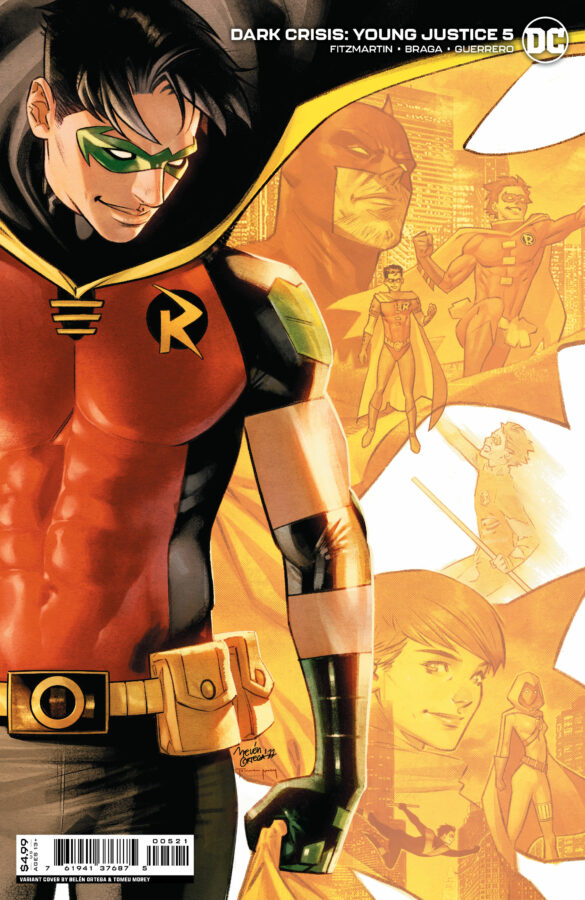 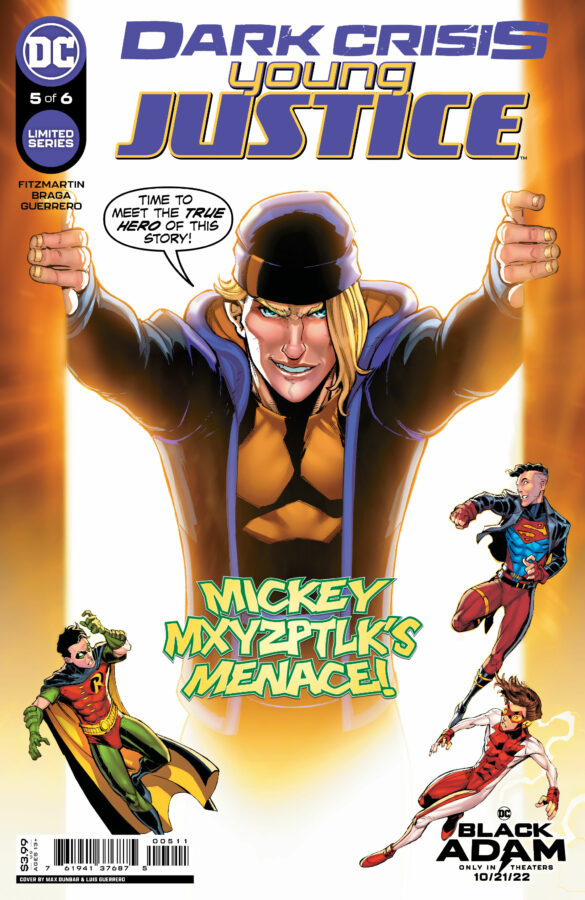 Beyond the bizarre storyboarding, Braga does a great job capturing the essence of 90s DC. Having these classic designs next to the sleek 2021 designs is a clever way of visually exploring the conflict between nostalgia and progress. Overall, the issue looks pretty good. I’d like to see her get more work in the future.

Dark Crisis: Young Justice #5 falls somewhere between jumbled mess and thoughtful commentary. While pertinent to the current discourse about nostalgia and representation in comics, Fitzmartin’s theme is painfully ham-fisted. It was actually so jarring at times that it became a distraction. As for Braga’s art, the final result was fine, but there’s definitely room for improving her storyboarding skills. The combination of these two factors makes for a technically flawed comic that was surprisingly fun to read.

Final Verdict: it’s a clunker, but still worth reading.