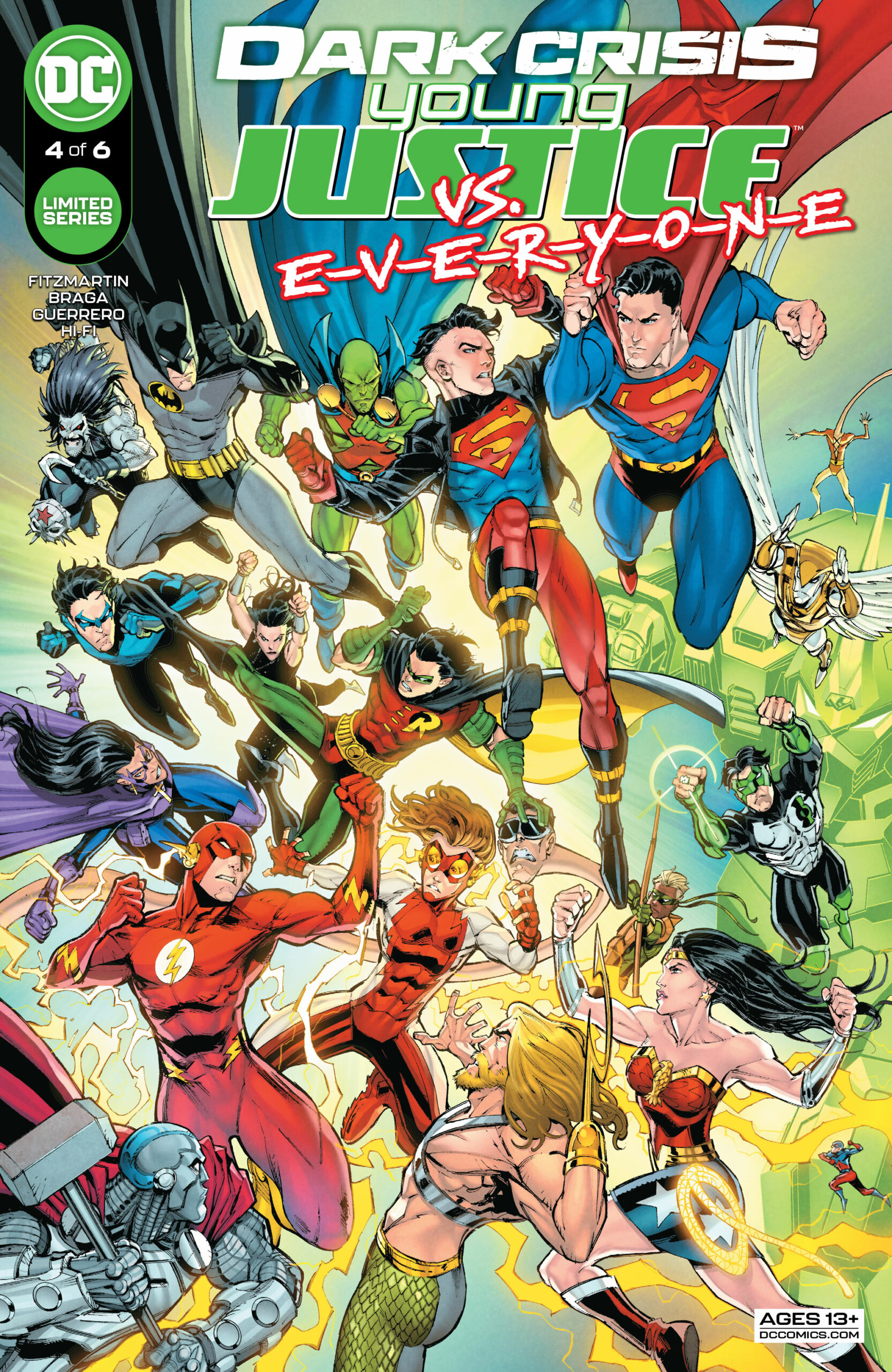 The team hashes it out while duking it out with both the Justice League and the Titans, in this month’s Dark Crisis: Young Justice #4.

After mourning the death of the League, Superboy, Robin, Impulse, and Wonder Girl all ran into each other at the Hall of Justice. Shortly after, the boys disappeared, leaving Cassie Sandsmark to search for her missing teammates.

Superboy, Robin, and Impulse woke up having somehow been transferred to the DCU of the 90s when they first formed Young Justice. However, things aren’t exactly right and the situation feels off. The boys debate whether they should stay or try and return home. That’s when the League turns hostile. The latest issue opens with the three heroes fighting the 90s incarnations of the DCU’s most powerful heroes.

Meanwhile, Cassie recruits Red Tornado and Arrowette in her hunt for her missing teammates, but her presence dredges up some painful memories for Wonder Girl, who feels that her former teammate had unjustly cut her off. 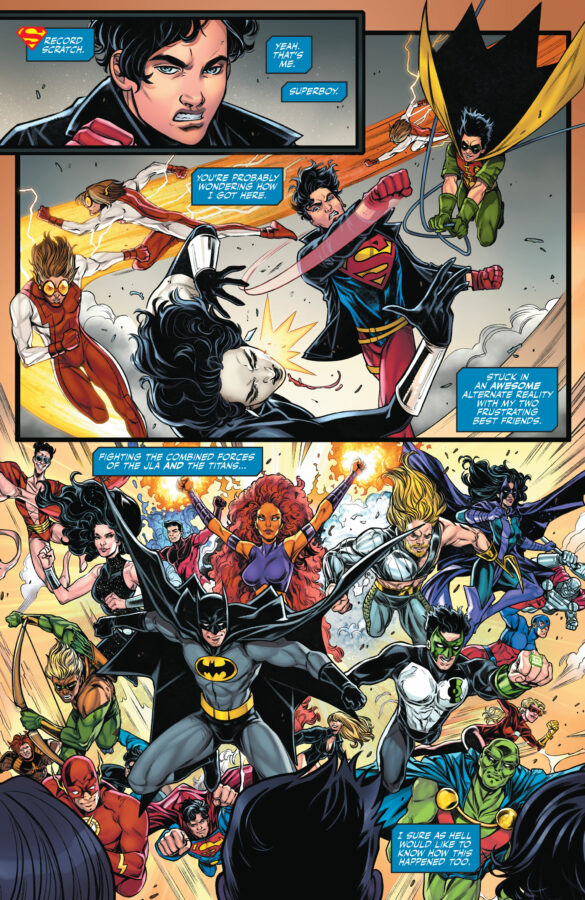 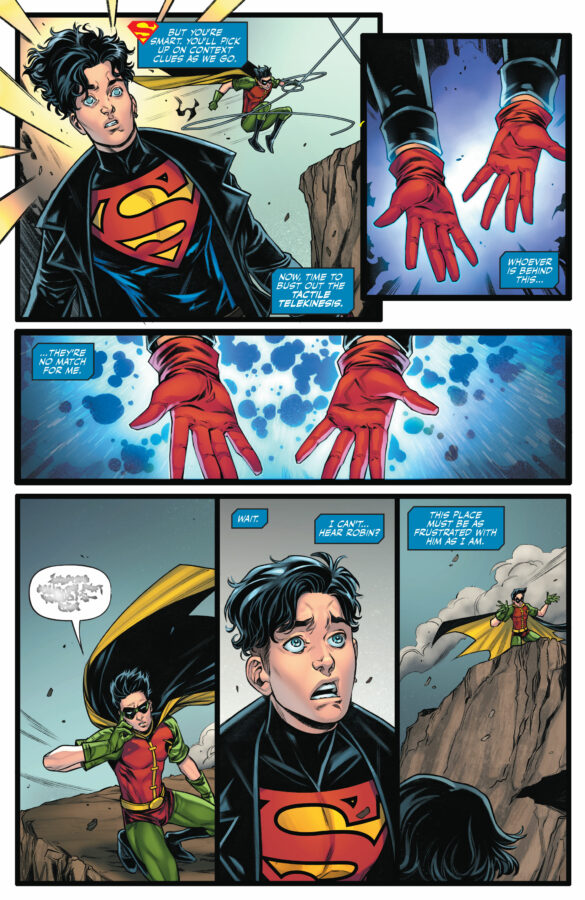 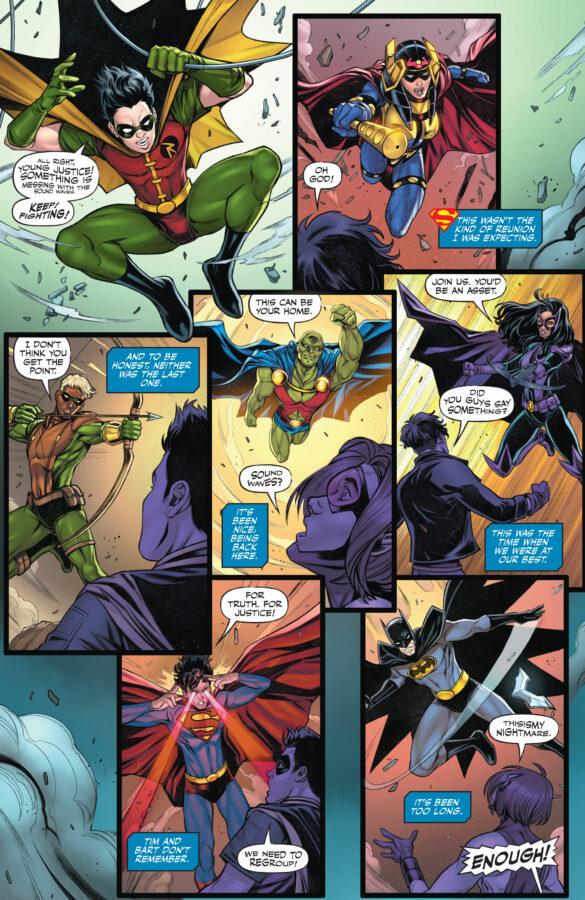 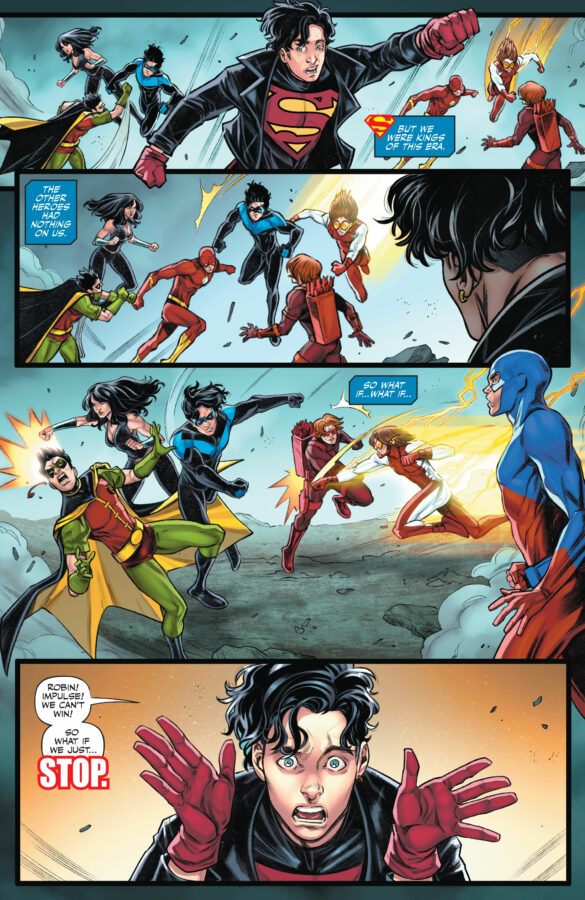 One of the more clever aspects of this miniseries has been Meghan Fitzmartin’s allusions to Peter David’s Young Justice. Many Millenials (and Gen-Xers I assume) have fond memories of the OG Young Justice series. Fitzmartin taps into that, turning this series into a commentary on nostalgia. Once the boys realize that they hadn’t time traveled, rather that this version of the DCU is something else entirely, the series takes on a meta aspect. The boys’ comments about their fake reality could easily be seen as comments about Peter David’s Young Justice.

This is when we were at our best.

All of this commentary is framed around a reckoning that the boys are having with each other, and, to a certain extent, the confrontation between Wonder Girl and Arrowette. As the boys tangle with the League, they carry on arguments with each other as well. It’s somewhat comical. While each of these boys opens up, sharing their long-held grievances with each other, they’re also dodging heat vision and batarangs. It’s actually quite genius. The physical conflict mirrors the emotional one that’s unfolding between the three heroes.

Fitzmartin takes a similar approach to Wonder Girl and Arrowette. Although they aren’t physically duking it out with an exterior force, they’re constantly on the move in the issue, trying to find their lost teammates. As they move from place to place, there’s a running conversation about the problems in their relationship. It’s not quite as effective as the boy’s scene, but it works well with the pacing of the issue. 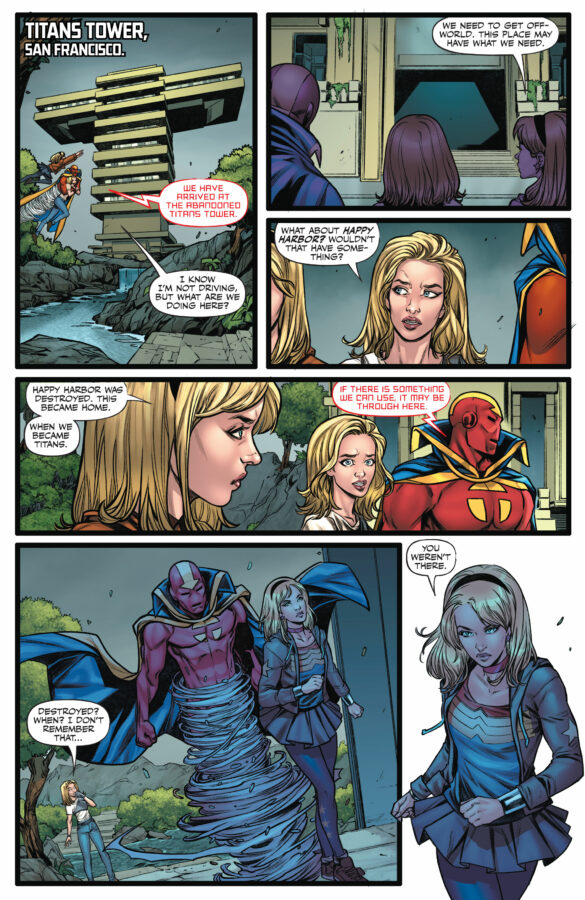 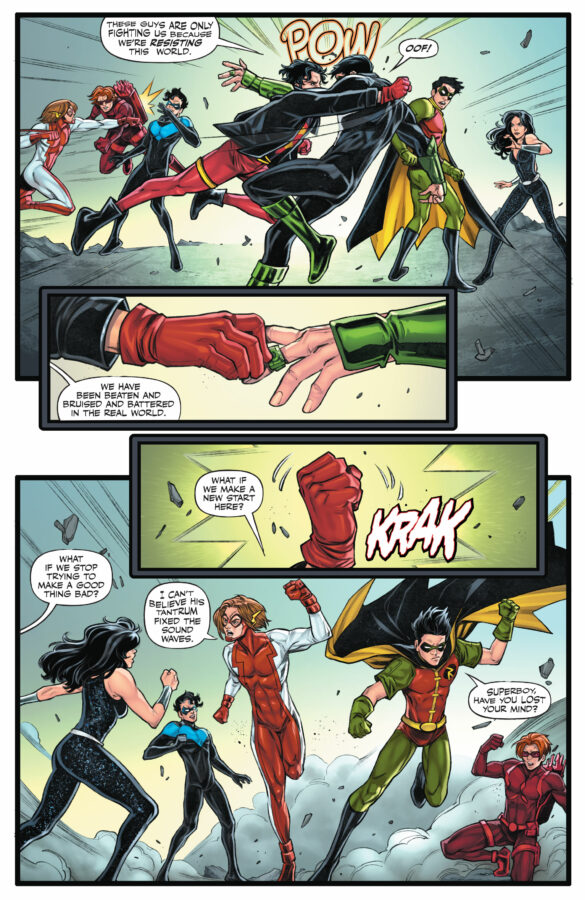 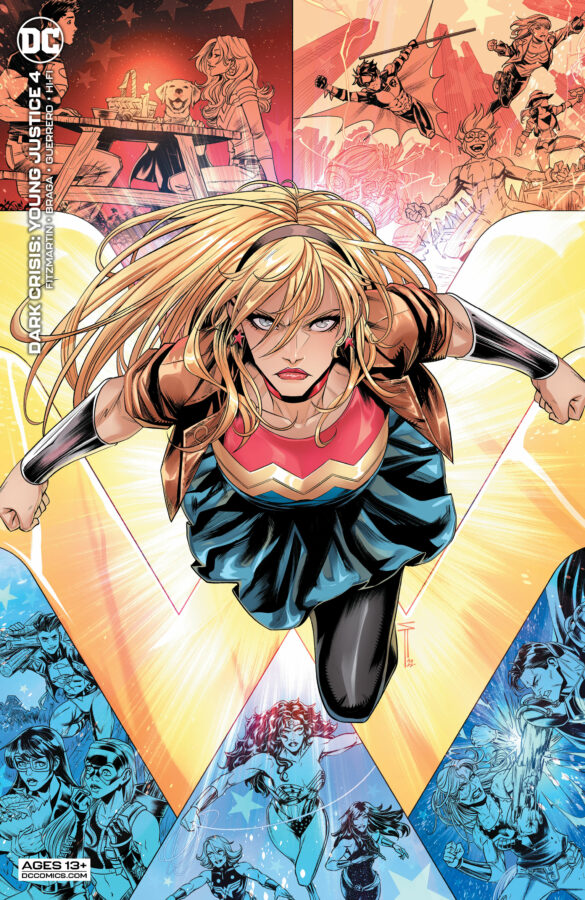 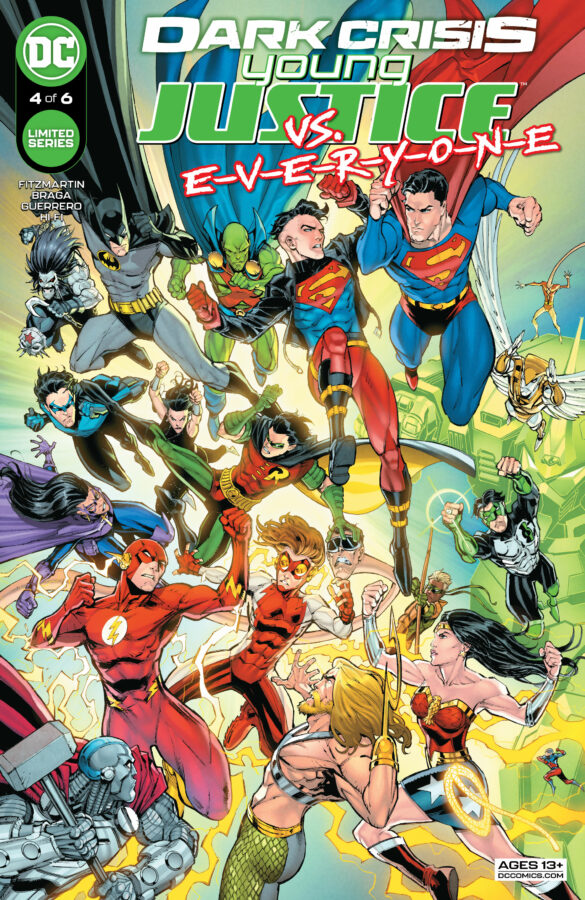 Laura Braga brings her A game to Dark Crisis: Young Justice #4. There’s a lot going on visually in this book, the majority of which is one large fight sequence, with the interspersed Wonder Girl/Arrowette search party storyline. The characters are constantly moving in dynamic and fast ways and Braga shows that urgency with her art. Between the paneling and the action, the pace of this issue feels breakneck. However, despite its hurried pace, none of Fitzmartin’s character moments are lost in the visual scramble. Braga masterfully navigates the tension with what feels like utter ease. Mind you, she manages to accomplish all of this while channeling the aesthetics of 90s DC. It’s very impressive.

Dark Crisis: Young Justice #4 is a great issue. Fitzmartin’s script feels honest and insightful, as she navigates both the joys and problems that nostalgia can bring, and Braga’s art more than keeps pace with the fairly ambitious script. The book also finally reveals the mastermind behind everything, and it’s pretty cool. I’m looking forward to seeing what happens next.

Final Verdict: both introspective and fun; this issue’s the best of both worlds.