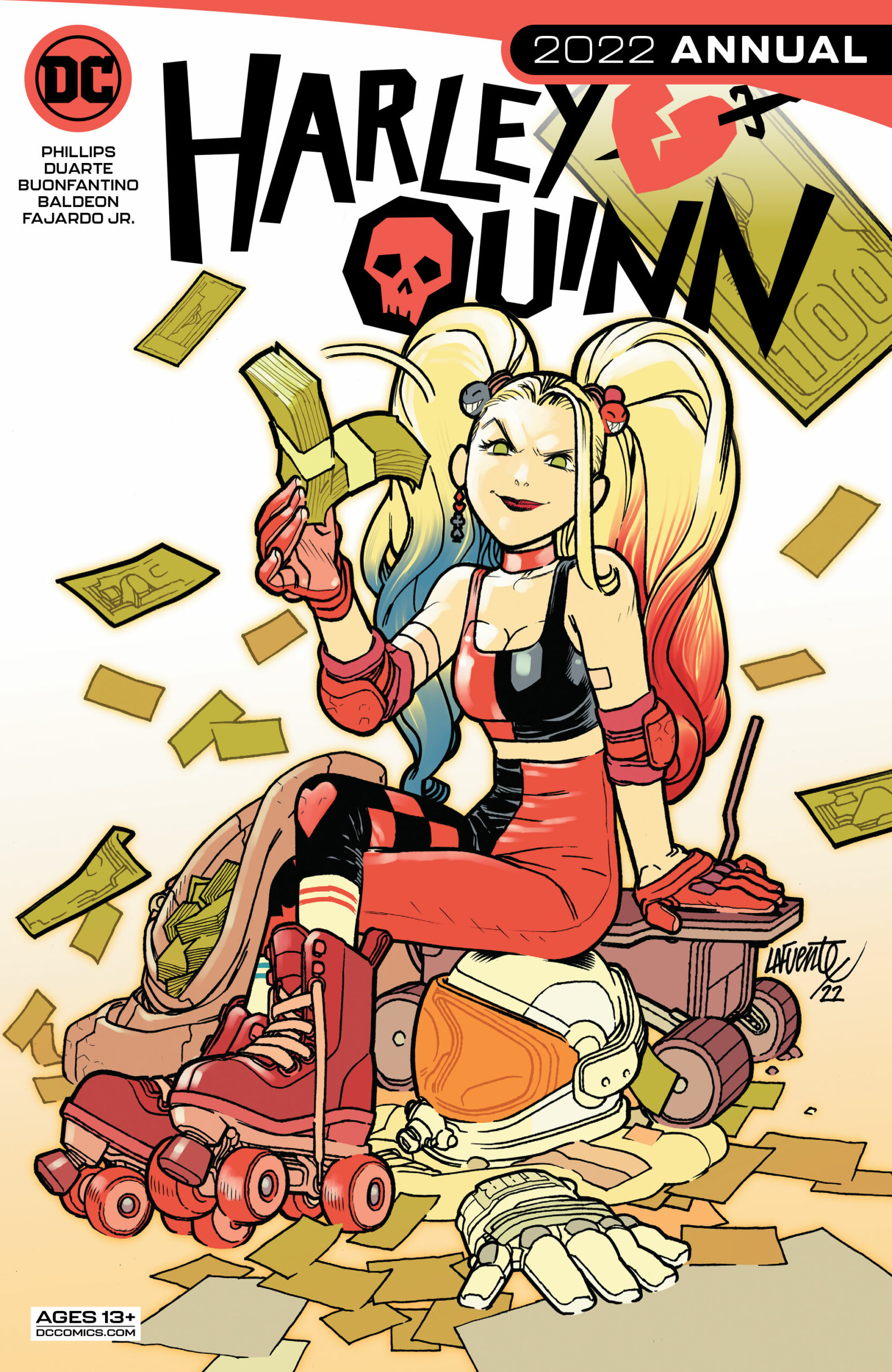 The Harley Quinn 2022 Annual is upon us, and with it the closing of the Task Force XX saga. While we have many beautiful covers to select from, the crown jewels for me are the Ryan Sook piece, the Jim Lee homage cover, and the stunningly portrayed carefree Harley Quinn by Carmine Di Giandomenico.

When we last left our team in Harley Quinn #21, not only were they in the thick of it, with the newly super-suited Luke Fox, but Element X had declared that it wanted chaos with some Spice Girls thrown in.

Let’s dive in to this final chapter issue! 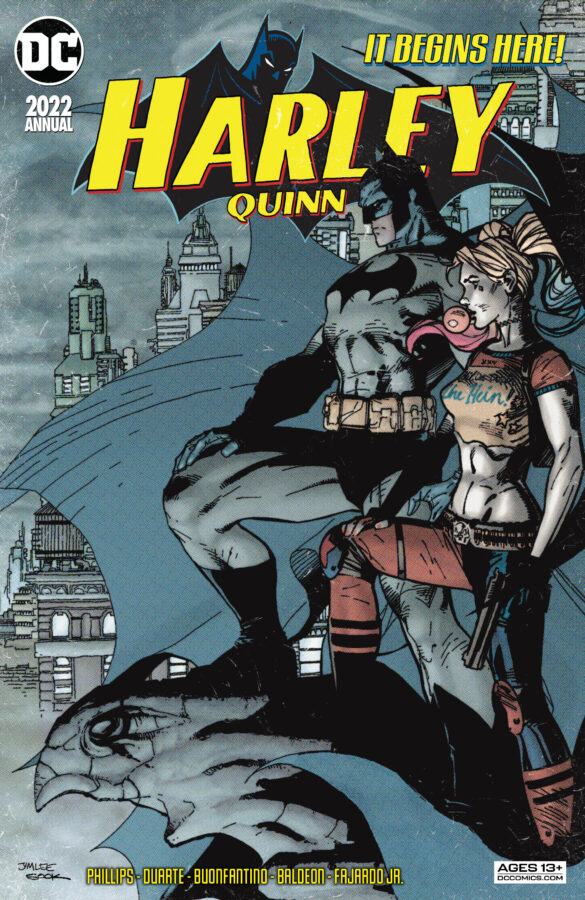 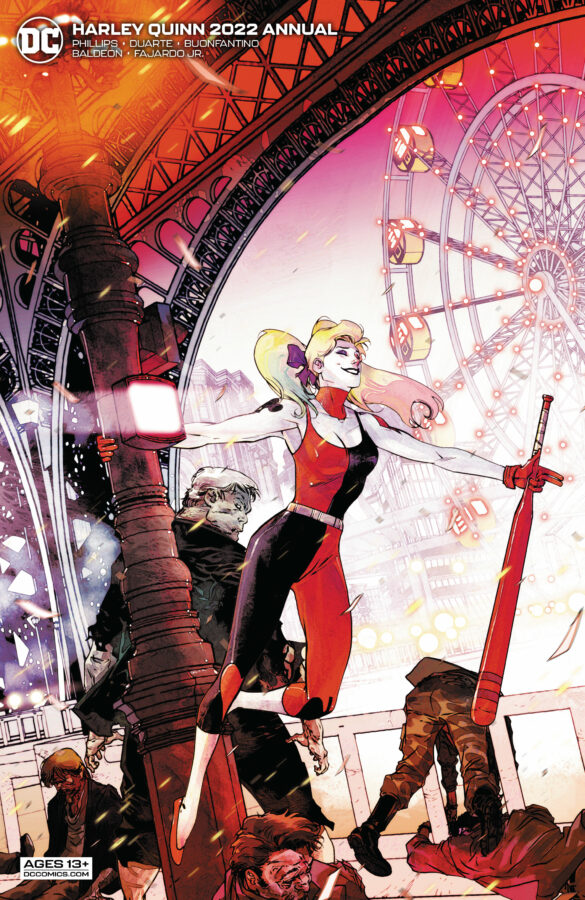 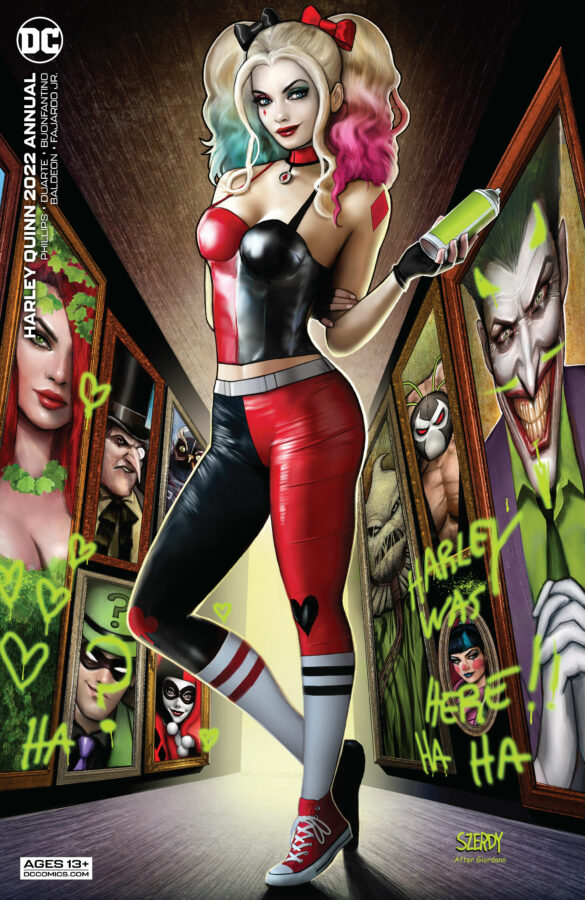 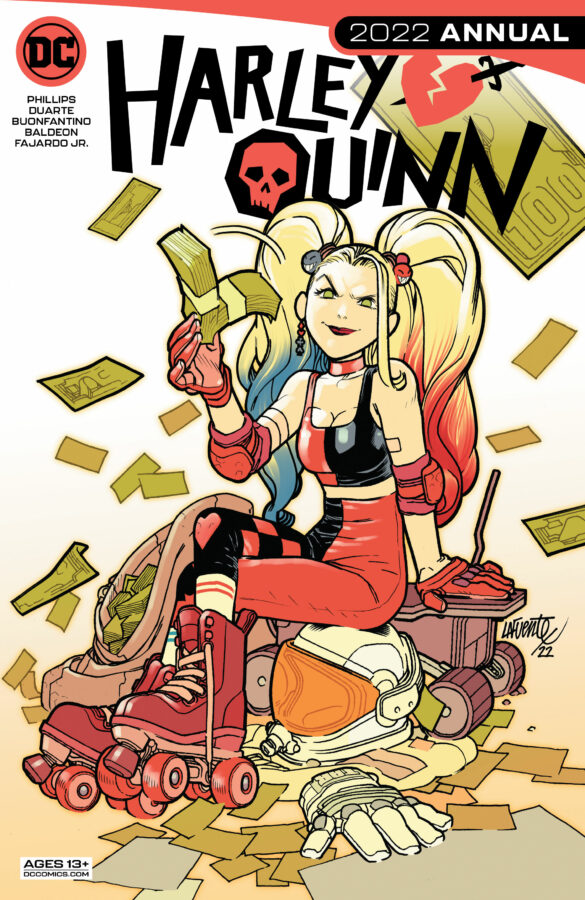 A war is waging and Harley is coming in with, not only attack sequence Alpha, but also a new toy courtesy of Luke Fox. In fact all of our team are toting new weapons and new attitudes ready to take on Element X. However, the element itself has other ideas about what needs to happen. It’s searching for people to assimilate fast and quick and where better to get a whole lot of bodies but the closest, largest concentration of them, than Blackgate Penitentiary?

With a “winging it” style plan and a hope or two in tow, the Task Force makes its way into the prison, but Caitlin Snow has a secret that even with its extensive knowledge, Element X isn’t prepared for. Will that be enough, though? It’s the final countdown and either Task Force XX stops X here…or everything ends.

The Harley Quinn 2022 Annual gives readers action and heart and the electronic supercharged mallet named Jeff is really just icing on the cake at the end of the day. This finale gives us a “where do we go from here” scenario if you will. Stephanie Phillips honestly didn’t take this story the way I expected her to, particularly when it comes to the relationship between Harley and Sam, which made this arc all the better. 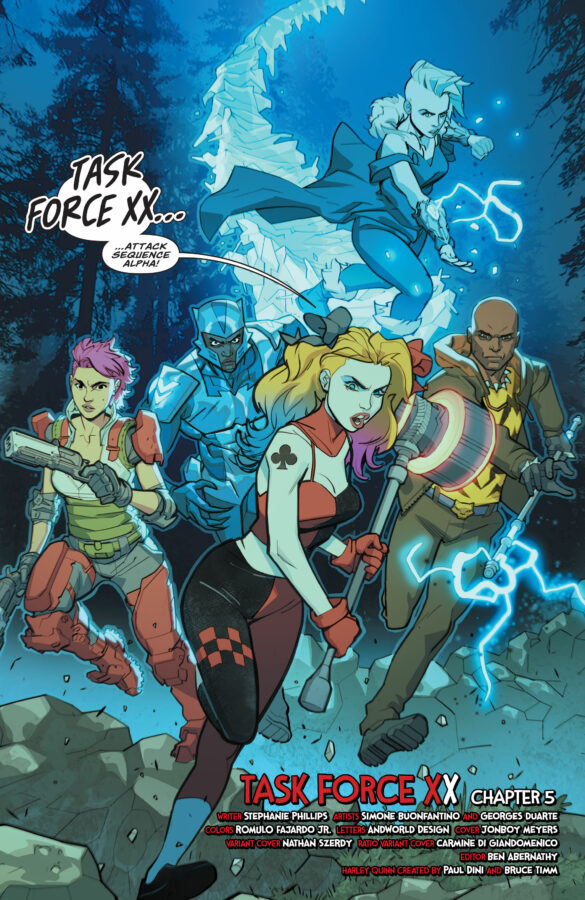 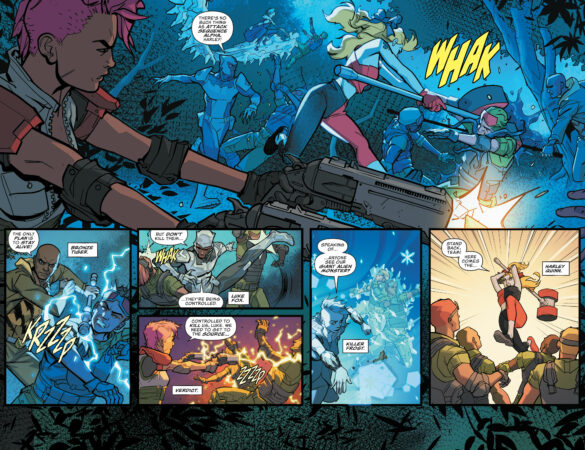 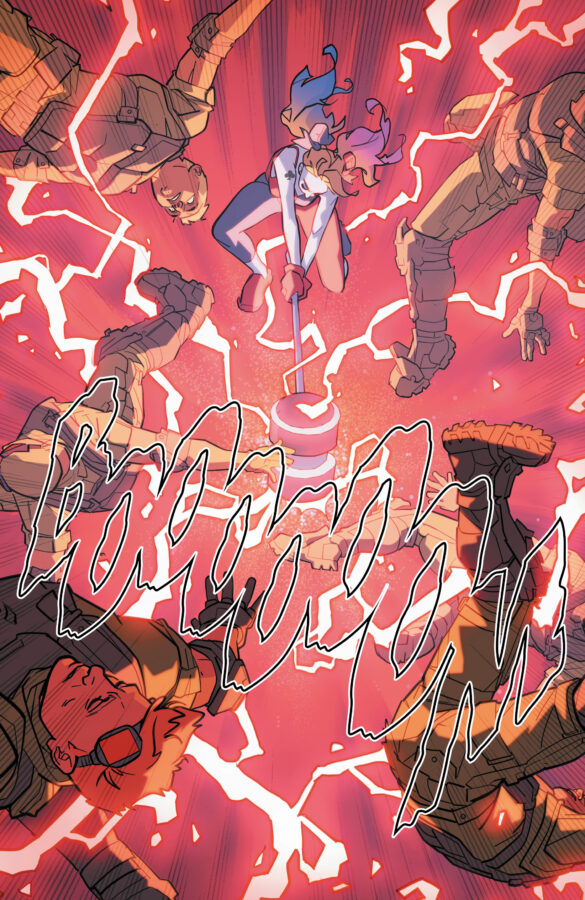 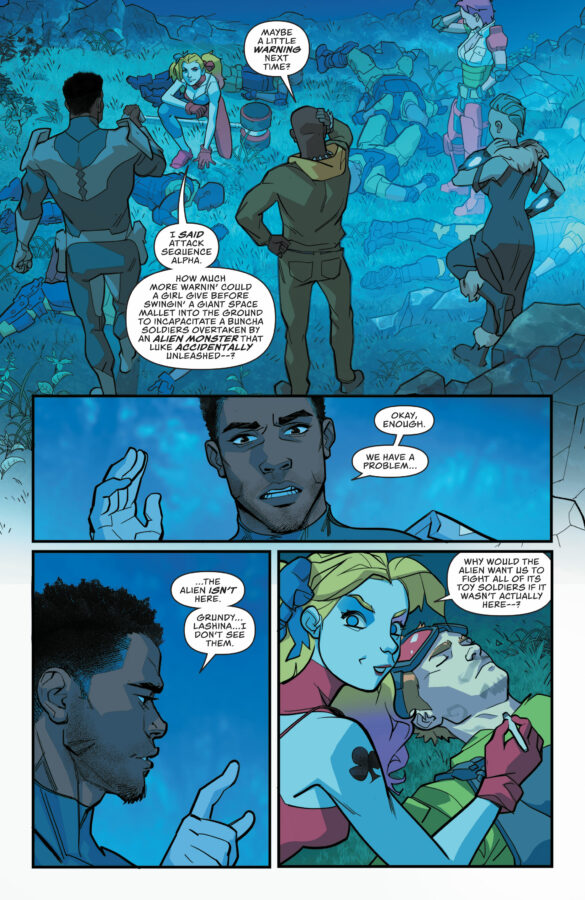 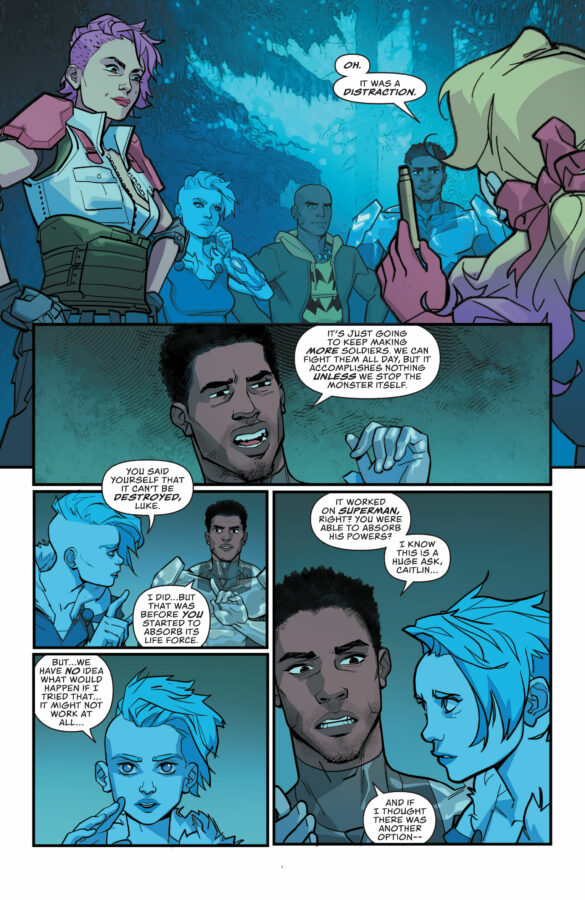 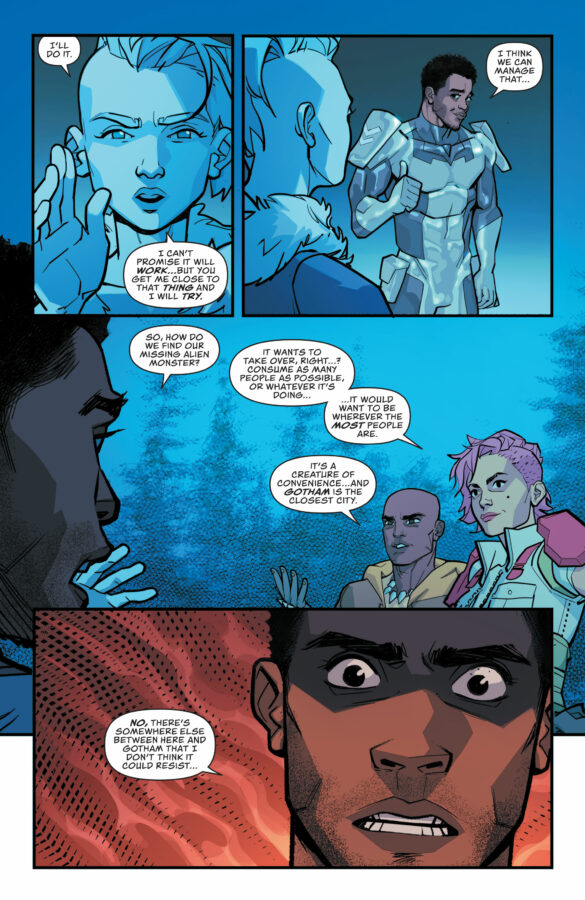 The artwork’s beautiful and readers are treated to a small teaser featuring Harley in Las Vegas with Kevin. Thanks to the gorgeous visuals by David Baldeon, and the color work by Antonio Fabela, Harley seems to be getting far more than just a vacation. Then the feds show up looking for something familiar that Harley’s kept a hold of, all of which promises fun times for issue #22 and beyond.

The Harley Quinn 2022 Annual delivers a perfect the ending to the Task Force XX story arc. Honestly, I could’ve done with about 2 more issues, but I’m just greedy for content and a sucker for a fully fleshed story line. I’m now really looking forward to seeing what comes next for the Mistress of Mayhem!