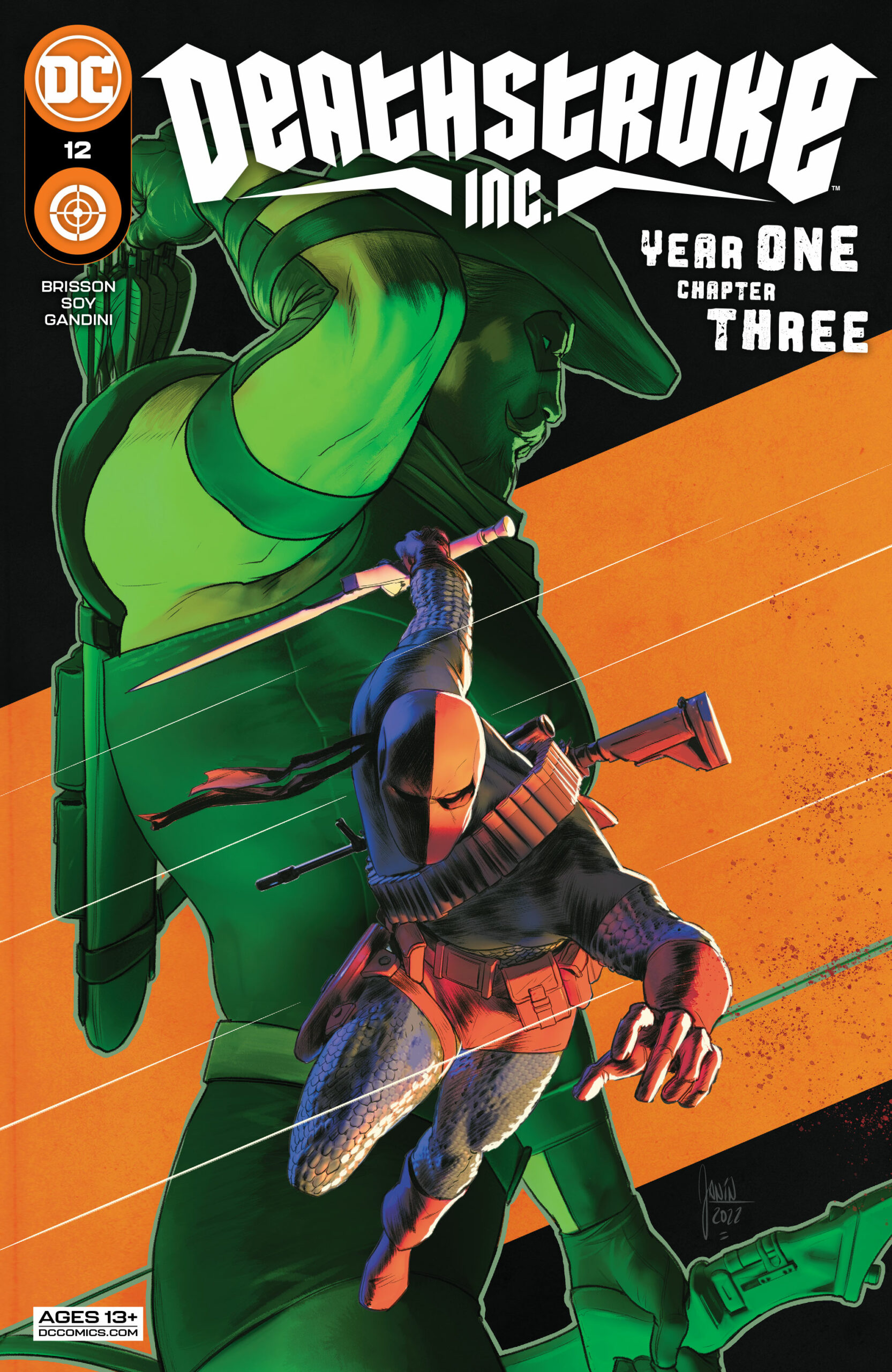 And here’s chapter three! The current arc of Deathstroke Inc. has been stretched out over several issues and it’s been a fascinating read. Deathstroke Inc. #12 introduces readers to even more complications in Slade Wilson’s backstory as he attempts to finish his first assassination. Will our “hero” be successful or will he finally encounter his match in weaponry and violence?

There are spoilers ahead from this point on, so read on with caution!

The very first showdown between Green Arrow and Deathstroke continues in this issue with a whole lot of action. Although Slade doesn’t know who it is he’s facing off against, he immediately realizes that his opponent is skilled. The two battle using weapons, words, and fists, but are strangely rather evenly matched. Considering the amount of power Slade gained post-experimentation, it’s fascinating to see someone who can actually hold his own against him in combat. 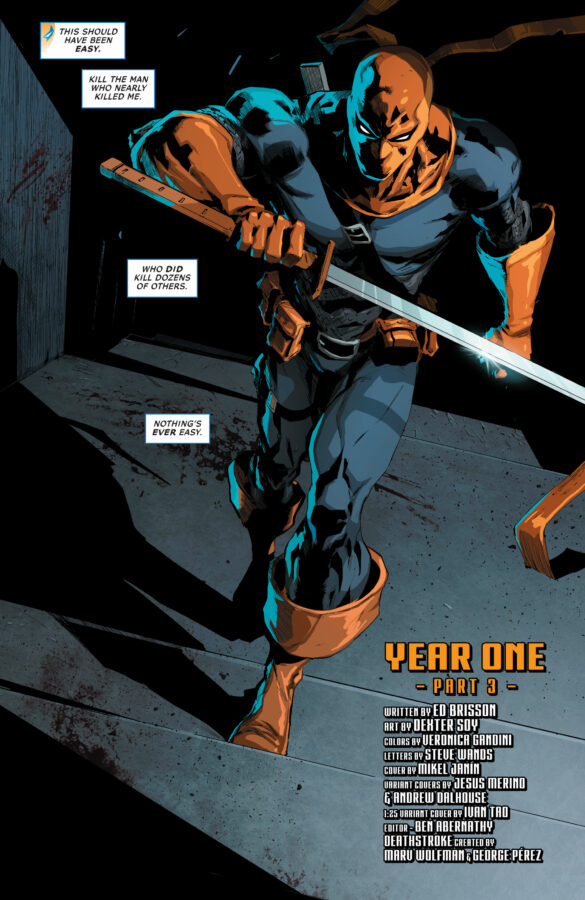 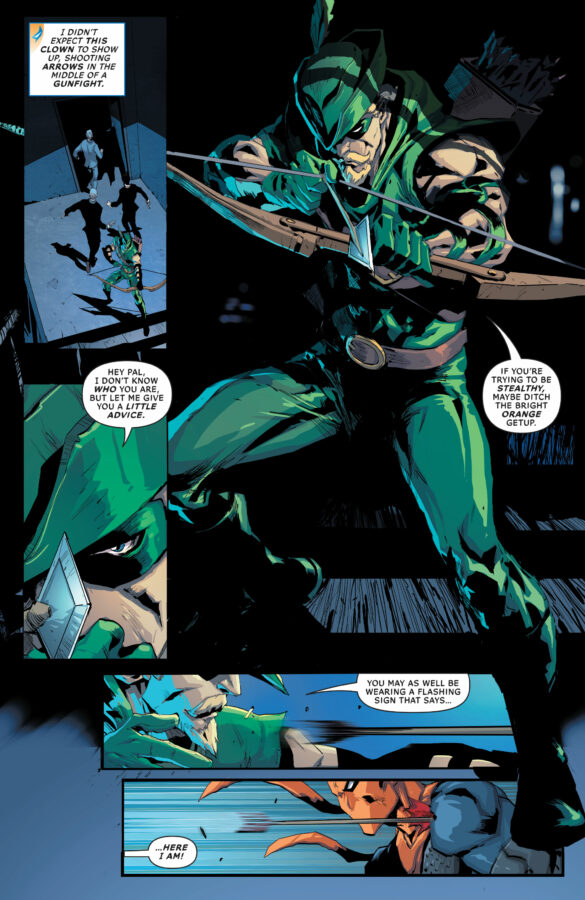 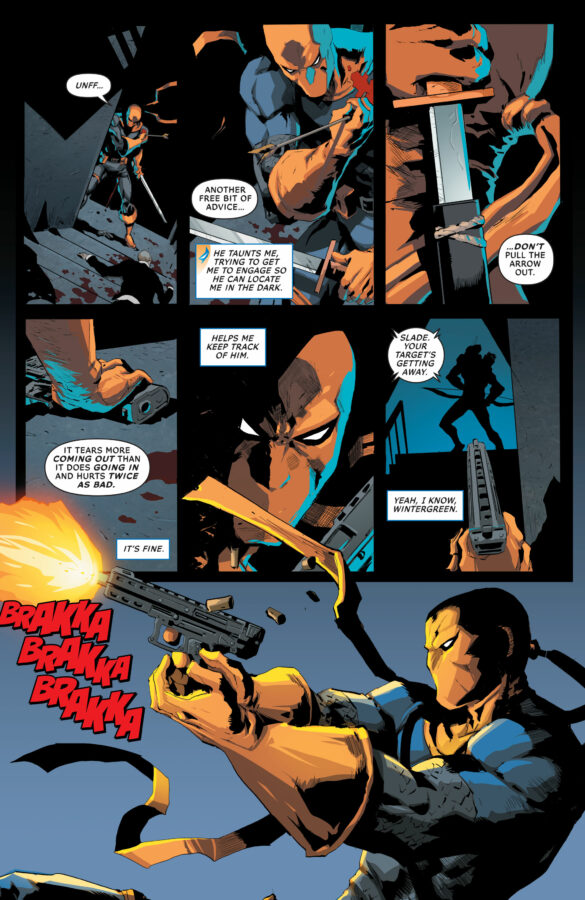 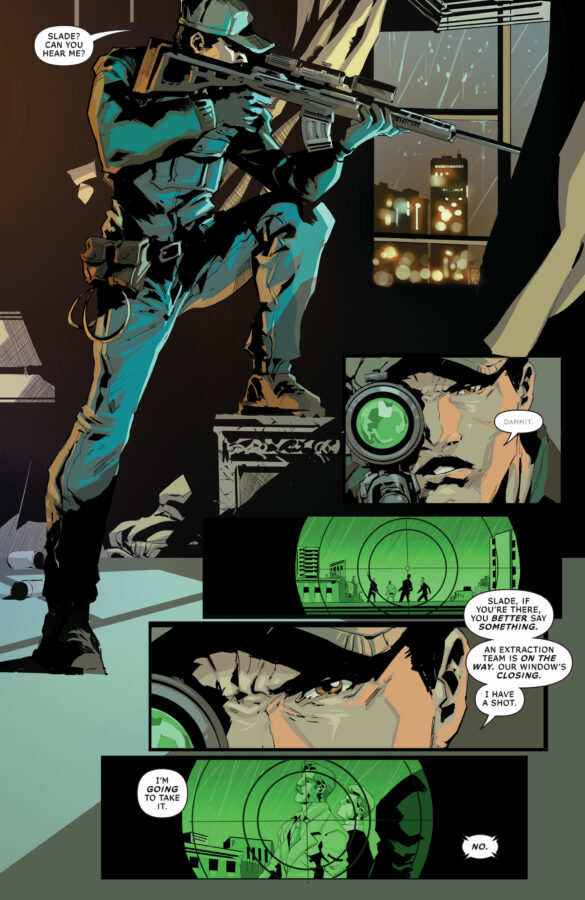 At this point, it’s unclear to Slade whether Oliver Queen has his own superpowers or is just a regular guy. What does seem to be clear however is that the Green Arrow can take nearly as many punches as our protagonist. The entirety of this issue is spent with the adversaries sizing each other up and trying to incapacitate the other. Overall, I’d say that Slade wins the battle of wits. The physical fight however is harder to determine, depending on how you look at it.

Fans of the Green Arrow know Oliver Queen as a hero, but in a Slade Wilson-centric story, he has to be viewed as an antagonist. While Deathstroke’s actions as an assassin for hire are morally reprehensible, Slade sees what he’s doing as right and justice for the lives lost at the hands of the man he’s trying to kill. Additionally, is it wrong to do a job that isn’t morally correct, or is it more awful that someone is paying Slade to seek vengeance? No matter how you feel about the issue, Deathstroke believes himself to be in the right and that leaves Green Arrow as someone who’s wrong and, therefore, an enemy.

Outside of the comic meta, of course, Green Arrow trying to save a man from assassination is the right thing. However, we’ve seen that Oliver’s known ally, Black Canary, has historically been swayed by morally grey issues. Would Green Arrow possibly be swayed if he knew the real reason why Deathstroke’s trying to take out Doctor Campbell? Would he want to protect the scientist less if he knew the experiments and deaths the man had caused? We don’t know Oliver Queen enough at this point in time to say for sure, but considering how previous issues have gone, Deathstroke’s arguments for his actions might not fall on deaf ears.

Speaking of Deathstroke, we finally get to find out the context of our hero’s name in his history! Slade creates the name himself. It’s always cool to see a name drop in media, especially if the said name is connected to the title. It’s not entirely clear why Slade chooses this name specifically, but it’s a really cool panel and adds emphasis and importance to the origins of the character.

This issue continues to show Slade causing death (with Wintergreen assisting when needed). The pages are littered with action sequences, onomatopoeia, and men falling after facing Slade’s guns. However, the B storyline for this issue is focused on life. Slade’s wife Adeline finds out that she’s pregnant with the second Wilson child.

The interplay and juxtaposition of this issue’s storylines are masterfully done. Between panels of Slade killing the men hired to protect Dr. Campbell, we see Adeline grappling with the news of her new child. This creates a neat dichotomy and implies almost karmic retribution in the future for Slade’s children. Deathstroke at this point has taken quite a few lives, so the pairing of these scenes sets up the clear connection that the Wilson kids will pay the price for their father’s violence. 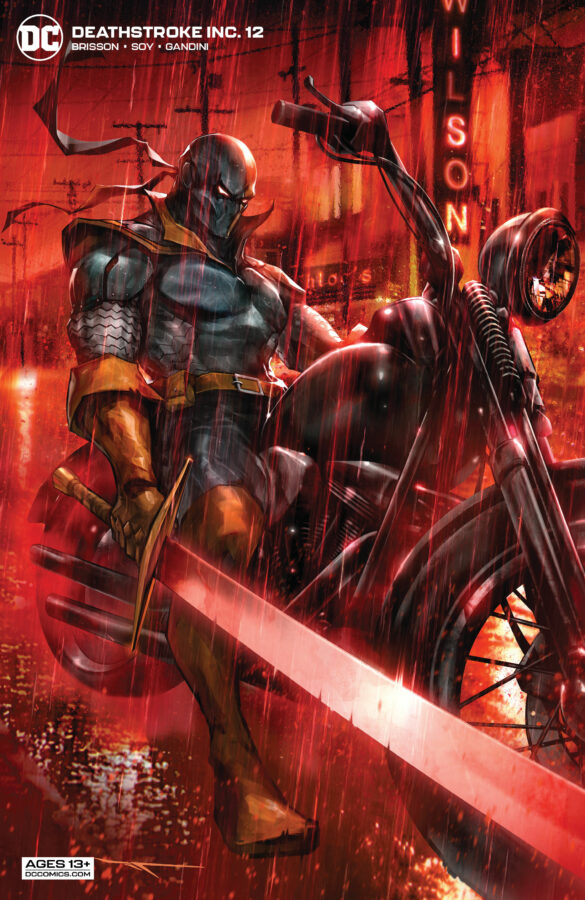 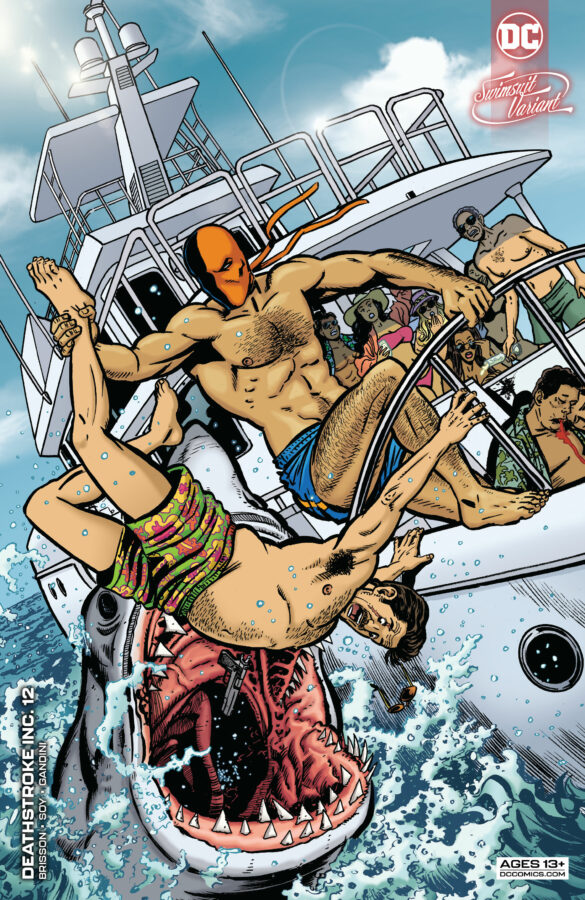 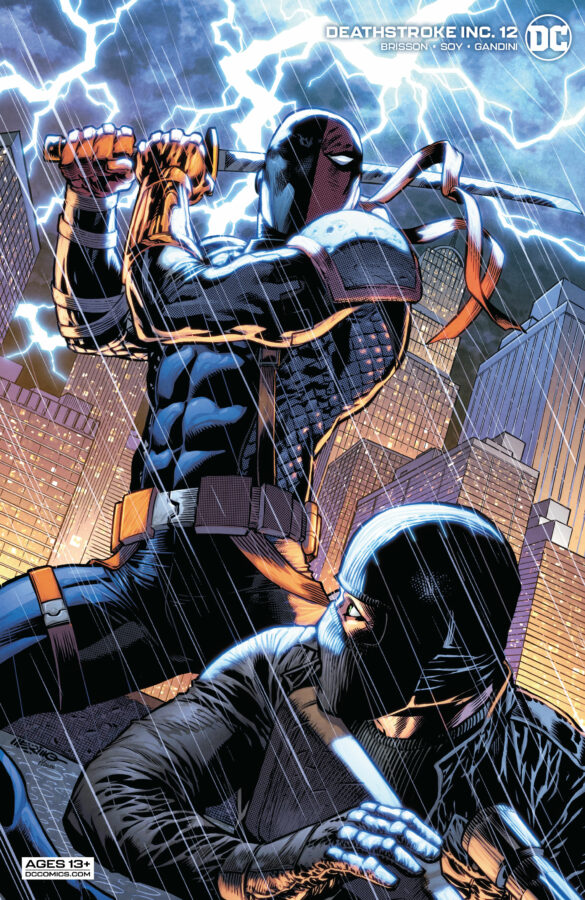 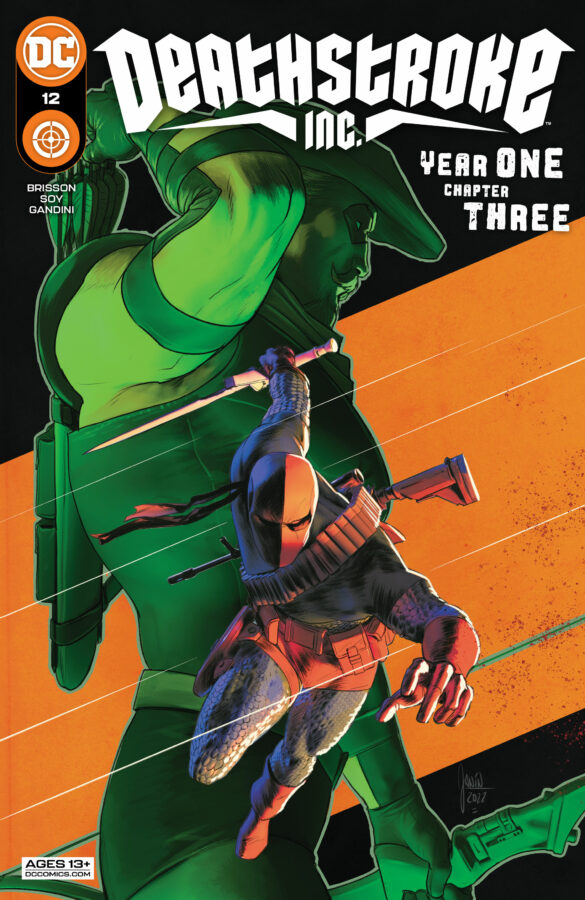 This arc really has me hooked! Deathstroke Inc. continues to evolve and grow with fantastic art, colors, and an engaging story. Clearly, there’s a lot more to unpack with Slade’s backstory (if that ending is any indication!), so I’m really excited to see how this continues to go. Admittedly, I’m a bit over Wintergreen, so I hope to see more interactions between Deathstroke and Green Arrow instead. I’m also excited to see how Slade reacts to the news of his unborn child and how that will continue to affect his psyche.

Please comment with any theories or thoughts you have below!