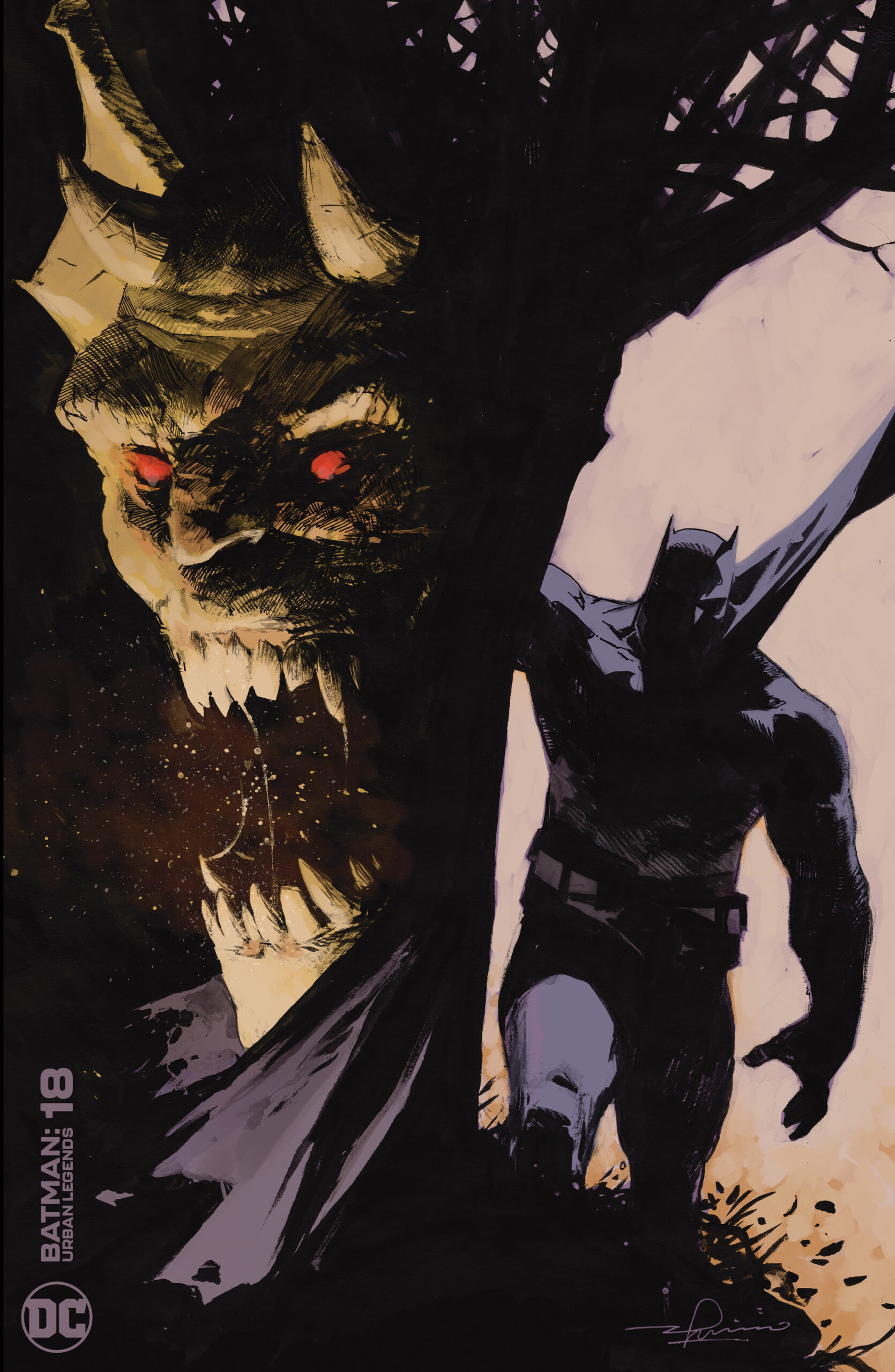 Batman: Urban Legends #18 takes us back, forward, and through the present day with a mixture of stories of all shapes and sizes. Doctors, demons, thieves, and reptiles are plaguing Gotham. Just another Tuesday.

When I first read the title of this story I was immediately pleased. Duke Thomas has been front and center, shelved, and then misused over the last few years. It’s nice to have a story and a team that feels like a naturally good fit. Of course, this isn’t his first time with The Outsiders, but I believe it’s the first instance where he’s had the top billing. Which I appreciated. 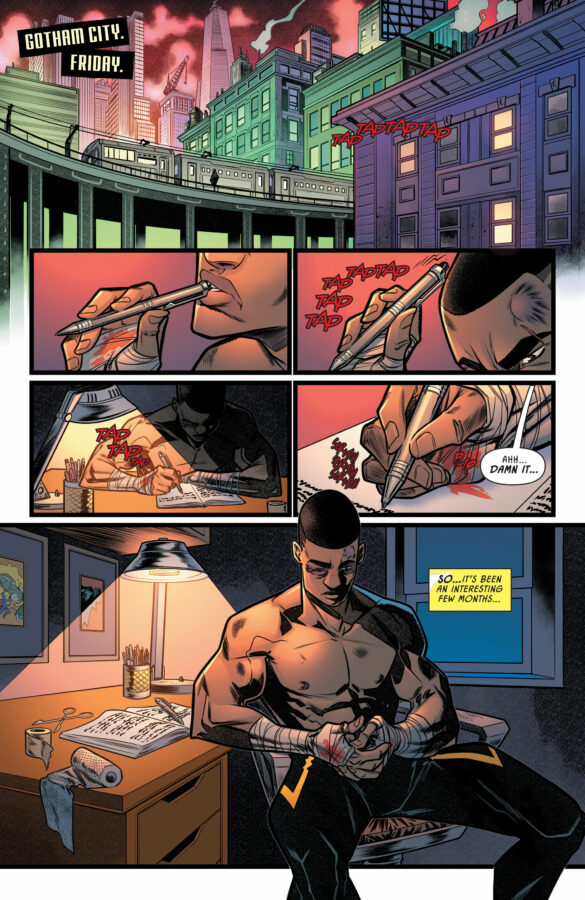 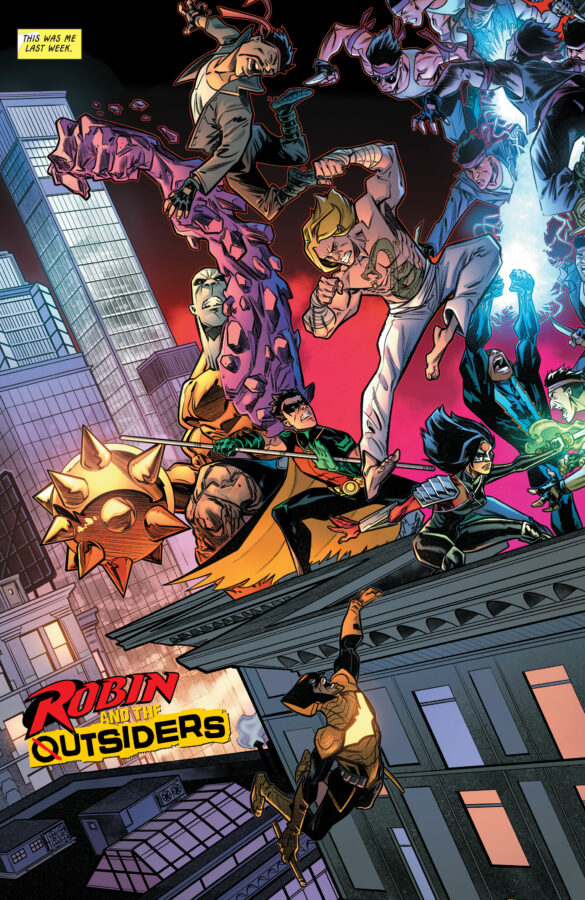 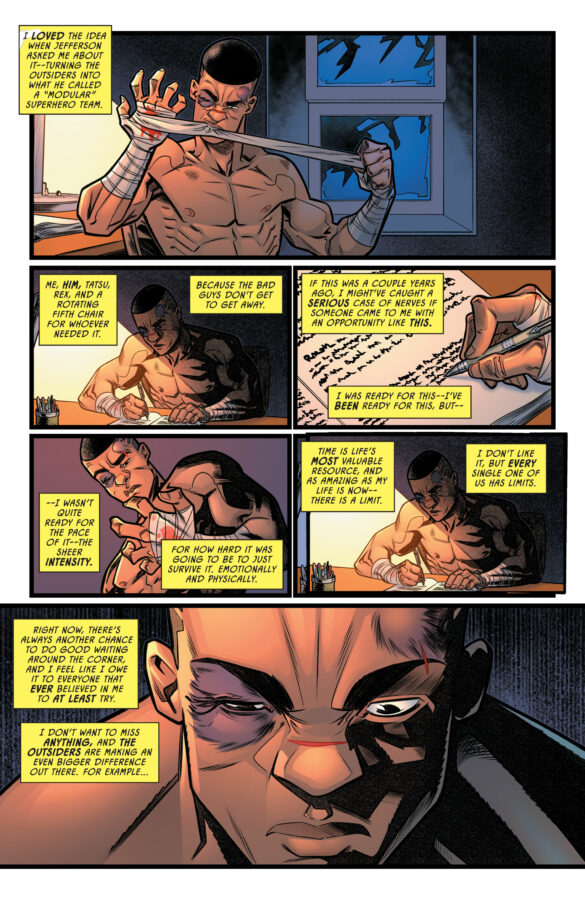 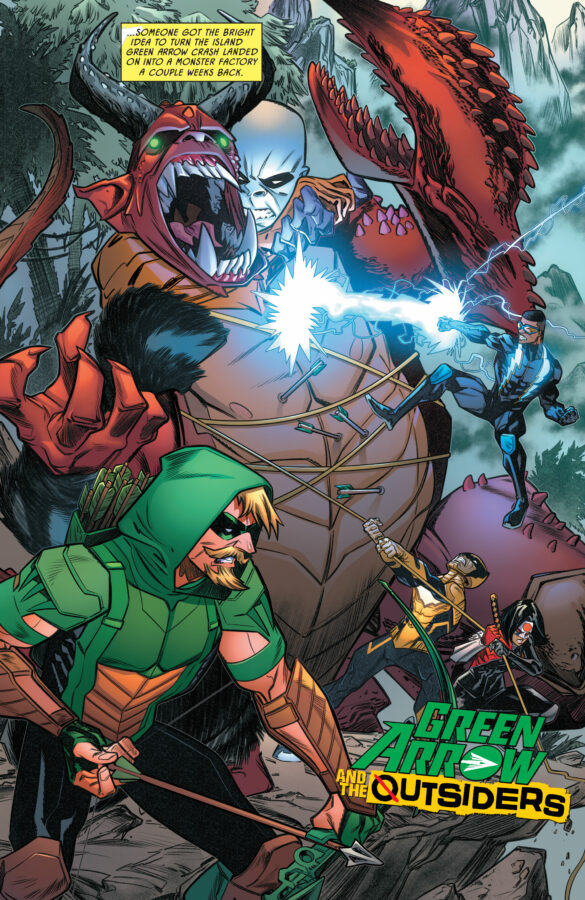 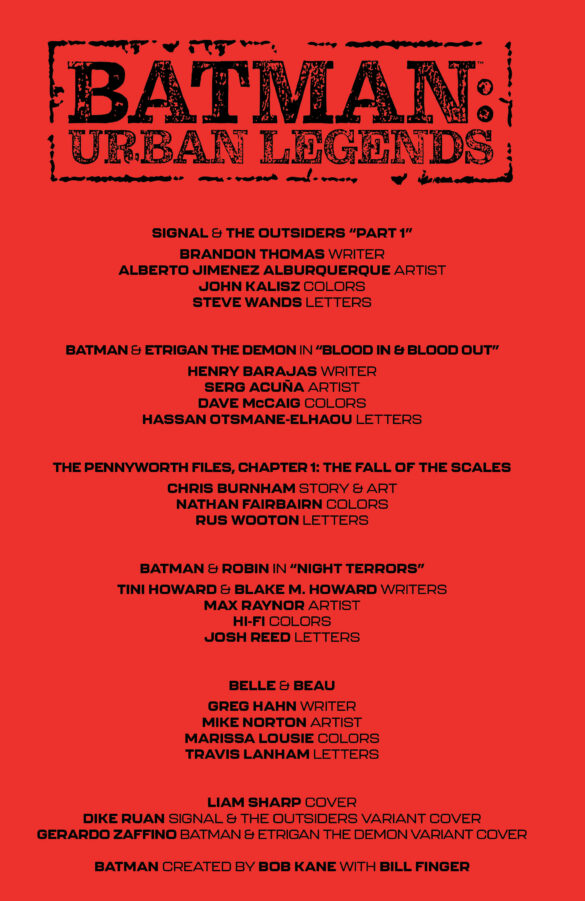 So, we jump in with the exhausted, beaten, bloodied hero; writing in his war journal. Not new for comics fans, perhaps, but definitely so for young Duke. This young man’s come a long long way since “Zero Year”. We learn that the team of Outsiders has a core of four members, consisting of Black Lightning, Katana, Element Man, and The Signal. This is the “Modular” team that would incorporate the fifth spot for heroes needing help with different cases. I love that. We get a few pages showing the likes of Tim Drake, Green Arrow, and the new Mister Miracle fighting as part of the team, which really was fun.

This story really did add to the development of Duke Thomas. He already has an origin story, a team-up story, a big DC event story, and an Elseworlds story, Now we finally have him coming back to one of his main unresolved issues, which is extremely welcome.

The story was well written and well drawn and I can’t wait to see where this tale leads us, maybe into a new ongoing series. Stay tuned for more info, and make sure you have… Signal.

Oof. Even I cringed at that pun!

“Blood in and Blood Out”

This story felt a bit abrupt at first, it appeared out of nowhere and seemed to be a continuation of something. I didn’t let that stop me, though. I read on and trusted that maybe everything would become clear as the tale went on. It did. This is in fact a continuation of an Etrigan Story from 1992. Great! Better late than never for closure, I guess? Someone tell their Dad though that The Demon story that started in 1992 finally has a bit more to it.

This installment felt like it should have been in an issue of Justice League Dark; there were demons, cults, and Bood… Jason Blood. It’s hard to keep track of Mr. Blood’s status as a hero, immortal, demon, and hairstyle trendsetter. We see him and Randhir Singh following clues to an icon of mystical power, when a party that Bruce Wayne donated to, bought, and paid for is crashed by villains called the Reincarnators?!

Chaos ensues and we get a grand old fight. However, as I mentioned before, this story felt like a bigger part of something. This is one for readers to file in the “To be continued” section of their collective nerd brains.

“The Pennyworth Files”, Chapter 1: “The Fall Of The Scales “

When I read the cover of this strip and saw that it stated in bold comic print “featuring stories with Alfred Pennyworth”, my mind couldn’t help but go back to Teen Titans GO: To the Movies. The joke was made in this film that even Alfred would get a movie before the likes of Robin.

This story once again gives us a glimpse into the life of the world’s most overqualified Butler, as he’s… out shopping? He then stumbles onto a huge underground secret society of lizard people. Even as I’m writing this review, dear readers, it’s making me chuckle. Let’s keep our suspension of disbelief for now, though. Alfred stumbling onto this isn’t even the strangest thing to happen to him in the last few years.

We’re then taken on a journey, following a smart, seasoned actor and former soldier turned butler. He uses his skills, wit, and guile to get to the bottom of a small theft that turns into much more. This was a fun read with pretty good art, it reminded me of Frank Quietly’s style. Of all the stories in this comic I wasn’t expecting this one to continue past this issue… alas, Alfred will follow this thread and we will follow with him.

This story was my favorite in the book. Anyone who knows me reads my reviews or has had the pleasure of hearing me nerd out on any occasion knows: I love all the Robins. This story takes place early on in the crime-fighting career of Tim Drake. We’re thrown into his nightmares about villains and clowns, things that may well scare a young man of his age. Then we see his adoptive father wake him with a cup of coffee (Tim Drake nerds know he loves coffee) and Bruce tells him they have work to do, Bat-Signal shining through the window.

We then head to Arkham Asylum, where a chirpy (not) Detective Bullock’s waiting to begrudgingly brief our crime fighters on the case at hand. Note: I loved the sign for Arkham Asylum on this page. It really just made me chuckle. Once we get into the tale a little more, things start to become clear. The story’s a standard one, but the elements of love shown by Bruce for Tim, and then by Tim for Bruce, are what made me love this segment.

Those of you who don’t believe Tim Drake saved Batman’s life when he was at his absolute lowest don’t know anything about Batman. This story is a great addition to the Robin III legacy, and it was beautifully drawn. 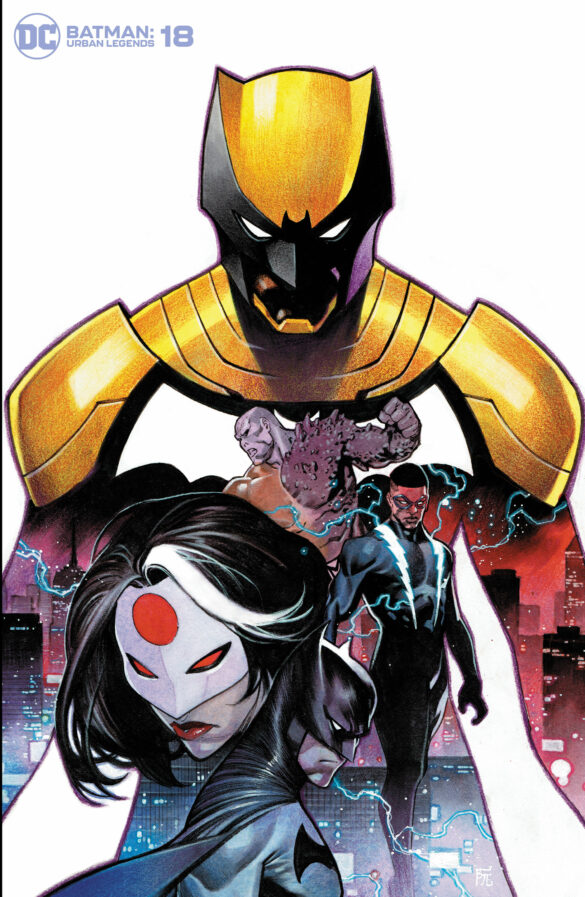 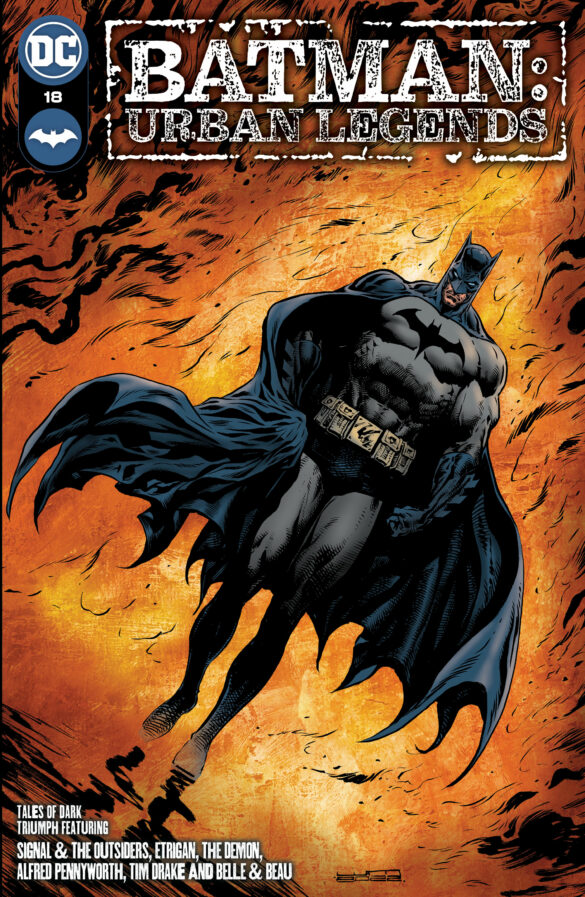 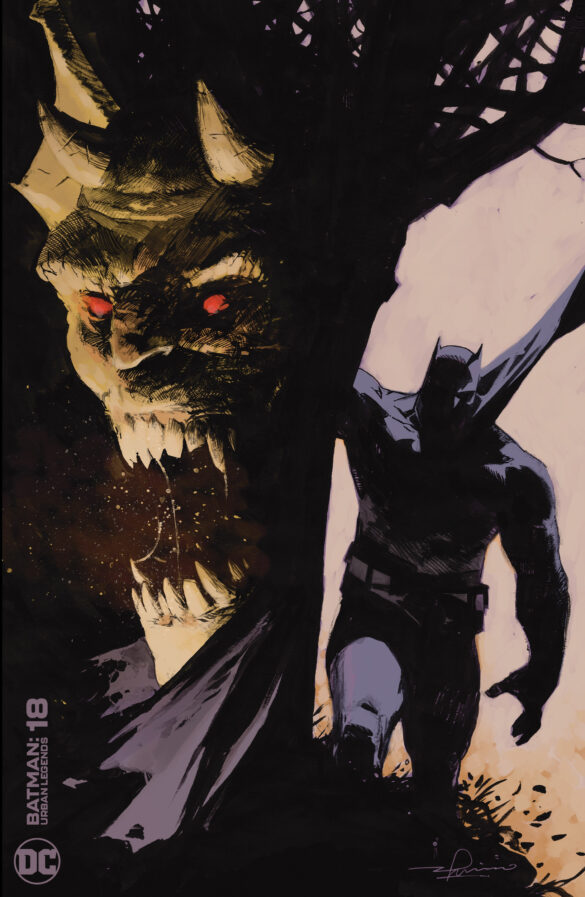 The final tale in this issue was one no one expected… or, dare I say, even asked for.

What we have here is a story about two low criminal-level youngsters, who used to work at the Iceberg Lounge, went out delivering fast food, or went on sprees of robbing villains and flying under the radar. The real question that we’re led to is; if these criminals aren’t hurting anyone – they’re stealing from the bad guys – should Batman stop them? News Flash! This just in: when you steal money from people who just robbed a bank, that money belongs to the bank and the people who have accounts there. Yes, Batman should stop them.

Stealing from thieves doesn’t make the crime go away, it just changes who has the money at the end of it! Rant over. Maybe. The story’s well drawn and does raise some interesting questions, but at the end of the day, it felt like it probably sounded better at a round table meeting than it did in execution. I guess they never expected it to be pulled apart by an angry nerd like me. I don’t know if we’ll see these characters again, or if we even should.

Batman: Urban Legends #18 shows us a lot of the characters associated with the Bat family who don’t currently have an ongoing title, and are sometimes forgotten about. It was a very enjoyable issue that really evoked a lot of different emotions from me. If you’re looking for a spot to jump back into Urban Legends, then this is as good a place as any!