“Cold Shoulder”, “The Sea Beyond”, “Statecraft”  and “On His Worst Nights” 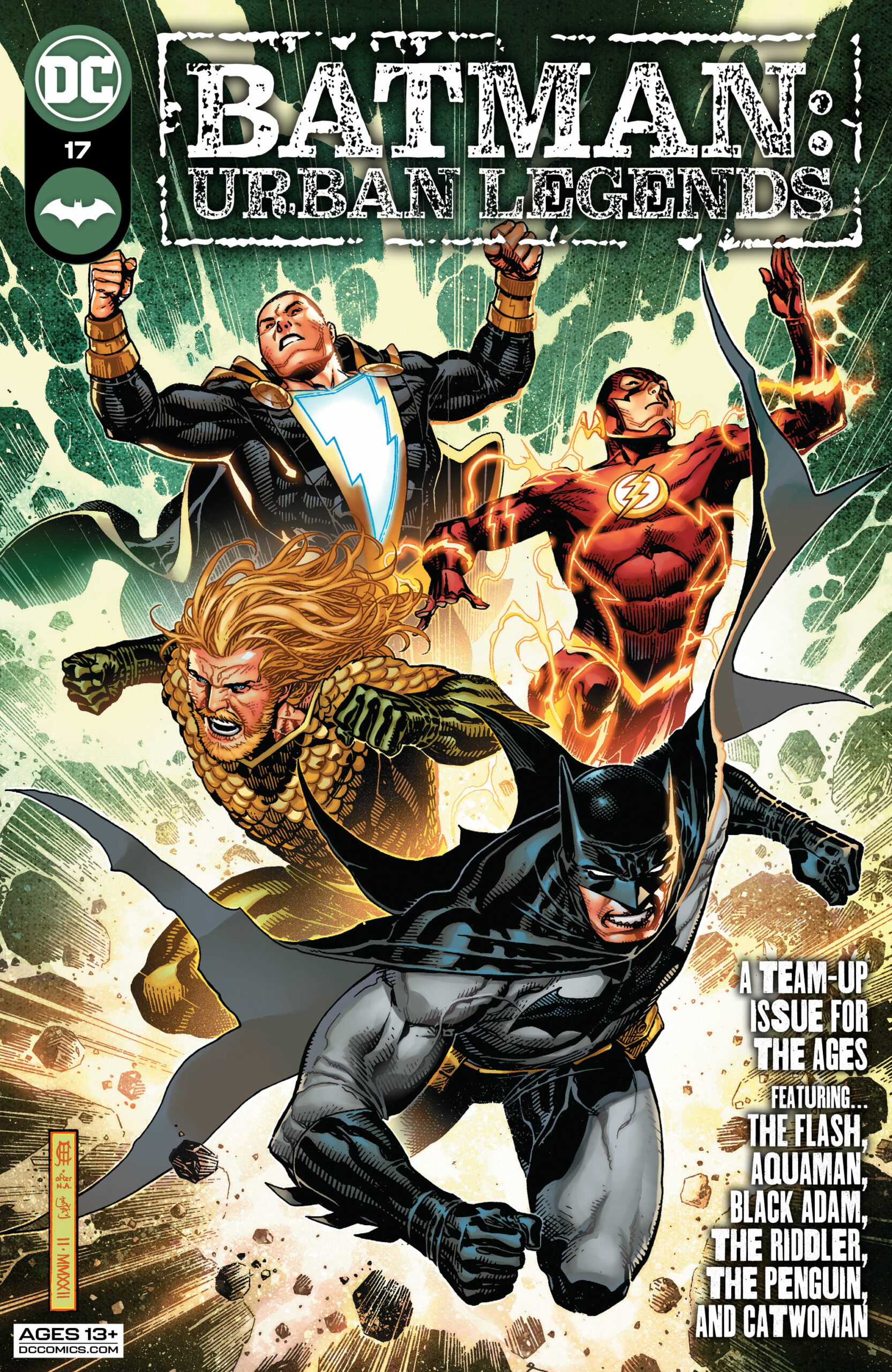 Batman: Urban Legends #17 is a huge superhero team-up comic, the likes of which we haven’t seen since The Brave and The Bold! There’s a speedster, Atlanteans, Black Adam… and more!

The first story in our all-star team-up issue, sees The Dark Knight joining forces with the Fastest man alive, to thwart a caper by the coldest crooks around (trademark pending on that name – JA) Mr. Freeze has enlisted the services of Captain Cold in his scientific caper to try and revive his wife.

I loved this story. I should note all the tales in this issue take place in the past, as of the Justice League’s current situation (See Justice League #75 and/or Dark Crisis #1). That did hinder the suspense just a smidge as we know that these situations will have no fatal consequences, BUT! they may plant the seeds for stories to come in the future. 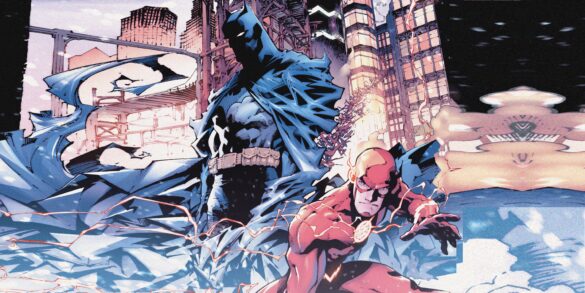 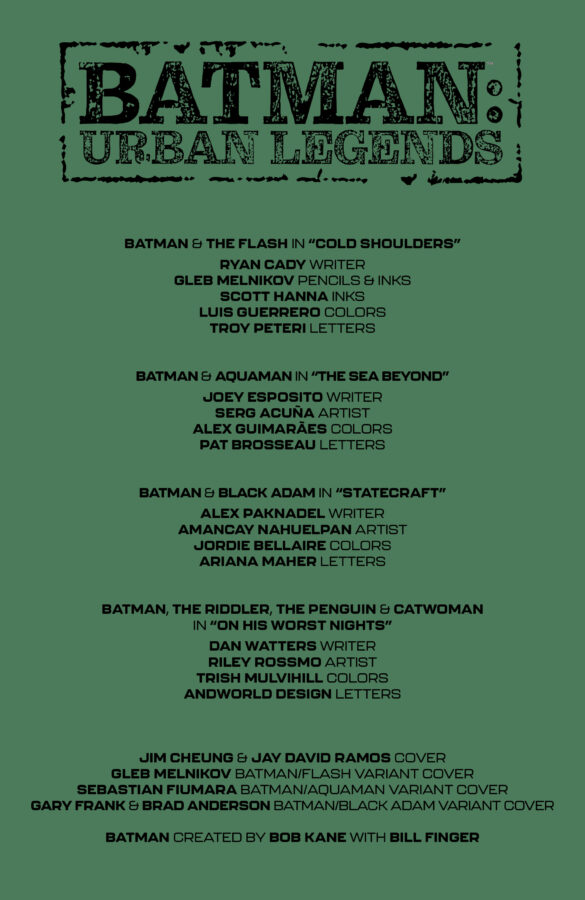 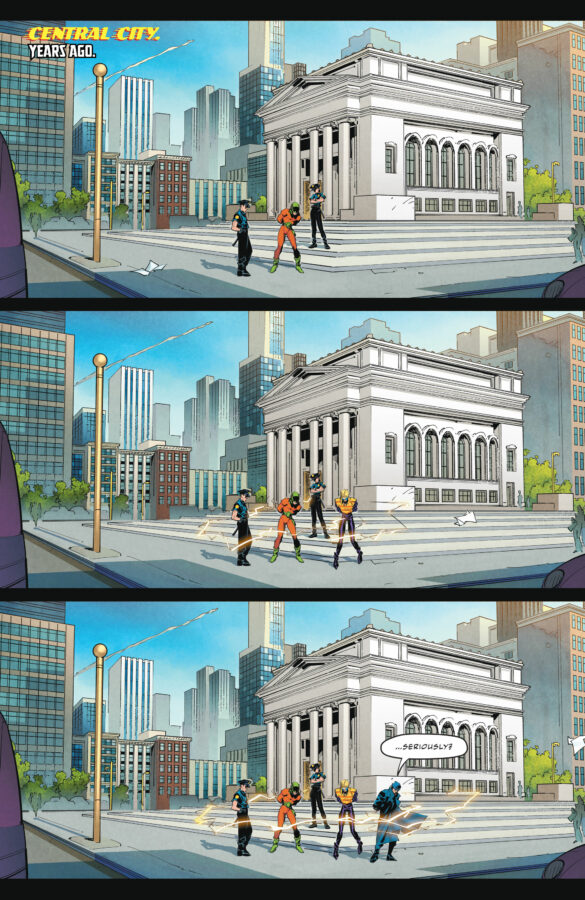 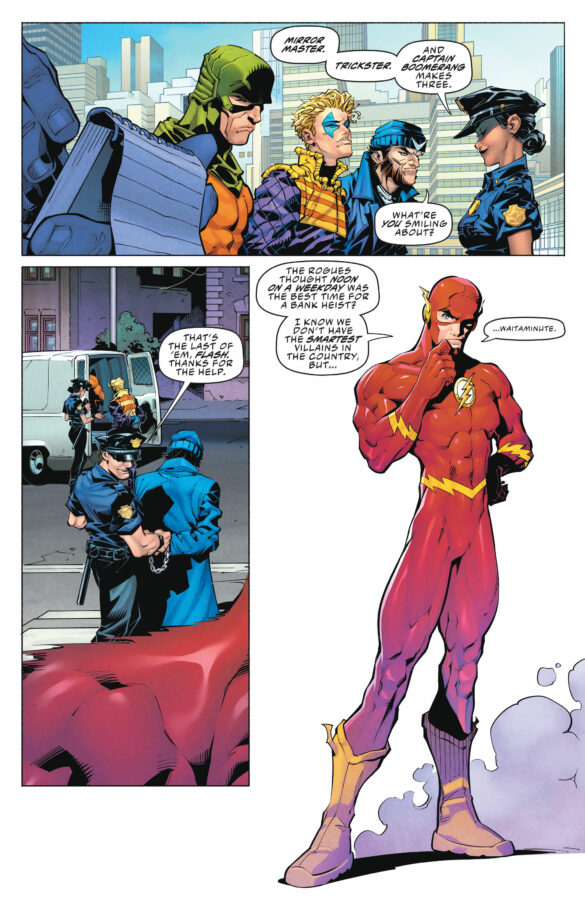 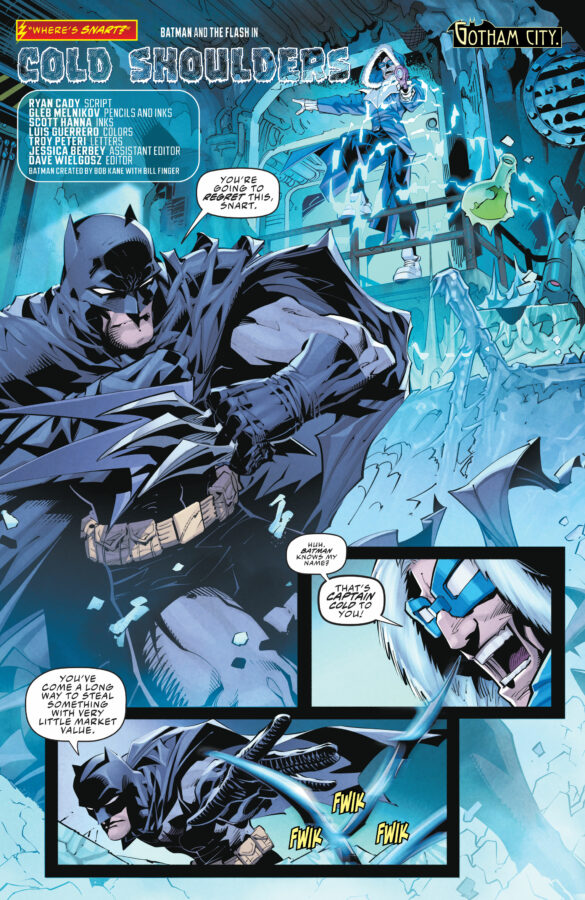 I really enjoyed seeing Batman and Flash being detectives together; the World’s greatest detective and a foremost CSI should be able to track down any villain on the run! Not to mention the Flash can search a million miles in a nanosecond! It was also great seeing the Cold villains together; Mr. Freeze, a brilliant scientist trying to find a cure for his wife, and Captain Cold; a skilled thief with a code of conduct. They clash, even though they both use Cold guns to take on superheroes, it was really enjoyable to read with great art. I’d love to see an ongoing Batman/Flash story after reading this.

What could be plaguing the King and Queen of the sea? What would require them to ask for Batman’s help? When this story starts, it gives off a really cool “Oh my goodness, no way!” moment. As soon as that moment is over it sinks into the strangest obscurity that has no real connection to the element that got me excited about the story! I was quite sad to find out that the McGuffin of this story was exactly that, an element to bring the heroes together and nothing more, the threat they would face is something entirely different.

The art was great, though I was a little sad not to see bearded, long-haired Aquaman after he was on the cover of the book. I got over it, even though Mera did look a bit like a mad Disney character, but that might just be because her eyes were drawn slightly bigger than usual.

All in all, without giving anything away, this story started with so much promise and delivered something I wasn’t really in the mood for. It may be more your cup of tea, though.

These types of stories were inevitable, particularly with a big-budget Black Adam movie coming out soon. Having the character appear in as many books as possible and becoming closer and closer to the Dwayne Johnson portrayal was bound to happen.

This story takes us back to an unnamed Geoff Johns era of Black Adam. I’m unsure if it’s during Doomsday Clock or 52, but those were the vibes I got. We have Batman acting like a drunk at a pub, who wants to fight everyone he doesn’t like, zooming on over to Khandaq to take on a God-level hero. Bruce, what has Alfred been putting in your tea? With a nice little cameo from Hawkman (who will be a big part of the new movie) warning Bruce against this fight, the Dark Knight goes anyway.

So, a fight ensues, and Black Adam acts like; you guessed it: a pro-wrestler saying he can defeat the Bat-champ even without his powers. I need to re-read a lot of DC but when did Black Adam – sans powers – become a Batman-level fighter? Who knows, but it felt like this story was aiming to show us that Black Adam is tough (we already knew that) and he’s not the murderous villain Batman (and the audience) thinks he is anymore. Not to mention, he even visits sick children in hospitals.

The art was great, but this felt more like a plug than a story we genuinely wanted/needed. Give me another Justice Leaguer vs Black Adam with his powers – in movies and comics, then I’ll be happy. 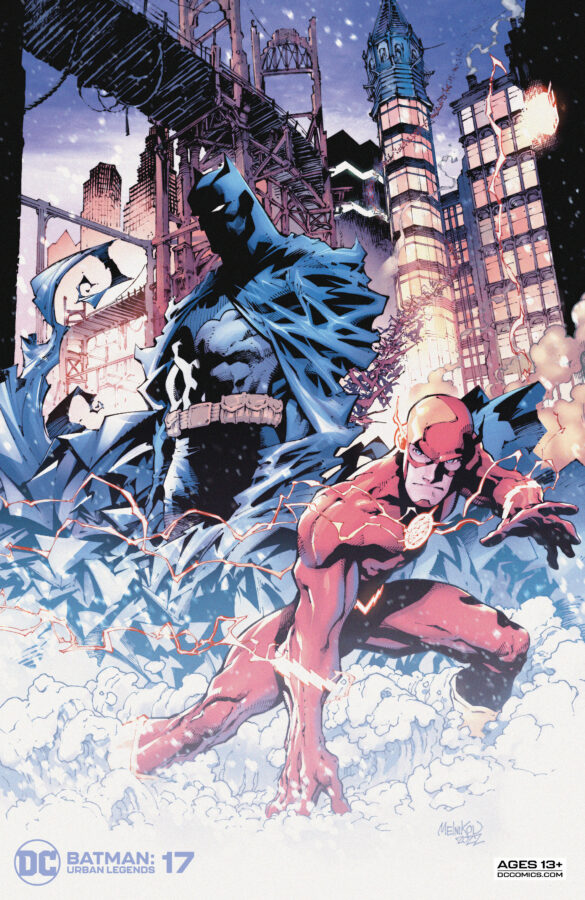 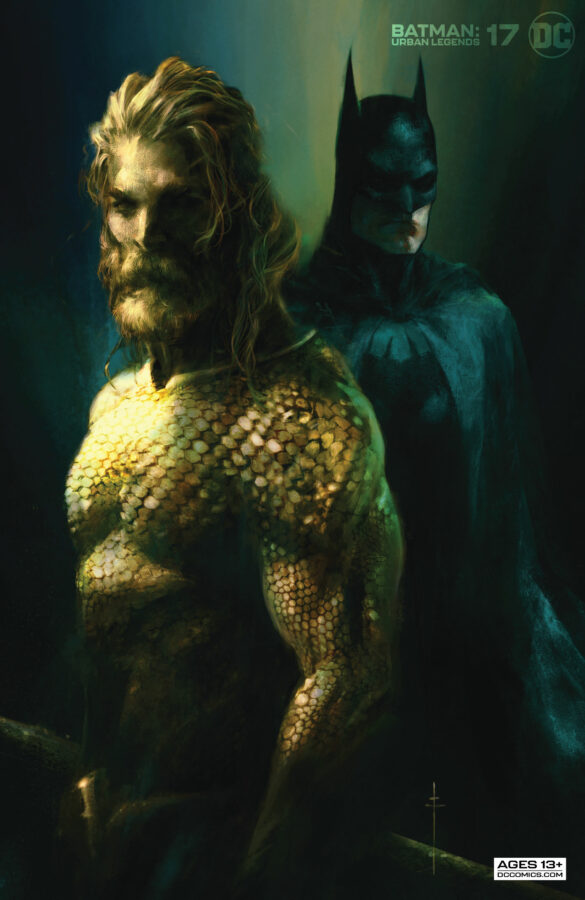 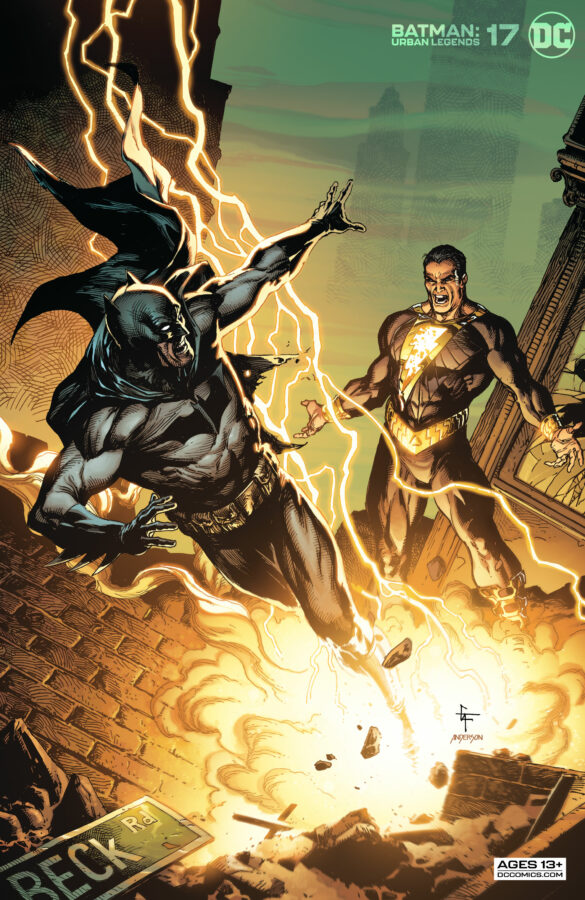 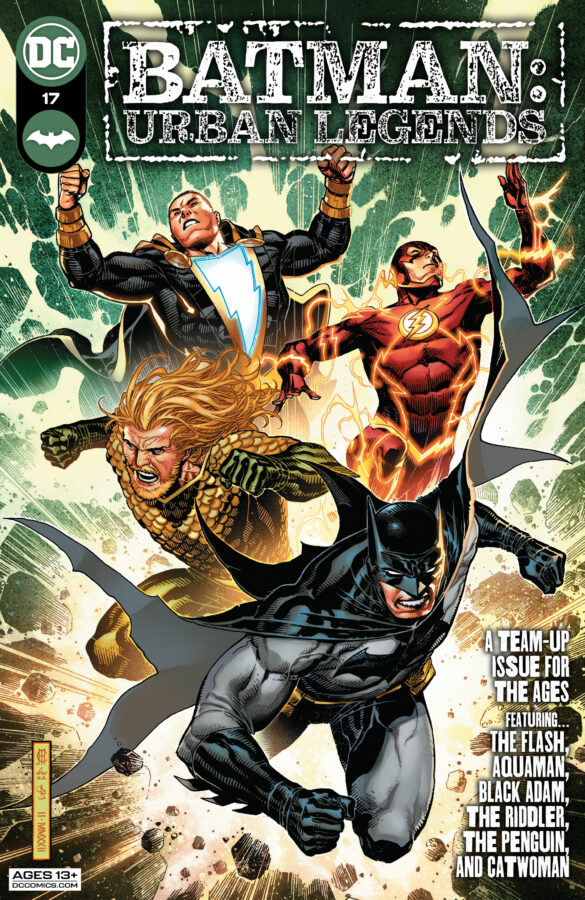 “On His Worst Nights”

This story was an unusual one, and after reading it I felt like I’d missed something, or that I was unfulfilled. Thinking on it, though, maybe that was the point. This is a Riddler story that’s written to show how smart the character is, and why he leaves clues, hints, and riddles for a detective or the police to find. Because he can!

If the Riddler’s as smart as he says then would he really ever get caught, or would he not be able to evade capture. He gives his opponent a crutch, so they can get to be on his level. This story shows Riddler predicting Batman’s every move from start to finish. This is a must-read for fans of the talented Mr. E Nygma.

Batman: Urban Legends #17 felt like a collection of Brave and the Bold stories of old, with unlikely team-ups and unusual stories for fans of all types. I can’t wait to see how the next issue goes and who’s going to feature!

George Clooney’s ‘Batman and Robin’ Suit is for Sale