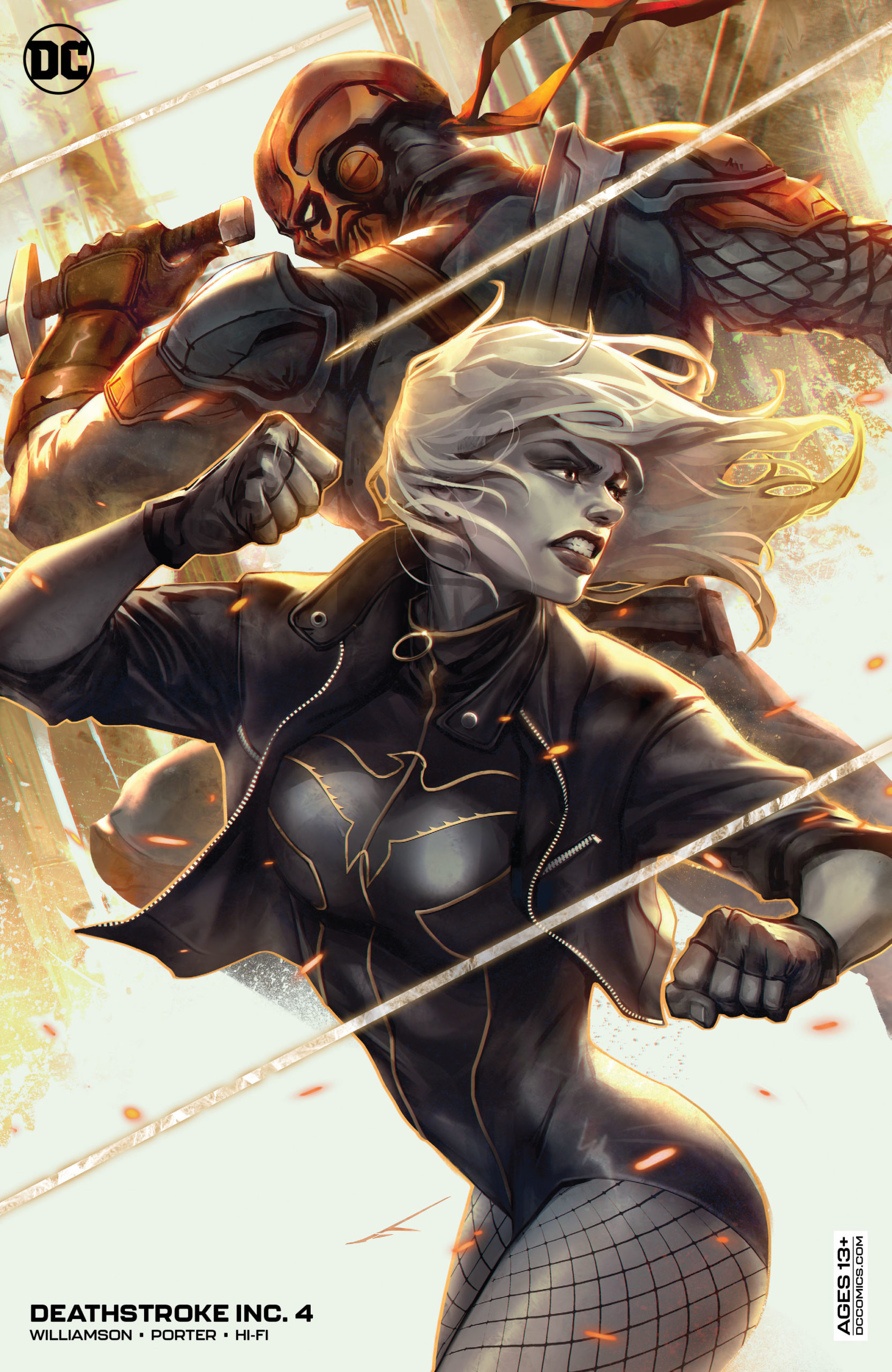 For weeks, we’ve had questions and now, in Deathstroke Inc. #4, we get answers! In an issue chock full of twists and turns, we finally find out what the T.R.U.S.T. organization is up to and why they recruited Deathstroke and Black Canary to the team.

This review contains quite a few spoilers for the issue and the series itself. Stay up to date with our previous reviews! 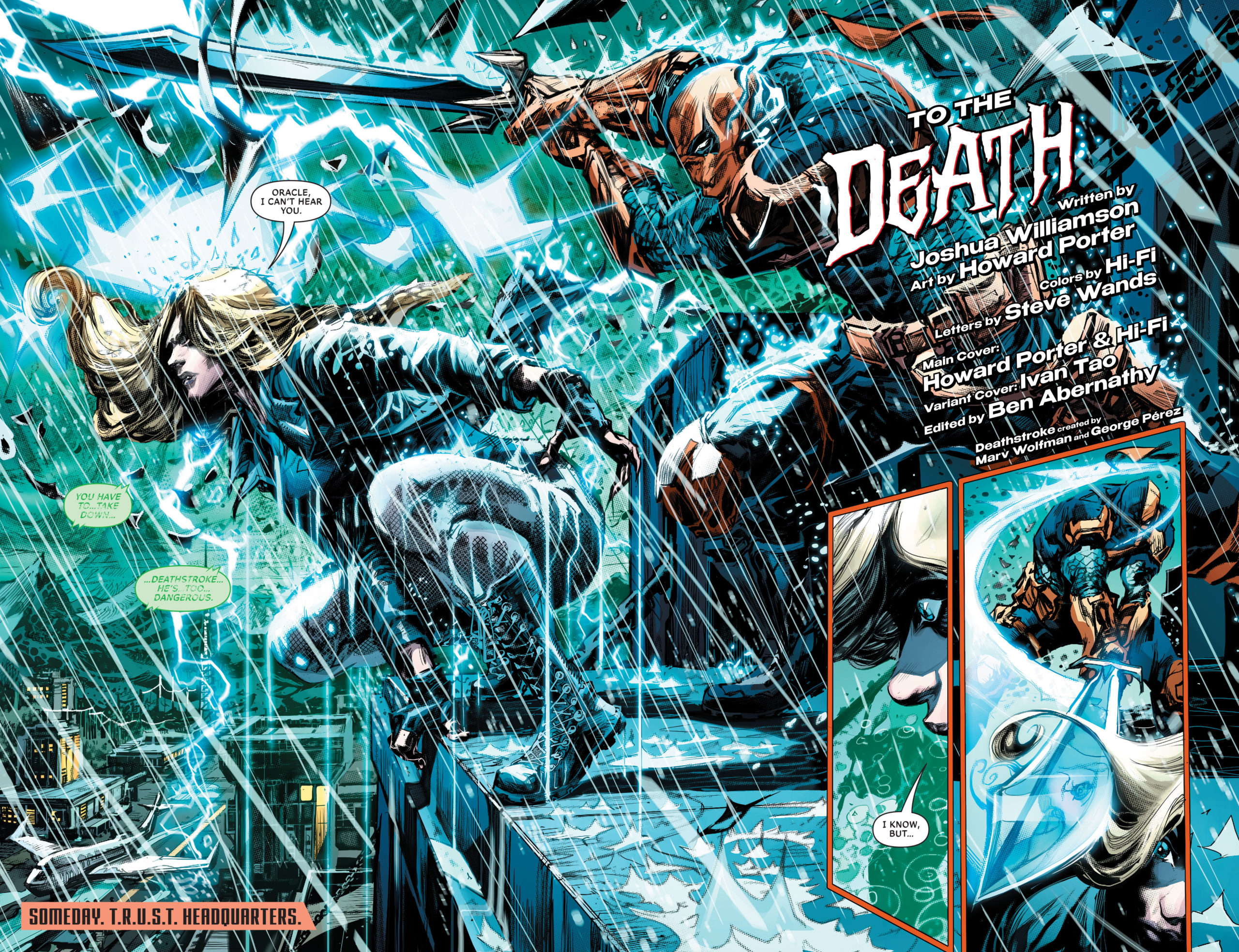 Unlike other chapters in this series, Deathstroke Inc. #4 picks up immediately where the last one left off, with Black Canary in the pouring rain. A sudden flash of lightning reveals Deathstroke nearly on top of her, blade drawn. Every frame of this scene is fluid, stunning, and incredibly slick. The colors completely encapsulate a heavy thunderstorm while emitting enough light for us to see the protagonists’ duel.

As our heroes face off in the pouring rain, they confront each other about their involvement with T.R.U.S.T.  Black Canary knew from the beginning that they’re not to be trusted (ironically). Deathstroke, on the other hand, was blinded by Cheetah telling him that the organization was not what it seemed. As mentioned before, Slade was trying to put good out into the world to somewhat make up for his villainous history, so learning that he was still doing wrong hurt the anti-hero deeply. He even took off his mask, something he only does in moments of vulnerability, and initiated a truce with Black Canary.

Dinah and Slade famously have not gotten along, a running theme even in this series. Their cooperation to try and take down T.R.U.S.T. shows how desperate and impacted they each must have been by the betrayals. The protagonists promise that they’ll continue to duke it out later, but only after they stop T.R.U.S.T. and Juliette Ballantine.

Things go decidedly south from this point in the issue. Immediately after Deathstroke and Black Canary go back inside T.R.U.S.T. headquarters, they’re met by Ballantine and Hiro. It’s unclear at this point if Hiro is aware of T.R.U.S.T.’s true intentions, but based on his behavior in other issues, I’d bet he isn’t. There’s an intense fight and the appearance of DC’s baddest team, needless to say, this issue is pretty fast-paced and it’s somewhat difficult to keep up with. While the writers gave us some answers about what T.R.U.S.T. is doing and why there still appears to be a greater danger than has yet been revealed.

The art in this series has been fairly consistent, but for me, there’s one character whose appearance has been a bit off every time. The purple-haired super villain Juliette Ballantine has a bit of an odd face. Drawing humans from different angles can be difficult, but with Juliette, it’s to the point that she almost looks like a different person from panel to panel. The one connection is her purple waterfall of hair. While this is a cool identifying feature, I still wonder why this was chosen as Ballantine’s appearance. It somewhat clashes with her Libra costume but does pop in most of the issues.

Each character in Deathstroke Inc. does have a unique color palette as a result. Deathstroke’s is obviously black and orange with some pops of white or silver when he removes his mask. Black Canary’s blonde hair is often a vibrant yellow paired with the blacks and blues of her costumes. Ballantine rules in purple, even wearing a matching suit at the beginning of this issue. Hiro has yet to show what’s beneath his trench coat that he perpetually wears, but it’ll likely be a color that none of the other characters feature.

Deathstroke Inc. #4 is mostly a transitional issue. While these are important in the overall arc of the series, that means that it isn’t the most exciting. The plot is pretty basic and doesn’t stand out. The fast pace is fun and it’s great to understand more of the canon of DC and this title, but transitions can only get you so far.

Next week’s issue is almost sure to be more intense (especially with that cliffhanger ending). Hopefully, we’ll learn more about Ballantine and T.R.U.S.T.’s exact purposes for Deathstroke. At the very least, we’ll probably get to see Ballantine/Libra make more puns about balance.