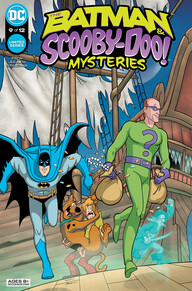 As the holidays approach, DC has gifted us The Batman & Scooby-Doo Mysteries #9! This issue was really Batman light and filled with the Mystery Gang, but was that really for the better? Read on to find out!

We recommend catching up on previous issues of this comic before reading the review below.

Those who have been keeping up with my reviews of this title know that all I have wanted is more Scooby-Doo content. This issue seemed to promise that even from its cover. A pirate ghost, secret hidden treasure, and puntastic side characters? It seems lined up to be a typical adventure for Mystery Inc. I set myself up for disappointment, however.

This issue did not deliver the Mystery Gang content that I was hoping for at all. While the reality of ghosts was successfully disproven, the wit and references that you expect from a Scooby-Doo story were absent. There were no cries of “jinkies!” or “my glasses!” present in these pages, and I was a bit let down.

Additionally, the flow of the story seemed a bit off. There’s a lot of setup of the treasure hunt from the beginning, with an unnamed woman receiving a ton of frames and speech bubbles. It takes some time for the mystery and adventure to actually begin, and then when it does, I get confused. This comic’s supposed to be about Scooby-Doo and his crew (plus Batman, who doesn’t appear until the last page), but there’s a lot of time given to the slapdash joke characters; New Hampshire Smith (a dull Indiana Jones knockoff) and “Next” Jen Device (a monochromatic tech wizard with bad fashion sense). My favorite character included in this issue was the Riddler, but I was even let down by him because of the art style!

The art and coloring of this issue were so sad for me. There have been some wonderful panels in previous issues that I’ve really enjoyed (remember when the team went to Venice? Lovely), but I’m concerned with this one. First, the scenery and perspectives of the whole issue seemed off. It seemed like this was more the storyboard and not the final art. Even the cover’s strange. I’m pretty certain also that the Riddler on the cover was pulled from an inner panel and wasn’t drawn into the scene itself (the same goes for Scoob and Shaggy).

Speaking of the Riddler, his design was… strange. The drawings of his profile were so inconsistent and looked plain wrong at times. Does the Riddler really have a flat forehead and face? I swear it was approaching concave in some panels. Facial expressions for the Riddler and others were also different. They didn’t make sense anatomically at times. I don’t know how to explain it more than that, but so much was left to be desired in this issue for me.

Last time I had issues with the coloring, as everything was overly saturated and a bit nauseating. While this comic is often brighter than reality would be, the visuals don’t feel right this month, either. The colors are usually a bit softer than this one. The brightness is there to remind readers that this isn’t a serious comic, but having them be so punchy just makes the whole thing difficult to read.

My only positives in this issue were related to the Riddler, as this is a villain I delight in. Edward Nigma is all cleverness with a side of laughter. He’s an interesting foil to the Joker since he seems to take things a bit more seriously while still enjoying himself.

Rather than feature Batman himself, the Riddler got to be Mystery Inc.’s partner for this journey. This, of course, led to some fascinating dynamics. Although he’s a supervillain in Gotham, a team-up between the Mystery Gang and the Riddler doesn’t feel too ridiculous. In fact, there are no crimes in this issue aside from a reference to past behavior. Unsurprisingly, I loved getting to see Velma and the Riddler try to outsmart each other. Any time that characters get to display their cleverness or shrewdness, I enjoy myself and feel represented on the page!

The Riddler was a great choice for this issue, if only because it was otherwise a bit dull. Putting in one of the most enigmatic and relatively sane Batman characters was a wise move. Unfortunately, it wasn’t enough to save this issue.

I hate to say this about any comics I read, but I was bored with The Batman & Scooby-Doo Mysteries #9. The issue had a lot of potential, but I think a few characters needed to be cut and the art needed to be modified to really make it work. Plus, if you’re going to go down the pirate and ghost route in a crossover comic, you need to give the majority of the action and story to the characters with the most experience in those realms.

Another month goes by with me being disappointed by the way that Mystery Inc. is being portrayed. I can’t say I’m surprised, but I do feel let down. I don’t get what the point is in creating a crossover series if you aren’t going to pull equally from both the original source materials, or at least take advantage of the few times where you can go full ham on one of them?

We’ve got three issues left in this series and if they’re like this one, I sadly won’t be sorry to let it go. I’m holding out hope however and I’m still on the edge of my seat for next time! What are your thoughts on this issue? Is my harshness warranted? Let me know.