“Ghost on the Water” 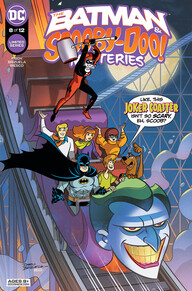 I can’t believe that this series is nearly over! The title hasn’t been quite what I expected it to be, but The Batman & Scooby-Doo Mysteries #8 has really delivered on typical comic book shenanigans. Featured villains Harley Quinn and the Joker finally appear together and it goes about as well as you’d expect!

This issue doesn’t connect to previous issues of the series, but I’d still recommend catching up on the rest!

This issue heavily featured orange. From backgrounds to decor to a secret villain appearance by Dr. X, it’s pretty hard to miss. Honestly, I don’t know why color artist Franco Riesco went so hard on the orange, but it’s a bit strange to look at. This might be a tie-in to the title of this issue, “Ghost on the Water” as the ghost had an orange essence and glow, but it’s still a very different choice.

The lettering was very different in this issue too. There was quite a bit of signage throughout the story as the characters were visiting the different waterfront areas of Gotham City (did anybody else catch the reference to writer Sholly Fisch?) Each location had a distinctive name and particular typefaces. In my opinion, this made each storefront and restaurant look a little out of place in the story. Perhaps this issue doesn’t fall under the lettering department, but some of the speech bubbles were a bit off again in this issue as well. The effects lettering for this issue was fantastic, though, as there were many sound and action effects across the issue.

Callbacks were in abundance! None of them were really references to the series itself, but they did refer to the canon of both Batman and Scooby-Doo. The Mystery Machine finally reappeared at the beginning of the issue, which is always welcome! A glowing ghost quickly confronted the gang, and this excited me because I really hoped it would be a villain from the Scooby-Doo universe. Mystery Inc. quickly avoided a confrontation with the ghost as Batman swings into action.

The heroes discussed the ghost outside a building development owned by “JH Development”, whose slogan is “THE SMILING NEW FACE OF GOTHAM”. Every clue definitively pointed to the appearance of the Joker and Harley Quinn in the usually obvious style of Gotham’s most notorious villains. The owner of “JH Development” is even revealed to be Jolene Harker (cue the Dolly Parton music),  a clear anagram of Harleen and Joker. The entirety of the villains’ story feels super cheesy but in that most familiar way of the Batman comics of yesteryear.

The development site turns out to be a theme park styled after the Joker in various aspects. However, a mystery being solved in an amusement park feels very reminiscent of many of the Mystery Gang’s adventures! I can remember a good few Scooby-Doo episodes or movies from my childhood that revolved around carnival or theme park solves.

Finally, I felt like the dynamics between Harley and Joker felt as toxic and complicated as ever. While I hate seeing Harley get tripped up and tricked by the Joker, it’s nice to see the characters be their full selves. Perhaps their jail time after this issue will help them overcome some of their clinging tendencies!

Despite this issue feeling frequently familiar, there were some oddities. Firstly, Batman interacted with the police but not Commissioner Gordon. The police officers prevented the mystery solvers from investigating the construction site further, which seems appropriate. However, based on how the police often interact with Batman, I’m surprised they didn’t try to arrest him. You’d think the officers would at least reprimand the Bat for his vigilantism.

The next strange occurrence was when Batman confronted the construction workers of JH Development. Obviously, the henchmen worked for the Joker and Harley and struck first. However, I was a bit shocked when Batman grabbed one of the men and used him as a club against the others. Bruce Wayne can fight crime however he wants, but this seemed a bit extreme! This didn’t really seem to match Batman’s usual philosophy on saving the day? Am I wrong?

To top everything off, one of the henchmen live-streamed Batman beating up the baddies. Commissioner Gordon called the Bat off via video call. What decade is this series taking place in? It’s still something that seemingly hasn’t been cemented and bugs me. I guess it’s current, but then you’d think other details would have been updated? Character appearances and costumes? Or something?

The other main strangeness I noticed was a detail about Daphne. She tells Shaggy emphatically that he knows she loves word puzzles. Since when? I’m not doubting Daphne’s intelligence, but this tidbit seems random, at best. I’ve never seen Daphne interested in puzzles other than the Gang’s mysteries in any iteration of Scooby-Doo. Daphne has always been capable and one of the strongest characters of Mystery Inc. in terms of physicality, but she’s never really known for her mind. Even when she’s recognized for her intelligence, it’s never been in relation to word puzzles.

I’m just unsure about this time around. The Batman/Scooby-Doo Mysteries #8 had a lot more violence (to some extent) and shenanigans compared to the previous issues but didn’t go for any level of accuracy or depth in the madness. The series doesn’t seem like it takes itself as seriously as I’d prefer it to, this chapter especially. The secondary villain confused me a bit, and things were organized differently throughout the story, compared to earlier installments. Overall, this issue was very middle of the road for me. I’m glad we got to see Harley Quinn but the story got a bit convoluted once again. I felt there were more callbacks to the Scooby-Doo canon, but not necessarily things we already knew.

I’m giving up hope for true callbacks to the Scooby-Doo stories at this point! We only have a few more issues left in this series, so it just seems unlikely to happen. The next issue should be interesting! Keep your eyes peeled for my next review, especially since there’s just a couple left!

How did you feel about this go around? Are there any details you noticed that we didn’t mention? Drop us a comment below!