The cosmetics company Revolution Beauty has launched a brand new make-up range inspired by characters from DC Comics and it does not disappoint.

The four smaller eyeshadow palettes each have 9 colors, each of which has a name relating to the character that the palette is based on, for example, the “Batman” palette has colors named Gotham, Dark, and Night. The “I Am The Batman” palette (small) has the Batman logo in gold and silver bats on the packaging. The eyeshadows are mostly darker tones (brown and 1 black) but there’s also a yellow one, to lighten things up.

The palette is a mix of matte and shimmering colors to add a bit of sparkle and six of the eyeshadows also have the Batman logo embossed in them.

The “Harley Quinn: Daddy’s Little Monster” palette has Suicide Squad packaging, four matte, and five shimmering colors. These contain a mix of bright and pastel in various shades of pink and blue, plus there’s a shimmering white and mint green. The four matte hues have the Harley Quinn Suicide Squad logo embossed in them.

The Catwoman palette “Jewel Thief” comes in black glitter packaging with the Catwoman logo in matte black. The colors are a mix of neutral and jewel tones in shades of gold, purple and green, plus two matte and seven shimmers. The matte shades have the logo embossed.

The Joker “Why So Serious” palette comes with packaging covered with HA HA HA and the Joker’s maniacal smile. The colors in this palette are by far the brightest. There are six matte – which have the Joker’s face embossed on them – and the colors are bright green, orange, yellow, red, plus two neutral shades of cream and brown. Also included here are three shimmering tones in black, dark silver, and navy blue.

I myself have purchased all four of the smaller palettes, and they’re so fantastic! The packaging looks great and the colors in all of them are beautiful and vibrant. You can also easily mix and match colors from different palettes to create different looks. 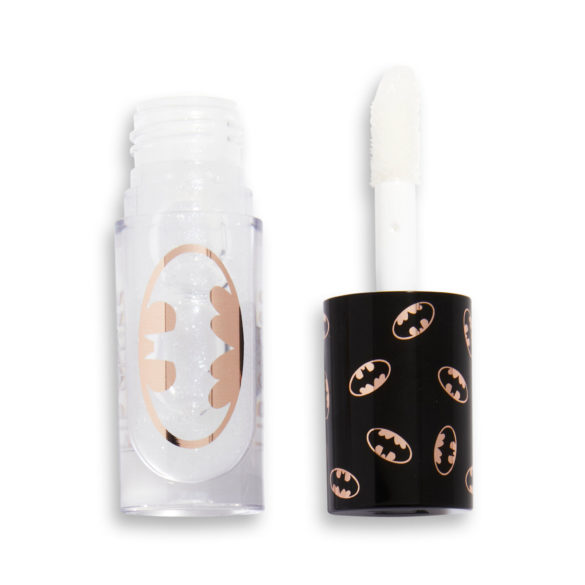 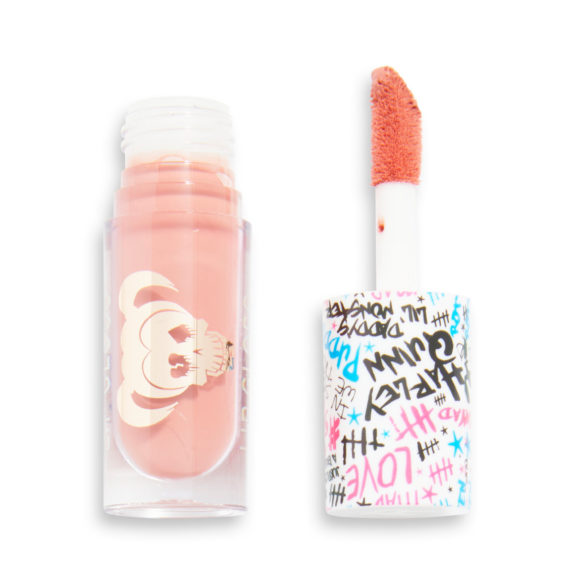 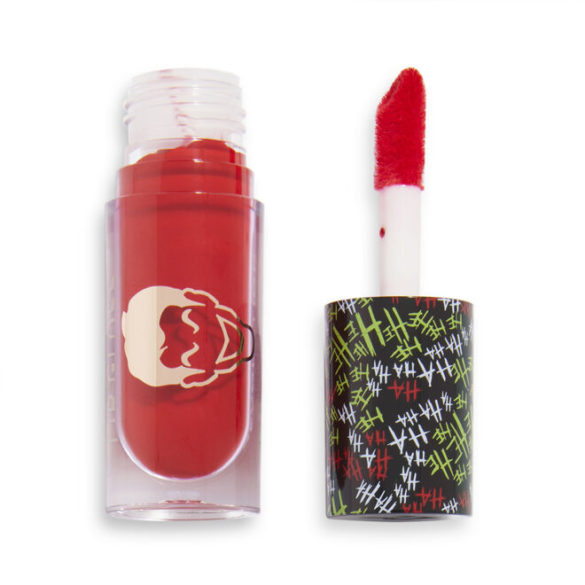 The DC large shadow palette comes packaged in a case with Gotham city on the front and has the words “Welcome To The City” written in rose gold inside the sleeve. The palette includes 24 daring shades of eyeshadows, highlighters, and blushes, including mattes and shimmers, some embossed with the iconic DC logo.

There are three lip glosses in the range Batman Vengeance which is a clear gloss with glitter, Harley Quinn’s “What, You Think I’m a Doll?” which is a universal nude gloss, and “The Joker Smile” which is a matte red gloss. The glosses have a lovely velvety feel once applied, but due to the fact that they have a larger applicator than most other glosses available, they can be a bit messy, so it’s best to apply a tiny bit at a time. The Joker gloss is definitely my favorite, it’s so bright and vibrant and looks amazing once applied. 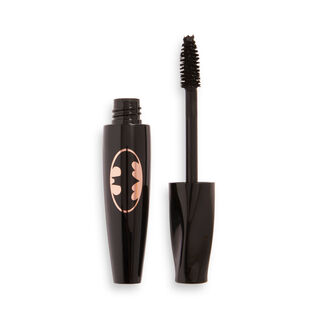 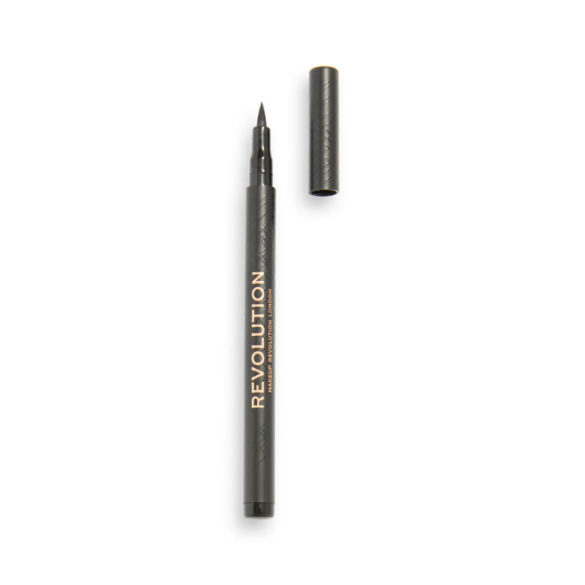 The Catwoman “CATEYE” eyeliner is a jet black liquid ink pen for precise precision. I can honestly say this is one of the best eyeliner pens I’ve ever used, it glides on so easily and it is also easier to remove than some other eyeliners which is a bonus. The Batman “I Am The Night” mascara is a fast-drying, jet black, volumizing mascara that has a wide-angled tapered brush for easy and even application. The mascara comes in a black tube with the Batman logo in gold. This is a really good mascara, it makes your lashes look fuller and longer and it looks really great with the Catwoman eyeliner. 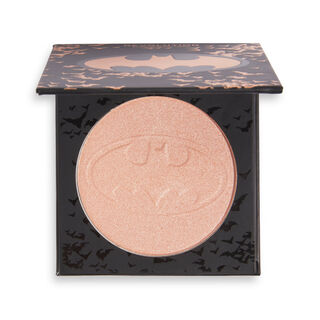 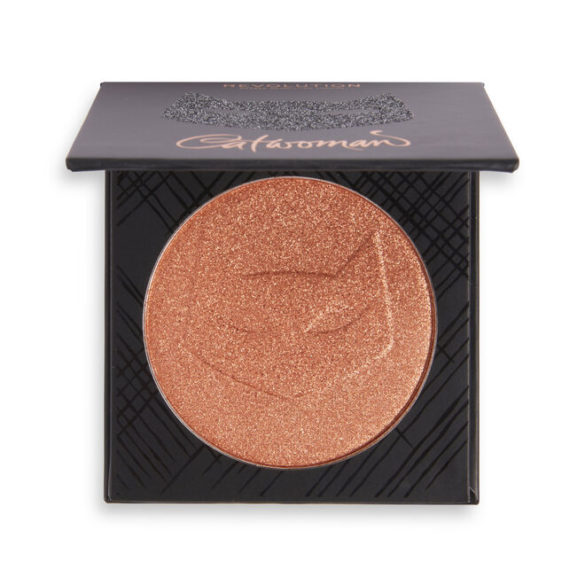 The Joker “Put On A Happy Face” brush set comes in a collectible tin which is a black matte with HA HA HA and The Joker written on the tin. The set includes five brushes which are a mix of face, eyeshadow, and creator brushes. The brushes have super soft bristles with a red to green ombre effect, rose gold ferrules, and black handles with the HA HA HA print to match the tin.

The Batman handheld mirror has the logo with a black plastic handle. There isn’t really anything special about the mirror other than the fact that it’s shaped like the Batman logo. I was quite surprised when it arrived though because it is quite a bit larger than I expected it to be.

Catwoman’s false lashes come packaged in a black glitter box shaped like the Catwoman symbol. The lashes lengthen and volumize for a sultry feline effect. The glue for the lashes isn’t included and has to be bought separately which is slightly disappointing. 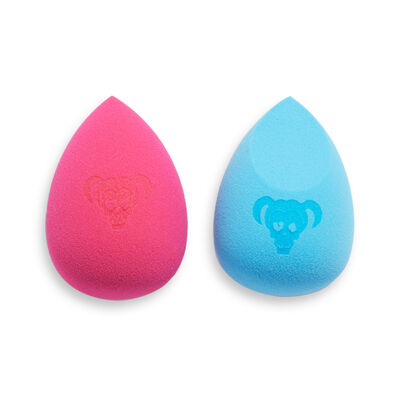 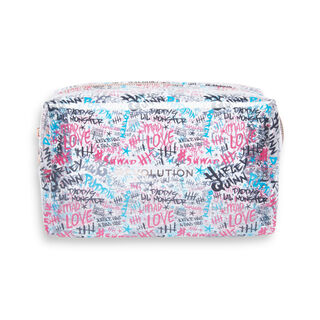 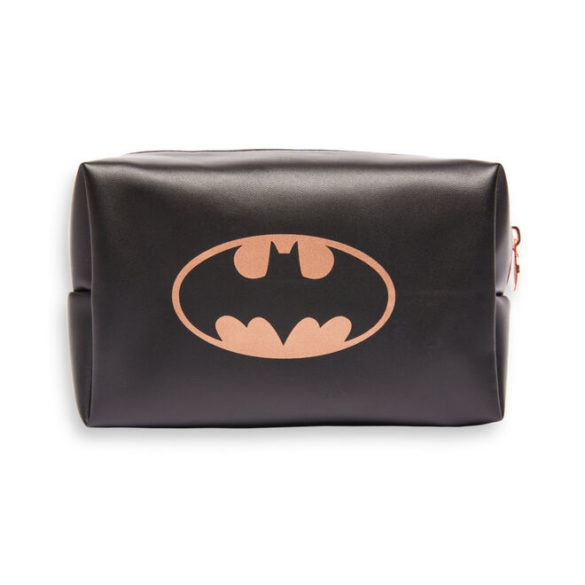 The Harley Quinn “What We Are, Bad Guys” make-up sponge duo includes one pink and one blue, both of which feature the Harley Quinn Suicide Squad logo. The last two items in the collection are cosmetics bags. The Harley Quinn “Puddin'” makeup bag is a see-through bag featuring graffiti-style Harley Quinn slogans and her best quotes.

The Batman makeup bag is a matte black design with the Batman logo in rose gold.

Over the past few years, various companies have released collections based on Wonder Woman, so it’s really nice to finally see some more DC Comics characters get the same treatment. Smash Box has also released a small collection based on various characters from the new The Suicide Squad movie, but there are only five cream eyeshadows and five lipsticks in their collection, and they’re much more expensive.

This collection from Revolution is so much fun and affordable, and I’m really hoping that they expand the line to include more characters. I personally think that a Poison Ivy or The Riddler would have made really good eyeshadow palettes with various shades of green. I also think that a range of lipsticks and lip liners would have made a nice addition instead of just having three glosses.

All products from Revolution are vegan and PETA-approved.